The human body wasn’t meant to be so sedentary. Our ancestors weren’t spending 10 hours a day sitting around, but we do. And it takes a toll on our bodies. Some people try switching over to a standing desk, others spend thousands on some kind of fancy chair, and some use pain pills and work through it. But there are some better options.

What if a Band-Aid was more than a Band-Aid? What if we had something as simple as a Band-Aid that could heal much more than a little scrape? Though it would require technology a little bit more sophisticated than a piece of cotton taped against your skin, that kind of healing patch would be quite useful, wouldn’t it?

Billing itself as the future of pain relief, the Kailo is a Nanotech Patch which is supposed to be designed based on an electrical understanding of the human body. Human bodies use electrical currents to communicate between the nervous system, body, and brain. It’s a part of what makes it possible for us to move, speak, and think. 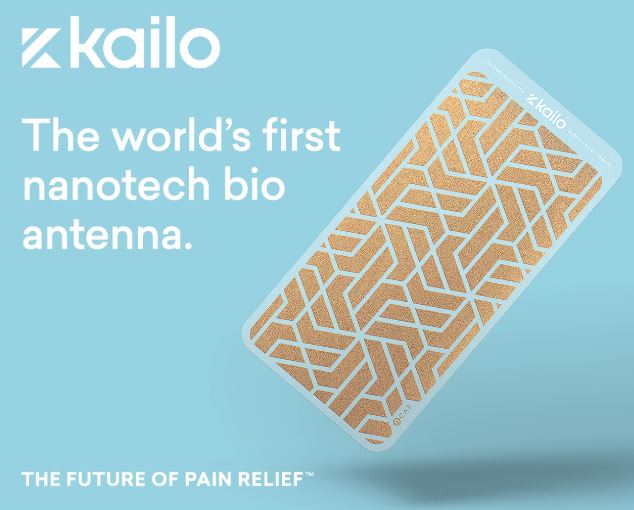 But rarely do we make any attempt to actually manipulate or interact with those electrical systems in medicine. The most notable exceptions relate to acupuncture. The Kailo is an exception. It’s a sort of non-invasive, non-consumable, reusable healing patch that’s supposed to start working within seconds. That makes it a far more natural alternative, especially compared to some of the more common alternatives. It’s certainly faster and less invasive than acupuncture.

While you’re wearing the Kailo Nanotech Patch, it’s designed to interact with the electrical system within your body due to each patch being made with several billion nanocapacitors. Those work to serve as a sort of bio-antenna, which is supposed to help the body communicate electrical signals better. The end result is a reduction in the signals that cause pain, a faster recovery, improved flexibility, and the ability to regain a more natural range of motion. But how well does it work for different things? 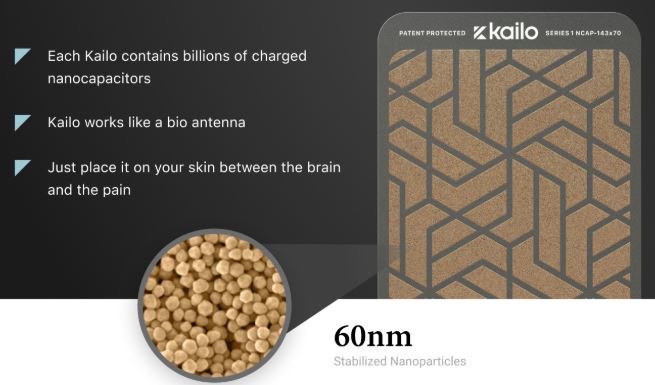 Looking at the physical construction of each patch, the Kailo really isn’t that complicated. The top level of Kailo is a carrier level, a non-conductive layer of materials that are made from a special synthetic polyester. This layer is supposed to work as a base for the Nano capacitor particles, while helping to protect them from water and friction. Basically, they’re the foundation on which the rest of the patch is built.

The second layer is made up from the nano-particles themselves. Among them you’ll find the Kailo contains billions of nanocapacitors, each measuring about 60nm in size. When you’re wearing Kailo, you may feel your Kailo begin to warm as your nervous system responds to it. It’s those nanocapacitors which are the particles which are tasked with interacting with the electrical system of the body. Billions of charged capacitors serve as a sort of antenna, working to assist the body in communicating the various signals which communicate pain.

Last but not least, the third layer is a substrate. It’s basically like the top layer, at least in terms of its outward functionality. Nanoparticles that are coated within the substrate keep all those charged particles held in place, while also maintaining a water-tight and dust-tight design. Which is how Kailo was made to be waterproof. 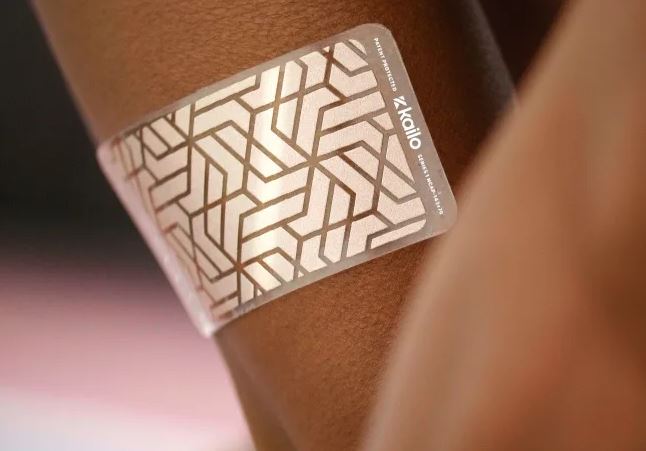 The resulting design is sealed against the ingress of dust, rain, and sweat. That allows you to wear Kailo inside of the pool, in the shower, or otherwise out in wet areas. You just want to keep it clear of cleaning chemicals, especially ones that aren’t supposed to be used with films and plastics. You can clean a Kailo patch using ordinary mild soaps and water, just avoid alcohol-based cleaners and you should be good.

In addition to the patch itself, every pack of Kailo includes a couple adhesives to help keep the Kailo stuck against your skin. Eventually, adhesives will lose its stickiness. When that happens, you just peel it away and then apply another one. Sooner or later, you’ll run out of the included adhesives. Kailo only includes three per patch, so it really won’t take that long to get through them. After that point, you’ll need to swap over to athletic tape or medical tape. Either will work fine for keeping Kailo in place.

Speaking of placement, Kailo can be used directly on the skin, or even over tight-fitting clothing. That gives you a lot more flexibility with respect to how you place it. Though direct contact over the affected area is usually the best way to go. 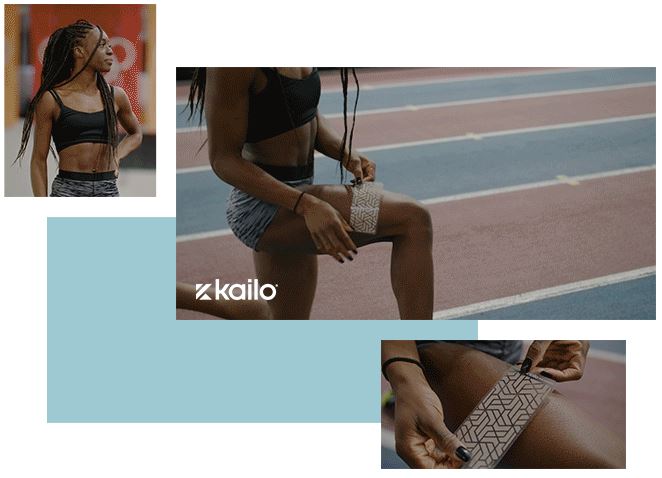 When you use a Band-Aid, you finish with that bandage within a day or two and then throw it away. How long can you keep using a Kailo Nanotech Patch? From the time of placement to the time of its removal, Kailo is supposed to continue to provide relief. At least, assuming it remains correctly positioned.

Though it does depend on the sort of pain you’re dealing with, there’s also supposed to be a lasting effect after Kailo has been removed. Those positive effects may potentially linger for days after being removed. Likewise, it’s common to experience continued relief for up to an hour after only wearing Kailo for a couple of minutes. But again this depends on the type of pain being experienced and the person using the Kailo. 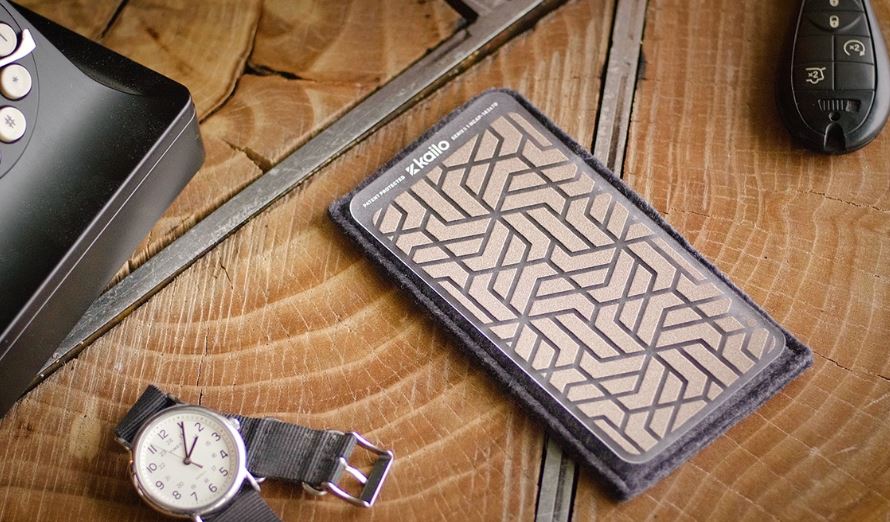 Kailo is supposed to be especially good for people who spend a lot of time sitting. That includes people who have office jobs that keep them immobile because staying immobile for long periods of time can be terribly unhealthy. It can be unhealthy for your bones, your muscles, your flexibility, and much more. It can even lead to clotting. 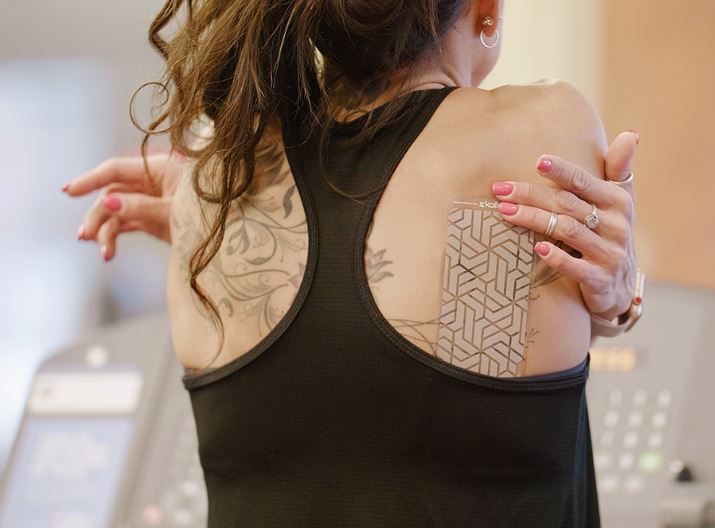 It should be almost obvious that Kailo has application for people who are recovering from a workout, but it’s also pretty good at helping people recover from injuries more generally. As long as you don’t start to think of Kailo as a panacea that can cure everything, and come at it with some realistic expectations focused on pain relief and aiding the natural healing process.

People who are dependent on pain medications, or otherwise struggling with chronic pain will probably be able to find some uses for Kailo. Though again, it does depend on the sort of pain that they are experiencing. Anecdotal evidence is the best that people have to rely on for this device, unfortunately. But some people have even had success treating migraines.

As with something like a Band-Aid, placement is critical to finding the most effective results from Kailo. Because once again, Kailo is supposed to work is by interacting with the nervous system pathways within the body’s electrical system. That means there can be trial and error when you’re trying to properly place the Kailo. But since it’s supposed to start working within a few seconds, it doesn’t take too long to find the right spot. 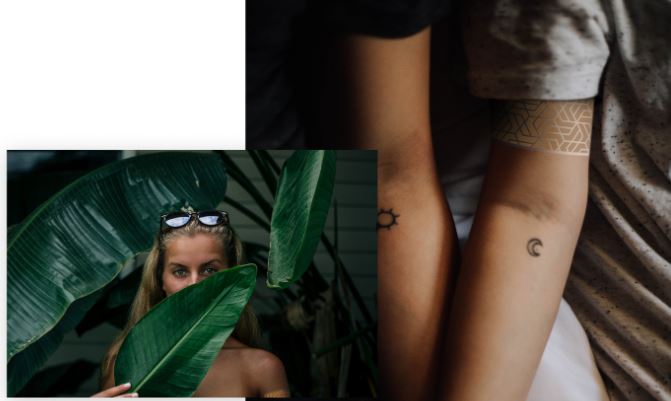 You just have to try moving the Kailo to various areas of the body until you feel a sense of relief, then tear away the adhesive back and apply that backing to the location. In order to help you along, a placement guide is included with the Kailo. But even without the placement guide, a little trial and error doesn’t take long.

Exactly, where can you use Kailo? It’s intended to be placed over the knees, elbows, neck, shoulder, head, lower or upper back, ankle, food, or hand and wrists. People have used Kailo for everything from headaches to menstrual cramps, so it’s worth giving it a shot for a lot of different things. It’s supposed to be able to provide relief for joints, muscles, and nerves.

Kailo uses ambient electricity of its natural environment, so i doesn’t require a battery, and it doesn’t have to be plugged in. And as you can probably imagine, Kailo patches are highly durable. When they’re treated with care, they should be able to last for years before eventually needing a replacement. That’s certainly more use-time than you get out of a couple of pills. 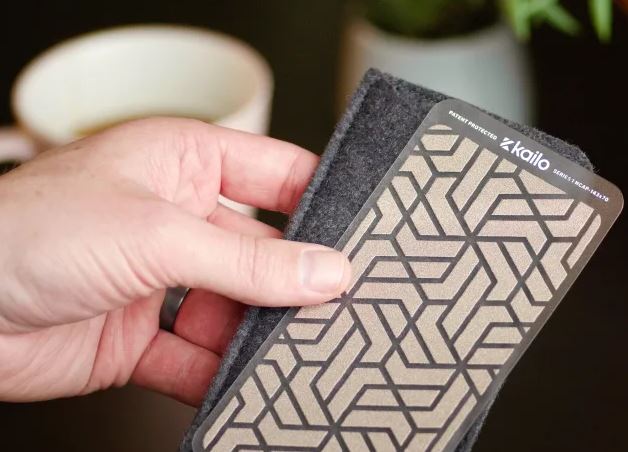 Kailo got its start through a highly successful Indiegogo campaign, so you’ll find there are a number of different varieties of kits. The standard version of Kailo includes a soft carry case, one reusable Kailo, and three removable adhesive strips.

There are also buddy packs, family packs, and group packs that contain two, five, or ten Kailos with a proportionally increased numbers of soft carrying cases and adhesives. In either case, Kailo includes a money back guarantee, so you can give them a shot. If you do try and take advantage of the guarantee, they’ll make you answer questions over the phone for a couple of minutes to ensure you used the Kailo properly.

Who Should Choose the Kailo Nanotech Patch?

Kailo might work for you, it might not. Kailo claims it has an 87% success rate, which provides pretty good incentive to give it a shot. Especially because it’s supposed to be backed by a money-back guarantee. So the only thing it costs for you to try is some time. Which makes it a reasonably good choice for people who are looking for an escape from pain that doesn’t require pills. 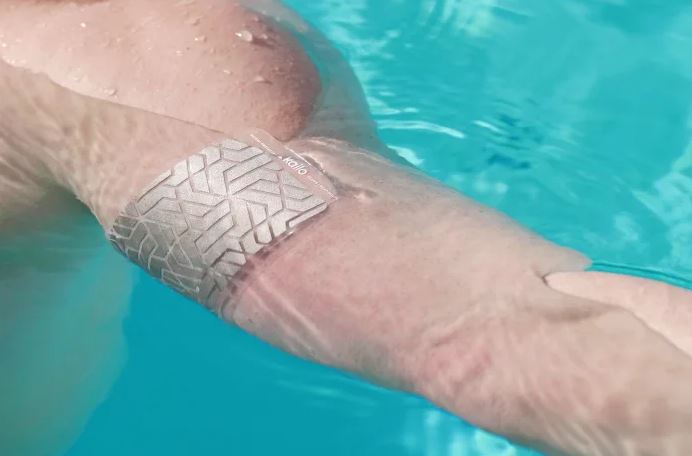 Of course, it’s important to be skeptical of any medical devices that haven’t been tested or reviewed by the FDA. In the absence of research published in a peer reviewed medical journal, what you’re relying on is a bunch of anecdotal accounts from individuals about how Kailo worked for them. People are notoriously bad at self-reporting this kind of data and the placebo effect is a real phenomenon.

With all that said, again, Kailo has that money back guarantee. So if you give it a shot and it does something for you, great. If it doesn’t, you’ll just have to sit through a phone conversation to return it. Maybe you shouldn’t buy the family pack until you’re sure this thing is going to work for you. But it just might be worth a try.