Familiarity matters. There are any number of reasons why you might want a wireless adapter for the Switch. It’s great to be able to re-use your old controllers. But selecting between different controllers isn’t merely a matter of preference.

As you learn to play with one type of controller, switching to a different controller is disorienting. It requires you to relearn mechanical movements you already know on another platform. And no matter how much you might love the Joy-Con remote, you won’t find many people who believe it’s the best controller for every type of game.

Many adapters aspire to very little. For instance, they might help your Nintendo Switch support one new type of controller. The 8BitDo Gbros Wireless Adapter can help you connect your Switch with virtually any controller that will plug into a Nintendo console. 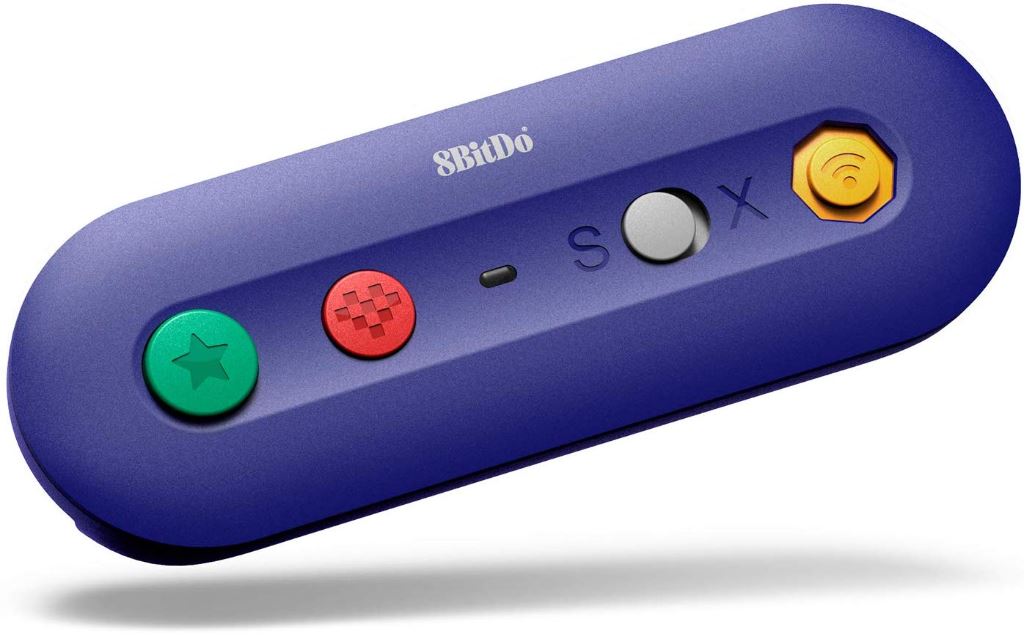 Perhaps most notably, that includes the ability to connect to a GameCube controller, one of the most popular and beloved Nintendo controllers. But again, this adapter’s capabilities can support nearly every Nintendo controller. It may even be adapted beyond the Switch.

To help connect older Nintendo controllers, the 8BitDo Gbros Adapter is taking advantage of the Nintendo Switch’s wireless connectivity. There are a number of pros and cons to going wireless. But for people who like to minimize how many cables are running across their home, wireless adapters are really the way to go.

The 8BitDo Gbros Wireless Adapter measures 4.1 x1.1 x 1.4-inches, and weighs under two ounces. Though it’s an adapter, it actually looks like a game controller itself. From a glance, you can tell the bright purple aesthetic was intended to match the Nintendo GameCube. The similarities are so striking, you have to wonder if 8BitDo managed to get legal approval from Nintendo, or if they’re merely skating a thin line with copyright law. 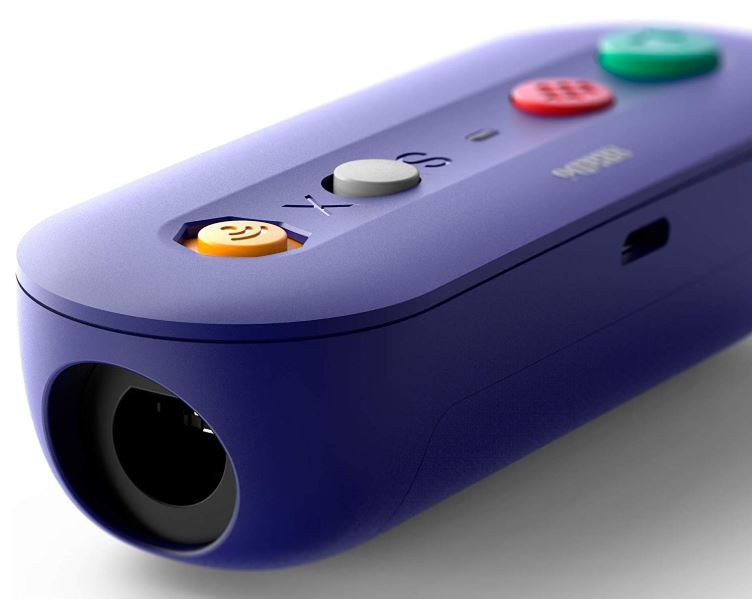 In any case, the adapter connects to your Switch like almost any type of controller. But it’s physically most similar to a Wii-mote. Once you’ve got your controller connected, it’s essentially no different from having it plugged into a console. The adapter doesn’t have any pretense of remaining stationary. It’s ready to be dragged across the floor along with your controller cables, or otherwise knocked around a little bit while you untangle wires.

The left side of the adapter has a connection port for your controller. Its size and placement is pretty hard to miss, though it does make the adapter look like it has a cigarette lighter charger on the end. The bottom side also hides away a micro-USB port. Upon seeing that, you may start to suspect it’s possible to charge the adapter. But battery issues are something we’ll have to cover in more detail later.

First, we need to take a closer look at the front face of the adapter. Along its face, you’ll notice a handful of colorful buttons and switches. There’s a green star, a red heart, a gray slider-switch, and a yellow button with a wireless icon. People who are familiar with Nintendo will recognize the home and screenshot buttons.

Even if you don’t plan on using the adapter on a PC, it’s important to keep an eye on this switch. If you accidentally move it to the wrong setting, you can create a frustratingly simple problem for yourself. Your Nintendo Switch will struggle to recognize the controller with the setting incorrectly configured. And if you never use the Windows switch, you’re not likely to think about it.

It’s not simply nostalgia that draws people to use their old GameCube controllers. The GameCube controller has notches on its joystick, which work to prevent your fingers from slipping during play. The button layout is preferable to Joy-Cons because analogue buttons are used in place of the joystick. And even relative to other popular game controllers, the left-right buttons are amazingly comfortable. 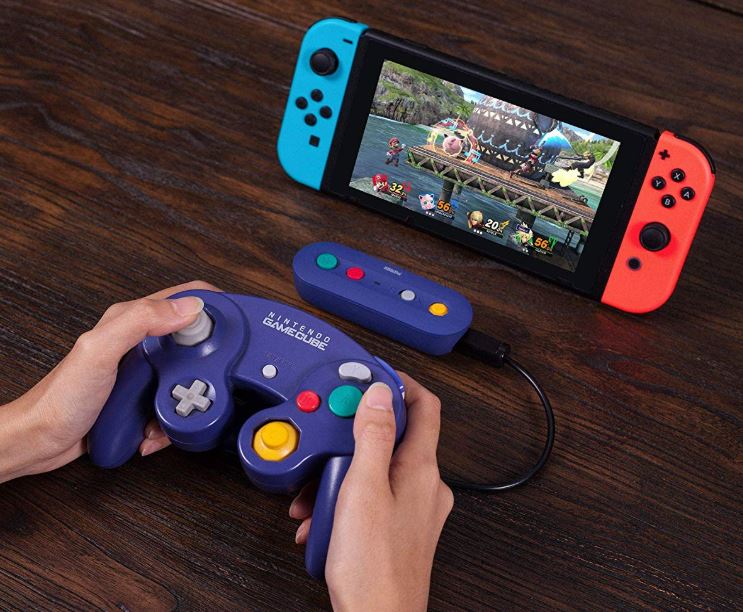 Apart from the glorious GameCube controller, the 8BitDo Gbros Wireless Adapter for Nintendo Switch can help you connect and adapt peripherals from the NES, SNES, Wii Classic, and SFC Classic. The complete list of every controller you can use is essentially an exhaustive collection of every Nintendo controller ever built, with very few exceptions.

And that pairs beautifully with the Nintendo Switch because of all the backwards support Nintendo is providing for its older games. People can play their old favorites using the controllers they used to play with, which is fun for nostalgia sake, but also has a more material purpose.

If you’re feeling adventurous, you can even break out your old Power Glove or Duck Hunt gun. If you start digging into those more obscure controllers, you’re certainly begging to encounter support issues. But such issues should be localized to individual games and not widespread, which still makes it worth trying-out even less common controllers. 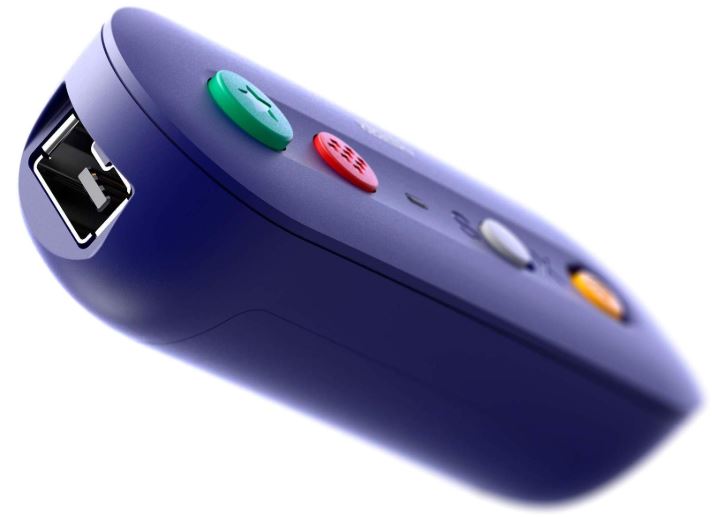 After you’ve got everything connected, the 8BitDo Gbros Wireless Adapter for Nintendo Switch wirelessly transmits data from your controller to your Switch. The wireless connection occurs over Bluetooth 4.0, which ensures you have connectivity that’s nearly as stable as a wired controller. And drastically more far-reaching than a wired controlled, allowing you to stand more than thirty feet away.

Bluetooth 4.0 helps ensure the connection between your controller and Switch is quite responsive, and perceptually indistinguishable from using a wired controller. This especially holds true if you’re gaming on televisions or projectors. You’d really need to be playing on a monitor before being wireless would begin to be a real concern. And even then, the difference is quite small.

Wireless connections may be transferred across thin-air, but they’re powered by something far more concrete. In this case, you’ll need to power the adapter with two AA batteries. After you’ve got a pair of charged batteries in the adapter, you can expect about 30 hours of playtime.

As always, battery performance depends on a variety of factors. But if you use reasonably good batteries, you can actually reach that 30-hour mark. And because this adapter is competently designed, you don’t need to remove your batteries between uses. But if you’re really looking to squeeze every minute of power from your batteries, popping them out between lengthy sessions is rarely a bad idea.

Counter-intuitively, it was a good idea to not use a built-in battery. Because it means this device has an essentially limitless lifespan. If they had instead used a built-in battery, you’d be forced to throw away the adapter after a few years. You’d also see a much higher sticker price. 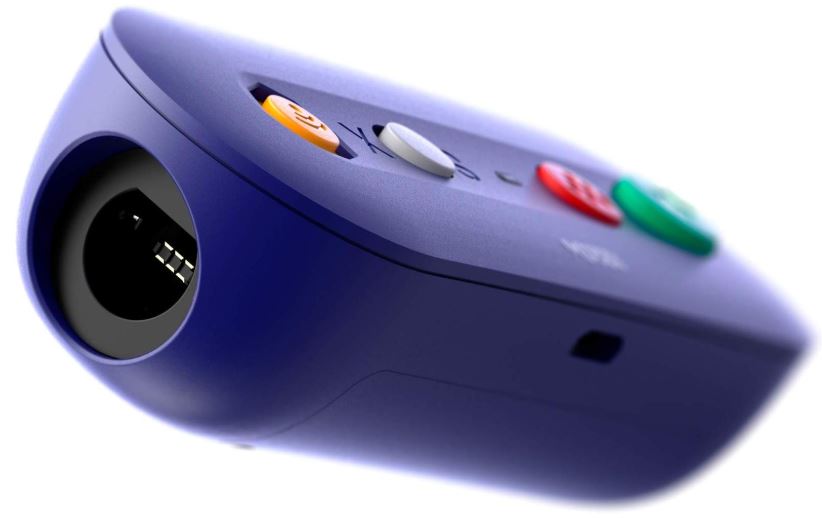 No batteries are included with the 8BitDo Gbros Wireless Adapter, so you’ll need to think about grabbing those separately. Typically, devices that include free batteries come with some pretty underwhelming samples, so their absence is probably for the best.

The 8BitDo Gbros Wireless Adapter is already quite value-driven, it doesn’t need to be showering you with extra batteries to make itself worthwhile. It’s always a little disappointing when those free batteries run out, anyway. Nobody wants to be providing maintenance to their new toys only a few days after using them.

Being powered by removable batteries, and offering a reasonably sturdy build, there’s really no reason to think this adapter won’t last virtually forever. The 8BitDo includes a cable band, USB cable, and a user manual. The manual is mostly useless, unless you have no idea what each button does.

One more thing to keep in mind. If you’re going to connect to a Windows PC, the adapter requires you use Windows 7 or later. Though the drivers involved could likely be convinced to operate on older versions of Windows, leaving the comfortable terrain of native support is always a perilous journey to undertake.

If you’re not planning on taking your adapter to the Windows platform, it might be worth putting a small piece of tape over the grey-slider button. If you happen to switch the adapter to the wrong setting by accident, it really can take quite some time for you to realize what’s happened. And that kind of frustration is really easy to avoid with a little tape. 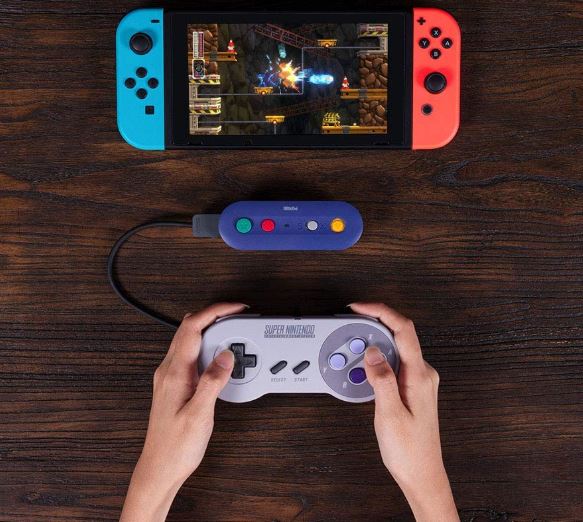 Who Should Choose 8BitDo Gbros Wireless Adapter for Nintendo Switch?

There’s really only one thing to dislike about the 8BitDo wireless adapter, and that’s the fact it requires batteries. For an economical and effective wireless adapter, that’s a necessary evil. If this adapter could be powered by both wireless and wired connections, it would be flawless.

But replacing the batteries isn’t that much of a burden. The device is only powering a wireless signal, which isn’t battery intensive. That’s why you can squeeze so many hours of use out of this adapter. It also helps they resisted the urge to cover their adapter in LEDs.

The purple GameCube-type aesthetic is a really cool way to make this adapter feel gaming themed. If you have a Nintendo Switch, and a few old Nintendo controllers laying around your house, then this adapter can help make your old controllers relevant and useful. It does so with style, and without attracting an enormous price tag in the process.

If you prefer playing with one of the older Nintendo controllers, the 8BitDo Wireless Adapter for Nintendo Switch is definitely worth picking up.