Since the iPod was released, we’ve seen plenty of docking alarm clocks. 15 years ago, waking up to your own music was a pretty novel idea. Today, unfortunately, the novelty has worn off a little bit. There hasn’t been very much development going on in the alarm clock industry. It seems like many companies are just rehashing the same old tired designs over and over again.

Smartphones, on the other hand, have been upgraded quite a bit. We’ve seen alarm clocks that are updated to work with the latest connectors and increasingly larger form factor, but we haven’t seen a lot of features that work with the improved functionality of our phones.

For example, why are so many alarm clocks not designed to work with Spotify, Google Play or other music streaming services that have become so popular? Why aren’t these alarm clocks syncing to our phones and using our existing alarm settings? Witti seems to have been asking the same questions when they designed their latest BEDDI Intelligent Alarm Clock. 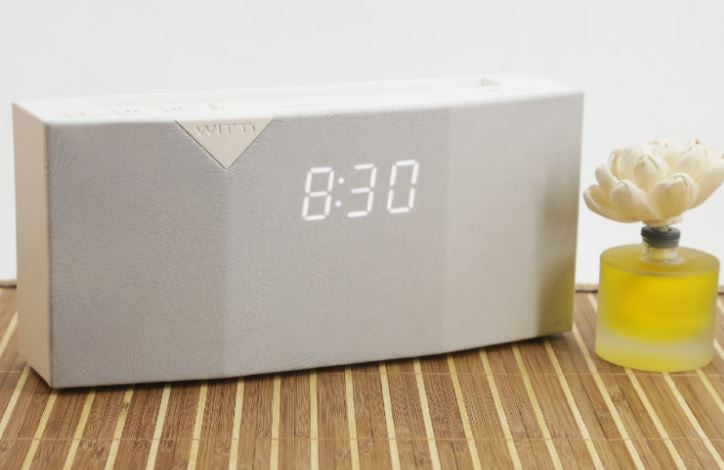 The Witti Beddi is one slick looking clock. They went for a very minimalist design. Virtually the entire front is covered with the acoustic fabric you’ve come to expect from a speaker. The actual clock portion, however, is made from an LED illuminated display that shines through the fabric. It’s a pretty impressive looking effect. Another great design element is the LED strip on the bottom. Similar to the ground effects seen on some vehicles, the lighting really does look slick without being too gaudy or over the top. 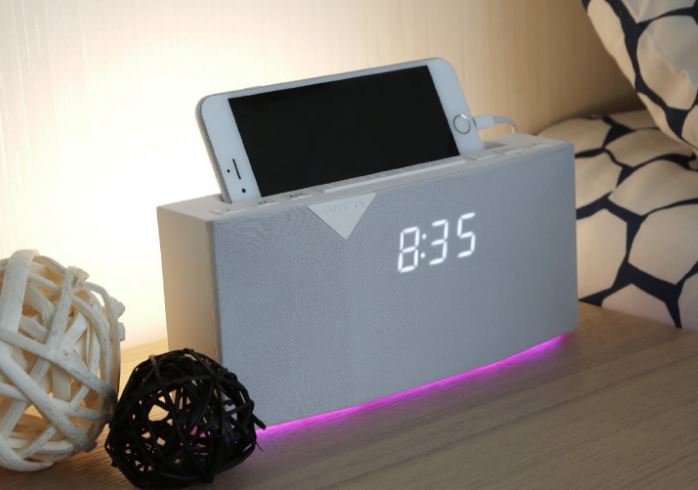 The Witti Beddi alarm clock connects to your phone over Bluetooth, with more of the functionality coming through the free companion app. The app works on either Android or iOS, making it compatible with pretty much any modern smartphone.

Obviously, all that Bluetooth can do a number on your phone. That’s why the Beddi has a built in USB charger on the back. If you have a modern “phablet” style smartphone such as the iPhone 6S+ or Samsung Galaxy Note, you’re probably used to avoiding 3rd party chargers as they tend to work very slowly with your phone. Fortunately, the Beddi has both a 1 amp and a 2.1 amp charging port. This means that it supports fast charging on high capacity batteries, allowing you to juice up your devices in as little as an hour. 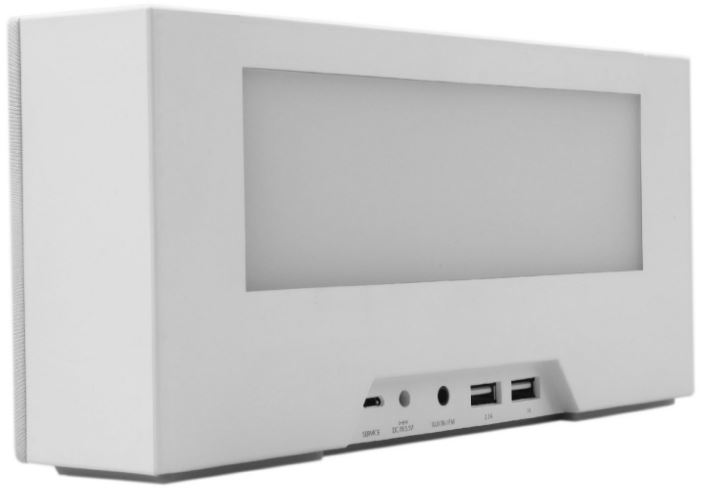 While not the flashiest looking alarm clock on the market, the Beddi is something that will look great in any room. The design is very modern looking, with a reasonably straight face accented by the small triangular logo in the top right. 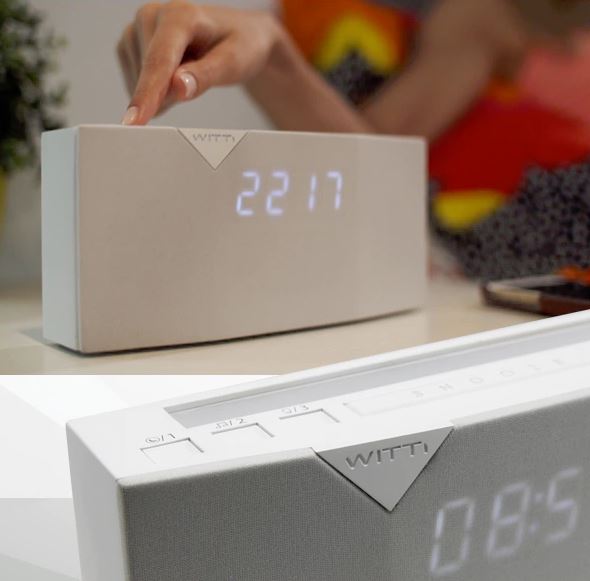 The “wow” factor comes from the LED strip on the bottom. These multi-color LEDs are capable of producing up to 32 million different colors, which you can choose from your smartphone. Aside from this, the design definitely looks understated when you consider all of the different things this clock can do. If you look at some of the iPod docks from the mid-2000s, you’ll probably be glad it’s designed this way. The Beddi employs an aesthetic that doesn’t really go out of style. Given that you are not likely to replace your alarm clock every year, picking one that’s going to look good for many years to come is important. 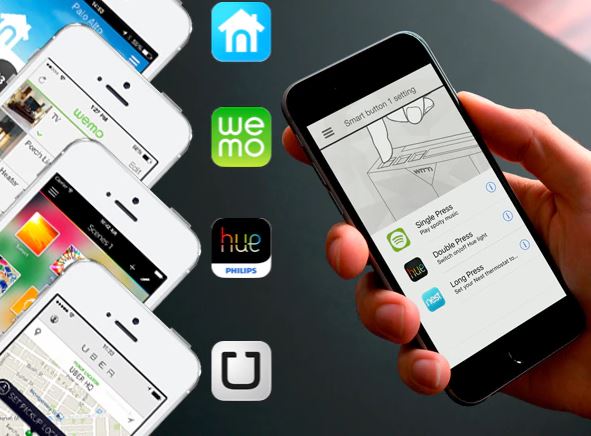 Where features are concerned, it’s the companion app that really makes this alarm clock powerful. There are three physical buttons on the Beddi. Through the included app, you can configure these buttons to do whatever you want. And when we say whatever you want, we mean it. You get the standard phone-based features such as launching a Spotify playlist or calling an UBER. But you can also sync the clock up with any of your home automation equipment. This allows you to turn off the heater, dim the lights, or even lock the doors at the touch of a button.

There are a lot of devices calling themselves “smart” these days. But the Beddi is one of the few that actually earns the title. With the included app, you can sync this clock to virtually any other connected appliance in your house.

The app itself is very easy and comfortable to use. It’s got a nice looking interface, (looking especially snazzy on a white-faced iPhone) and is very easy to use. 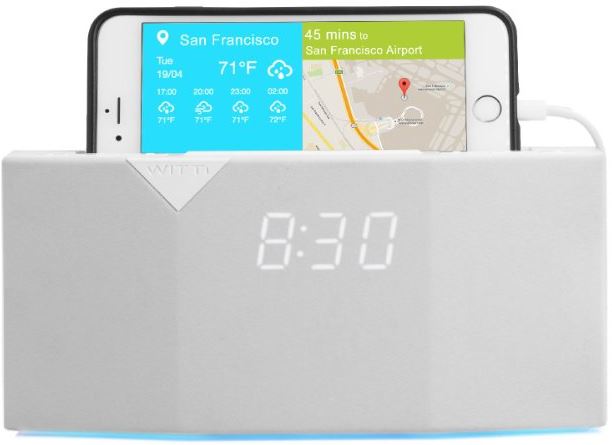 The Beddi works just as you’d expect an alarm clock to work. You set what time you want to wake up on your phone, and the clock wakes starts your favorite playlist at that time. But it does have a few extra features that can make your mornings a little better than usual.

If you like, you can wake up to something other than music. By connecting to the GPS in your phone, it can determine your location and play the relevant weather forecast or even local news. Alternately, perhaps you’re the type of person who like to get up a little more gradually. There’s a bright LED light on the back. As you approach your wake-up time, the light will slowly begin to illuminate. 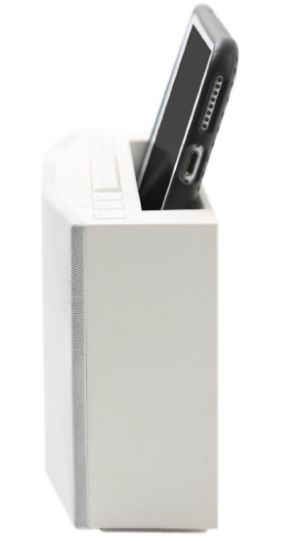 Many consumers swear by this “wake up light” feature. In a way, it makes sense. Humans have evolved over thousands of years to wake up when the sun comes up. Instead of being jarred out of a pleasant dream, the clock gently lifts you into the waking world with its softly diffused glow.

What about sleeping? If you live in an urban environment, getting to sleep can be a challenge. Cars honking outside, the neighbors stomping around upstairs, all of these noises are a frustrating distraction and make it difficult to drift off at the end of a long day. The Beddi alarm clock has a built in “white noise” generator. These are sounds that are very easy for your brain to cancel out.

The effects are simple. The white noise drowns out the sound pollution in your environment, and your brain tunes out the white noise. There are a few built in sound effects like “humming fan”. In our tests, they actually worked pretty well! I suppose this shouldn’t come as a surprise, as white noise generators have been on the market for quite some time. But it’s certainly nice to see a proper integration of this technology.

The Beddi has dual three watt integrated speakers. These are the same titanium dome style speakers that are used in popular speaker docks from companies like Sony and Bose. The end result is a sound that, despite coming from such a compact source, is very full bodied and clear. It’s absolutely not harsh at all, and certainly enjoyable. 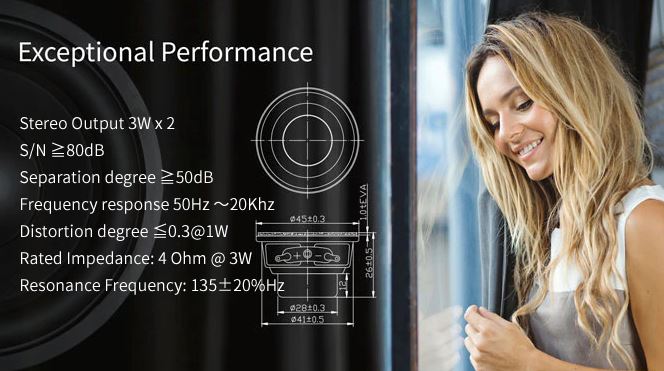 You’re not going to get the incredible clarity and positioning available from full size home speakers, but the sound quality is good enough to use the Beddi as a standard speaker dock. We tried using it over Bluetooth in a couple different applications. Whether we were enjoying a podcast, calming down with some slow jams, or even enjoying a movie from our tablet, we found no circumstances where the sound quality was anywhere close to disappointing. Even though this clock was never designed to be a portable speaker, this is just another one of the many features that this clock does well.

Considering the incredible array of features available, it’s pretty safe to say that the Beddi Smart Alarm Clock is a good buy. Really, the only thing it isn’t capable of doing is cooking your breakfast! Although, it can do the next best thing. Syncing it was a smart outlet allows it to get your coffee brewing ten minutes before your alarm goes off.

The consumers who are going to be able to make the most out of those clock are those who have already invested in some popular smart home features. For many people, your alarm clock is the first device you make contact with in the morning and the last device you touch before you go to bed. For this reason, it makes sense that your alarm clock will be the device responsible for all of those end of day tasks like turning off the lights or turning down the heat.

Normally, this is the part where we’d tell consumers that if they don’t need all of these advanced features, there is no reason to spend the extra money on such an advanced product. But if you compare the Beddi to many other docking clocks, it really isn’t that much more expensive. If all you need is a clock that plays your music when you wake up, the Beddi is a darn good one.

Obviously, a lot of us don’t have these advanced smart homes yet. However, this technology is only going to become more and more apparent. Since your alarm clock is something you expect to last a long time, why not grab one now and have something you can grow into?