When you’re installing a new SSD or HDD drive, there are two primary types of connection: molex and SATA. Molex connections have four large pins, which are shaped similar to the ground prong on an AC cord. SATA connections, on the other hand, have a flat, 15-pin design that looks much more advanced. Typically, molex connections are found on older drives, or on larger 3.5 or 5.5-inch drives. However, molex connectors are too big to fit on a 2.5-inch drive. And as smaller drives have become the norm, SATA has gradually been replacing molex as the format of choice.

Because of these twin standards, even newer PC power supplies often feature a molex connector or two. And if you’re re-purposing an older power supply for your new build, you’ll almost certainly be dealing with molex. So, what are your options?

One option is to simply purchase a newer PSU. This way, you can get the SATA connections you need. But upgrading your PSU isn’t always a convenient option. This is especially true if you’re adding a drive to an existing build. Adding a hard drive is a relatively painless, plug-and-play operation. Replacing a power supply is equivalent to major surgery.

Another option is to use a molex to SATA adapter cable. By going this route, you won’t need to worry about swapping out your power supply. Instead, all you need to do is plug the adapter into your PSU. Then plug your hard drive into the other end, and you’re good to go.

As SSD drives have gotten smaller and smaller, you actually have a third option. Some newer SSDs plug directly into your PCI Express slot, eliminating the need for a SATA cable altogether. This makes them very easy to use. On the other hand, it also ties up one of your PCI Express slot, limiting your options for future upgrades. If you’re interested in going this route, check out our review of the Kingston KC2000. It’s a 1TB drive that installs quickly and painlessly.

Today, we’ll be looking at the best molex to SATA adapters that money can buy. We’ve picked three of the industry’s leaders, and taken an in-depth look to see how they perform. But first, let’s talk about safety.

There’s a saying in the IT world: “Molex to SATA, lose all your data.” Now, this is a bit of an exaggeration, but there’s some truth to it. An improperly-manufactured molex to SATA adapter can pose a serious safety risk. And we don’t just mean that you can lose your hard drive. Under the “right” circumstances, your computer can catch fire. That’s downright terrifying! So how do you avoid it? 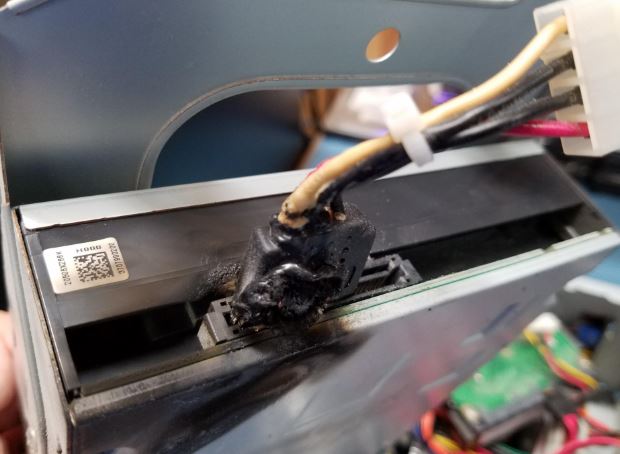 The first thing to do is to choose an adapter that’s properly manufactured. Look for good shielding, and a tip that’s crimped, not molding. This is essential, because poor shielding and tips are the cause of our safety concerns. In a poorly-manufactured adapter, power can arc from the 5.5-volt or 12-volt wire to the ground wire. Normally, a short of this nature would cause your PSU’s safety features to trigger and shut off the current. However, because the current is initially diverted to the ground cable, safety shutoffs will not trigger. Instead, the arc will melt through the plastic insulation until it shorts out to another voltage line. At the very least, this will destroy your adapter. More likely, it will damage your hard drive, and can even cause a fire. We’ve chosen well-designed molex to SATA adapters, so this shouldn’t be a problem. 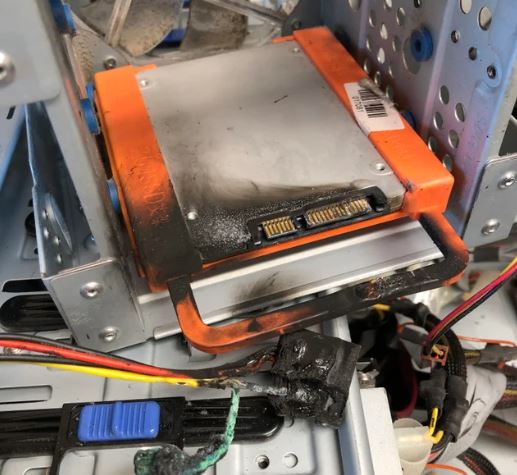 However, there’s another way to damage your PC with a molex to SATA adapter. If you’re not paying attention to your drive’s power requirements, you can easily cause damage. Typically, most SSDs use 5.5-volt power, and most HDDs run on a 12-volt current. Most adapters support both of these options. That said, there are some quirky adapters and quirky drives on the market. Make sure you’re using the right voltage cable for your drive, and all should be well. In our reviews, we’ve tried to explain what voltages and drives are best-suited for each-other. But do your own research. Using the wrong adapter will void your hard drive’s warranty, turning even a brand-new drive into a brick. 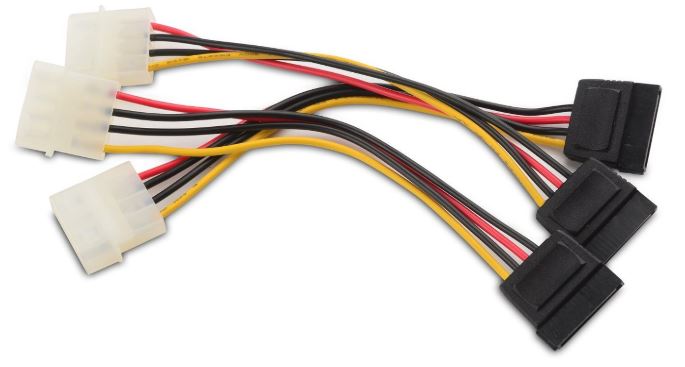 The Cable Matters 4 Pin Molex to SATA Power Cable converts a female molex plug to a female SATA plug. It’s 6 inches long, with 4-pin male molex plug on one end and a 15-pin SATA plug on the other. The SATA connections are crimped, not molded, as you can clearly see in the photograph. This ensures that operation is safe, and there won’t be any unexpected arcing. These connectors also come in a three-pack. This is probably overkill if you’re installing a single hard drive. But if you’re using an older power supply to build a new PC from scratch, you’ll have plenty of options. 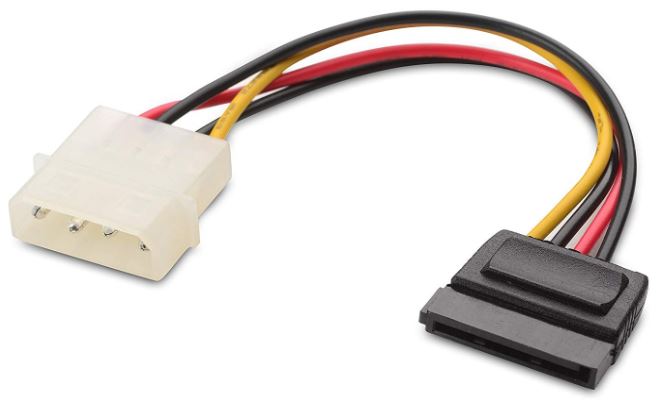 One thing you’ll appreciate about the Cable Matters adapters is how easy they make cable management. At 6 inches in length, they’re ideal for reaching across most PC cases without extra bulk. You won’t need to worry about finding somewhere to tie up the excess cable. That said, if you’ve got a very large PC case, some distances might be too far to bridge. In that case, a SATA extension cable can help you stretch things further. But we wouldn’t recommend this route if you can avoid it. The more cables and connections you add, the more chance that something ends up going wrong. If at all possible, the KISS (Keep It Simple, Stupid) rule applies.

So, what might you do with the Cable Matters adapter? Well, it delivers standard 5.5-volt and 12-volt power, provided it’s connected to a standard 12-volt power supply. This makes it compatible with the vast majority of PSUs and drives. Not only can you use it for installing a new SSD, but you can connect an HDD, or even an optical drive. That’s one nice thing about standard equipment. It’s almost universal. That said, you won’t be able to use the Cable Matters adapter for powering a 3-volt device. The current will be too powerful, and will end up causing damage. 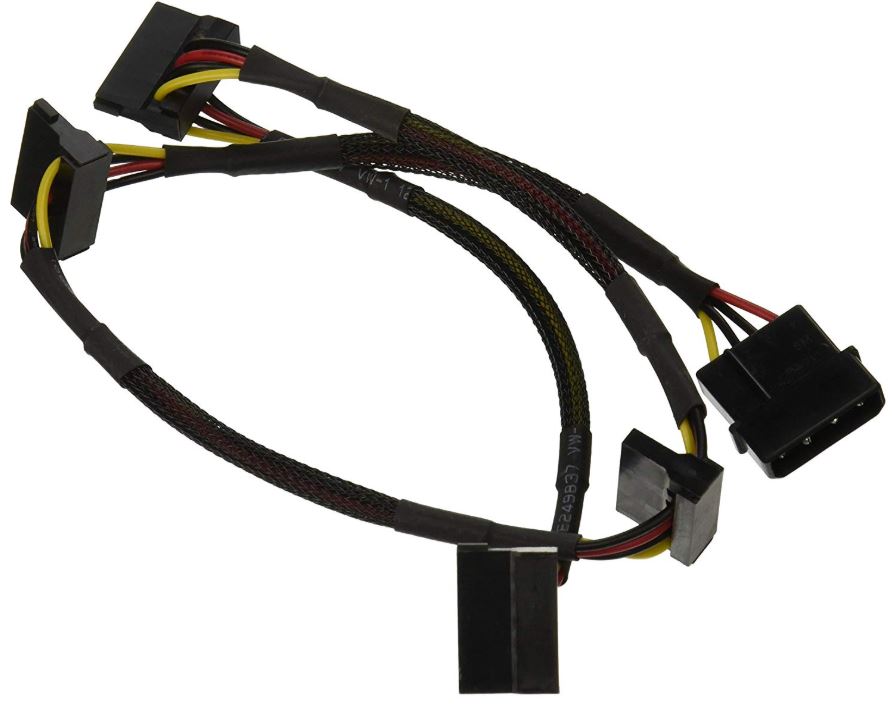 Where the Cable Matters cables are designed to connect a single device, the Monoprice adapter is a complete wiring harness. Instead of a single SATA plug, it features four 15-pin SATA power connectors. These connectors are spaced out every 6 inches across a set of 24-inch cables, making it easy to connect multiple drives. At one end, you’ll find a standard 4-pin molex connector. As with the Cable Matters, all the connections are once again crimped, not molded. This is an essential safety feature, and we’ve beaten it to death by now. Whatever you do, don’t buy an adapter with molded connections, or you’re going to have a bad time. 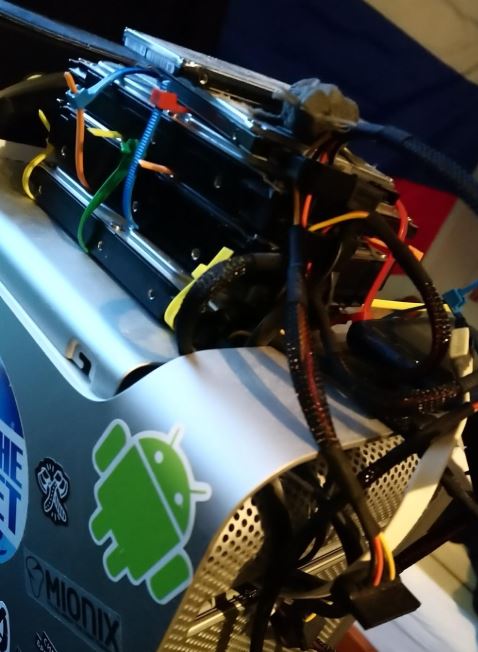 The main reason to use the Monoprice adapter is if you’re building an entire PC around an old power supply. With a simple molex connection, you can attach up to 4 SATA devices. That’s enough for an SSD, an HDD, and a Blu-Ray drive, with an extra plug left over for later expansion. Cable management is very easy. The harness is held together by tubes of webbing, which span the distance from plug to plug. Not only does the webbing make the cables easy to route, it also protects them from damage. This is a significant benefit, since you won’t need to worry about damaging the insulation during installation.

Like the Cable Matters adapter, the Monoprice adapter is designed to deliver 5-volt and 12-volt power. This is sufficient for the vast majority of hard drives, and it’s also good for most optical drives. However, keep in mind that some SATA devices require an additional 3-volt power supply. The Monoprice adapter does not deliver this extra power. It’s not going to damage anything. Your 3-volt-dependent drive simply won’t work. Look at your drive’s power supply requirements before you buy. Otherwise, you might be disappointed in your results. 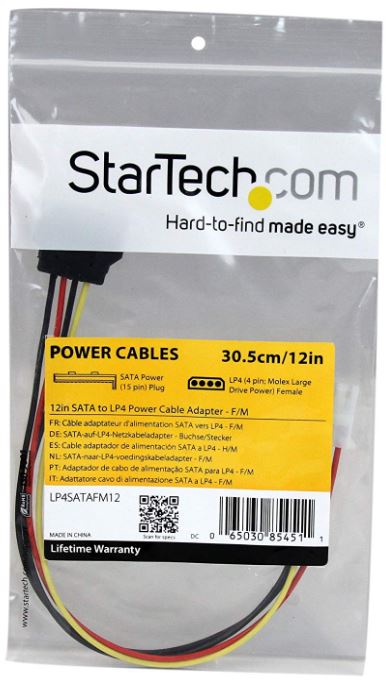 The StarTech adapter is a little different than the last two options we looked at. Instead of converting a female molex plug to a female SATA plug, it does the opposite. It converts a female SATA plug to a female molex plug. The cables are 12 inches in length, so you’ll have plenty of options for cable management. Like the Cable Matters and Monoprice adapters, the connections are all crimped. However, that’s less important on a SATA to molex adapter than it is on a molex to SATA adapter.

The StarTech power adapter is very well-designed. Not only are the connections crimped, but the 12-inch length accommodates almost any computer case. The overall quality is also excellent, including wide flanges on the ends that provide an easy grip. 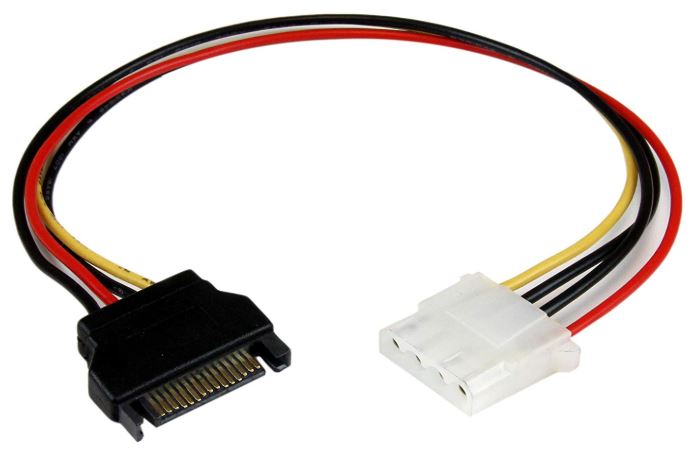 So, why in the world would you want a SATA to molex adapter? It sounds like going backwards, and in a sense it is. But going backwards isn’t always a bad thing. Suppose, for example, that you’ve got some classic video games on floppy discs. If you’re trying to connect an older 3.5-inch floppy drive to a modern power supply, you’re liable to need one of these adapters.

The same is true for a wide variety of older drives. You see, older drives use something called Integrated Drive Electronics (IDE). They handle power a little differently than newer SATA drives, and they require a molex power input. Meanwhile, many newer power supply units don’t even have a molex output. Why would they? Newer drives use SATA, after all. But this can leave you in a bind if you’re trying to bring life to older equipment. If you’re a fan of classic games, or if you’re trying to recover very old data, the StarTech is a solid choice. Besides which, having a floppy disc drive is just plain cool.

So, which one of these power adapters is the best? It all depends on your hardware and your build. For connecting a single hard drive to an older power supply, the Cable Matters adapter is our top choice. It’s 6 inches long, and it adapts your female molex port to a female SATA port. It also comes in a 3-pack. While there are better options for connecting multiple devices, it’s good to have options.

Alternatively, the Monoprice adapter is a much better choice if you’re building a PC from scratch. The four integrated SATA plugs are attached to a single cable, which makes cable management a snap. It also gives you the ability to connect multiple drives into a single plug. This is useful if you’re using an old PSU that doesn’t have a lot of plugs.

Finally, the StarTech adapter is the oddball on our list. Instead of connecting newer drives to an older PSU, it’s ideal for connecting an older drive to a newer PSU. Considering the fact that technology is constantly advancing, it’s good to have a way to re-use your older drives. It’s safe to say that, no matter what you need, at least one of these adapters will be right up your alley.