When it comes to emulating old games and consoles, you can divide people into two groups. First are the purists who believe their emulation should be a faithful recreation of the original. Purists are willing to take the bad with the good, often seeking to recreate every detail of an original experience.

The second group could be called modernists. These are people who feel there’s nothing wrong with making everything run a little smoother, even if the experience isn’t identical to playing with a classic NES or SNES. Depending on which group you belong with, you’ll end up wanting a very different cloned console.

How hard is it to emulate older games? It’s actually far more challenging than you might think. Game software is like an incredibly complicated house of cards. Cloned consoles don’t use identical hardware to the original design, and that’s especially true when you’re talking about cloning an older system like the NES or SNES.

Those systems were made from old parts that just don’t exist anymore, and wouldn’t be cost effective to use even if they could be manufactured again. Consequently, you’ll find that even for the best clone consoles in the world, like these Sega Genesis Clones, there are still going to be a couple of compatibility issues. Some quirks are actually because classic consoles were made with design flaws, but fixing those flaw can create unintended consequences.

Because even though the clone can be built with almost flawless software design, the underlying hardware will always be different, and that is always going to run you into little issues. You might find one of your games simply does not work, or the controller isn’t recognized, or one of the levels causes the game to crash. You might even end up with a console that isn’t capable of saving your games. Fortunately, you can minimize your risk of encountering those issues by following a couple simple guidelines. 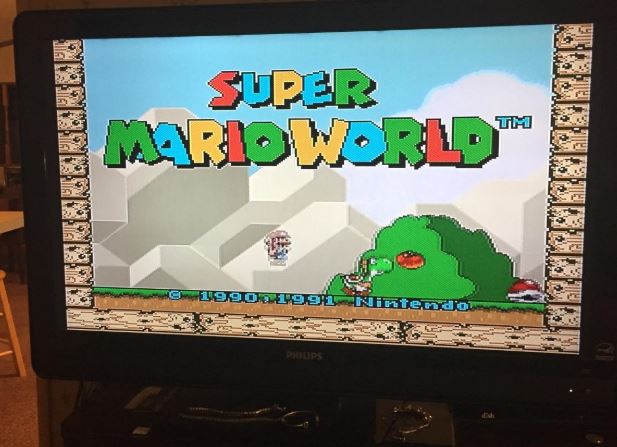 Frankly, many console clones are nothing more than Chinese console knock-offs which have been rebranded. If you’re looking for an authentic emulation experience because you’re more of a purist when it comes to emulation, then you’ll have to sift through many consoles to find one built specifically to offer an authentic emulation. If you’re not a purist, then you’re actually much safer from junk clones.

Apart from its build quality, you might be interested in whether the cloned console manages to recapture the original console’s aesthetic. That can be tricky to do for reasons related to copyright and trademark infringement, but you can get terribly close to the original in many cases. 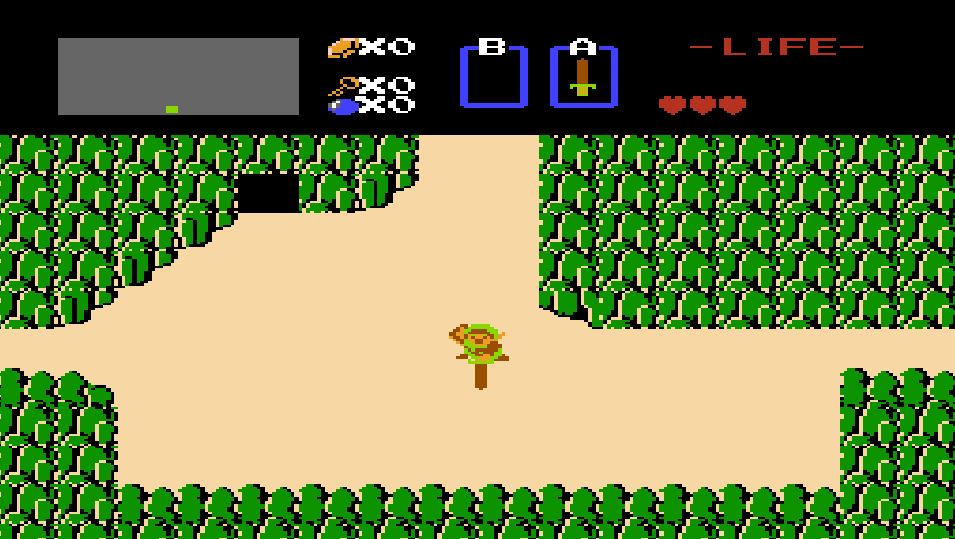 There’s far more interest in emulating the SNES than the NES. But if you want both, then you’ll need to ensure the console you select can play both. That will mean extra controller ports, extra game ports, and a higher price tag. It will probably also mean extra controllers.

Of course, it’s not all gloomy news. Being redesigned allows clones to do things which the original consoles were unable to do. For instance, clones have the ability to support both Japanese and North American because they’re not region-locked hardware. That’s an extra which even emulation purists should easily be able to appreciate.

For every moment you spend considering the console, you’ll want to spend just as much time looking at the controllers. Controllers may attempt to closely emulate the original layout and feel of the NES or SNES, or they might make compromises that would be more suitable to modernists than purists.

Whether or not you’re looking for authenticity, you’ll find choosing your controllers is extremely important. Because if you’re not looking for an authentic controller design, then you’ll want a modern redesign with more responsive buttons. In either case, most of the better console clones on the market will include two controllers, just like their original release. 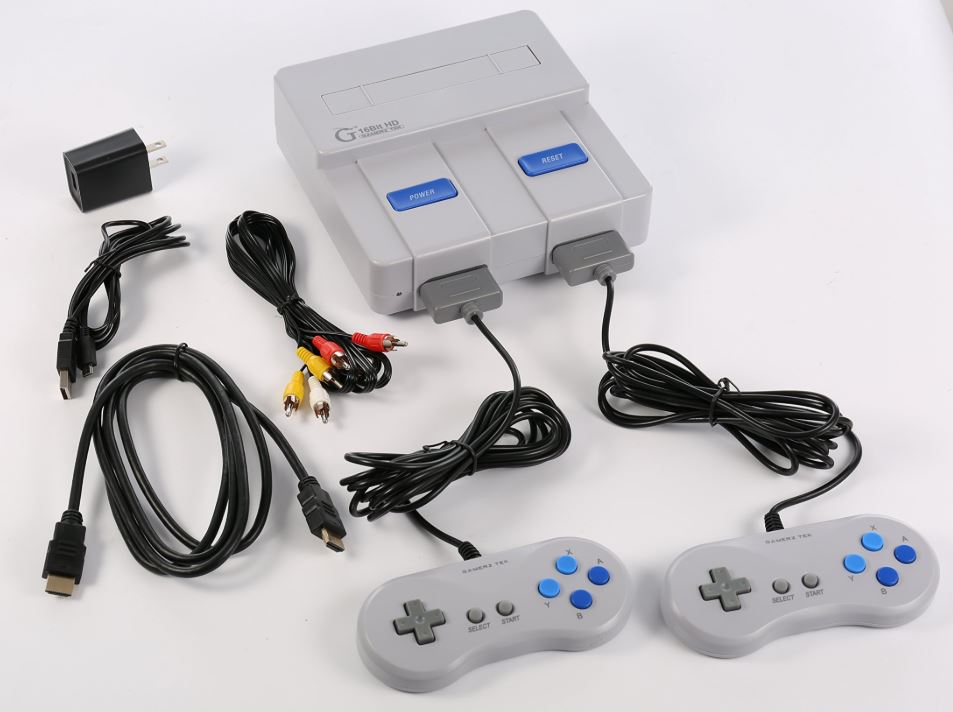 The Gamerz Tek 16-BIT HD Entertainment System is a simple, yet highly competent clone of the SNES. It includes a pair of controllers, all the accessories you need to get started, and it allows you to play both Japanese and North American releases.

Gamerz Tek understands their audience pretty well, so they’ve included options which are appealing to both purists and modernists. Whether you’re trying to recreate classic experiences, or you’re simply trying to play your old games, you’ve got options. 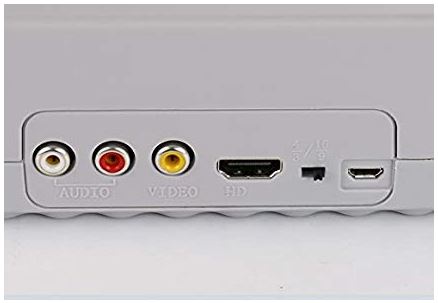 The Tek 16-Bit SNES measures roughly 5.5 x 5.5 x 2-inches, making it quite similar in proportion to the classic NES. The gray chassis, power/reset buttons, and controller ports are more reminiscent of the Super Nintendo, however. It’s almost like a crossbreed.

Along the backside of the console, you’ll find classic white/red/yellow audio-video inputs. If you’re not looking for a faithful recreation, you can use the included HDMI port instead. The audio and video output is 720p HD, and can be switched between 16:9 and 4:3 aspect ratio.

If you’re looking for beauty above all else, then you’ll probably end up playing 16:9. But if you’re trying to emulate the classic SNES experience as closely as possible, then you’re better off sticking with 4:3. In either case, being able to swap between them ensures everybody is happy.

Aesthetically speaking, this console is actually available in two color schemes. The first is light gray with purple highlights, and the second is light gray with blue highlights. On occasion, there are significant price differences between color options like this because sometimes one color is far less popular than another. But if you’re not trying to save a couple bucks, you’ll notice the purple version of this console clearly looks more like the SNES than the blue version. 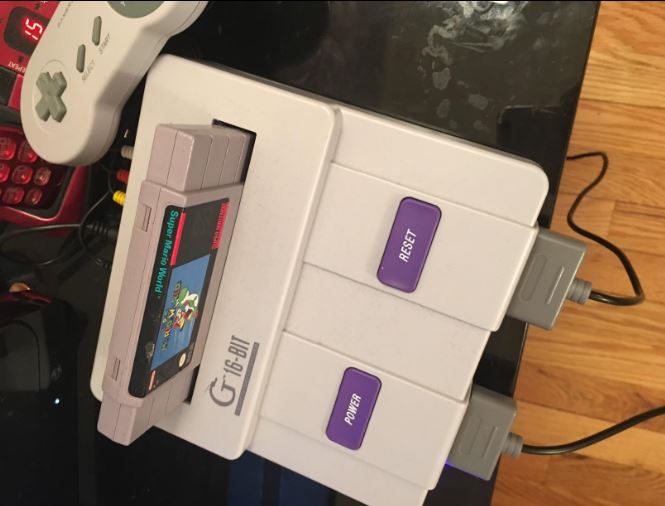 The start and select buttons are distinctly different. Each of the buttons on the keypad are slightly smaller and a bit more modern looking than the original design. The buttons themselves are also somewhat less mushy feeling than classic NES/SNES buttons.

The cord for each controller runs about ten feet. Again, we’re not exactly seeing attention to detail when it comes to emulating the classic SNES experience. The classic controllers for these consoles had controllers which ran about five-feet from the console, not ten.

But that’s one of those things where even people who are looking for a faithful recreation of the SNES are willing to turn a blind eye. And if you can’t bring yourself to do that, you can always force yourself to sit closer to the TV, instead. 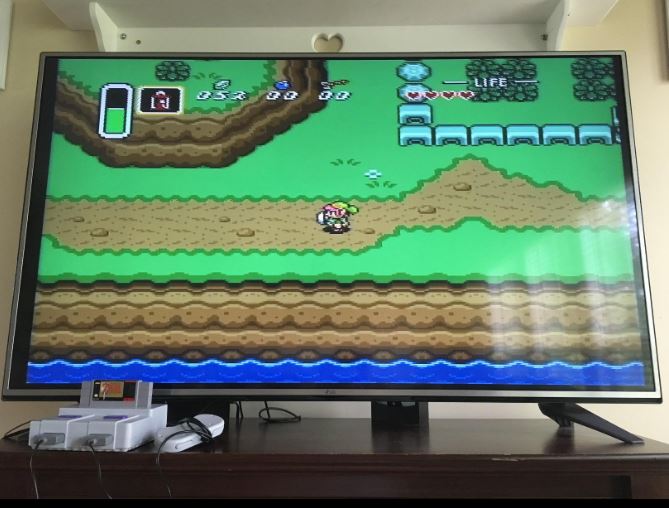 This console includes an HDMI cable, and a pair of classic red/yellow/white analogue AV cables. It also includes a simple wall outlet for the power cord. Basically, everything you need to get started, except for a couple of games. Because unlike some modern rereleases of game consoles, this clone does not include any onboard storage or extra digital features. 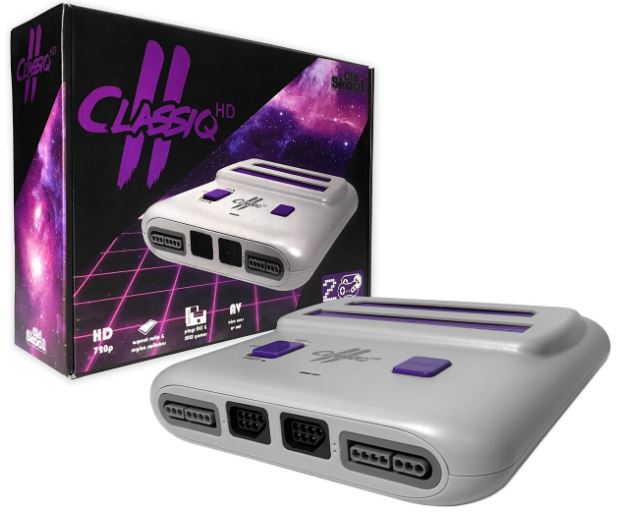 For all its strengths, the Gamerz Tek SNES clone won’t let you play NES games. Doing so requires a lot of extra hardware. It means the console needs a separate port for NES games and SNES games. It means additional SNES and NES controller ports. It means both NES and SNES hardware, which creeps up the price.

But if you’re looking for both, you’ll have a tough time finding a better combo than the Old Skool Classic 2 HD. Like the Gamerz Tek clone, this model provides options which will appeal to both people who see themselves as game emulation purists, and to more casual players.

Similar to the Gamerz Tek 16-Bit Entertainment System, this console is capable of switching between forced 16:9 and 4:3 aspect ratio. So it doesn’t matter if you’re trying to experience a faithful recreation of a classic console, or you’re just trying to make stuff look pretty. The options are there.

And similar to the Gamerz Tek clone, the USB-based adapter makes it pretty simple to run power to the Classiq 2 HD on a modern TV. On the backside of the console, you’ll find the aspect ratio switch, DC power in, white/red/yellow AV cable ports, and an HDMI port for HD connections.

But that doesn’t mean you’ll necessarily get to use your SNES controller on your NES games. In fact, you still need to treat these as two separate consoles, even though they’re sharing the same body. SNES and NES hardware and software doesn’t get along, and nothing about the Old Skool Classiq 2 will help you overcome that limitation.

For people who are interested in two player games, you’ll have to pick-up an additional controller. You might even need two controllers, if you wanted to access multiplayer on both the NES and SNES equipment. Though many people have these old controllers laying around already, so if you happen to have a couple, you can forget this problem entirely. 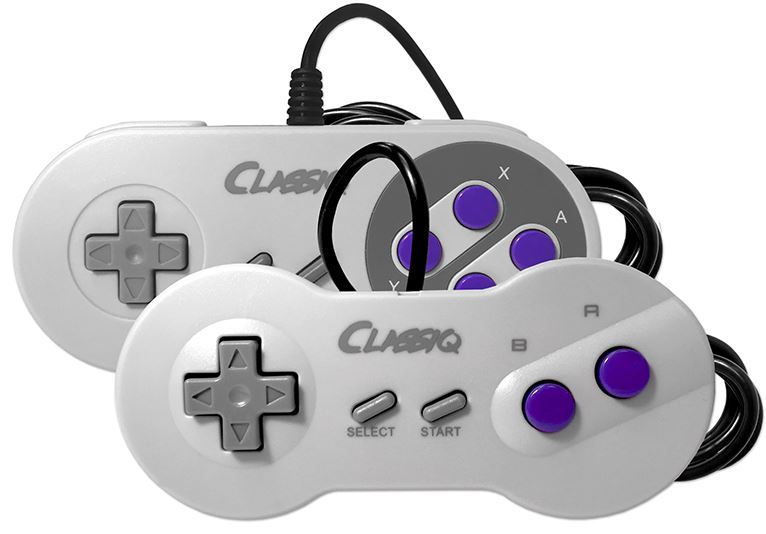 One small complaint with this design. The aspect ratio switch is considerably larger than usual. It’s presented more like a feature, and less like an afterthought. That’s nice, but it also makes it a little easier to bump on accident.

The Old Skool Classiq 2 HD has a passing resemblance to the SNES, though not particularly to the SNES. Appearances aside, this equipment comes close to providing the best of both worlds. Though it would’ve been nice to have included onboard storage with a couple of games, that would’ve instantly accelerated the price of this console, especially considering it’s coming from a third party manufacturer.

The Old Skool Classiq 2 HD is almost twice as expensive as the Gamerz Tek console. Because the former can play NES games, while the latter cannot. It’s an amazing value because it gives you two consoles in one. Whether you’re interested in a perfectly faithful recreation of the NES/SNES, or you’re looking for something simpler, it provides you with options. That makes it a great choice for someone who wants to emulate both consoles.

The Gamerz Tek 16-BIT HD Entertainment System isn’t going to help you play NES games. But from top to bottom, it’s a pretty faithful recreation of the SNES. The only part of the imitation that totally fails is its price. This console costs about one tenth what an SNES cost when it was released. Beyond that, this console rides the line between smart modernization and maintaining classic authenticity. That makes it a great choice for people who are looking for an affordable way to play their old SNES titles.