If you’re a resident of a street or neighborhood with a lot of traffic, you probably already know how much of a menace speeding vehicles can be. You can build speed bumps and place “slow” signs and people will still whiz by, often times well over the posted speed limit.

You can also contact your local police department and ask for more enforcement. However, this is just one approach. Police officers can’t be there all the time. The most effective, best way to get cars to actually slow down is a combination of methods. Simply put, speed bumps are effective and so are extra traffic officers, but these aren’t always a complete solution.

That being said, many homeowners opt to take matters into their own hands. Now, we’re not talking about vigilante justice such as throwing spike strips down; that would be a bit overboard. However, installing a digital radar speed sign is often one of the single-most effective deterrents for speeding vehicles.

By placing a digital read-out of passing drivers’ actual speed, it’ll subconsciously make them slow down. In fact, you’ve probably driven by signs like these, yourself. Admit it – when you see a giant read-out of your moving speed, the first thing it’ll make you do is slow down; especially if the sign is bright, bold and/or flashes at you. Often placed right next to a posted speed limit sign, it’s clear that these are very effective in what they do.

Acquiring a radar speed sign for your street or neighborhood is actually much easier than you might imagine. Although we recommend checking with your local authorities before doing so, posting a digital speed sign is often a happy sight for those who live near you. For speeding cars and jerks behind the wheel, not so much. But that’s the point – they’re mostly effective when used in busy, problematic areas.

Luckily, there are a few great options available for those who want to use one on their street. Whether you own a house, business or operate a church/daycare in the neighborhood, a digital radar speed sign is a smart investment. Although they tend to be a bit expensive, they’re readily available for purchase online.

Today we’re going to take a look at some of the best radar speed signs currently available. We’ll discuss each one in great depth and go over each of their specifications and features. Ultimately, after reading this article, you’ll have a better idea of what’s available, how they operate and which one you should invest in. Let’s get right into it! 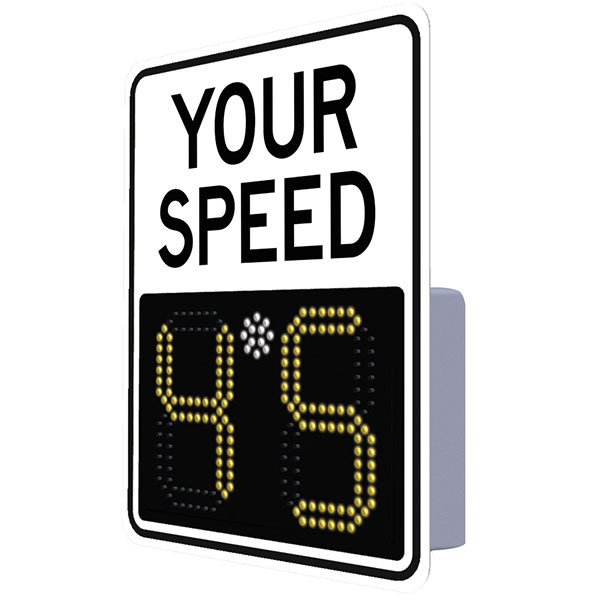 The SafePace Evolution Radar Feedback Sign is a well-designed unit that’s perfect for a wide variety of streets. Measuring 29 inches tall, 23 inches wide and 5.625 inches deep, it’s a good size that can be attached to virtually any pole or sign. With 11 inch digits and 98 LEDs per digit, it’s large and bright enough to easily readable from several blocks away.

With a pickup distance of 300 feet, vehicles will automatically be “clocked” as they’re driving by. In turn, their actual speed will be displayed in real-time directly beneath a static “your speed” message. Both MPH and KPH can be displayed with a simple switch that’s located on the backside. If they’re going over the speed limit, you can opt to utilize the “strobe” feature. This will rapidly flash a white cluster of LEDs to get the drivers’ attention. 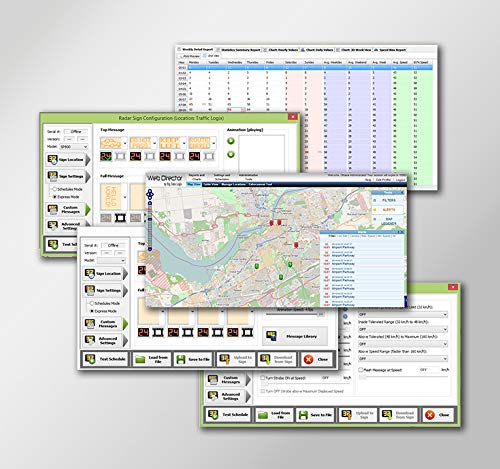 In addition, with the optional Safe Pace Data Collection, users can connect via Bluetooth and retain traffic data over time. In fact, 1 full year of cloud connectivity is also included, which makes collaborating with neighbors or authority quite simple. 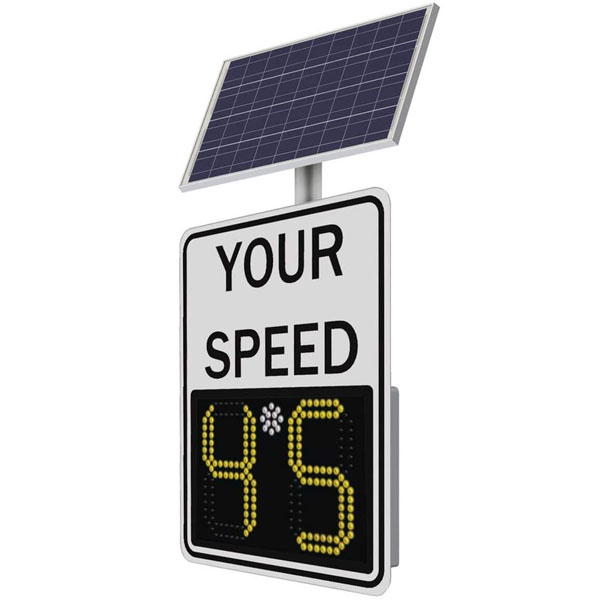 Although it costs an extra $700, it’s well worth it. Especially for locations where power isn’t readily accessible. With it, the 20W solar panel version includes an internal battery that keeps it operating throughout the night. The two versions are identical, with the only difference being the way that they’re powered.

While the SafePace Evolution is indeed quite expensive, it’s actually one of the more affordable options available. All in all, it boasts quite a bit of versatility. In addition, there are several accessories available that make mounting easy. While you can opt to use the included straps, a more permanent solution would be to install it using SafePace’s very own universal mounting bracket. Unfortunately, it’s sold separately and somewhat difficult to find available. 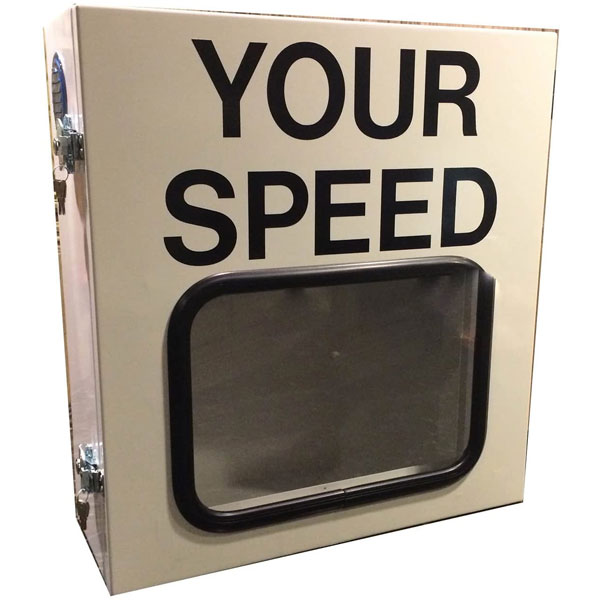 The SpeedCom Safety Sentinel Radar Speed Sign is another excellent option. Measuring 20.5 inches tall, 21.6 inches wide and 5.9 inches deep, it’s slightly smaller than the aforementioned. That said, there are 78 individual LEDs per digit with a diagonal measurement of 15 inches for the two digits combined.

The pickup distance is ~400 feet and works exactly as expected. Driving towards the sign, it’ll clock speed using a front-facing radar and immediately display it in real time. The entire front panel opens up with hinges on one side and keyed locks and latches on the other. Inside, there’s access to manual adjustment for MPH/KPH as well as access to all of the internal components.

The radar points forward and is set discreetly within the first digit. Next to his, built into the right digit, is a super-bright bulb that flashes when the set speed limit is violated. It’s very bright, in fact, even brighter than the SafePace Evolution. There’s no excuse if it doesn’t get your attention. The static “your speed” writing is large, bold and clearly distinguished from a far distance. In addition, the LED display is set within a bold black frame that adds to the overall visibility.

Best of all, data collection software is included. It’ll automatically log all of the times, speed and instances that it was activated. With this data, you can study and ultimately determine the average speeds, busiest hours of the day, etc.

The standard version of the SpeedCom Safety Sentinel is powered via a standard 110~240V power cord that’s included in the box. However, there’s also a solar powered version that’s now available. 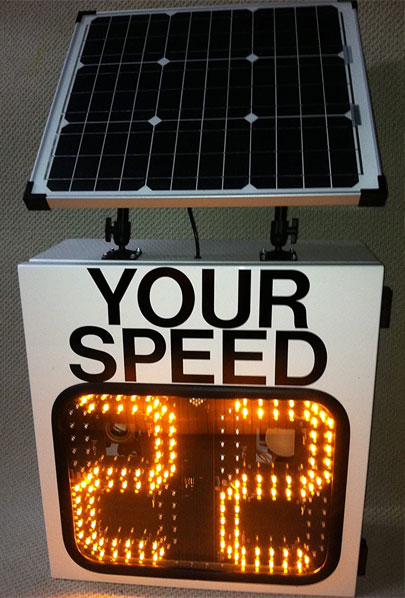 However, the solar powered version costs an additional $1700. This is a steep upgrade, but well worth it for many instances. It includes a 25W solar panel that’s modularly mounted to the top of the sign. At the two points where it’s connected, there’s a wing screw that’s easily adjusted to control the angle of the panel. After all, the more perpendicular to the sun that it’s positioned, the more efficiency it’ll have.

Installation is fairly easy, thanks to the included one bolt mount and hardware. It contains a solid metal plate with four separate holes. Through them, you can permanently mount it to virtually any pole or existing sign. This mounting option also makes it possible for you to engineer your own custom solution if you desire to do so. 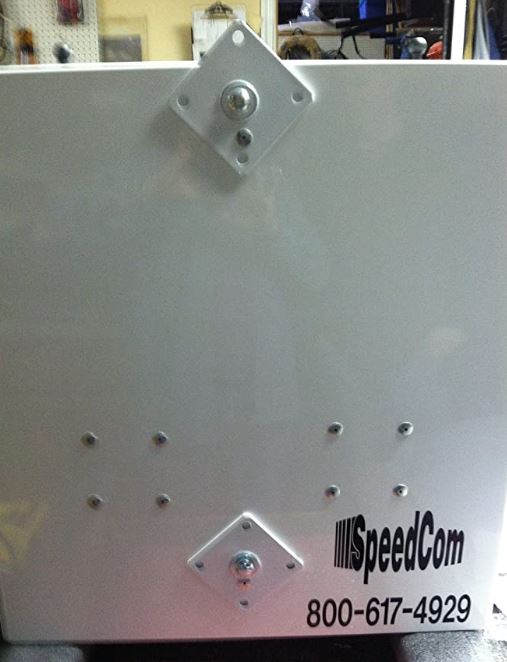 Best of all, SpeedCom includes a one year warranty on all of the parts and labor. This is nice to have as extra assurance, especially considering it’s definitely a bit of an investment at its price-point.

As you can see, there are only a couple of worthwhile radar speed signs that are available to the general public. Regardless, both options are very good choices.

The SafePace Evolution Radar Feedback Sign is well-suited in most regards. It’s large, bright and easy to use. While most of the accessories and upgrades are sold separately, it offers a lot of nice features that are all very practical. The solar-powered version is well worth the upgrade, especially if you don’t have access to AC power.

The SpeedCom Safety Sentinel is another great choice. Although it’s a bit more expensive, it includes data logging software and mounting hardware that would otherwise be considered an upgrade. Compared to the SafePace, the pickup distance is slightly longer and the strobe function is a bit brighter. The overall build-quality is heavy duty with a secure locking and latch mechanism that keeps the internal components safe and accessible for only those with a key. Regardless, a solar-powered version is also available, but it’s a steep $1700 extra.

Either option will likely suit your community’s needs quite well. While these are definitely expensive investments, a radar speed sign can prevent long-term occurrence of speeding cars. If they don’t seem to be within your budget, many neighbors are usually happy to all pitch-in. Especially if your streets have a consistent issue with drivers with no regard for