People tend to want their earbuds to be versatile. You don’t want to have to spend too much time micromanaging the battery, worrying about water, or otherwise babysitting them. You do want them to hold up pretty well for as long as you can manage to avoid losing or destroying them.

Many people are only starting to get familiar with ANC technology. For others, it’s been essential for a couple of years already. A person’s relationship to ANC really depends on the kinds of noises they’re trying to rid themselves of hearing. Because when you’re trying to block out shrill sounds, like the sound of a small dog barking, you’re going to be better off using memory foam ear tips than active noise cancellation. 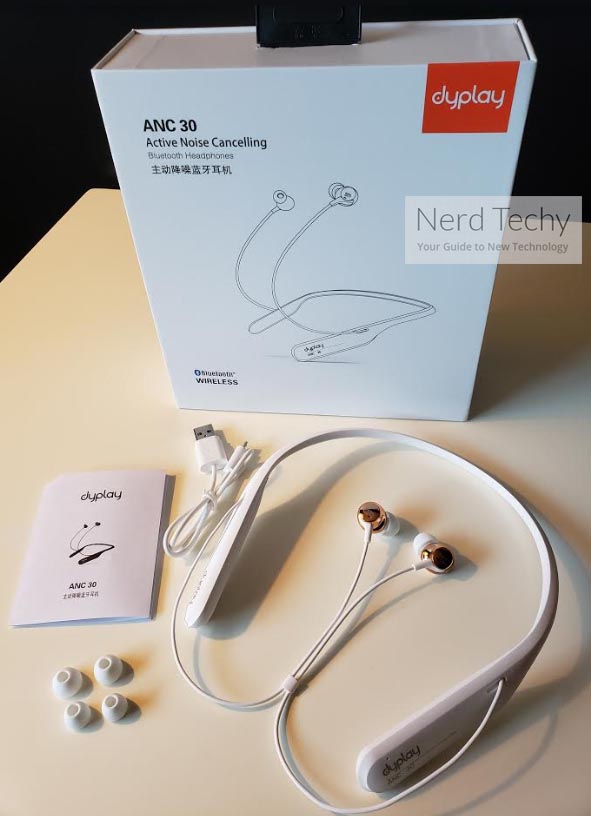 Even though many people are only starting to become familiar with ANC technology, the Dyplay ANC 30 Neckband Bluetooth Headphones actually feel like they’re second generation technology. Because most earbuds in this price range that take advantage of ANC tend to provide a slightly underwhelming ANC experience. The technology takes some work to master, which is why for the time being, only large brands like Bose tend to be able to do it extremely well.

But these headphones show that cheaper, lesser known brands are staring to catch up. Though neckband headphones aren’t quite as portable as true wireless earbuds, having a neckband provides a lot of storage space for a slightly larger battery. Which is something that can be important if you really want to use ANC on a regular basis. 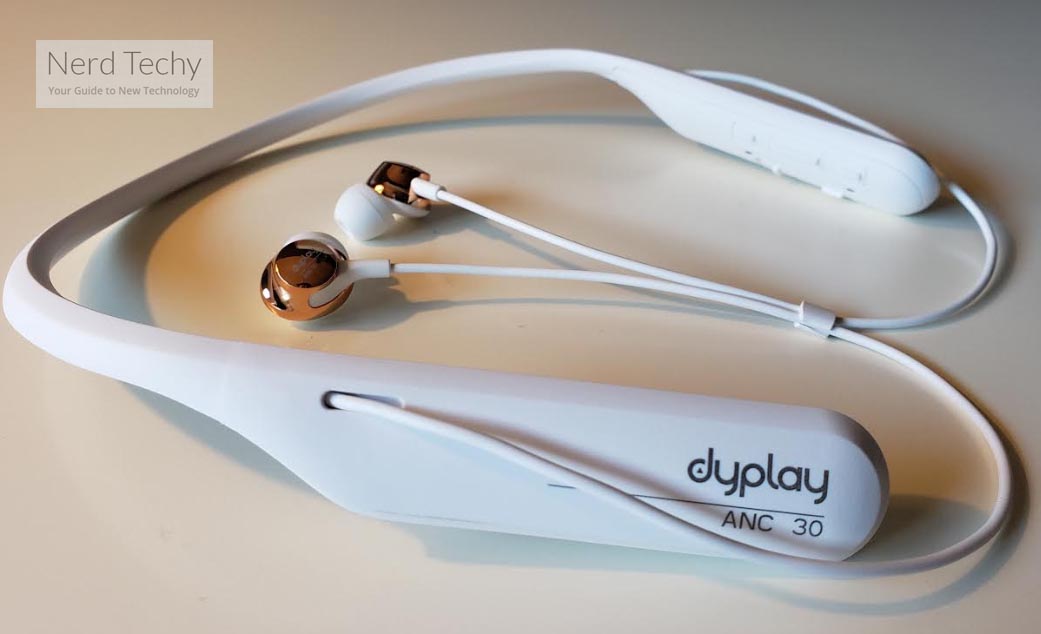 Aesthetically speaking, these earbuds are available in either black or white. The white version uses stylish golden plates for the exterior of the ear-tips. The black version is rather bland and professional looking, with really nothing to help them stand out from a physical perspective. But that’s perfect for people who are looking for something that looks professional.

These earbuds were built with what you could call a splash proof design. They’re not technically sealed up; they’re not truly watertight. The nano-coating protects them from rain and sweat pretty well, but at the end of the day you’re looking at an IPX4 certification, which means you’ve got a few limitations. 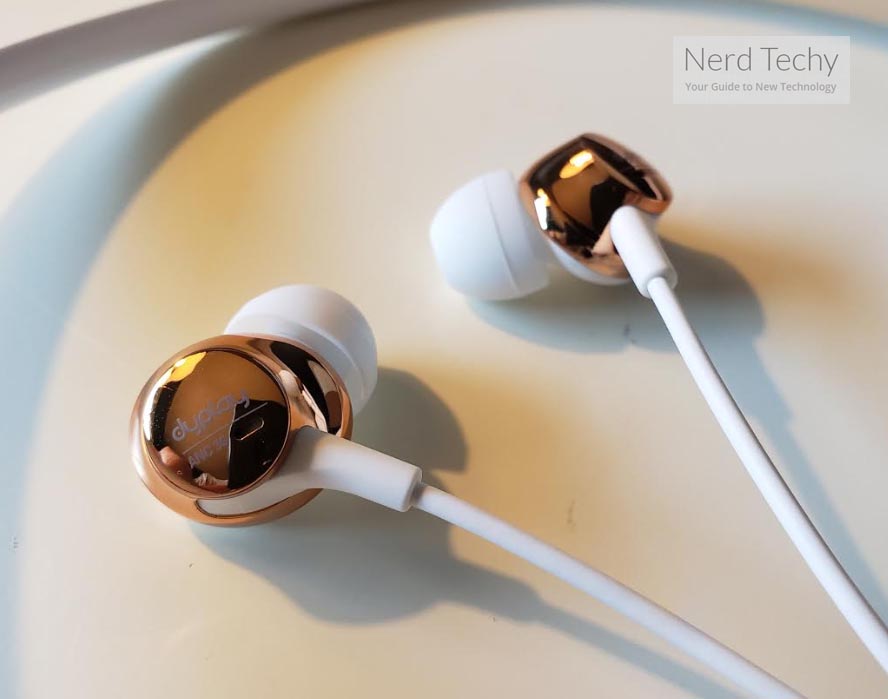 You wouldn’t want to take these earbuds and go for a dip in the pool, nor would you want to wear them into a shower. But short of that, you don’t have to concern yourself with the kind of common water hazards that might affect earbuds in most day-to-day circumstances.

The small bit of wiring that connects the earbuds to the neckband is actually pretty robust. Though not braided because that would probably start detracting from the portability of the headset. The neckband is reasonably comfortable, but it’s hard to give Dyplay any credit for that because it’s mostly the result of the material they’ve used. It’s the kind of soft and malleable silicone that most headphone manufactures end up using for their neckbands. Pretty ordinary stuff. 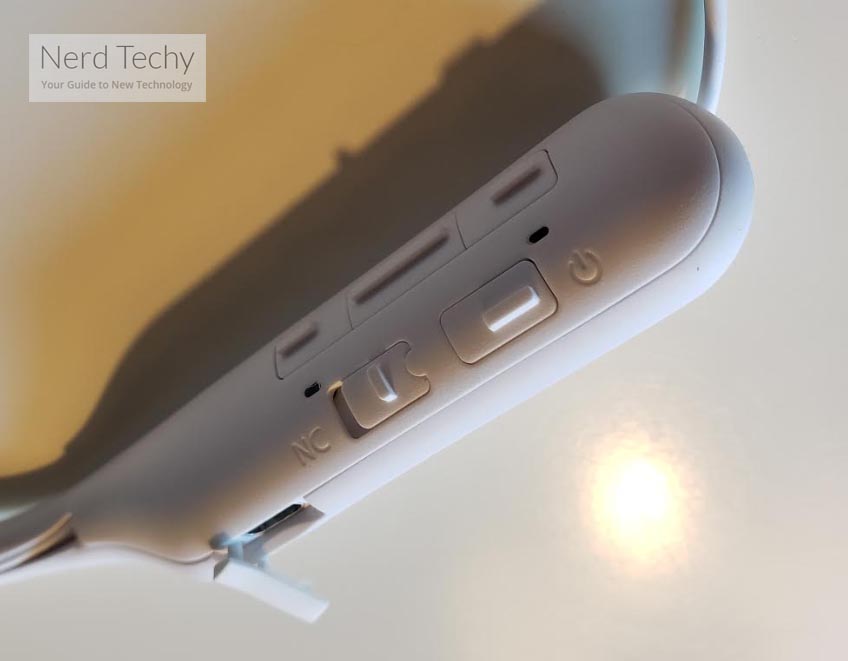 Speaking of comfort, these earbuds include a number of ear-tips to help ensure they fit just as well inside your ear canal. Though it does take a couple of minutes, its often worth trying out all of the included ear-tip sizes. Because it’s not like these parts are totally standardized between different manufacturers – a medium tip for one brand is a large tip for another. It can be tough to predict which works best for you until you’ve given them some use.

Of course, not all comfort is a matter of using soft materials. You also want to avoid the anxiety of feeling as though your earbuds might pop out of your ear at any time while you’re using them in some active capacity. Another thing the Dyplay ANC 30 Neckband Bluetooth Headphones were designed around is what you could call active comfort. 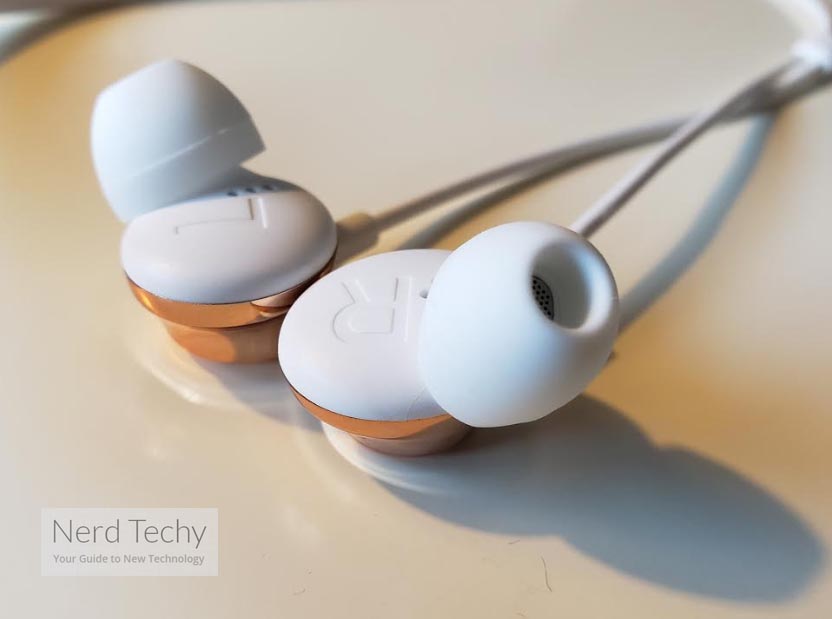 In short, they’re made to stay secure in your ears so you don’t have to worry about them slipping out, and without sacrificing a bunch of comfort along the way. Though the slightly tight seal means these earbuds do have the potential to be a little less comfortable for 4-5 hours of straight use.

One thing missing from this kit? It does not include any memory foam ear tips, which is an increasingly common variety. However, the inclusion of memory foam ear tips would be slightly redundant because these headphones are constructed around ANC. But it’s worth pointing out because it’s always nice to have options, isn’t it? Especially if you want to be able to block high-pitched sounds.

These earbuds allow you to get wireless connectivity with the assistance of Bluetooth 4.1. Basically, that means you generally don’t have to worry about your audio or calls being dropped. You don’t get every single advantage of newer versions of the Bluetooth format, like Bluetooth 5. But in the case of semi-wired earbuds like these, that’s less of a concern.

One modest limitation to keep in mind — you get wireless connectivity out to around 30 feet. That working distance depends on line of sight, so if you start to introduce any number of obstacles between the signal, you’ll encounter issues. 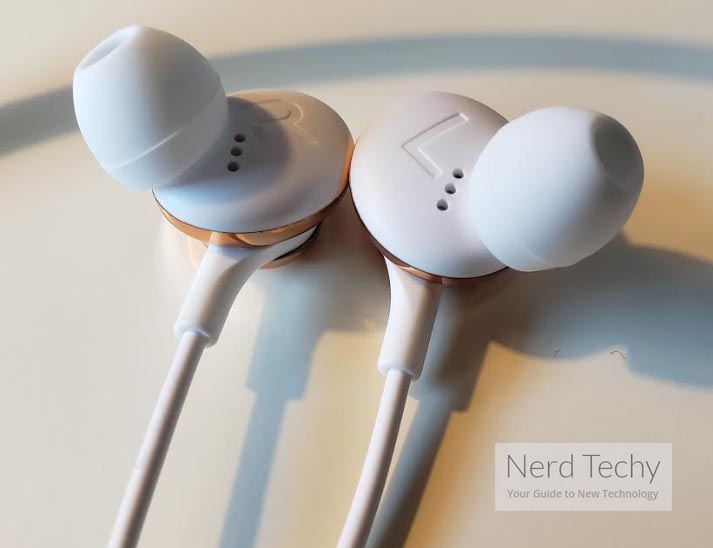 The ANC 30 Neckband Headphones have their sound quality driven by triple frequency equilibrium audio drivers, which help to make their feedback feel just a little but smoother. With a diaphragm constructed around a magnesium dome, backed by liquid crystal polymer drivers, these headphones have a slightly above-average audio construction that allows them to provide a slightly above-average sound quality.

The resulting combination helps support 120kHz playback for all the high definition audio your ears can handle. Pretty impressive for earbuds in this price range, actually. And the low-frequency approach to design ensures you don’t encounter audio delay while you’re using the earbuds. Avoiding delays can be critical for basically any type of media where voices are involved, from movies and news broadcasts to almost any other television show.

But no small part of the reason why these headphones sound as good as they do is because they can provide such effective noise isolation. Which brings us to the ANC. 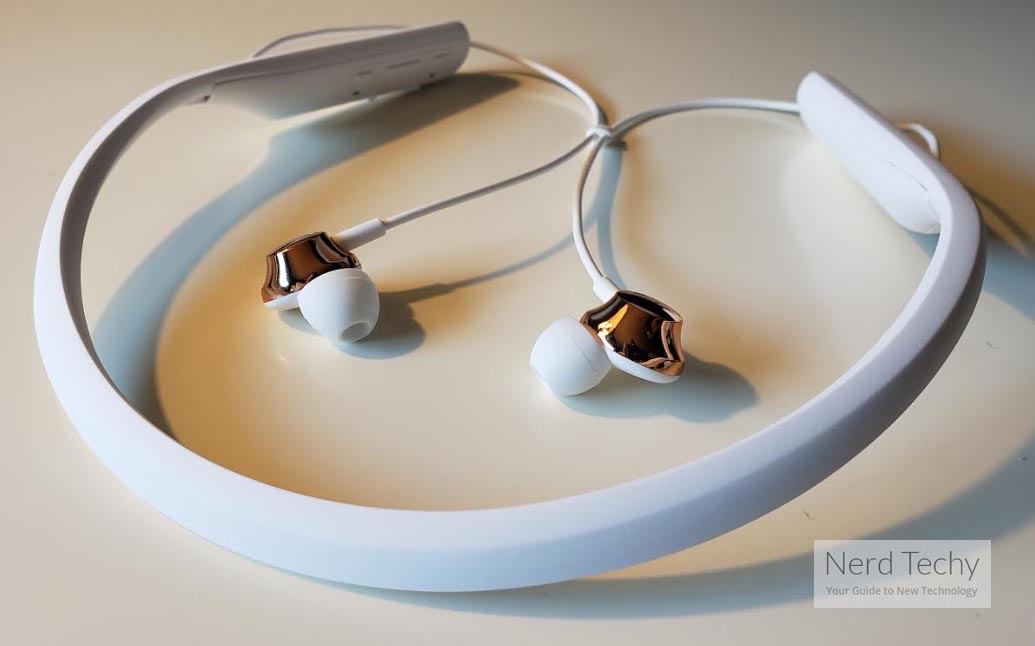 However, ANC isn’t very good for blocking out high-pitched treble. And it only lightly masks voices by stripping them of some bass, but isn’t particularly good at eliminating them. In other words, ANC can be great for eliminating a huge variety of different ambient noise, especially things like traffic. But there are all kinds of sounds that slip through, to some degree or another.

In this case, you’ll find the ANC is capable of about 24dB noise reduction. Technically speaking, that estimation isn’t actually correct because ANC affects different types of noise in different ways. For certain sounds, you’ll see literally no reduction, for other sounds, you can basically make them vanish entirely.

But for many different types of listening environments, 24dB is experientially about right. Not quite as much noise blocking as a pair of foam earplugs, but in that neighborhood. And surprisingly effective when used independently of music, which is uncommon. 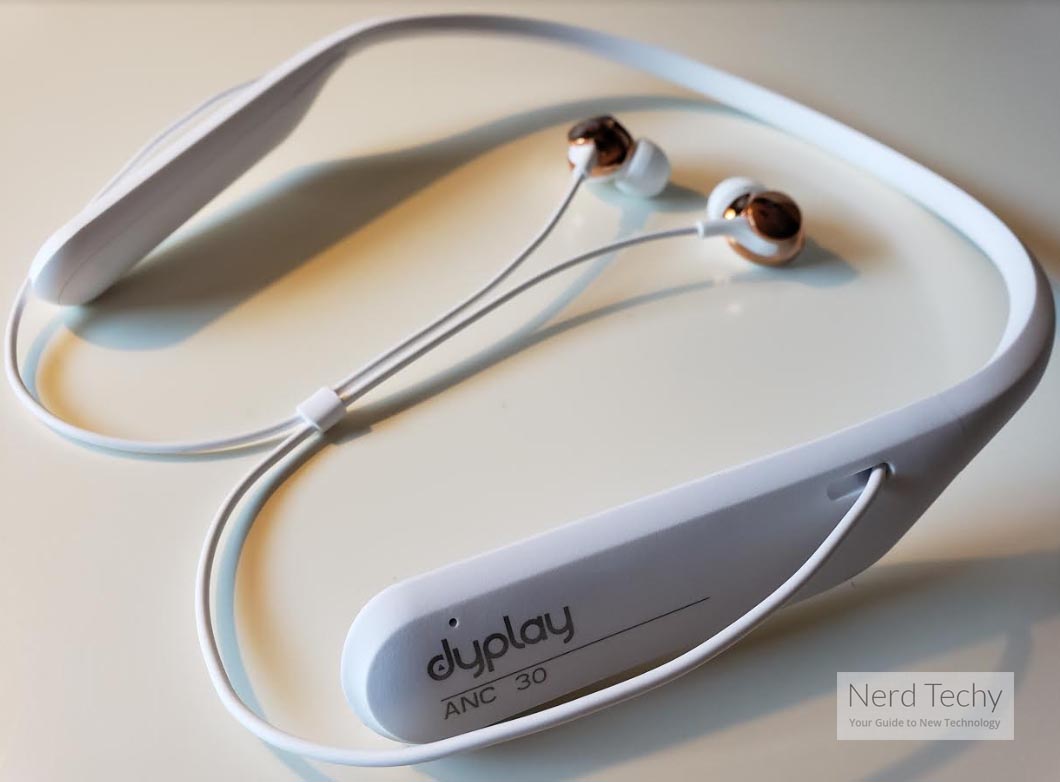 These earbuds are constructed with 12 hours of playtime, but there’s a lot of assumptions in that statement. For starters, you’re working with a pretty hefty 190mAh lithium-ion battery. A good starting point. But the 12-hour estimate it assumes that you’re not actually using the ANC.

When you flip on the ANC, you’ll find the battery lifespan immediately swings down towards a maximum of 9-hours. Raise your volume all the way up? The battery will drop down closer to 6-hours. Still, that’s high-average for similar pairs of earbuds under similar circumstances.

One more limitation to keep in mind is that you can’t enter some kind of true-wireless mode, which would allow you to discontinue use of the Bluetooth connection and start saving some extra battery life. That’s a feature you’ll find on another headset we looked at recently, the Back Bay EQ 40. Though in comparison, Dyplay ANC 30 Headphones actually have a better battery lifespan, overall.

These earbuds take about two full hours to recharge. That’s a bit longer than usual, which is probably related to the slightly larger battery capacity. The battery also supports 200-hours of standby time, which is reasonably lengthy when compared to similar audio gear.

Unfortunately, the microphone performs exactly like what it is, which is an afterthought. They clearly didn’t make much of an effort to distinguish their calling features. You don’t find native support for voice assistants, nor will you find cVc voice cancelling technologies, or even dual microphone support.

Dyplay’s ANC headphones don’t really offer any room for expandability. You can’t add on a charging case, or something like that. There isn’t much in the way of software expansion opportunities, either. Dyplay doesn’t have their own app for these earbuds. Though if you really wanted to use an equalizer, finding one wouldn’t be terribly difficult.

These earbuds include a micro USB charging cable that runs about eight inches. They also include those silicone ear tips mentioned earlier, a user manual, and three pairs of ear tips. 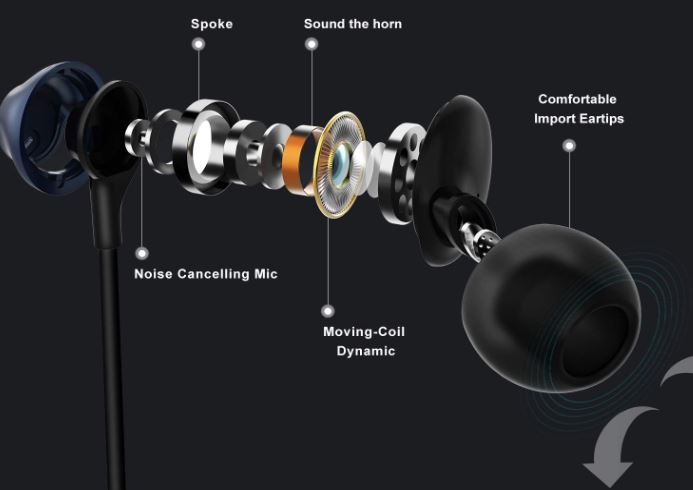 All in all, Dyplay ANC 30 Neckband Bluetooth Headphones ended up having two or three good strengths. But they also have about two or three weaknesses. With respect to their weaknesses, you’ll find their microphone is entirely mediocre. It would be an exaggeration to say these headphones are uncomfortable, but because their comfort is about average for earbuds in this price range, you can’t exactly call comfort one of their strengths.

What do they get right? Well, their wireless connectivity is rock solid. The battery lifespan is slightly above-average. And the ANC is pretty impressive. For someone who places a high value on noise isolation, that makes these earbuds a potentially excellent choice.