Fused filament fabrication is actually pretty simple. A printing machine takes some material and lays it down. It adds a few more layers, then introduces some heat or adhesion to help fuse those layers into a single piece. How much simpler could it get?

The problem is almost just as simple to understand. Layers which are stacked in this manner will be weaker in some directions than others. They can also be tougher to work upon in some directions than others. That’s when building 3D objects can become a little more hands-on, at least if you want to intervene to protect the structural integrity of larger printed objects.

Like so many things in life, the devil’s in the details. For better or worse, choosing an excellent 3D printer involves investigating every excruciating detail of the device. From its filaments and material support, to the various software platforms and viewing spaces it can provide, no detail can go overlooked.

Kodak has made a number of 3D printers before. The Kodak Portrait 3D Printer is a mixture of features we’ve seen before, features that have mostly been used on industrial scale equipment until recently, and features that are totally new. 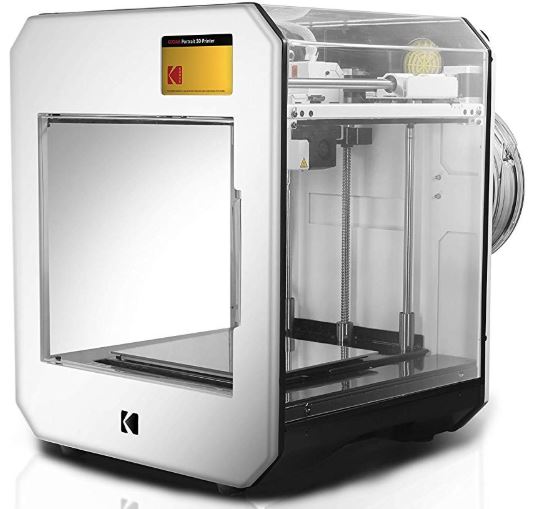 For example, the mechanical arrangement of the device uses a common Cartesian XY-head layout. But targeted the professional market, it also includes features like dual extrusion, or an automatic nozzle lifting feature. The list goes on to include all-metal hot ends, which are even interchangeable.

In addition to having a rich feature set, Portrait’s construction is exquisite. What nearly defines this printer is its mid-range print volume, its fully enclosed body, and its versatile filament system. With all of those things combined, the Kodak Portrait 3D Printer can actually blur the line between personal and professional 3D printing.

The Kodak Portrait 3D Printer looks amazingly futuristic, like something straight out of a movie. Its smart exterior is a collection of tempered glass, aluminum, and steel. The front and side window provide a 180-degree viewing space for the print job currently being constructed. 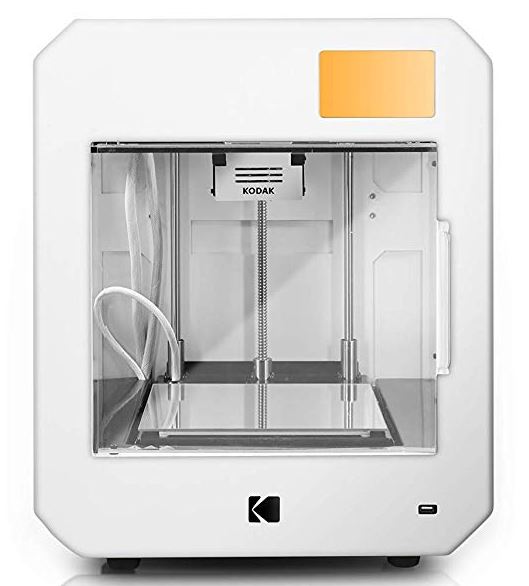 The side window extends to the top of the printer, allowing you to see the guts of the device in action. Thanks to removable glass surfaces, keeping the KODAK 3D Portrait looking its best isn’t tough to do. Being able to remove the glass is great for helping you gain access to internal components as well.

Appearances aside, the design is heavily utilitarian. Its outer dimensions measure 18 x 17 x 18-inches, while weighing 60lbs. The enormous weight is largely because the Kodak Portrait 3D Printer uses a frame that’s almost entirely made from steel. You probably don’t want to strike this printer with a truck, but it seems plausible it would survive that kind of interaction.

Internally, Portrait is complete with both a HEPA filter and a carbon filter, which makes it suitable to use in home or school environments. That filtering is possible thanks to the fully enclosed design, so you can use this printer safely without having to worry about pollutants. Even the distinctive smell of 3D printing is totally eliminated because the carbon filter can scrub scents from the air.

The KODAK Portrait 3D printer is built with a fully enclosed print chamber, which allows it to be temperature controlled. In addition to the wide viewing angles provided by glass exterior, there’s a built-in camera to help you monitor the progress of each print. 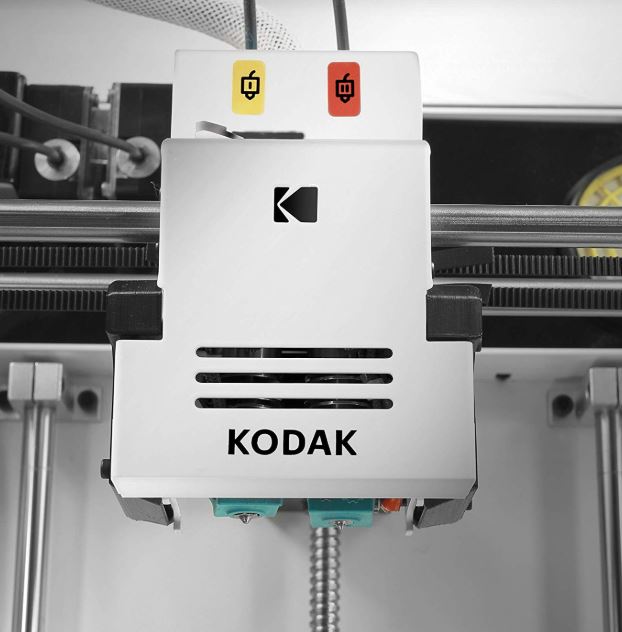 The Kodak Portrait 3D is capable of using PLA and ABS material. You can construct either with the help of fairly standard 1.75mm filaments. And the Portrait 3D Printer is compatible with third party filaments because it uses an open material system. Consequently, you’re not locked into the Kodak ecosystem, and you’re not dependent on some kind of proprietary product support.

However, Portrait does have its own cartridges and filaments which are specially designed to prevent the Kodak Portrait 3D Printer from absorbing dust or humidity. You may not want to try your luck with third party supplies.

Portrait offers a maximum print size of 8 x 8 x 10-inches, which is generally considered medium volume printing. And it can help you finish those larger print jobs quickly because of its dual extruder design.
That design uses lifting nozzles to help make sophisticated designs quickly, while also promoting a better finish on the surface. With multiple filaments working together, Portrait can provide a maximum print speed of 180mm/s, and a maximum travel speed of 300 mm/s. Speed like that certainly puts to shame many 3D printers.

Portrait provides fully automatic bed leveling, heated print-ends, print recovery, and even redundant filament sensors. With all that on board, there’s really very little micromanagement you have to do. 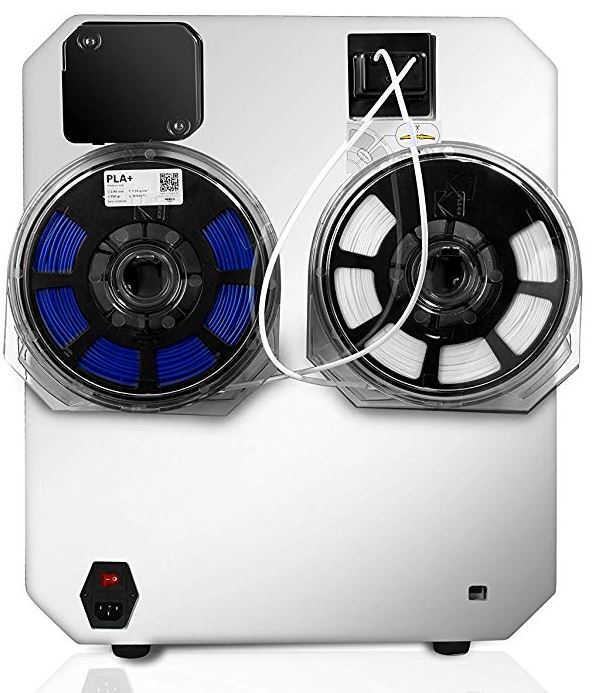 But like almost any top-shelf printer, the Kodak Portrait 3D Printer makes use of a touch screen display. From the display, you can setup and configure the printer, and access essentially every feature which Portrait has to offer.

The board is based on Raspberry Pi 3, which makes operation about as smooth as using a smartphone. The only common criticism you may hear is that the operating system’s aesthetic isn’t very attractive. In fact, some would say it looks primitive.

Those minor complaints aside, the Kodak Portrait 3D Printer also provides the entire range of connectivity options you’d expect from a modern printer. That includes USB connections, support for file sharing services, integrations with social networking, and so on. Basically, if the file is online, then you’ll be able to grab it.

You can connect with the KODAK Portrait 3D printer through Wi-Fi, USB, and Ethernet connections. It prefers the 2.4Ghz band, which should present a problem to few people, but is worth consideration for someone who may place their printer in an area with lots of local bandwidth on that band. Though, that problem can be totally eliminated by using a wired Ethernet connection. 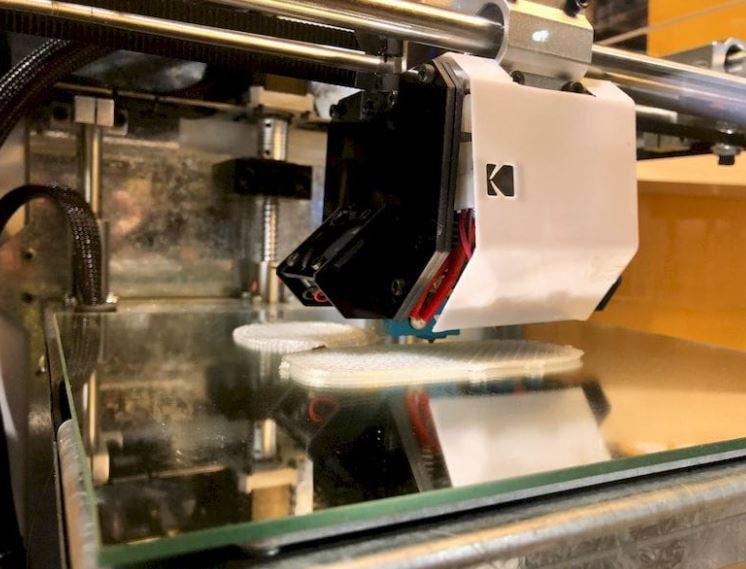 Kodak also has their own control app, allowing you to turn your mobile devices into a means of controlling the Portrait 3D printer. In terms of its functionality, the control app does essentially the same things as the touch screen display. You can access almost every feature the Kodak Portrait 3D printer has to offer, including all of the various web connectivity options.

But like the touchscreen interface itself, the app is terribly utilitarian. It feels like business equipment as opposed to something intended to be handled by the average consumer. Though this feeling doesn’t actually interfere with operation, it does stand out in a world of increasingly fine-tuned and highly accessible menu windows.

Printing a document on an ordinary printer is very easy. Printing a complex object in a 3D printer can be more difficult, if only because it may involve more hands-on time with the project. Similar to helping feed paper through a printer, you may find yourself rotating or re-configuring the models and objects which you’re constructing.

The Kodak Portrait 3D printer goes out of its way to make this easy for you. That’s largely achieved in details already mentioned, like the removable glass windows. But the accumulation of these types of features makes the process of printing as easy as possible. And because there are fewer hurtles in your path, you typically end up with very high quality prints.

Though few praises need to be sung for print quality. The Kodak Portrait 3D printer and its dual extrusion system performs on par with many printers constructed for large-scale tasks. In terms of its capabilities, the equipment nearly speaks for itself. Whether you’re trying to build objects with ornate detail, or you’re primarily concerned with structural integrity, Portrait can handle almost anything. And because Portrait is doing all the heavy lifting, there’s really very little room for error. 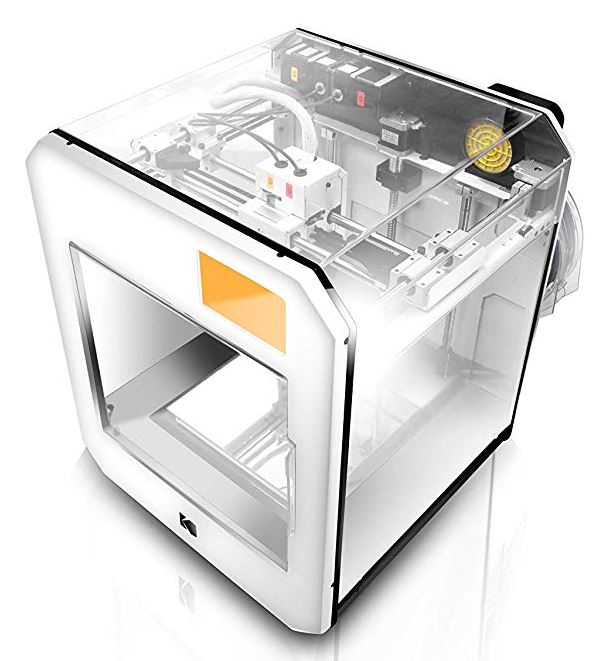 Though this machine is somewhat complicated, and has several parts that can be replaced or swapped out, the Kodak Portrait 3D Printer comes fully assembled. And it doesn’t just start simple, it stays simple. That’s because it’s capable of automatic calibration and leveling, which helps to guarantee a smooth experience.

The machine itself is largely plug and play, especially because of support for Kodak 3D Cloud. From Kodak’s cloud app, you can monitor prints, or receive updates as things move along. It can help you stay in the loop as your larger projects are constructed, and alerted you the moment your attention is needed.

Kodak isn’t merely known for printing, but also for their great use of color. Through the touchscreen display, the Portrait 3D Printer supports a variety of presets, each appropriate for different types of material. And these settings can really help you get a running start on color prints, especially in the realm of shading and textures. 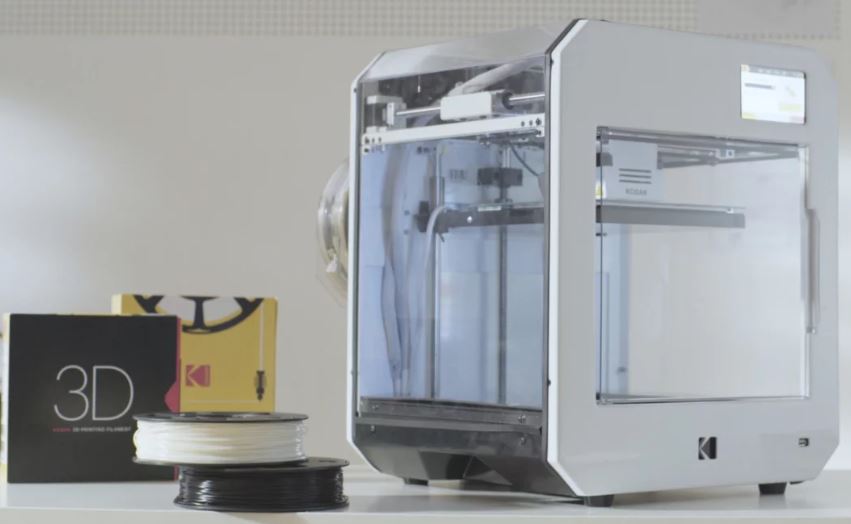 Who Should Choose the Kodak Portrait 3D Printer?

Its steel structure is emblematic of the overall uptime and low maintenance you may expect from this equipment. Though the Kodak Portrait 3D printer does little to disguise the fact it’s essentially industrial equipment, it looks great, and performs as great as it looks. Reliable is certainly the word that comes to mind first.

Though this printer has an outward appearance which says professional use, it has a price tag that’s within the reach of enthusiasts. It would be equally welcome in a classroom, home, or industrial setting. For anyone who’s serious about creating amazing detail within medium-volume 3D prints, the Kodak Portrait 3D Printer is worthy of real consideration.

Helpful Guide to the Best Trackball Mouse for …
August 2, 2021