At NerdTechy, we’re always looking for way to improve our home network connection. After all, we wouldn’t be here if it wasn’t for the internet. Although wireless networking has saved us from having to pull cables throughout our entire house, it has introduced a few new problems.

First, when you’re connecting to a single point on a home network, the signal has to pass through walls and floors that sit between you and the router. If you’re in a dense urban area, you’ll have many other routers and networking devices competing for the same portions of the wireless networking spectrum as you. There are several solutions to this, many of which we’ve reviewed before. But another contender has entered into the marketplace, promising to further improve wireless network extenders.

Plume WiFi is a unique technology that follows similar principles as other mesh networking devices, with a couple twists. We’ll be putting their system to the test to see if it really can improve your network performance in challenging conditions. 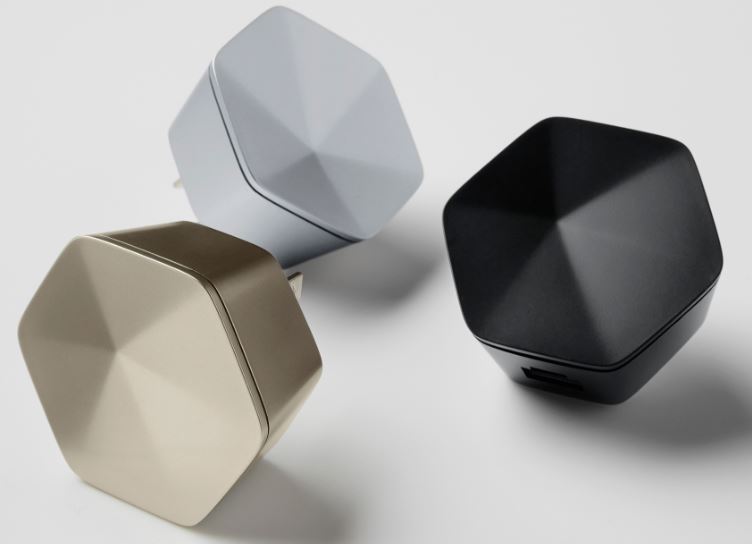 As soon as we opened the box, we knew that the Plume WiFi was little different than its competitors. Most systems have a base station which serves as a focal point for your entire network. The signal starts in one place, and is rebroadcast throughout the house by the extenders. With the Plume, there is no difference between the base station and the extenders. Every module in your home is exactly the same. Instead of buying a hit that has one, three, or five units, you simply buy as many Plume modules as you need.

Almost every manufacturer claims that their product is “unlike anything on the market”, but Plume really means it. Each of the individual units are very attractive in design, and contrast strongly against what you’d expect a router to look like. The unit is hexagonal in shape, with each corner coming together into a point in the front. They call these modules “pods,” which is a surprisingly accurate way to describe them. Each pod is no larger than your typical transformer, and plugs right into any electrical outlet. On the bottom you’ve got a WAN port, which can also be configured as a LAN port depending on how you it sets itself up. 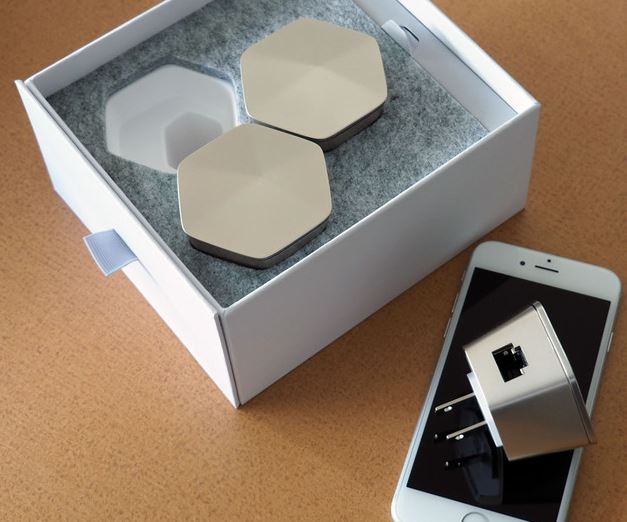 Aside from those two functional elements, the rest of the pod is designed to be simply beautiful. It’s made from metal, giving it a sleek modern appearance. If it was shrunk down to size, we could easily see this exact design being sold as artistic cufflinks or any other luxury product. Since you’ll be smattering your walls with these little guys, you’ll have a lot of time to appreciate how good they look.

The Plume runs on the 802.11ac protocol, which is currently the latest available. When selecting any kind of wireless system, the important thing to remember is that not all networks are alike. 802.11ac technology is a little further ahead today than it was a year ago. The Plume has AC1200 Gigabit WiFi which is capable of 300 Mbps on the 2.4Ghz channel and 867 Mbps on the 5 Ghz channel. Most modern computers are capable of streaming both of these channels simultaneously, so you can take full advantage of the connection speed. 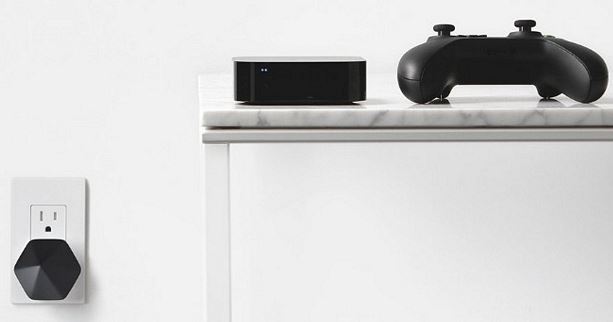 The Plume also supports a technology called MIMO, or Mulitple Input Multiple Output. MIMO, in essence, means that each pod is running two networks at once. If you and a friend are in the same room, the pod can give each of you your own separate network connection. What you do on your phone won’t affect the performance on what they do with theirs. This avoids a problem called channel crowding. To understand what we mean, think about trying to merge on the highway. If one person is constantly sending and receiving packets as quickly as the channel has room for, your device will have to wait for a break in the connection so it can take a turn to transmit data. When the channels are isolated, you can both send as much data as you need. 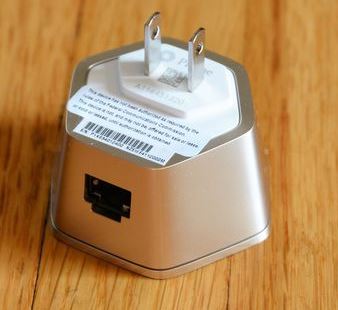 With some routers and networking systems, QoS is just a simple part of the built-in networking technology. While all routers have QoS systems designed to prioritize your networking performance, Plume goes above and beyond what is considered standard. To understand how the Plume can improve your network, let’s first take a look at what exactly makes a network ‘good’. There are two ways to measure performance: bandwidth and ping. Ping is the amount of time between a request and a response. If you’ve ever sat there waiting for a website to load while the browser said “connecting”, that’s a bad ping. Once you do get a response, the rate at which data is transferred is the bandwidth.

Distance and obstruction is the most common reason for bandwidth issues. The farther the signal has to travel, the slower it gets. This issue is made worse when it has to travel through walls. Mesh networking is the most obvious solution to the problem. When there is too much distance between to devices, you put something in the middle. Device A communicates with device B, which passes the message on to you. This does a great job of improving the bandwidth. The disadvantage is that it increases your ping time in the same way your tavel time increases when you have to stop for gas. 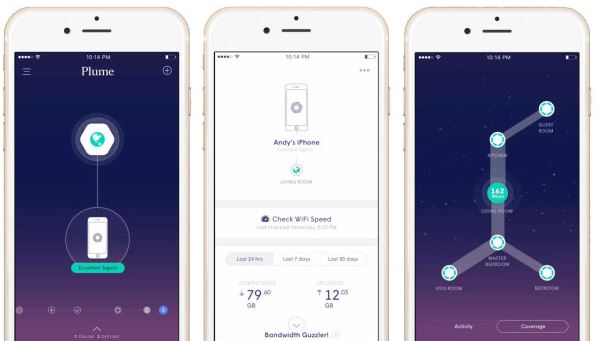 The solution to this problem is what Plume refers to as channel hop. See, typically mesh networking devices connect to the strongest signal they can find. So your computer connects to the closest transceiver, which then connects to the one closest to that, and so on until you reach the base station. The end result is great bandwidth, but terrible ping speed.

We’re at a point where additional bandwidth is useless to some consumers. And Plume is programmed to know exactly how much bandwidth each application needs. If you’re just sending an email, the difference between 1000 Mbps and 10 Mbps could be imperceptible. Instead, the additional ping time would be greater than the time saved from the high bandwidth. In these cases, Plume sends the signal as far as it can to reduce the number of hops, cutting your Ping speed down by a significant margin. This is done on a case by case basis. If you’re transferring a massive 4K video file, bandwidth will be prioritized. This means that no matter what you’re doing, you’ll always get the best connection possible. 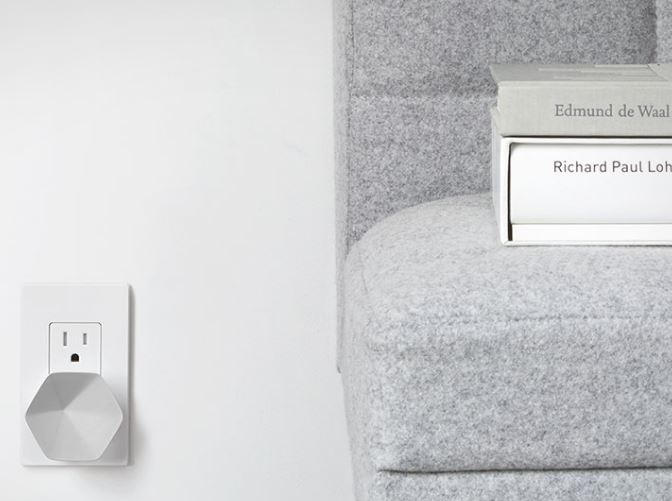 Despite how advanced this networking system is, the Plume is an absolute breeze to set up. The first step is to plug in a Plume into each room. Remember, since it can dynamically skip ‘hops’ to give you the best connection possible, the more you have the more possible routes the system can take. Having one in each room also cancels out the problems with walls, so your signal won’t degrade quite as much. You then plug in your modem to one of the Pods.

That is literally it. If you wanted to, you could get on the network right away. At first connection, you’ll be asked to choose a password. But one form and one button has you up and running. But where do you plug in your modem? Anywhere you want to! The Plume automatically determines if the pod is a LAN or a WAN port based on the IP address. When you plug in your modem, the modem tries to assign an IP address to the plume. Then it says to itself “hey, I guess this is the main network” and it’s up and running. If you plug in an IPTV box or any other devices that’s searching for a connection, it knows that it’s being used as a WAN. This is one of those things that’s so simple in practice, we wonder why nobody’s thought of it before. 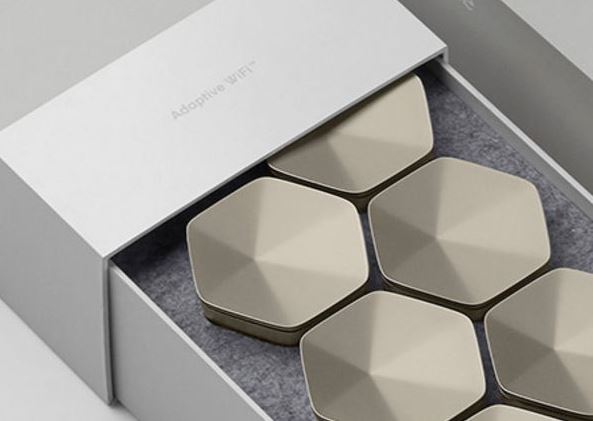 This isn’t one of the first WiFi extenders to hit the market, but it’s certainly one of the best. It’s the QoS system that really takes the cake. No matter which system you choose, you’re always being forced to make compromises. Just look at our reviews of the best whole home WiFi systems.

We mentioned that some devices were better for users who were streaming large files, others were better for users who were sharing the network with a lot of people. No matter which you choose, there was always trade-offs. The Plume is the first networking system that automatically changes it settings based on usage. But it’s not the software either. Need another room connected? Just add another Plume. Building your own network is as simple as plugging in a little device into each from. From there, Plume will do the rest.