Even though it’s terribly easy to overlook, the stand can be an integral part of a monitor. Adjustability is ultimately what will determine if you get the best possible view, and whether or not the monitor will get in your way.

Nearly every monitor on the market includes a stand. But most of those stands aren’t very good. Because most of the time, most people don’t pay attention to the stand. At least, until they get the monitor home, and the stock stand begins to under-perform. There’s a reason why so many people turn to third party monitor mounts.

Oddly enough, what makes the Samsung S27R750 and S32R750 stand out is they are both constructed with a special stand. It’s clearly intended to emulate a traditional wall-mounted monitor stand, but it’s actually less obtrusive than some of those kinds of installations. 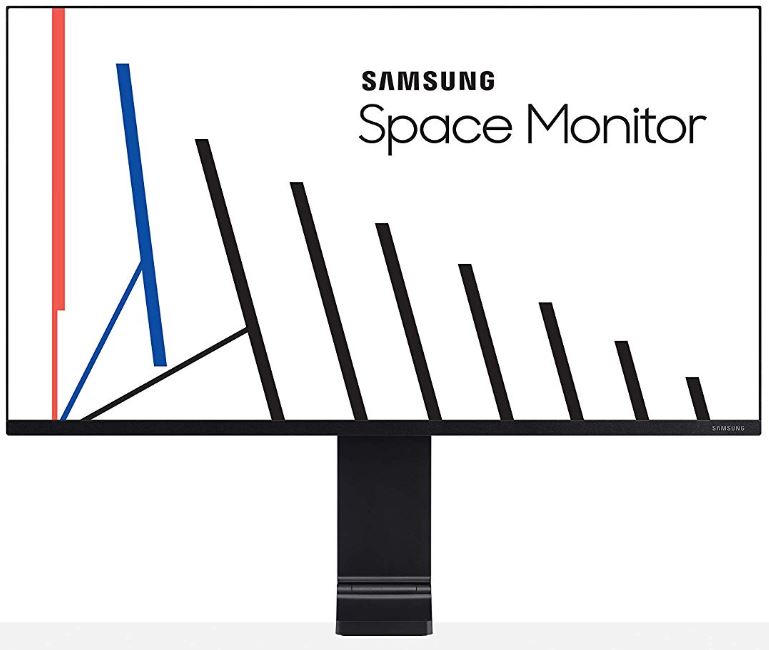 In fact, similar to many of the better third party stands on the market, this stand attaches itself to a desk by clamping down against the side of your workspace. The stability is great, provided that your desk is up to the task of having a monitor used in this fashion. Once in position, you’ll find the clamp keeps things anchored in place. 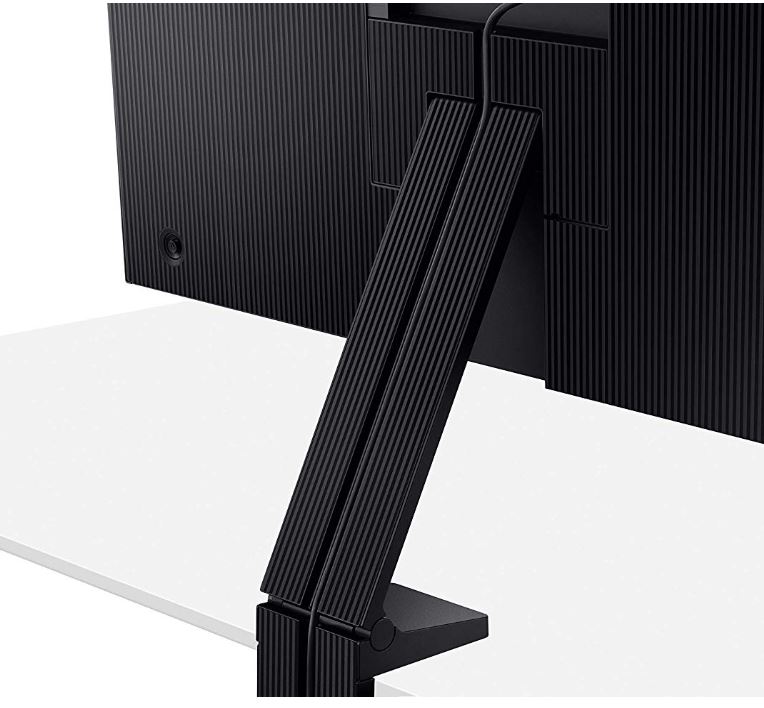 The S27R750 weighs about 12lbs, while the S32R750 comes in closer to 15lbs. The difference in weight pertains to their difference in size. Because these monitors offer their own mounting solution, you don’t need to worry about those weights being a tad on the heavy side. Though they are a little heavy because the power brick is built-in to the display.

Having the power brick stored inside the display is something you’ll appreciate when it comes time to run the power cable. The trade-off is that the display becomes a little less portable. But these monitors are inherently stationary, anyway.

There are a couple of limitations to keep in mind, with respect to the stand. The maximum spread of the clamp is 3.54”. If your desk is any thicker than that, then you’re not going to be able to force the clamp on. Likewise, it would probably be inadvisable to use desks that were prone to shaking. If you install it properly, the clamp won’t wiggle off. But placed on a wobbly desk, your monitor may shake while you type. 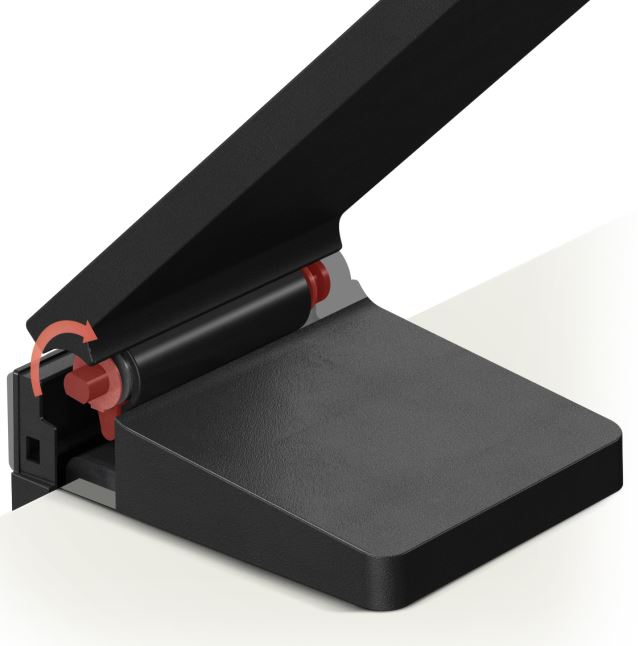 The stand is also built around a terrible robust and widely adaptable hinge. Physically speaking, the hinge is constructed from four industrial strength metal springs. The idea behind having such a sturdy hinge is to keep consistent and reliable motions, such that every adjustment of the panel feels the same.

Even though we’re just talking about a couple of springs, this design is actually Samsung’s proprietary technology, and it’s specially intended to withstand thousands upon thousands of adjustments. In short, the strength of the hinge means those movements remain smooth and precise now and in the future. 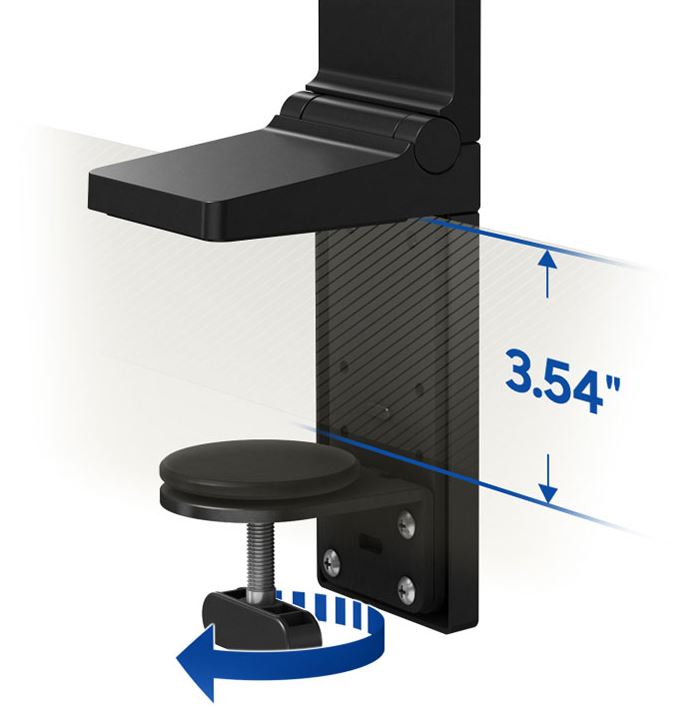 Samsung did at least one thing perfectly. They allow you to conceal your power and HDMI cables by running them down a cable-valley that’s built into the backside of the stand. These recessed channels allow you to keep your workspace looking clean and organized while also preventing clutter and tangled wires.

Further still, the backside of the panel has a large recessed area, which allows for cables to be positioned at a 90-degree angle.

Samsung has decided to call their bezel three-sided. It basically means the bottom side has an ordinary sized bezel, while the top and sides of the panel have a bezel-free design. It looks great, though it does make you wonder how many different ways they can describe bezels, since they’ve all become so thin. 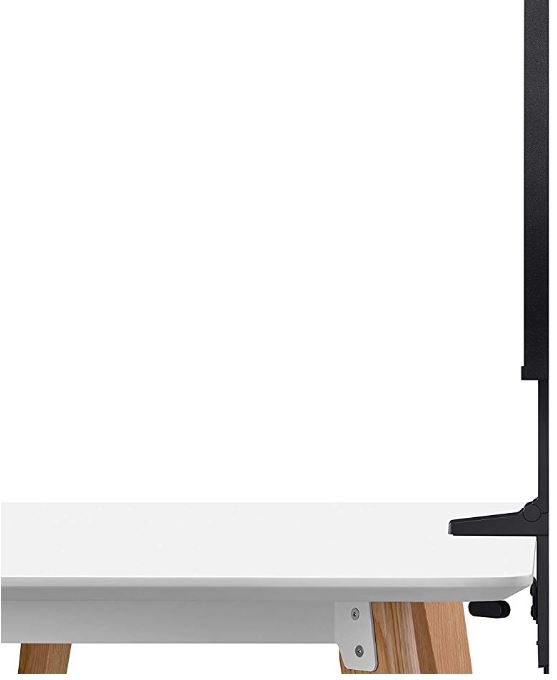 These panels are intended to provide almost endless adjustability. You can push them back against the wall, giving you an undisturbed workspace. When you’re ready to use your screen, you can just pull it forward again. It’s only when fully retracted against the wall that you realize how much space is being saved. 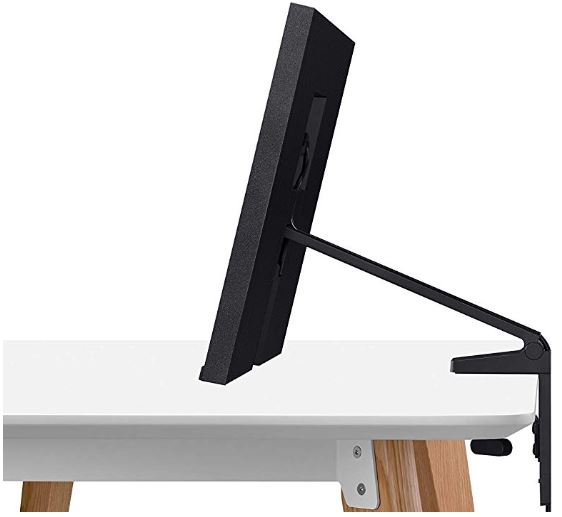 When you compare one of these monitors to a standard panel, like the Samsung SD850, you’ll find that you end up with about 30% more desk space. Though the precise amount of space recovered does depend on the size of your desk.

When you’re thinking about the amount of desk space you’re saving, don’t only think about the surface of the desk. Think about the area that would normally be taken up by the body of the monitor, too. For people who are using smaller workspaces to begin with, or people who like to be able to use the full workspace of their desk, the space difference can be enormous.

Both panels feature zero-level height adjustment, as well. You can raise viewing distances from a peak of 8.4” to the base of your desk. It’s easy to underappreciate height adjustment. But being able to bring down the panel to eye level makes it incredibly adaptable.

A tall person might want the panel up high, and pushed back. But a child using the PC would probably need it pulled all the way down to eye level. Even for one person using their PC all day, being able to adjust the height of your panel means it can accommodate adjustments in your posture or chair. 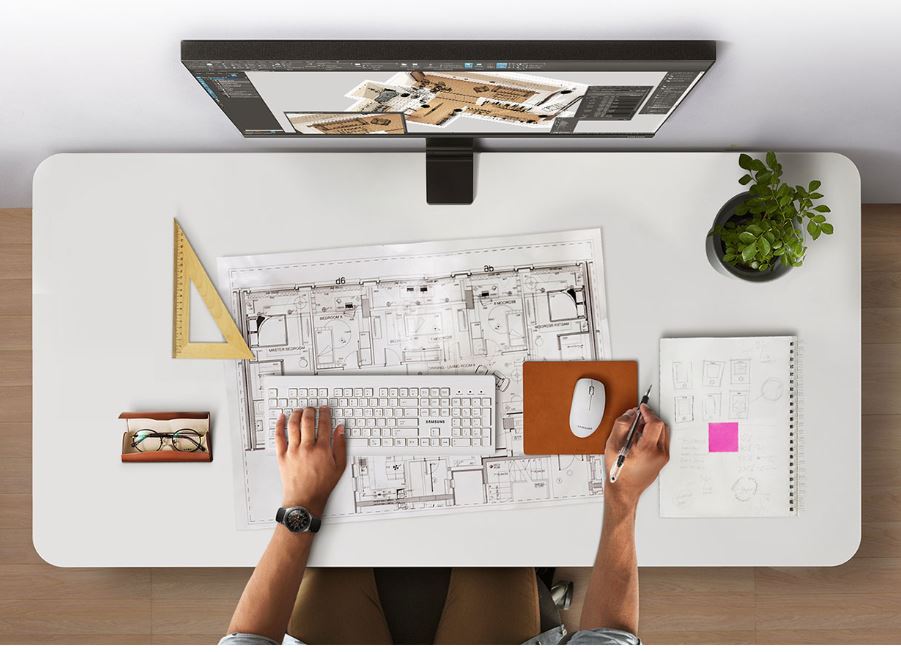 Though the S27R750 and S32R750 are sized differently, and use different resolutions, they actually look similar in many circumstances. For many people, 1440p is really the sweet spot right now. Experientially speaking, using a 1440p monitor is roughly the same as using a 4K monitor.

While people don’t struggle to tell 1080p and 1440p apart from each other, the leap from 1440p to 4K is actually a bit fuzzier. Technically speaking, the 32-inch version is ultimately the better-looking panel because it has more pixels per inch than its 27-inch counterpart. Even though it has to spread them over a larger area, its pixel density is still much greater.

You might think that means the 32” version is better. But it’s not really that simple. Resolution is only important relative to screen size and viewing distance. If you’re sitting within touching distance of your monitor, then you’ll probably be able to appreciate the leap to 4K. Outside of that distance, the rules begin to change.

Both of these panels feature picture-in-picture mode and picture-by-picture mode. Whether you’re trying to create separate workspaces, or separate screens entirely, it’s nice to have options. Samsung also includes some multi-tasking software that lets you break the screen up into as many as half a dozen separate screens. 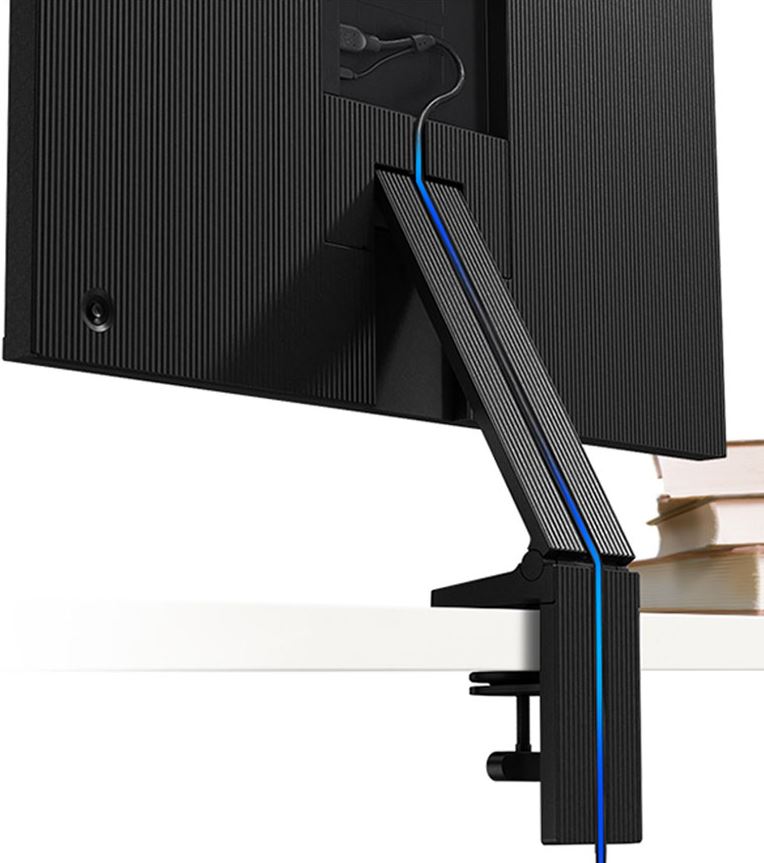 Because these monitors don’t use a traditional desk stand, there is an installation process you’ve got to deal with. Fortunately, it’s really not any more difficult than installing an ordinary monitor stand. At least, provided that you’re not dealing with any unusual installation conditions.

You’ll need to make sure your desk is capable of supporting the clamping force. You probably wouldn’t want to use a wobbly desk, and you might not want to use a tempered glass desk. But provided it’s got the right place to take root, this stand is every bit as functional as any of the best comparable third party stands on the market.

After you’ve got it seated in place, you’ll find the stand operates smoothly. It may also be worth noting the stand can operate without creating unnecessary noise. 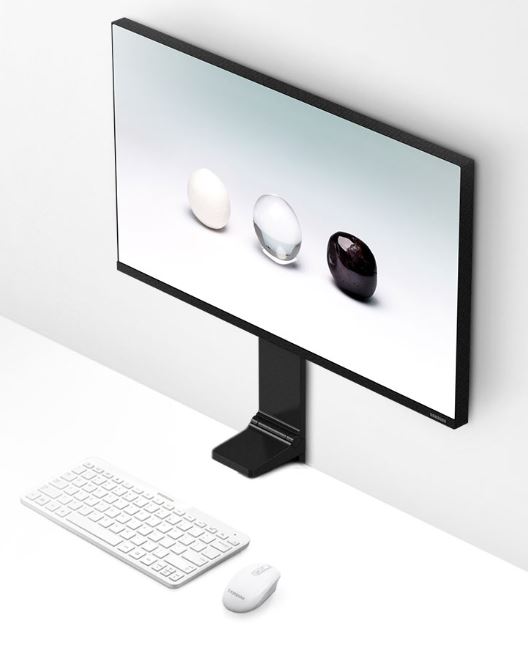 Samsung includes a warranty that will cover you for a couple of years, but monitors very rarely have issues. At least, unless they have issues immediately out of the box, at which point you’re covered by the warranty.

These warranties usually only cover dead pixels if there are more than three or four. Unfortunately, that’s a standard practice used by essentially every brand. Fortunately, Samsung’s quality assurance department does a pretty good job of making sure people don’t encounter that kind of upsetting situation.

There aren’t any speakers on these panels. That’s probably for the best because monitor speakers tend to sound terrible, and few people end up using them anyway. The HDMI port allows you to take care of the rest of your audio concerns. Though some people would have appreciated a 3.5mm audio port on the panel. 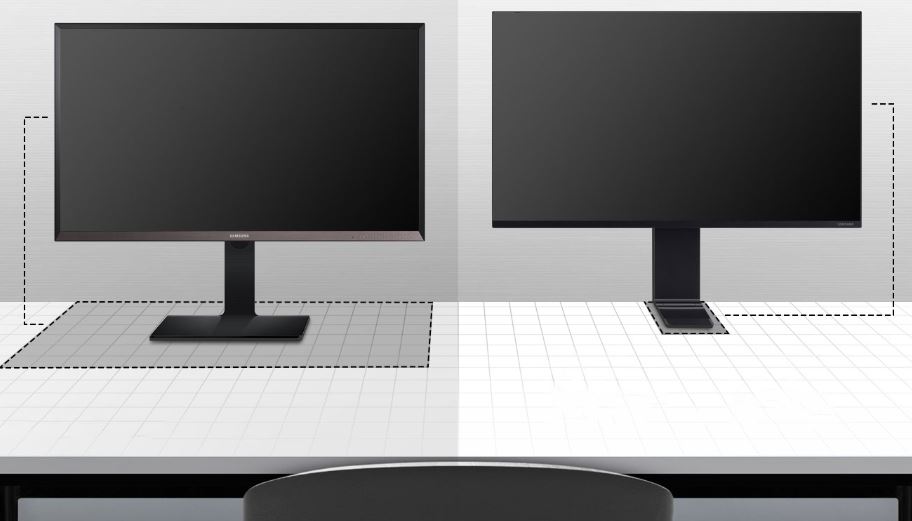 Whether you should select a 27” panel or a 32” panel depends on your own unique circumstances. The S27R750 is about as large as you want to make a 1440p monitor. It looks fantastic from all angles, and it takes advantage of all the same essential features as the 32” version. The S32R750 provides a bit more workspace. It’s more like a true equivalent to having two screens packed into one.

Of course, some people don’t need this kind of adjustability. They might be better served by pursuing high-end features instead, like support for an expanded color gamut. Some people won’t be able to secure the clamp against their desk. But for people who can use adjustability and desk space, either of the Space QHD Monitors could be an excellent workspace companion.