Running a decent dash camera in your vehicle can be pretty handy. There’s a good reason that in some parts of the world, drivers are required to have them by law. Because when accidents happen, it helps to be able to prove who is at fault without relying on the honesty, memory, and best intentions of people. And with the increasing number of smart-driving features you’ll find inside dash cams, they might even be able to help you avoid an incident from even occurring.

Thinkware has about a dozen different lines of dash cameras. Considered in their historical context, during the time of their release, none of these cameras were really awful. But nearly all of them have been fairly highly targeted towards particular kinds of drivers. The X700 Dash Cam is no exception to that long running rule. 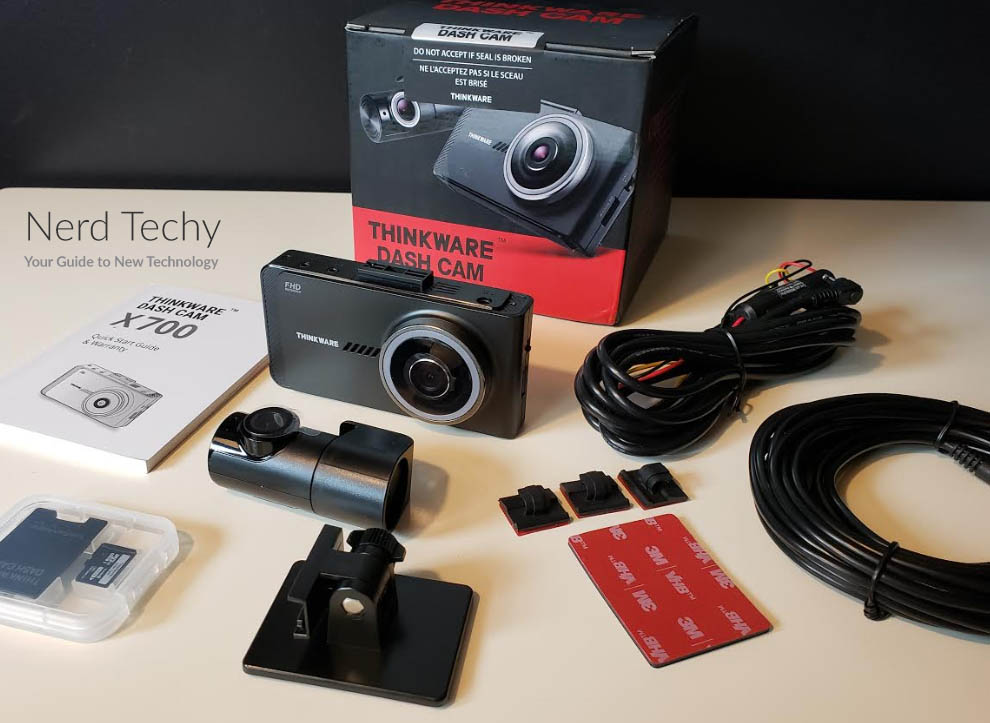 The X700 is a very approachable unit. It allows for expansion possibilities, and it delivers a widen number of detection modes and parking features. Of course, no dash camera can do everything, and here you’ll find a number of common sense limitations. Some of these are almost obvious, like the fact this camera can’t shoot in 4K. Other limits are a little subtler.

The X700 measures about 4 x 2 x 1.1 inches. That’s a tad smaller than a typical smartphone, and the relatively small size of the device makes it great for placing in your windows without obscuring your view of the road. It’s also about the same size as any of the previous Thinkware dash cams.

On the front side near the lens, you’ll find a front-facing speaker. On the backside, you’ll find a pair of status LEDs. And underneath, you’ll find inputs for a GPS, V-In socket, and a DC power port. And on the side, a power button and a memory card port. All in all, that’s a pretty minimalistic design that requires almost no training or experience to become accustomed to using. Basically all of the rest of the controls are packed into the display.

Turning to the display, on the backside you’ll find a 2.7” LCD. It’s actually a touchscreen, and the touchscreen is broken into four primary quadrants. From the home screen, you can select between a live view of your camera, a file list, and configure the settings for your next shots. You can also determine whether or not the camera is presently recording by looking at the top of the screen. There’s even a stop-recording button you can use to instantly stop the camera from recording.

Inside that small chassis you’ll find a fairly robust night vision capacity. Clearly, having good night vision is quite important for a dash camera. Because you want your camera to have viability whether it’s dark outside or not. In this case, you’ll find the image signal processing inside the X700 is pretty nearly ten times as bright as earlier models produced by Thinkware – at least when you’re comparing the parking modes. As a result, your shots enjoy far more visibility at night. 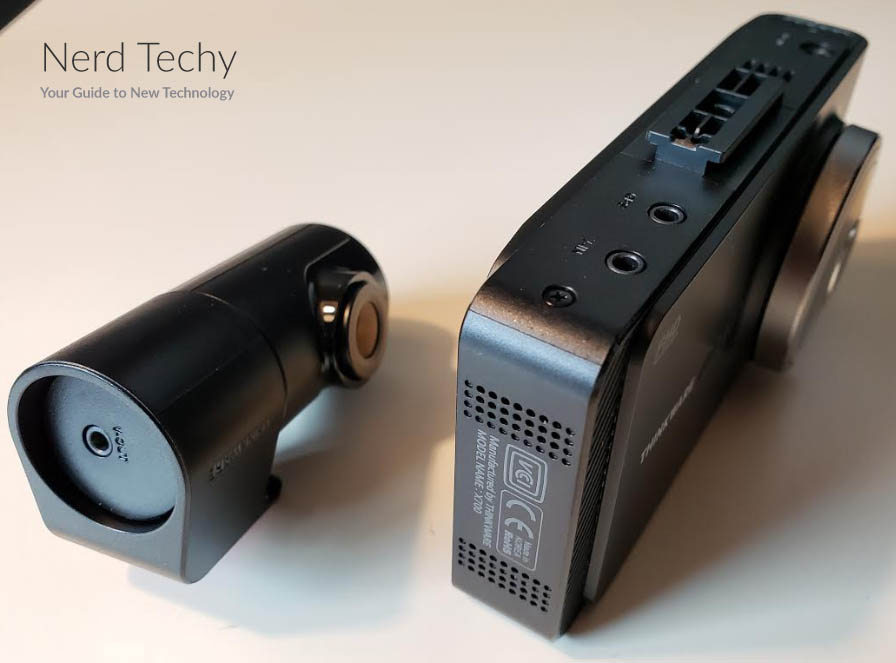 Why does Thinkware call it “super” night vision? Part of the reason is because you’re not relegated to black and white footage, and you don’t end up with green footage either. Night vision is actually pretty close to a true to life presentation, including actual coloration in each frame.

Likewise, integrated thermal protection is something that has been pretty standard inside Thinkware cameras for a while now. The X700 hasn’t redesigned or redeveloped these capacities in any significant way, but they’re still present, and they allow you to keep your camera in hot vehicles without having to worry about them being damaged. Plus, the use of a super capacitor keeps your camera powered for quite a while after you’ve shut down your engine. 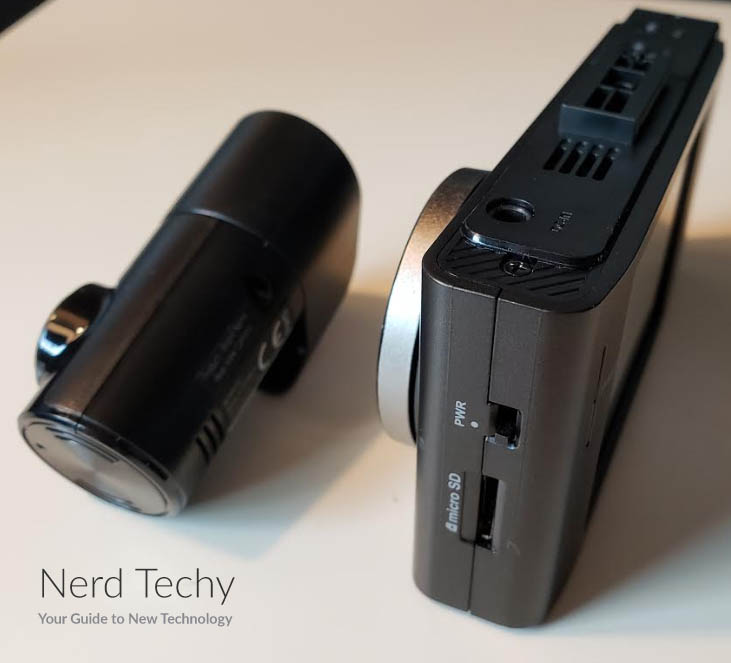 The time lapse feature has strengths and weaknesses. When people think about time lapse cameras, they mostly think about slow motion and fast motion recordings. But in this instance, you’re actually looking at a very different thing. The time lapse behind the X700 was made to help prevent images or clips from being deleted due to insufficient space while undergoing a series of lengthy recordings.

While using parking mode, you’re typically locked into 15 or 30 frames per second. Dropping from 30 to 15 will literally double the amount of space you can squeeze from the X700 Dash Cam because you’re literally recording half of the data. But the Time Lapse Mode used by the X700 is even better. It records at a mere 2 frames per second, which allows you to record about 15-times as much data when compared to the more common 30fps standard. Not ideal for all circumstances, but it’s extremely well suited for a parking mode.

These modes are actually smartly designed, too. For instance, the lane departure warning system only goes off when the vehicles around you are moving at greater than 50 miles per hour. Of course, since the camera can’t make determinations about speed on its own, that’s why you need the optional GPS antenna in order to use these kinds of features. Likewise, the collision and departure warning systems are honed to only alert you when the drivers around you are moving in certain speeds.

For recording modes, you’ll find a pretty standard array of options. There’s a continuous recording mode that can be automatically started the moment you turn over your engine. For this mode, videos get recorded in a one-minute loop, and then automatically recorded over unless you decide to save them. 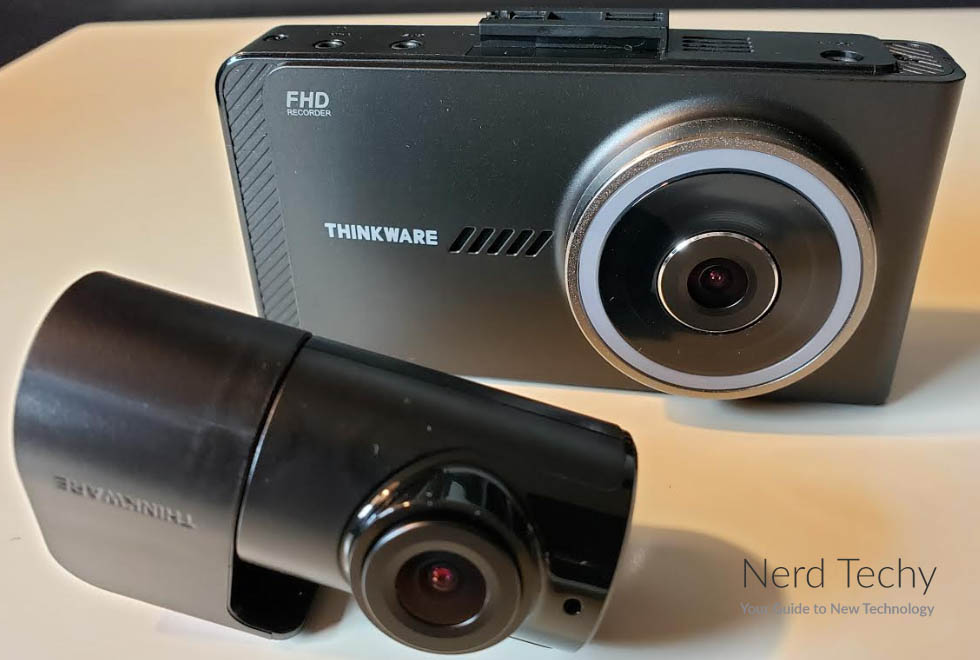 There’s also a manual recording mode that will keep all the footage you collect, and will only come online when you initiate it. Since it requires your initiation, this mode can be used while the vehicle isn’t in motion.

Naturally, there’s an incident recording mode and a parking mode. Both make use of additional sensors to look for impacts or motion, and then record and report that motion to you as instructed. It’s worth noting that like basically all dash cameras, the parking mode will require you to undergo a hardwire installation that’s a little more hands-on.

As is increasingly common among this line of cameras, there’s a road safety warning system. That system includes FCWS, F VDW, LDWS. Safety camera alerts can be used to help ensure you’re not about to back into another driver, or ensure you’re not on route for a collision ahead in the road. And when you’re not in the car, the X700 is able to make use of G-Sensor incident detection. 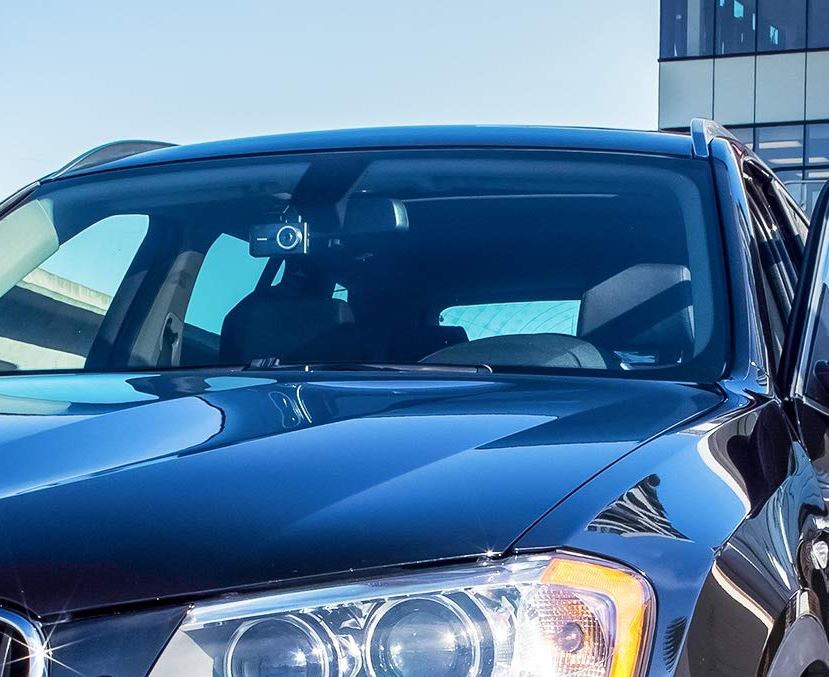 The X700 was constructed with a full 1080p output, for both the front and rear cameras, and the lens produces 142.7° wide angle shots. That’s pretty close to what most people consider panoramic. Running 720p output for the rear camera has been far more common over the past couple of years. But it really only gives you a view of the lane behind you, or perhaps two lanes. For a full view of the area behind you, a 1080p presentation is just better across the board.

In addition to 1080p, shots are captured in wide dynamic range. If you’re not familiar, wide dynamic range is basically the latest advancement to video technology over the past couple of years, which allow for the camera to make a number of adjustments to lighting conditions. The goal is to make your shots far more clear and readable by taking glare and minimizing it, and taking dark conditions and boosting them up.

Color balance is critical for the clarity of an image, so these features aren’t actually frivolous. They actually help make your footage better in almost every sense of the word, both aesthetically and functionally. Though clearly, in plenty of circumstances it’s possible to live without wide dynamic range, it’s a cool thing to have. 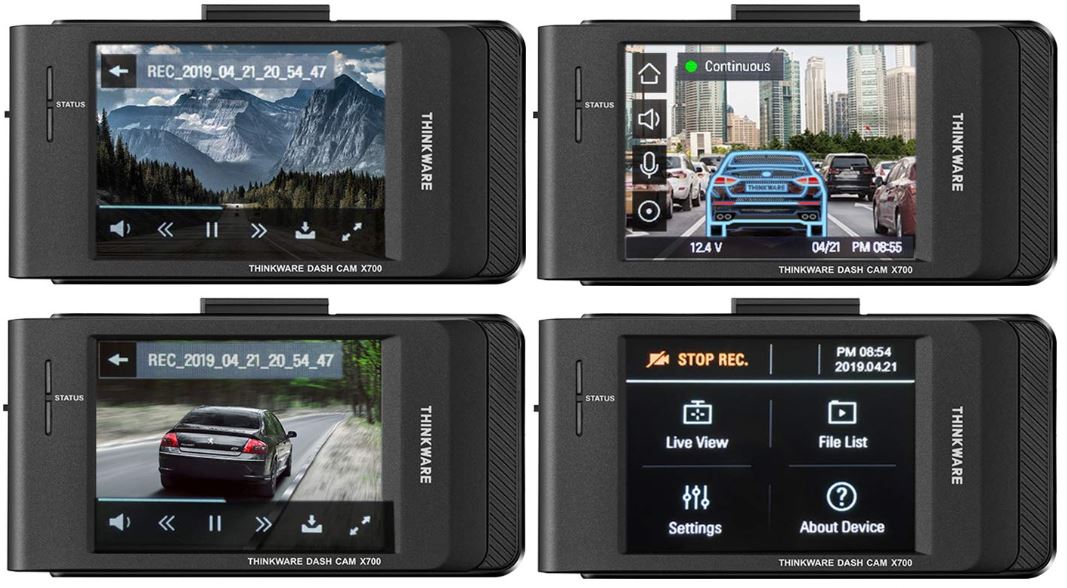 Another thing the lens is capable of doing is automatic exposure. Sooner or later, your camera will be struck by some unexpected bright lights. Maybe a driver behind you pulls up with their high-beams on. Maybe you find yourself ducking into a tunnel, and lighting conditions drastically change, very quickly. Whatever the case, the automatic exposure can even to adjust visual circumstances to keep your shots visible as you move from one area to the next, or as environmental circumstances continue to change on you.

It’s important to keep in mind that many of these modes can be used autonomously. In other words, you don’t need to micromanage your camera or remember to hit some kind of menu button every time you start driving into a tunnel. You just drive as normal, and the camera should adapt to you. Pretty neat.

The X700 is constructed to support the file allocation table system, which means you can use your recordings on essentially any device. That includes Android devices, Windows devices, Apple devices, and so forth.

There’s a PC viewer software which allows you to review or delete your recordings as necessary. The viewing software also lets you batch or organize your files into folders. And since those files are also identified with a timestamp, it’s actually quite easy to work your way through them. Additionally, the X700 includes some adhesive tape for mounting, a warranty card, cigar jack adapter, and an intro-grade SD card to help you get started. 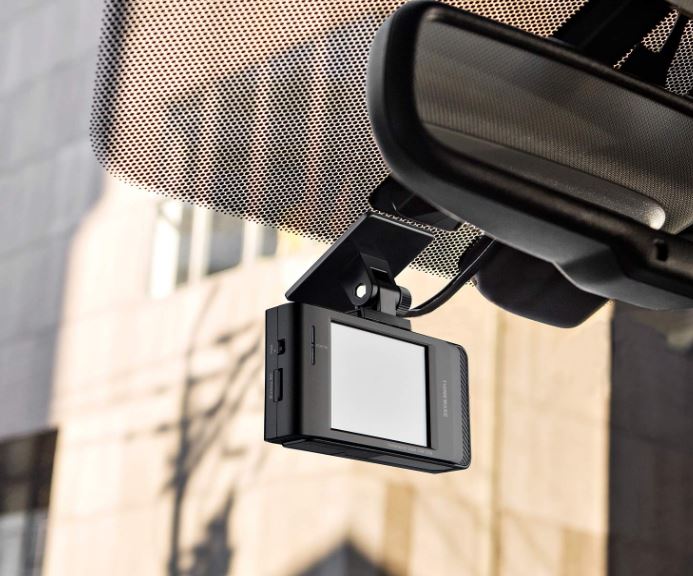 Who Should Choose the Thinkware X700?

This camera has basically all of the big features that people are looking to get from a dash cam. That includes a number of redundant recording modes and driving safety features. It also includes some basic expandability because you can hook-in a GPS or V-In connection to expand your kit a little further.

Admittedly, dollar for dollar, the Thinkware X700 won’t be right for everyone. But for people who are trying to find a happy medium between limited intro-level cameras and excessive top-shelf cameras, the X700 should serve that purpose quite well.