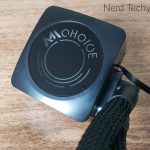 The beautiful thing about a desktop PC is how easy they are to modify and upgrade. With most other types of computer, it’s either difficult or impossible to make an upgrade. With laptop computers, you’re looking at specialized, expensive components that are tough to assemble and disassemble. With Macs, it’s virtually impossible to make any changes to your hardware. And don’t even think about modifying your smartphone or tablet. Point being, a desktop PC is the ideal system for do-it-yourselfers. But it takes a little bit of know-how, which means choosing the right components.

One of the most common changes people make to their computer is a CPU upgrade. With a faster CPU, you can achieve tasks more quickly, run more games, and push your system to its limit. If you’re a power user, you can go even further. Using software like Intel Performance Maximizer, you can run your processor at a higher voltage. This process, known as “overclocking,” can give you a significant speed boost.

However, you have to be careful. Processors are designed to run at a certain voltage, and when you exceed that, they can get hot. When this happens, your stock air cooler might not be sufficiently powerful. Your processor could overheat, which will cause your system to crash in the best case scenario. In the worst case scenario, you could permanently damage your processor, and even the CPU socket. Instead, you’ll likely want to upgrade your system with a water cooler.

We’re about to analyze and review the AMCHOICE Adjustable ARGB-360 CPU Water Cooler. This 360mm cooler is designed for large PCs with plenty of space for expansion. 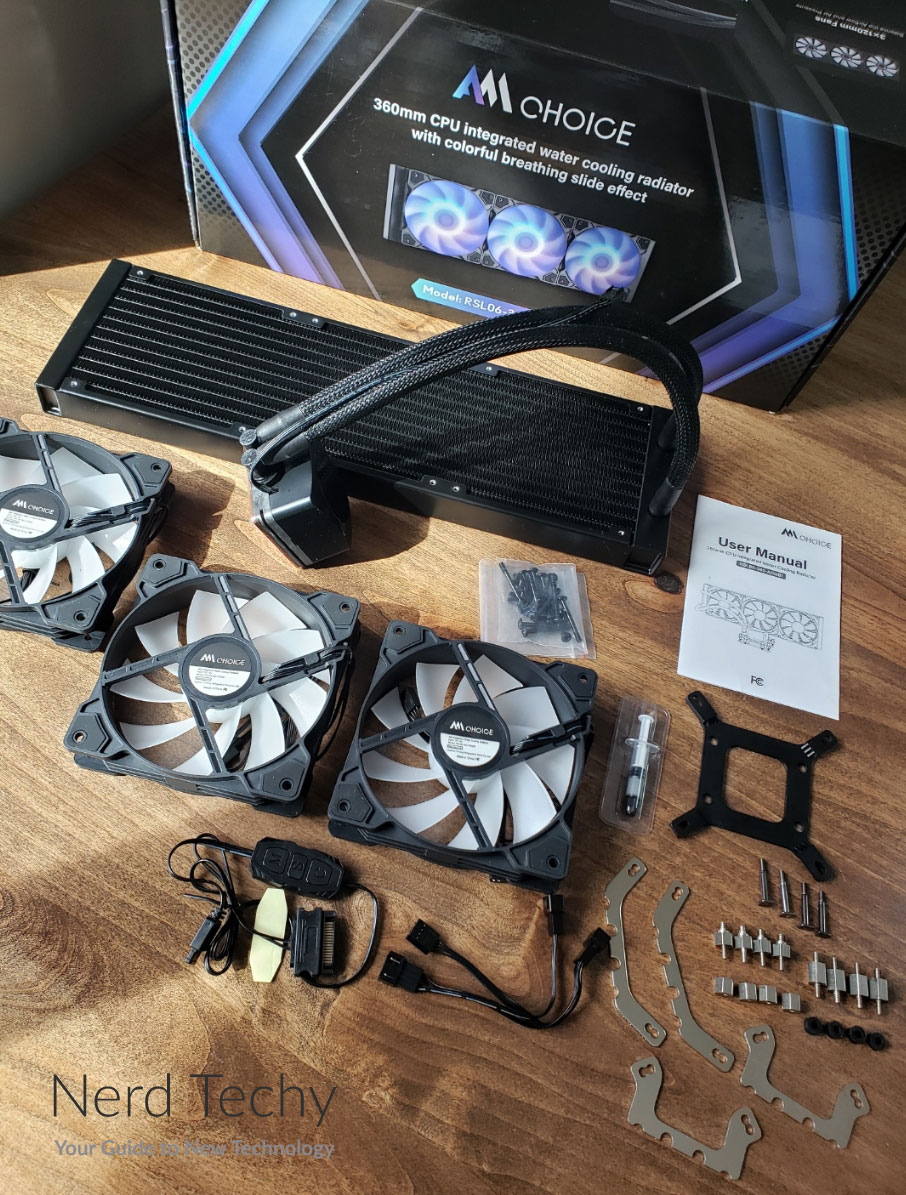 But thanks to the large size, it’s capable of dispersing an impressive amount of heat. Of course, we’ll need to look further than just the basics. We’ll have to dig into the physical design, from the cooling plate to the water tubes. We’ll talk about how it’s installed, and how you can control it. After that, we’ll have a better idea of what we’re dealing with. Let’s get started! 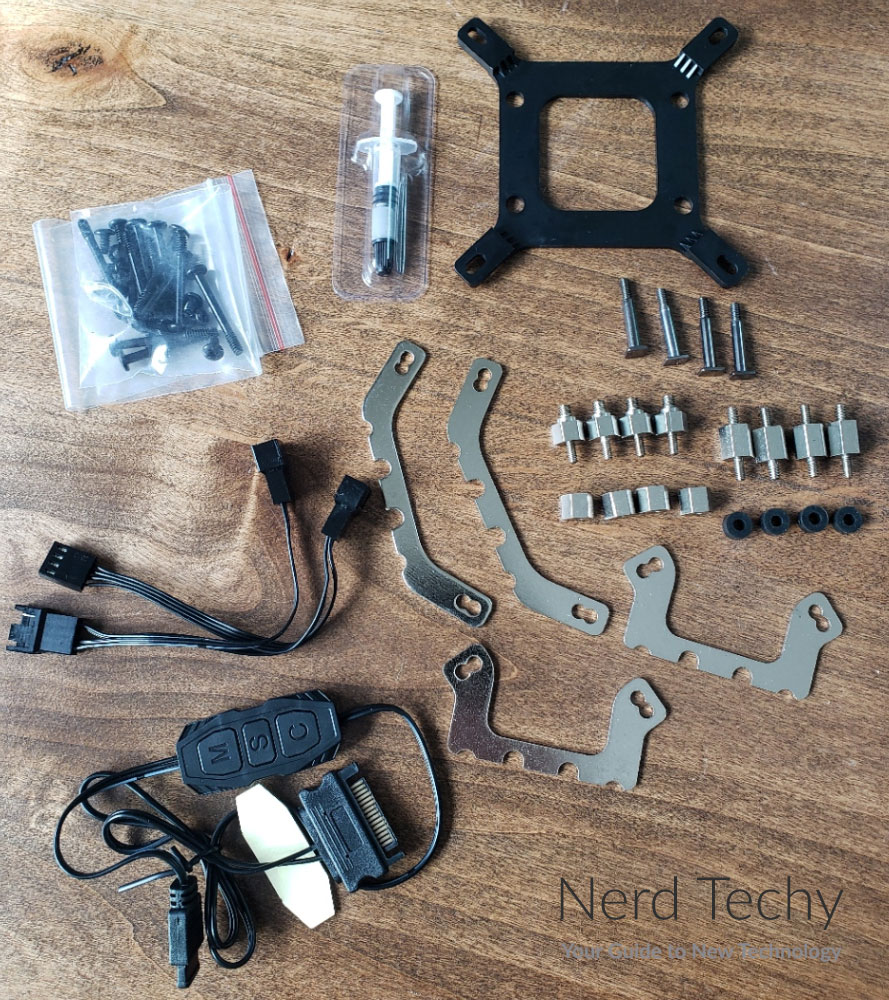 The AMCHOICE Adjustable ARGB-360 CPU Water Cooler consists of two components. The first is the heatsink itself, which is a small cooling block. The second is a fan assembly consisting of three 120mm fans, laid out side by side. Both the heatsink and the fan assembly are connected by high-quality EPDM tubing. These tubes are heat-resistant, very flexible, and double-sealed to prevent leakage. The liquid is already inside the system, so you don’t have to fill any reservoirs. This makes it much easier to install, without the risk of damaging other parts of your system.

(Use code QP8J5GQO for a steep discount when you order from Amazon.) 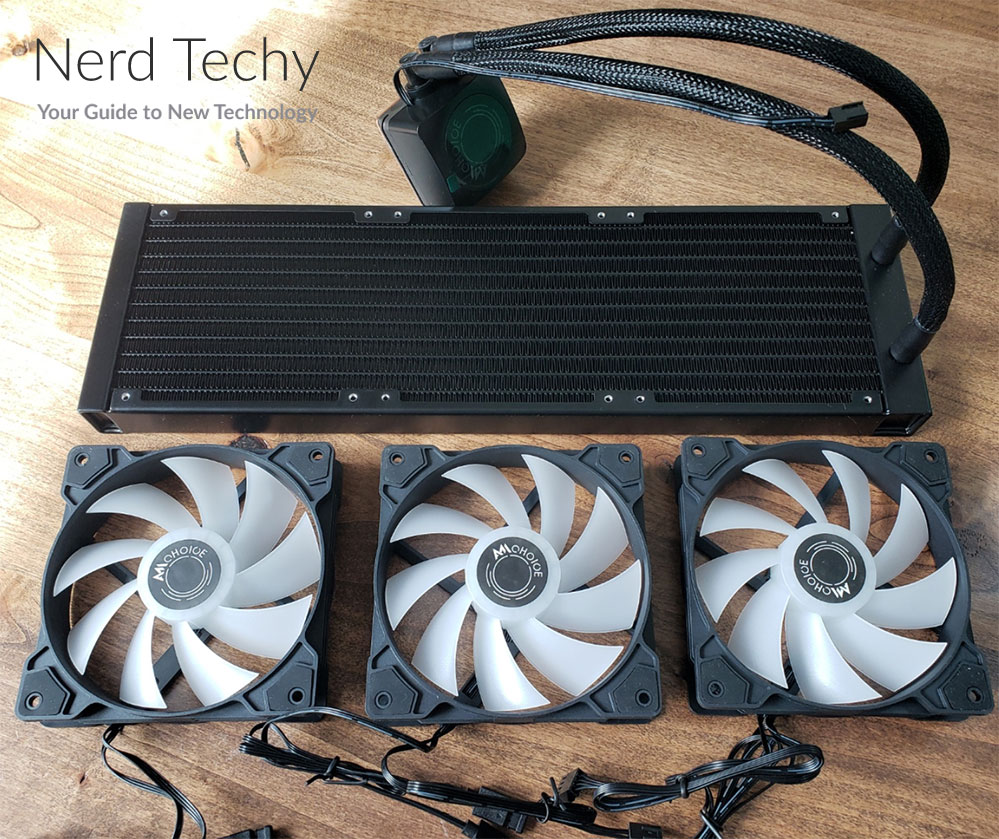 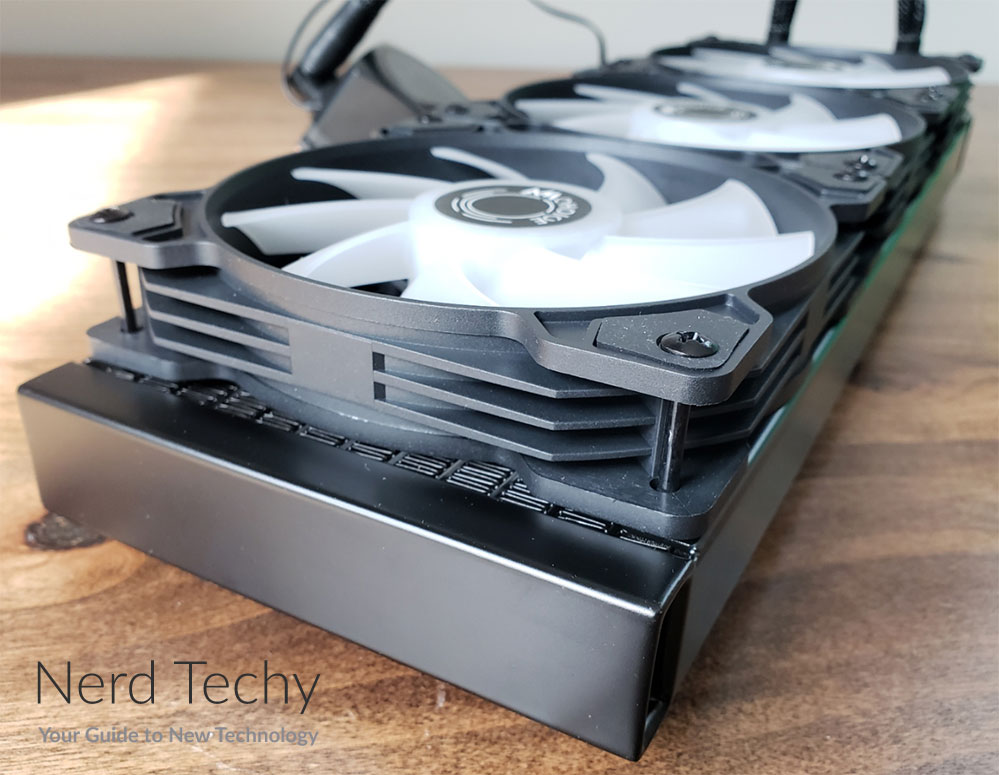 The fans themselves offer excellent performance. Each individual fan can move up to 64 cubic feet of air per minute, which is a significant amount. Between all three, you’re blowing more air than a lot of home air purifiers. This cools the liquid as quickly as possible, ensuring that your processor stays as cool as possible. Better yet, the fans are very quiet. At maximum speed, they produce only 29.7dB of noise. This is loud enough to be audible, but it’s barely louder than a whisper. AMCHOICE does recommend mounting the fans with a gap between them and the side of the case. If they’re touching your case, the vibrations can cause significantly more noise. 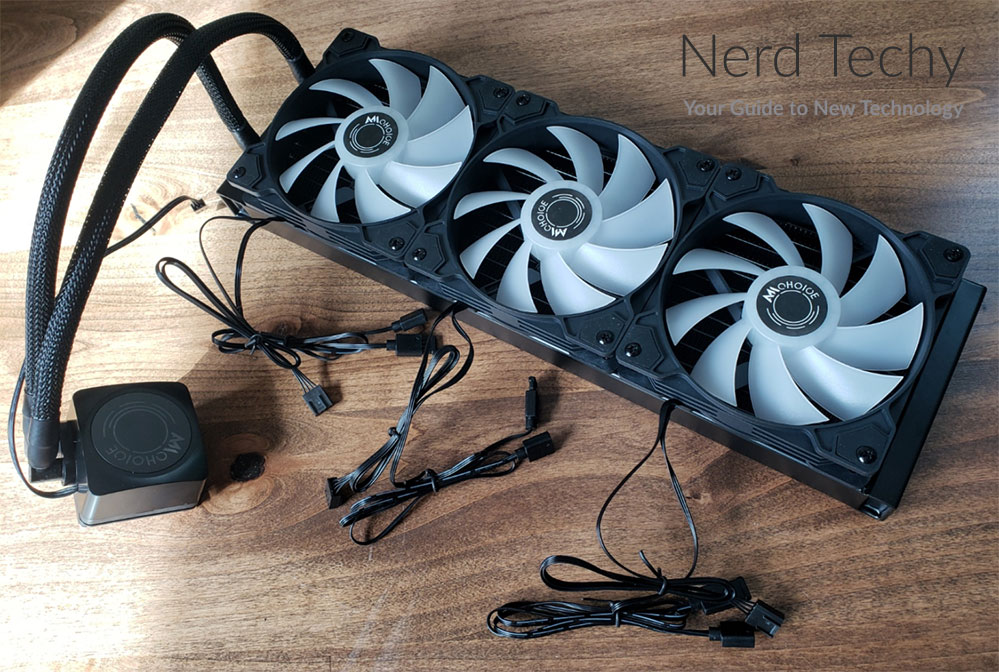 Installing the AMCHOICE CPU cooler is simple and straightforward. All you have to do is attach the heatsink, mount the fans, and hook up the power. The heat sink is very versatile, and supports the majority of modern CPU sockets. On the Intel side, it can mount on the LGA775, 15X, 1366, 2011, 2066, 1200, and 1700 sockets. On the AMD side, it can mount on FM1, FM2, AM2, AM2+, AM3, AM3+, and AM4 sockets. This doesn’t quite make it universal. But it gives you wider compatibility than many comparable coolers. 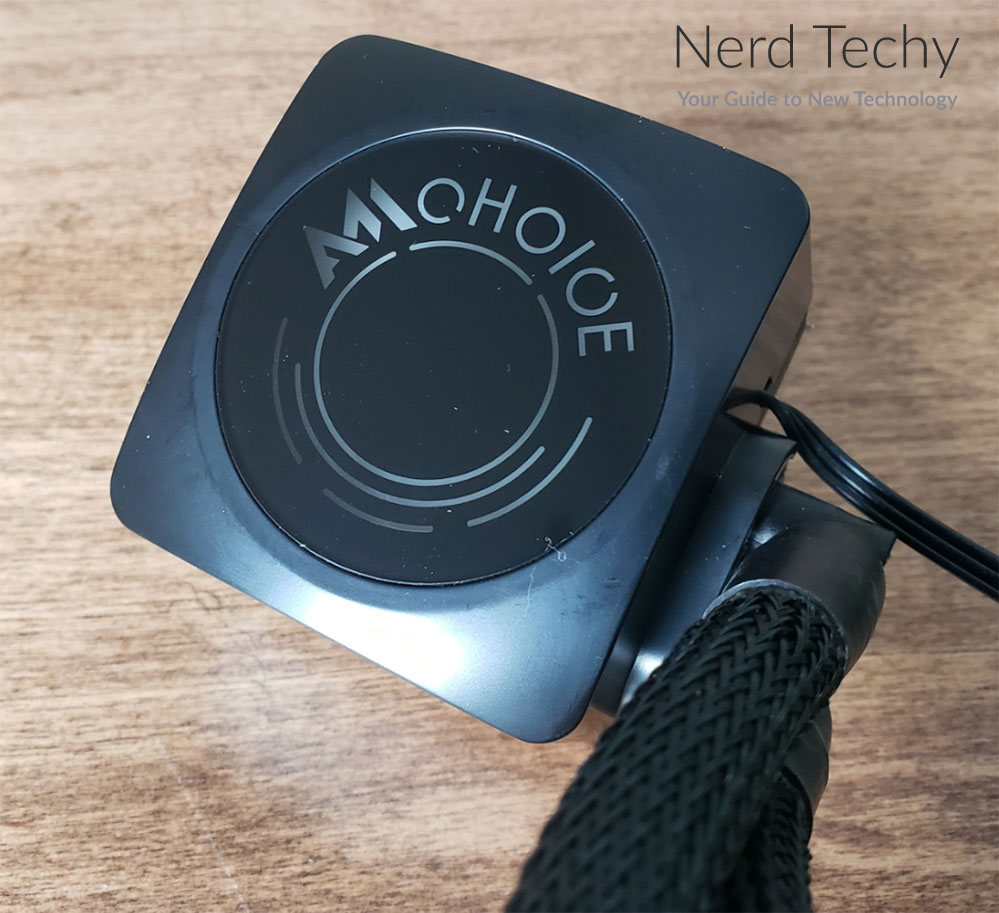 One thing to be aware of is that the heatsink requires 38.5mm of clearance. This isn’t all that much, and it shouldn’t be an issue in most cases. Then again, you might be working in a very compact PC, or one that’s already very crowded inside. Either way, we highly recommend you check your measurements twice before ordering. 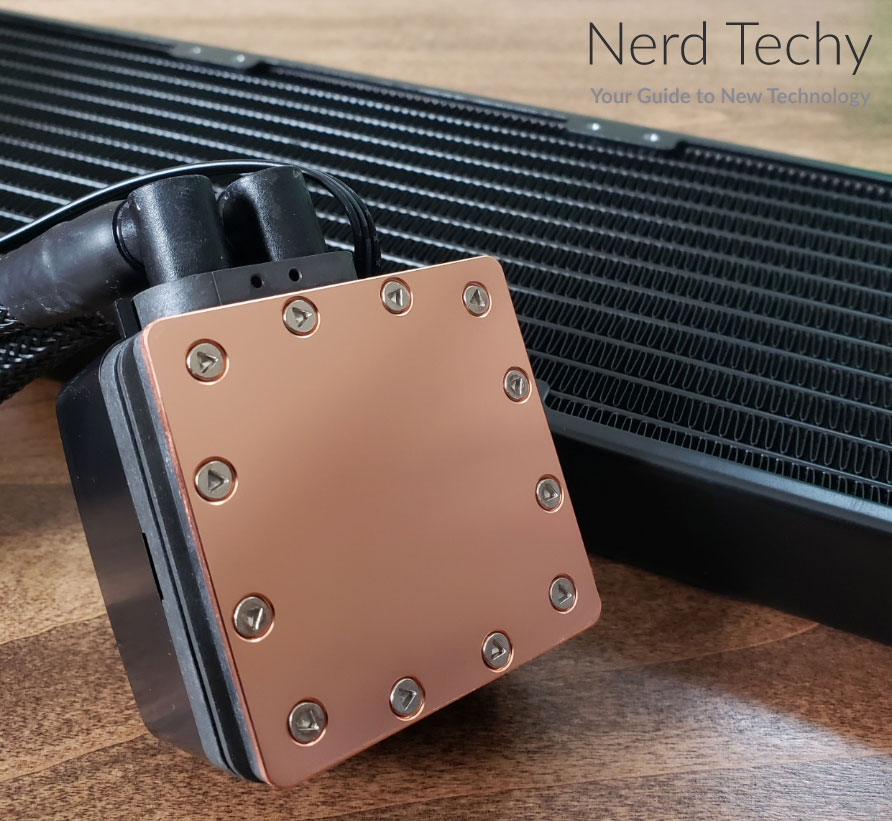 For power, this cooler uses a standard four-pin connection. Once it’s plugged in, it will automatically start working. There’s additional, optional wiring as well for the RGB lighting. The kit includes a wired RGB controller, which can be plugged into a standard 3-pin connection. If you don’t have a 3-pin connection, you can use an adapter to connect it to SATA. Once it’s hooked up, you’ll be able to adjust the lighting any time you like. Unfortunately, there’s no app control, but you can’t have everything. 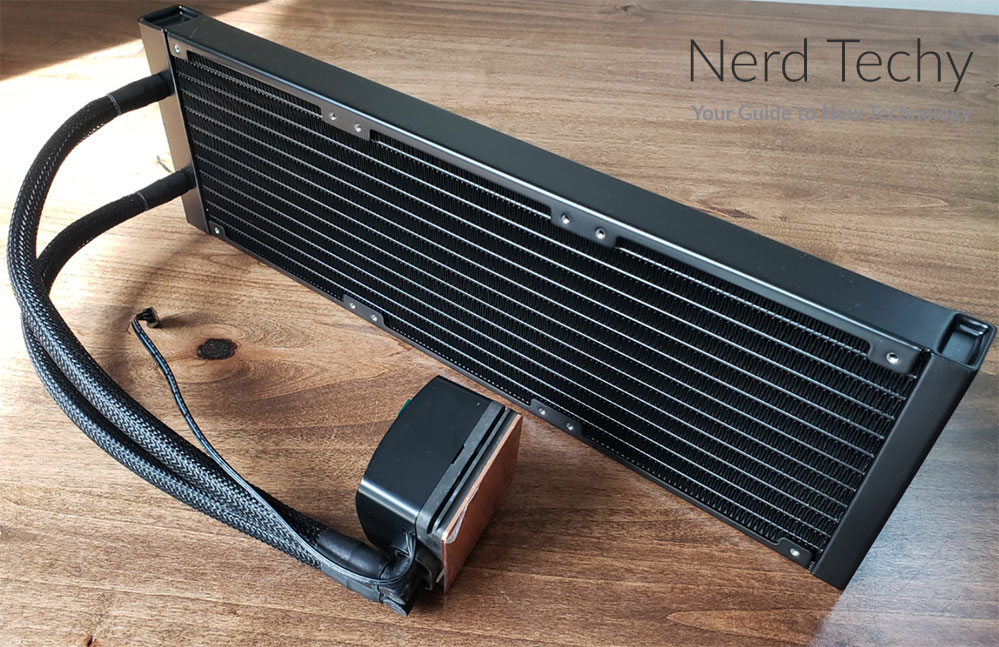 Do I Need a CPU Water Cooler?

A liquid CPU cooler, sometimes known as a water cooler or an all-in-one (AIO) cooler, is a special type of CPU cooler. Instead of using a heatsink and fins, they use water or propylene glycol to cool your system. A liquid cooler has a built-in reservoir, along with fans and a heat sink. Tubes run between everything, and pumps force the liquid through the tubes. When the liquid gets to the heat sink, it absorbs heat. It then flows back out to the fan housing, where fans blow air over the tubes. This cools the liquid in the tubes before it returns to the heat sink, and the cycle repeats. 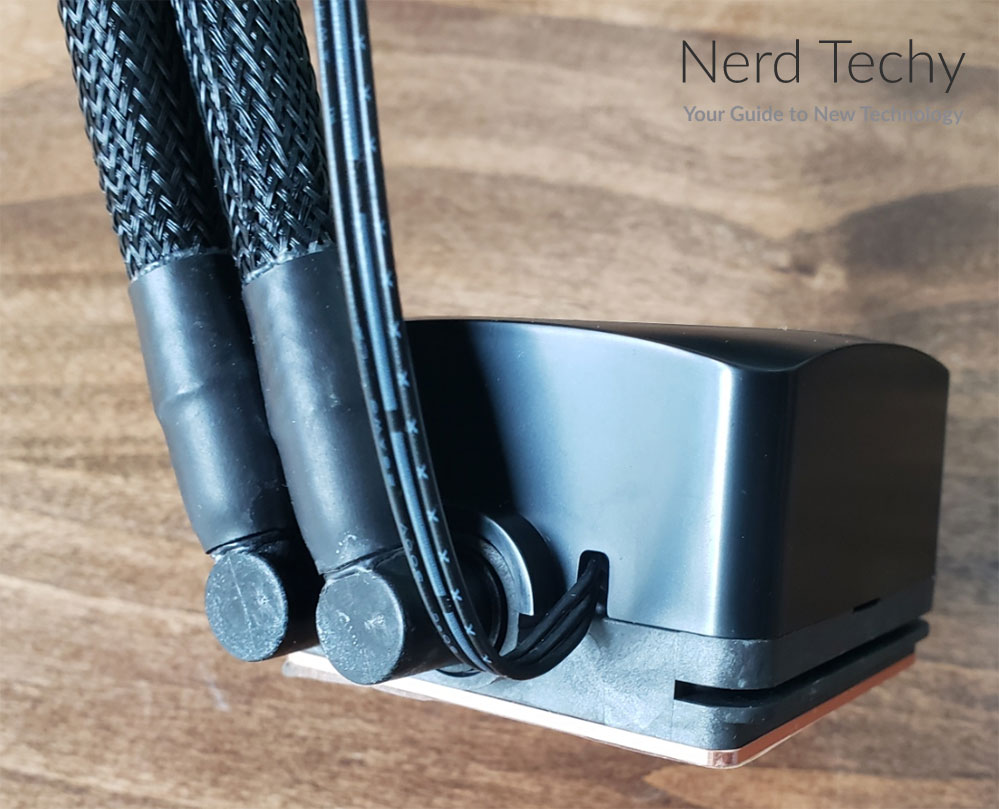 Under most circumstances, liquid coolers are more effective than air coolers. That said, there’s some overlap. You can order high-end air coolers that are more effective than lower-end liquid coolers. This is especially true if the liquid cooler has only a single fan. Even so, those high-end air coolers tend to be big and bulky. Air coolers have a metal base plate, with copper heat pipes that run to a larger heat sink. This heat sink has many metal fins, which increases the surface area for optimal heat dispersal. A fan blows over the fins, continually drawing heat away from your processor. 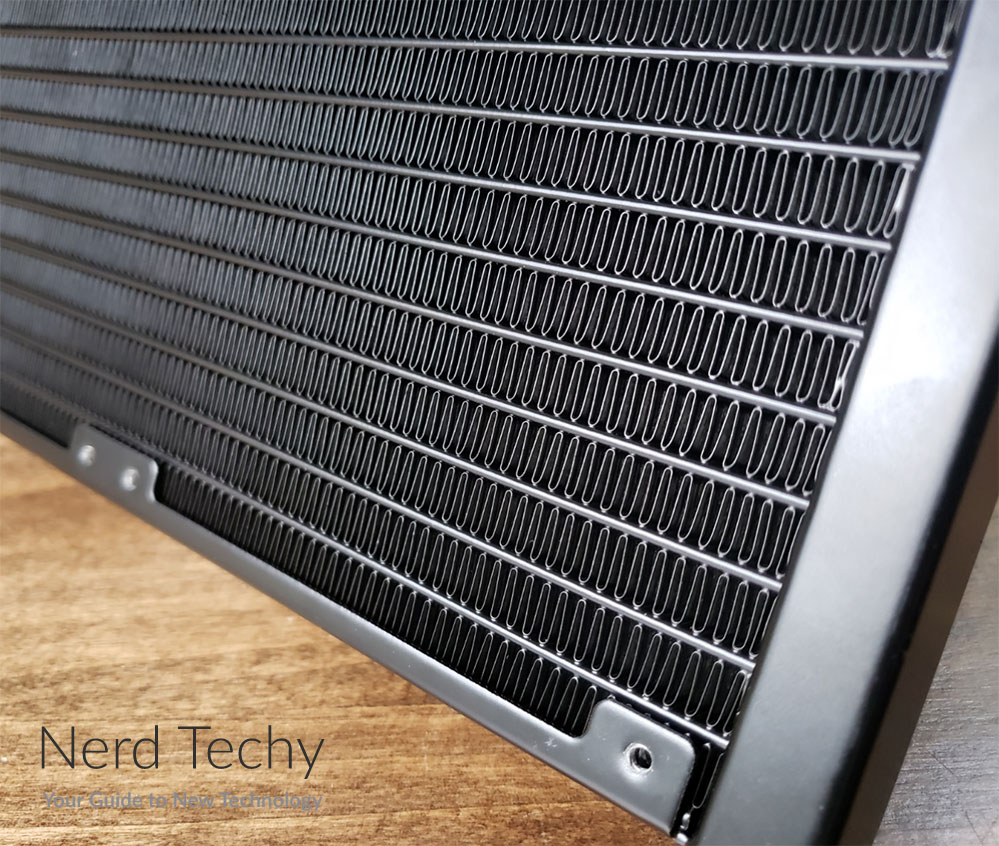 However, the heat pipes themselves are hollow, and rely on air for heat transfer. Water is much more efficient than air at transferring heat, so you get more efficient cooling. Think of reaching into a 400-degree oven to retrieve a roast. That air is literally hot enough to cook meat. But you can stick your arm into the oven for a few seconds, and you’ll only feel a little warm. Now think of reaching into a pot of boiling water. Even though the pot is nowhere near as hot as the 400-degree oven, you’ll be instantly scalded.

But do you actually need a CPU water cooler? There’s a good argument to be made that a liquid cooler is unnecessary for anyone who’s not overclocking. Your stock air cooling system should be more than enough under most circumstances. Then again, there are still some good reasons to consider using a liquid cooler.

For one thing, higher temperatures reduce your CPU’s lifespan. This is true even when your processor is well within its rated temperature range. No, it’s not going to cook itself right away. But over time, heat puts wear and tear on your processor, and it wears out faster. An AIO cooler will keep your CPU at a lower temperature, extending its life. You can also get better performance. Most CPUs will automatically throttle down when they run at a high temperature for too long. With a liquid cooler, you’ll experience less throttling, which means better gaming performance.

There are also some more minor factors in favor of a liquid cooler. For one thing, they tend to run a lot quieter than air coolers. For another thing, the fans themselves often come with RGB lighting. This adds nothing to their performance, but it does make for a slick-looking PC.

That said, there are also some downsides to be aware of. To begin with, air coolers are pretty straightforward, and the only electrical part is the fan. The cooling block rarely, if ever needs maintenance, and the fan is easy to replace if it fails. On the other hand, liquid coolers have multiple fans and pumps. If any one of these parts fails, you won’t be able to replace it separately. Instead, you’ll have to replace the entire cooler. There’s also a small risk that the coolant may leak, but modern water coolers are designed to prevent this.

The other issue is price. Air coolers are generally affordable, and rarely cost more than a trip to the movies. Liquid coolers, on the other hand, are more expensive. Even a low-end liquid cooler will be more expensive than all but the highest-priced air coolers. And if you want to use a higher-end liquid cooler, you’ll pay considerably more. But just like any other PC component, you get what you pay for. A good quality liquid cooler can extend your CPU’s life by years, and allow for extreme overclocking. That’s something you just won’t get from most air coolers. 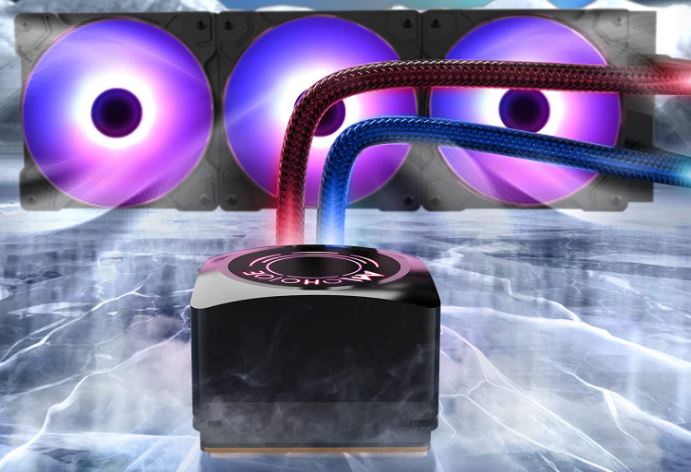 The AMCHOICE Adjustable ARGB-360 CPU Water Cooler is one of the better liquid coolers on today’s market. (Use code QP8J5GQO for a steep discount when you order from Amazon.) It’s a bit large, so it’s not suitable for all cases or builds. But with this size comes an impressive amount of cooling power. Installation is simple and straightforward, and should only take a few minutes. And with its attractive LED lighting, it’s a great addition to any gaming rig.