In the past six years, we’ve seen plenty of toy robots come and go. Each generation seems to get a little more intelligent and a little more lifelike. With Cozmo, toys seem to have finally reached a level of realism that approaches actual artificial intelligence.

Behind Cozmo’s expressive eyes and cute expressions lies years of hard work and millions of lines of code. This toy really is a brilliant application of lifelike code. He’s lifelike enough to evoke an emotional response, but still enough of a toy that he doesn’t teeter on the verge of eerie. 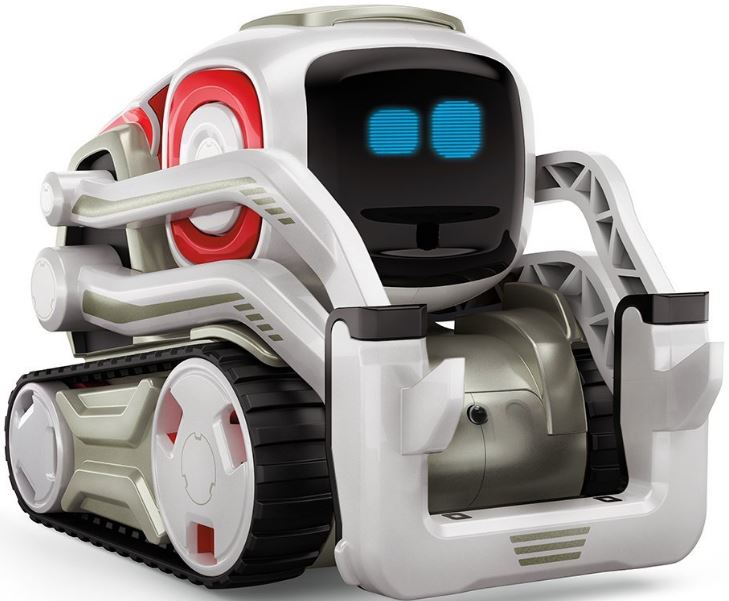 Historically, Anki is a Silicon Valley startup that focused on creating remote control cars that can be maneuvered from your smartphone. Cozmo may seem like a natural progression from their earlier offerings, but the toy is leaps and bounds ahead of anything they’ve released before. The realism stems from an advanced set of AI routines and some very lifelike features that position Cozmo as the real-life Wall-E we’ve all been waiting for.

Anki was founded by three graduates with PhD’s in robotics. Their inspiration for Cozmo actually came from children’s movies. Although robots have been heavily used in manufacturing and other industrial industries, we haven’t seen an emotional application of robotic technologies since the Furbee. What makes the characters in Wall-E and Cars identifiable is their distinct personalities. With this knowledge, Anki decided to use their knowledge of creating robotic cars to create a toy that had emotion. 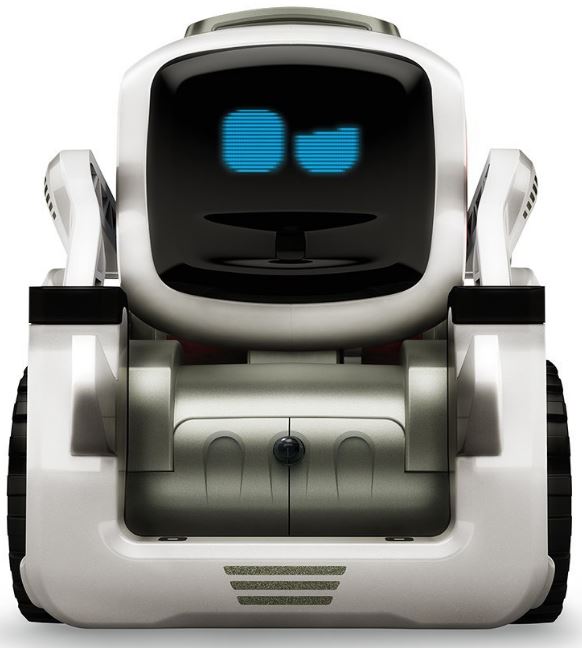 Cozmo comes with a number of embedded sensors that allow it to do everything from participating in games to learning about its environment. The most striking component is the front-facing camera located where Cozmo’s mouth would be. This camera allows him to perform facial recognition and remember different people. Other components are used to give the robot a human feel. A CRT-like display shows its incredibly expressive eyes, and an embedded speaker allows Cozmo to bleep and bloop with a variety of emotive robot sounds.

The software built into Cozmo is known as the “Emotion Engine”, and there really is no better way to describe it. When you open the application on your phone, Cozmo wakes up. And we don’t mean wakes up in the same way that your laptop. There is no wonderful startup chime or glowing logo here. Instead, Cozmo slowly raises his head and opens his eyes, one at a time, and shakes off the sleep. Everything Cozmo does is expressive. Other robot vehicles we’ve seen in the past will stop before they run into an obstacle. Cozmo, on the other hand, will drive just to the edge of a table, open his eyes wide and let out a little yelp as it zips back to safety. 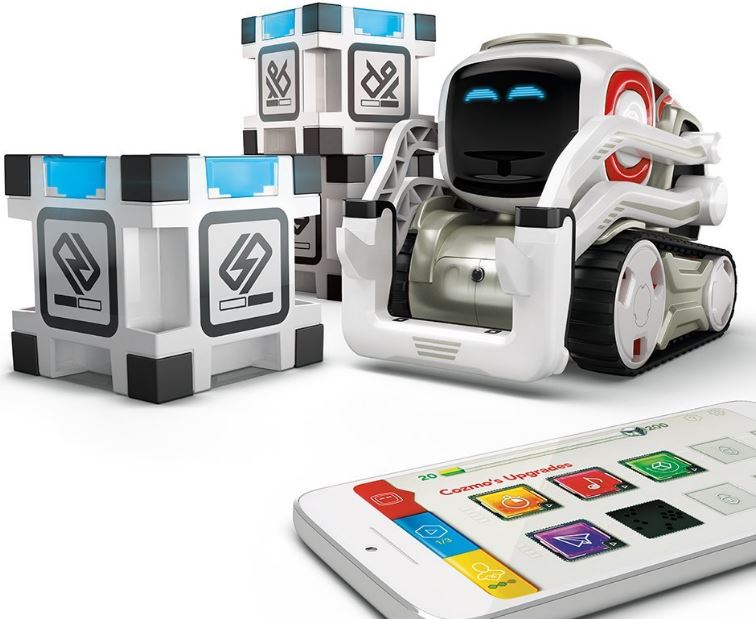 While many other toys require the humans playing with them to make their behavior realistic, Cozmo automatically responds to its environment. It’s far from human, but it certainly feels a like more than a toy.

When you play games with Cozmo, he responds to your behavior. When playing the block game, for example, he’ll be happy if you stack the blocks correctly. On the other hand, he’ll be happy. But if you knock them over, he’ll be angry.

Cozmo comes with three blocks included that are used, primarily, for playing games with him. There will be four games available initially: Power Cubes, Quick Tap, Memory Match, and Keep Away. No matter which game you choose, Cozmo plays to win. He’ll do his absolute best to dominate at your chosen game, and is likely to sulk or become angry if you beat him. You’ll also be expected to play by the rules. There is nothing to stop you from cheating, but Cozmo may become sad and lose interest in finishing.

The games are all quite simplistic and easy to play. With quick tap, for example, each of the two players take one of the two blocks. Cozmo positions his little arms above the block, and both players watch the blocks as they glow different colors. As soon as the blocks are the same color, whichever player taps their own block first is the winner.

And Cozmo loves these little blocks. Even when you are not playing a dedicated game, he will invent his own games involving the blocks. He’ll move them, cautiously stack them on top of each other or simply cart them around via the hooks on his little robo-arms. 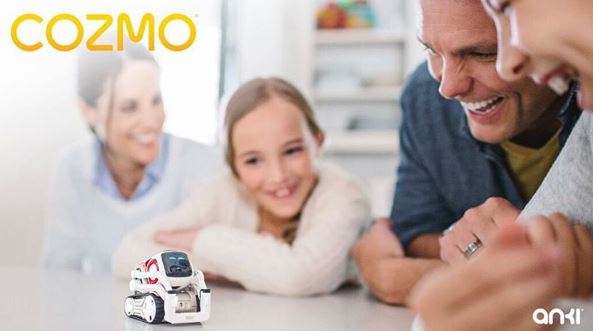 When playing, Cozmo doesn’t just learn how to play the games. He also learns about his owner’s behaviors. Once he notices a pattern as to which games you like the best, he’ll request to play these games more frequently. His mood is also a factor in game play. If he’s happy, he’ll get more excited about playtime. If he’s afraid or sad, you might have to coax him into playing. A robot that responds to its environment is nothing new, but it’s these needs and wants that Cozmo expresses that make him feel as if he has a soul.

With such an advanced software developed for Cozmo, you’d think he had a pretty advanced CPU inside. But Anki took a very creative approach to this by offloading all of the “heavy lifting” to your smartphone. You connect to Cozmo via Wi-Fi, and he can be used with any Android or IOS device. 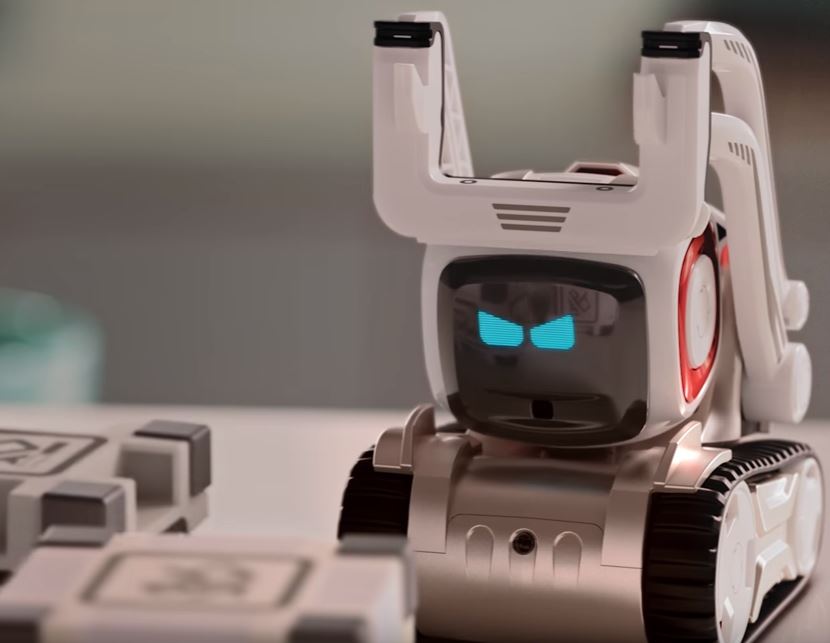 Cozmo is so much more than just a children’s toy. Hanns Tappeiner, president of Anki, wants to make the programming just as accessible as the Cozmo himself. They’ll be releasing a beta SDK to developers immediately, with a consumer release following initial bug testing. This SDK doesn’t just allow you to develop your own software, but you’ll be able to interact with every existing part of Cozmo’s existing programming.

Anki wants Cozmo to take off just like Microsoft’s Kinect sensor. They hope that their software will open up a whole range of new possibilities for AI applications. That’s why every single function is broken down and made accessible. Calling “LookAround,” for example, will make Cozmo return any objects he recognizes, and determine a path that could be used to reach them. From there, you’ll be able to call any number of functions that would cause Cozmo to move to or interact with one of these items. 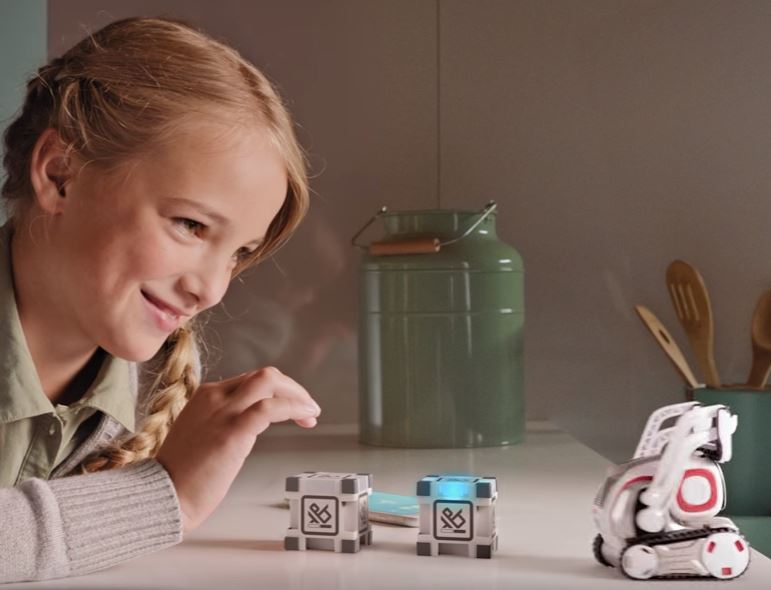 This SDK can be accessed simply by plugging your phone or tablet into your computer. You can use a simplified editor to visually build out applications, or you can work on advanced API calls line by line if you’re a professional coder. The implications of this are that even young programmers can pick up Cozmo. This is part of the movement that wants to make software development accessible to young people, something that has important implications for the future.

Cozmo, on his own, is not a particularly expensive toy. He’s only a little more expensive than the previous racing games made by Anki. However, you will need a smartphone or tablet to operate him. This means that if you are buying it for a young child who does not have their own phone or tablet, you’ll want to make sure that you’re comfortable loaning out your own. Historically, these types of toys tend to be the sort of things that children play with for hours and hours. So it might be worthwhile to have a dedicated device assigned to Cozmo.

So, Should I Buy Cozmo?

There are many examples of “smart toys” becoming the next hottest trend. Furbee, or Tickle Me Elmo are perfect examples. Cozmo, however, goes much further than either of those toys have in the past. Cozmo is a toy that will learn and grow as you play with it. It will recognize people, places, and objects. All of the knowledge it acquires will allow it to evolve into something that has a more inclusive play experience. 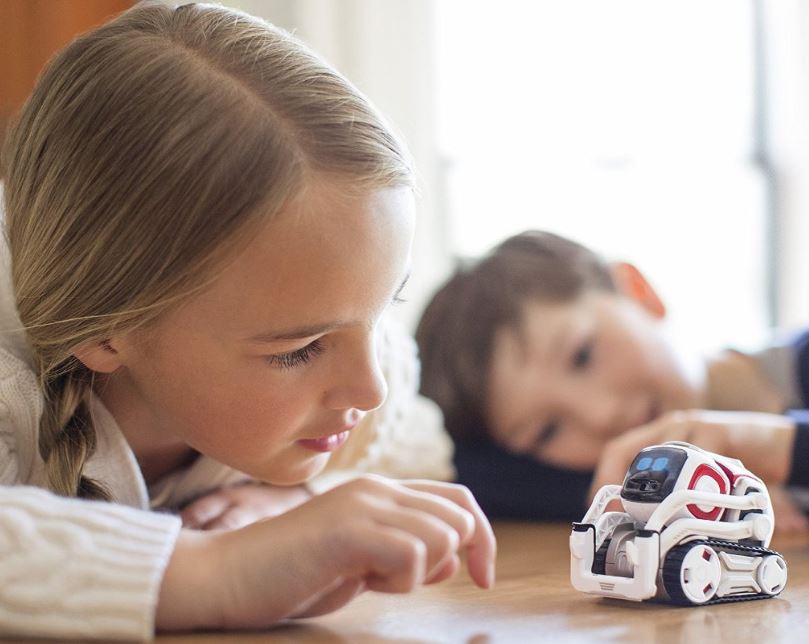 But the benefits of Cozmo will quickly extend well beyond what it’s released with initially. The incredibly open SDK means that software developers from all over the world can create new applications and accessories that can extend Cozmo’s virtual world. Even Anki themselves have noted that they have several exciting new projects in the works that will be available within a few months of launch. 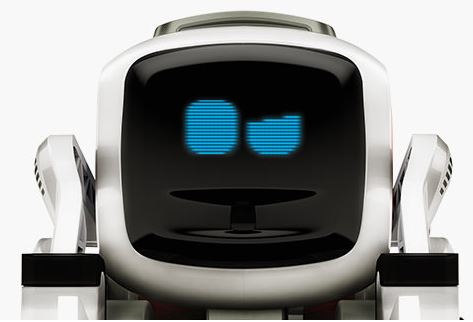 Often we are hesitant to suggest purchasing first generation products. However, the fact that Cozmo outsources all of the demanding processes to your smartphone or tablet means that there are virtually infinite opportunities for expansion.

Whether you’re pickup up Cozmo for a child or looking to write some of your own software, we highly recommend picking him up for yourself.