Ps4 or Xbox? No matter where you ask this question, you’re sure to get conflicting responses. As much as the console wars have the gaming community split down the middle, there’s another debate which tends to be a little more one sided. PC gamers feel that the platform offers a lot more flexibility and power than the consoles. When talking about first person shooters, they have a bit of a point.

First person shooters require lightening quick responses, impeccable accuracy, and a near instant ability to switch tasks. When it comes to console gaming, the game pads just simply cannot compare to the flexibility of a keyboard. Analog sticks are vastly inferior to mice, and controllers are just a little more awkward than a keyboard. For many years, PC gaming was the clear cut choice for FPS enthusiasts.

On November 15th, all of that is going to change. Hori, a company generally known for its fighting game controllers, will be releasing the Tactical Assault Commander Pro or TAC Pro for short. This game combines everything that is great about a console with the control power of a PC. This officially licensed controller will work on both PS3 and PS4, and promises to take your game to a whole new level. Can it live up to the hype? Let’s take a look. 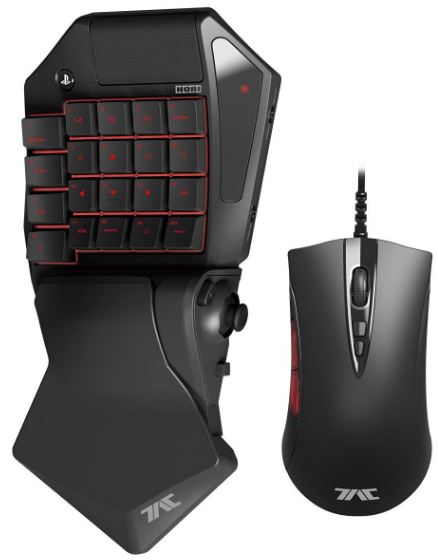 There are two primary components to the TAC Pro. You’ve got the mouse, which at first glance looks like a pretty standard PC mouse. The keyboard, on the other hand, looks way different than anything you’ve ever seen before. You’ve got a bit of a palm rest at the bottom, with a 4 x 5 array of buttons above it. You’ve got 16 main buttons in the center, with a larger modifier key at the end of each row. Above the keypad you’ve got the touchpad that you’d expect with a dual shock compatible controller, and a little analog stick tucked away into the side. 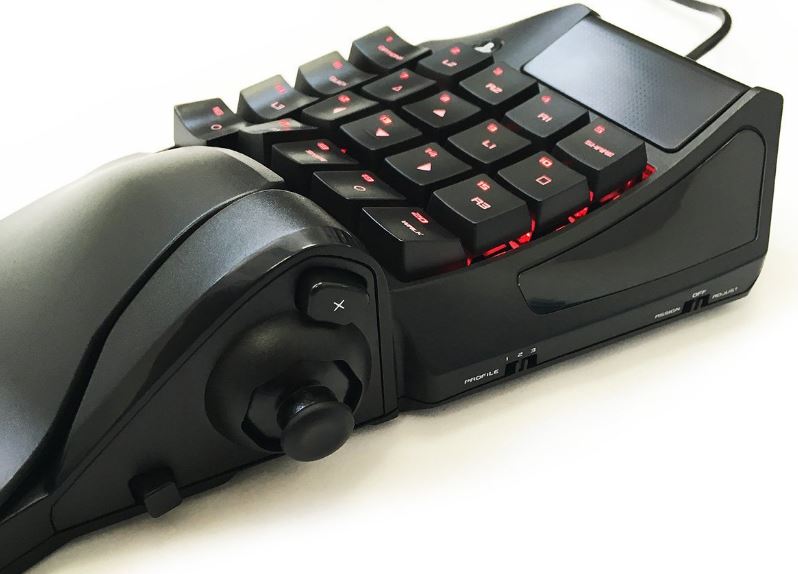 This controller is made for gamers, and the design reflects that. The entire design just bleeds edginess. The controller has a smoothed plastic finish, but it’s well accented with sharp lines and piercing red LED highlights. In some ways, the design ins actually pretty subtle. All of the PC-like elements are highlighted, while the console elements are blended into the exterior.
Ergonomics were clearly a priority when designing the TAC Pro. The keyboard buttons are easy to press, and are just ever so slightly curved to match with the natural curve of your hand. The palm rest is adjustable, making it a suitable controller whether you have large or small hands.

At first glance, the mouse looks pretty basic. It’s designed similarly to many of the freebie mice that come along with economy computers. When you look under the hood, you’ll see an entirely different story. You’ll find a 3200 DPI optical sensor. One of the most precise ones available on the market. Compared to other mice on the market, 800 is considered typical. Gaming mice typically come in around 1800 dpi, with only the highest end mice offering 3200 dpi. What this means is that your mouse will be ultra-responsive. Even your most subtle movement will be recorded, facilitating the ability to destroy your enemies with your superior aim and responsiveness. 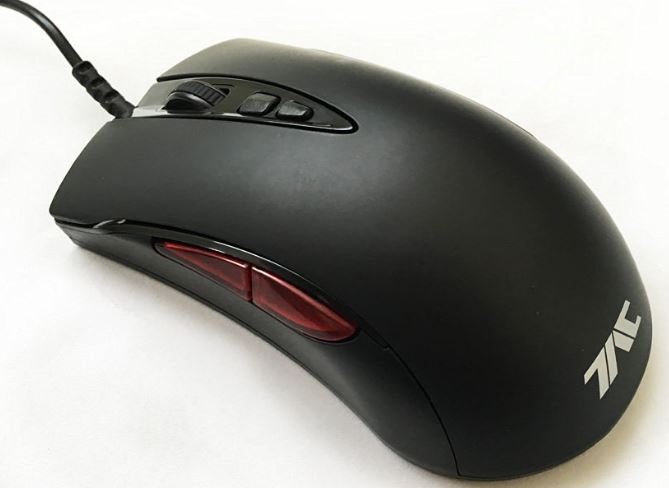 The one complaint that people have about high DPI mice is that even small movements can result in relatively large responses from the game. Hori has addressed this problem by including a “snipe button.” While the button is held down, the mouse sensitivity is cut in half. This means that when you’re ready for a precision shot, you can just tap a single button and more accurately aim where you would like. Once you let go of the button, it’s back to the same snappy response times that will allow you seek out enemies from every corner of the map.

For serious gamers, mouse selection is a pretty personal choice. If for some reason you aren’t happy with the one that’s included with the TAC Pro, you can swap it out for any HID-compliant USB mouse (virtually all of them).

You know how we feel about mechanical keyboards. The rubber dome actuated switches used in most keyboard today are borderline unusable. They feel squishy, are unresponsive and accidentally triggering them is just way too easy. With the TAC Pro, you get a 100% mechanical keypad. This means you’ll have tactile feedback that will make actuating the keys feel natural, offering you a response time that is just not possible with other keypads. 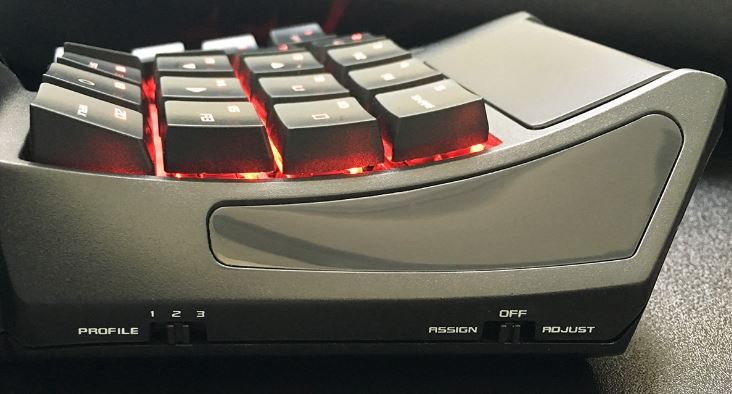 Looking at the keys on the keypad, you’ll find that you recognize most of them. Every key on the standard dual shock controller is represented somewhere on the keypad. Of course, you’ll also notice a few buttons that are new. Most importantly is the “quick” button. Just as the name implies, this works opposite the snipe button. Holding down quick will increase the mouse sensitivity, giving you incredibly fast response times. There is also a “Walk” button, which is used to reduce sensitivity to the analog stick or D-pad (depending on how you have the controller configured) to facilitate slow movement.

The back-lighting on the keypad looks cool, but it’s unlikely you’ll need it. The entire controller is laid out ergonomically and sensibly, making it very unlikely you’ll need to look at it. It’s possible you might have to snag a few glances while learning the layout, but using it feels very natural. After your first few games, you won’t really have to spend any time thinking about which keys you’re pressing. 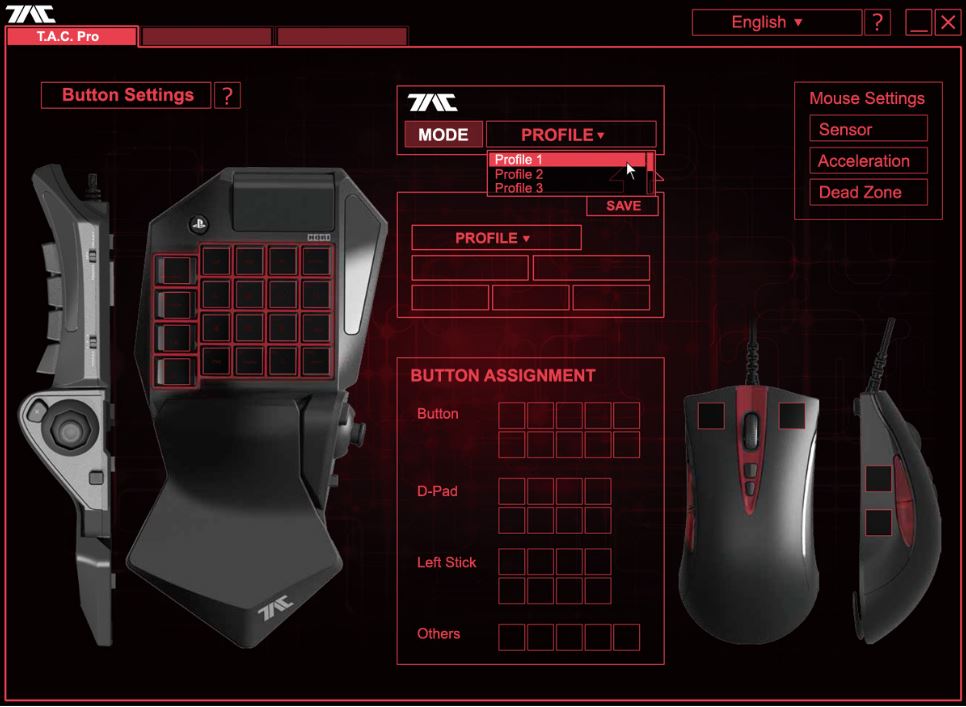 A lot of specialty controllers are designed for certain games. The TAC Pro should be compatible with every game on the market. It’s default layout makes sense for most FPS games, but if you want to change it the entire thing is fully customizable. There is a configuration program included that can be used with your computer. Simply map out the keys you want to use, what they correspond to on your computer and you’re good to go!

Want different control schemes for different games? On the side of the keypad there is a slider switch with three possible locations. Each of these refers to a configuration. You can load up to three different layouts into the keypad, then select the one you want without having to reprogram it.

This isn’t the first TAC controller on the market. In 2011, the TAC 3 was released for the PS3. If you’ve used a TAC 3 before, don’t make any judgements about the TAC Pro. The difference is night and day.

There were a few complaints about the TAC 3. Mainly, the mouse was of very low quality and not particularly sensitive. Other issues were brought up with the keyboard layout and customization. All of these issues have been addressed in the TAC Pro, allowing it to compete with even the fanciest of PC keyboard and mice combinations.

The TAC Pro is a little more expensive than the standard dual shock controller. Is it still worth it? We say absolutely. Consider the features that are present on the TAC Pro. Mechanical keys, for example, will cost you upwards of $100 for a keyboard alone. A 3200 DPI mouse? Not going to happen for under $50. Although there are not quite as many keys on the TAC Pro, the price has been adjusted accordingly. It’s unlikely that you’d be able to find a PC compatible controller available at this price range, making the value that Hori offers very impressive.

There have been some pretty impressive FPS games released on the PS4. The latest DOOM and Call of Duty are obvious hits. Those of us who take FPS gaming seriously will definitely appreciate the additional level of control provided by the Hori TAC Pro, and it will give us a certain edge over our competitors.

If you are not into FPS gaming, there is probably not much value in this controller. It was designed for a specific purpose, and it does that purpose well. Serious gamers will see the value of this controller, but if you are casual it might not be worth it.

But until today, there has been no better way to enjoy FPS games on the console. Perhaps the Hori Tactical Assault Commander Pro is the controller that will finally level the playing field between PC and Console gamers.