Getting an effective router used to be more difficult than it is today. Part of what made it tough was that usually, a single device needed to handle everything. That meant people were forced into buying the biggest, baddest router they could afford. But even then, you’d face limitations. Because a single router can’t be in two places at one time.

Which is pretty much the reason why mesh networks were invented. To help fill the gap. Even though you’re running several distinct routers to create your network, mesh allows those devices work in conjunction with each other in order to make one unified Wi-Fi system. Strangely enough, that can make choosing multiple-router systems easier than single devices.

Plenty of ARRIS SURFboard Wi-Fi equipment is impressive in its own way. A lot of them are rather distinct looking. The mAX Plus Mesh W30 AX7800 combines both of those qualities into one unit. Or rather, two units, as this is actually a two node system. This router might not look quite as distinctive as some of the others in the series, but it’s still got an unusually smart design. 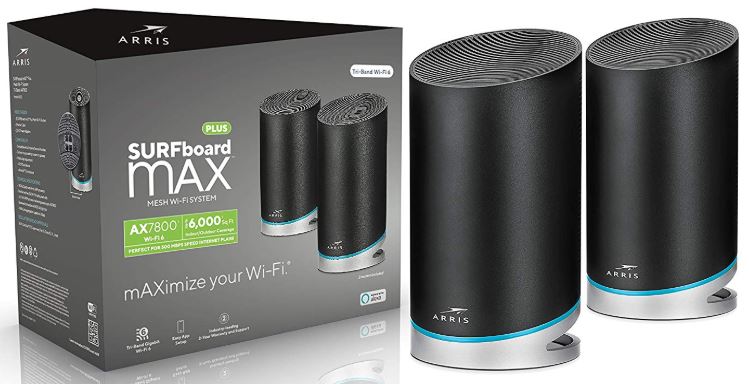 Especially when it comes to cable management, which is something often overlooked when organizing several mesh nodes. Apart from the physical design, the networking hardware itself is stunningly powerful. You can glean most of that from the fact this is an AX7800 device. Even when a ton of that bandwidth is being used-up by network backhaul, you can still squeeze gigabits of bandwidth out of these nodes.

Each node is about seven inches tall, with a diameter of about four inches. And each has an elongated cylindrical shape that’s quite unusual for networking equipment. Along the base there’s a light blue LED that can be turned on or off as needed. Usually it’s not worth dwelling on the aesthetic appeal of networking equipment. But since these nodes are going to require placement where they might be seen, the aesthetic might really count for something.

The fact these routers are standing upright might seem a little odd at first. Many people are used to taking their router and shoving it back into a dark space somewhere, as if it were some kind of Blu-ray player or DVD drive. But positioning is critical for these nodes, and the elevated design allows the antennas a better position within a room as a result. 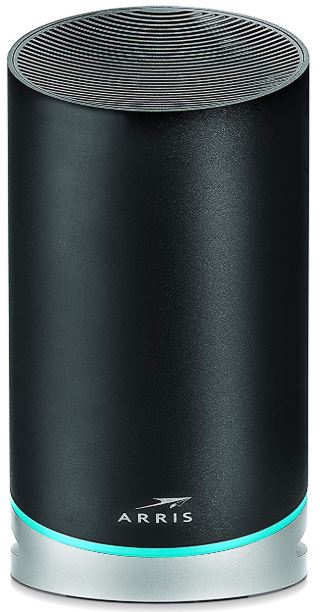 If you turn around to the backside of the device, you’ll find that each SURFboard mAX Plus Mesh node is lifted-up by a circular ring. This ring allows you to connect to the Ethernet ports on the bottom side of the unit, and then have those cables exit elegantly out the backside. It’s a pretty smart design. It might not be much of a surprise, but ARRIS didn’t include alternative ways to mount or hang this equipment. It’s intended to sit on a stable, flat surface, and doesn’t really give you much wiggle room on that.

Oddly enough, one of the most distinctive features of any ARRIS router tends to be the fact they always color-code the user I/O. In this case, they’ve dispensed with the color coding entirely, using a regular black matte I/O instead. That’s probably because the inputs are hidden away on the bottom of the node, where they’re not often seen.

But once you’re looking at the bottom side, you’ll find a total of eight gigabit nodes available in this kit. That’s the result of four hard wired connection ports per mesh node. Internally, this Wi-Fi 6 mesh system operates with 802.11ax. That’s the latest wireless format, supporting the highest bandwidth ceiling you’ll find on any similar equipment. It’s also a forward-looking format, so you can anticipate being able to use it for decades to come. 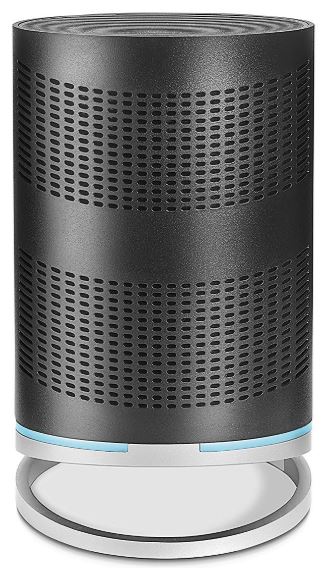 If you’re comparing this router to something like an AC2 or wireless N router, then you’re basically looking at eight times the potential bandwidth. You’re also looking at far better backhaul support, and much better support for other efficiency features. More specifically, for networking features, you’re looking at dedicated 4×4. The gigabit backhaul reaches up to 4.8 Gbps.

As you may or may not be aware, the best speeds are something which are only possible across the 5G band. That band requires the user to maintain line of sight between the router and the device which is connected to it. So when you don’t have line of sight between one of the mesh nodes, you are almost certainly going to be swapped over to the 2.4 GHz band. At that point, your network connectivity speeds will drop towards 300Mbps. A respectable amount of speed, but not the nearly gigabit speeds you can get on the 5 GHz band. 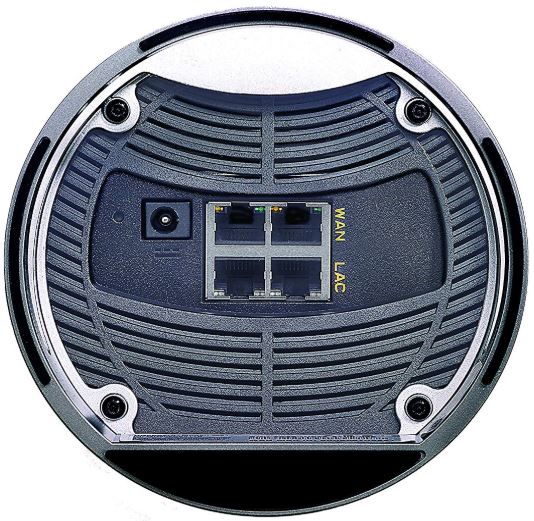 For bandwidth capacity, you can hardly do better than the AX7800. Even households or organizations that are interested in running several 4K video streams at the same time will have no problem doing so across these nodes. This kind of hardware is well suited for people working with gigabit speed internet plans. If you’re running less than a gigabit, then the AX7800 would be gross overkill for you.

The SURFboard mAX was made to be easy to setup. In fact, the inclusion of Bluetooth means that making your network ready for access is as simple as following along through the SURFboard mAX Manager app. Even if the devices you’re connecting with don’t have Bluetooth, from your smartphone or tablet, the app can setup the router for its first time being used. 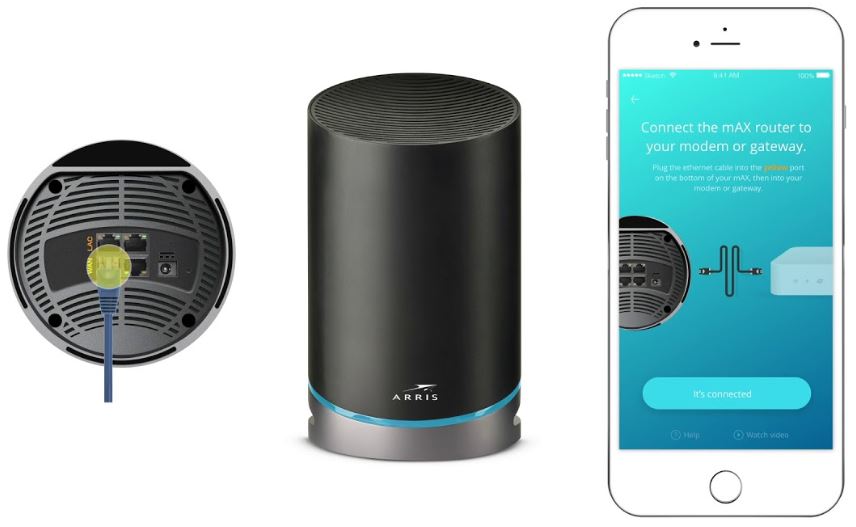 Beyond installation, the app is also useful for basic network management. That includes parental controls, and the ability to establish guest networks. That can be pretty useful for opening your network up to outside users without necessarily placing anything on your network at risk. It’s often a cool feature for micromanaging bandwidth as well, depending on how strong your internet connection is to begin with, and how many people are using the network.

One more thing that might be worth noting is the app also has a system speed checker. If you happen to be curious about how much speed you’re getting from the network, a reading right off your router is pretty convenient. It’s also a good way to figure out if a connection issue is related to your internet service provider or not, and can help you determine better positioning for each node.

Speaking of positioning, how much coverage can you squeeze from two Wi-Fi nodes? Well in this case, between these two devices, you can expect to reach about 6,000 square feet. Interestingly, this is the same amount of space covered by a lot of different 3-unit systems. That’s because each individual unit is actually quite powerful, and could very well be used independently in a respectable way. 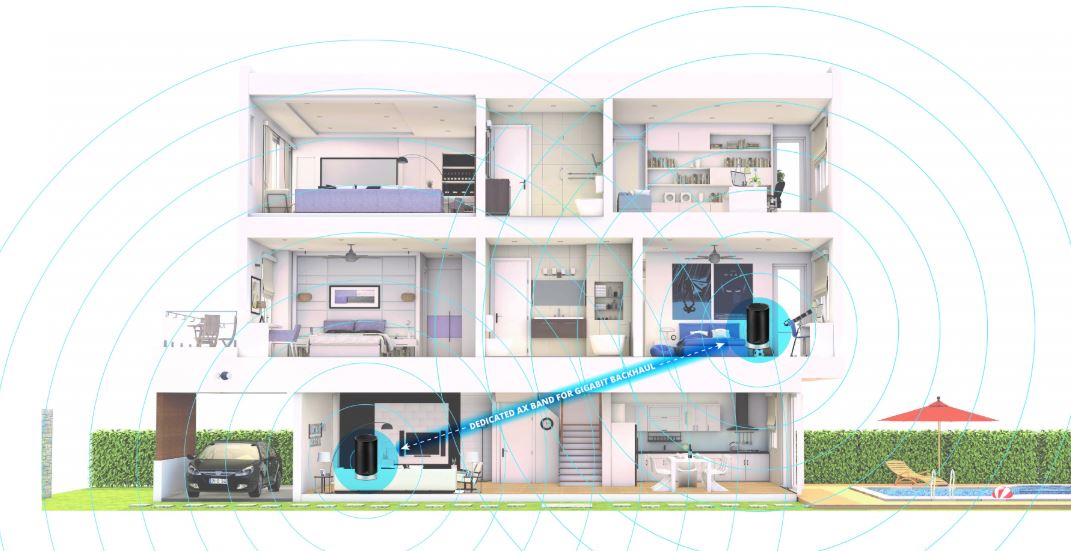 Compared to a more traditional single-unit ARRIS SURFboard, you’re looking at basically twice the connection radius. Of course, some of that depends on your ability to place the nodes in the most appropriate spaces. In real use situations, you might end up with closer to 5,500 square feet.

When you’re picking a higher-end router, security features can be especially important. For the more mundane protections and customizations, ARRIS shoved their full suite into this router. But for the most part, ARRIS does their security through MacAfee, which is one of the larger names in the tech security industry. It also means you get a lot of impressive MacAfee features without having to subscribe to their software program.

At least, for a time. After a few years of MacAfee support, you’ll need to start subscribing or swap to a different service. In any case, much of the security features are handled through the app. That includes the ability to whitelist or blacklist websites, ban users from the network, and so forth. Is also possible to get alerts about suspicions connections on your network, or even some notifications about people who are trying to get around the rules you’ve set for the network.

The app is supported on both iOS and Android. So if you have basically any kind of mobile device at all, you’ll be able to use the app to setup the router. Though if you don’t have those devices or don’t want to use the app, a more traditional installation is also possible through your desktop PC. Your computer shouldn’t have any trouble recognizing the mAX Plus Mesh and starting it use it rather quickly. 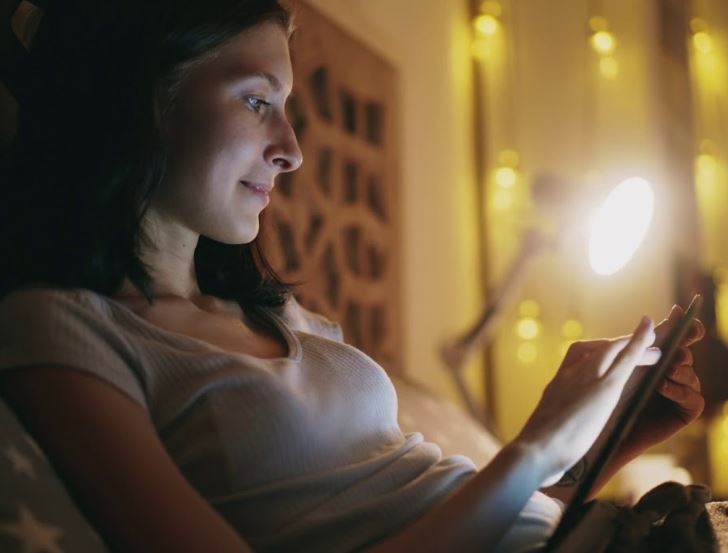 Another thing to note is these routers have native support for Alexa, allowing you to interact without having to wait extra time for responses to be cleared through your network. Native voice assistant support is something that you can take or leave most of the time. But if you make common use of those kinds of devices, being able to prioritize them in your router can be useful.

Another thing to note. You’re going to end up needing to run a modem, since these are router devices and not modems. This equipment doesn’t come with a bunch of added extras, but it does include a two-year warranty from ARRIS. And their tech support is pretty solid.

Who Should Choose ARRIS SURFboard mAX Plus W30 Mesh AX7800?

Technology is speeding right along, but it’s still hard to imagine reasons why the W30 AX7800 would be any less impressive in 10 years’ time. That’s mostly because it’s using Wi-Fi 6, so it has the most forward looking wireless formats out there right now. But also because it’s an AX7800, which is a kind of bandwidth that most people will probably never need.

You could run a small library on a system like this. So these kinds of networking capabilities are going to end up being adequate for people who are running multi-gig networks. They’re also a good choice for people who expect several users to be on their network. Because if you had fewer than 5 people on this network, it would be pretty close to overkill.