Streaming and recording games is more popular than ever. About 100 million people subscribe to streaming sites like Twitch. People who aren’t using Twitch may instead be streaming through their console, or uploading straight to YouTube. It’s not hard to find hundreds of people who’ve made jobs out of their gaming, or taken their hobbies to new levels with better hardware.

Playing modern games can be fairly intensive on your computer’s system resources, from your RAM and CPU to your read/write speeds. Those problems are only getting bigger as resolutions continue to skyrocket past the 1080p standard we’ve all enjoyed for so long. That’s why gamers PCs are amongst some of the most powerful home computers in the world, using much of the strongest consumer-grade hardware on the market.

But recording and streaming is also fairly resource intensive. And when you start gaming, recording, and streaming, something has to give. You might end up turning down the quality of your recordings, dropping your setup to lower framerates, reducing your resolution, or otherwise throwing in the towel. But all that can be avoided with a simple capture card.

For years now, AVerMedia has had a number of fairly interesting capture cards, from basic configurations to more impressive 4K pass-through cards. The latest addition to their line of recording cards is the GC573, a card aimed at helping gamers future-proof their PC for 4K content frame capture, and without the kind of prices you typically see associated with future-proofing hardware. As its name suggests, the GC573 offers 4K UHD game capture, and doesn’t ask you to make deep cuts to refresh rate or bitrate in the process. And that’s why the GC573 is AVerMedia’s current flagship card. 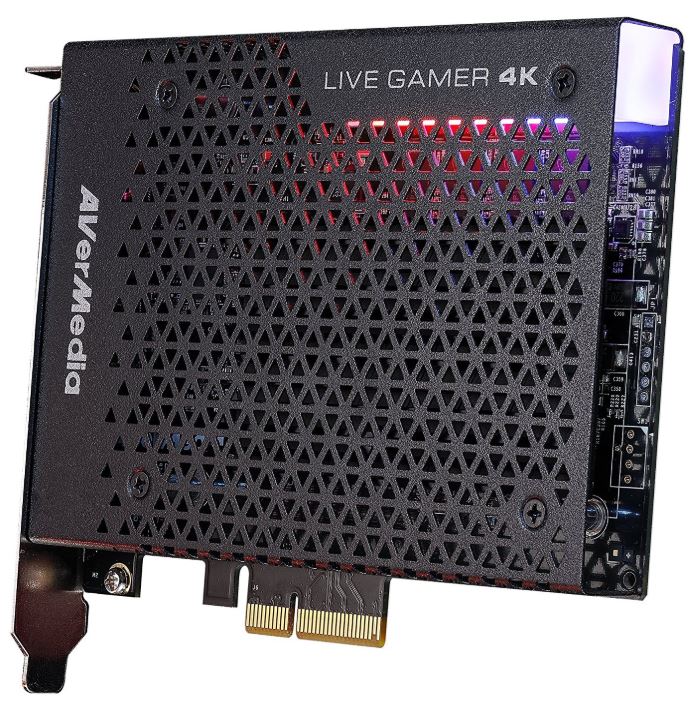 What exactly does a recording card do? If you’ve ever looked at the specifications for computers used by professional steamers, you’ll probably be impressed by how powerful their machines are. And that’s a necessity. Running modern games on higher graphics settings can put serious strain on your PC. When you then ask your computer to simultaneously start recording everything, that only adds to the load. Even impressive and costly machines will buckle from the strain, requiring steamers to cut-back on graphics settings or otherwise suffer through subpar performance.

With the help of a recording card, much of the work of recording can be taken off your CPU and handled by the card. It allows the rest of your PC to have one less thing to focus on, freeing up system resources to run your games at higher settings. For someone who’s constantly recording or streaming, adding a recording card can be tantamount to creating an expansion to your graphics card.

Physically speaking, the GC573 closely resembles any other expansion card, from a network card to a sound card. It uses a common 5 x 8 x 0.8-inch form factor, which makes it easy to slide into even small and packed cases. Aesthetically, the 4k UHD is a gamer product, so it shouldn’t surprise you to see RGB lighting all-along the card. And people who are actually invested in the aesthetic of their case can rest easy knowing you can choose between multiple color presets to better match your own PC.

The GC573 is a PCI Express x4 card, so you can expect the same kind of speedy installation as any expansion card. Provided you’ve ever installed a PCIe device in your entire life, you’ll be prepared. And if you haven’t, you’re still only looking at removing a single screw, and then gently pressing the card into place. There’s no additional power connections, no complications, and no further steps.

You’ll find setup is no more difficult than installation. The only I/O plugs on the GC573 are two HDMI 2.0 ports. One port is for input, and one port is for pass-through. The simplicity of having only two ports is actually quite useful. Even doing the installation carelessly, you’d get it correct on your first try at least half of the time. And because the audio/video input and output occurs through HDMI 2.0, you’ve got all the bandwidth necessary to record at higher resolutions and refresh rates. 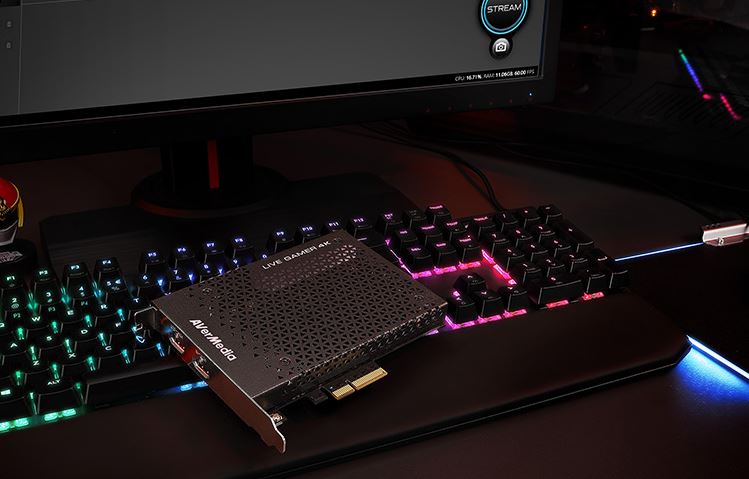 While the GC573 is pretty clearly oriented towards and marketed at video game streamers, but you don’t need to be involved in gaming to make good use of a capture card. Anyone doing computationally intensive recording or streaming can take advantage of the GC573. Files are saved in the almost universally accessible MPEG4 format, and with one of two versatile codec options. Not being able to switch to alternative formats like AVI is unfortunate, but not a game-breaking concern.

One thing to note quickly. Gamers may not be familiar with high dynamic range (HDR), which is an increasingly popular video technique used to enhance visual fidelity. The end result is essentially darker blacks and brighter whites, as well as a generally wider gamut of colors. As increasing resolutions higher and higher produce greater diminishing returns on visual fidelity, it’s features like HDR that really ensure futureproofing for the GC573.

With high dynamic range recording enabled, video quality can be captured at a maximum resolution 4K at 60fps. Recorded quality is set to an exceptionally high 150 Mbps by default with a standard 4K resolution. That can be raised drastically towards 240 Mbps, or reduced to help save on storage space. The maximum capture resolution is 4K with 60FPS on HDR, or 120FPS on 1440p, and 240FPS on 1080p. That’s a fairly wide and expansive range of options, and it provides enough options for people recording at any range of different resolutions. 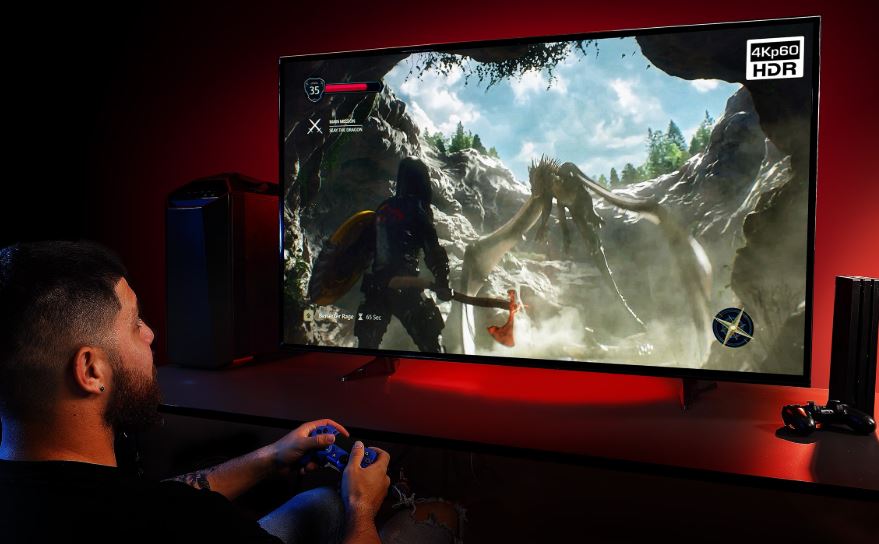 The AVerMedia GC573 comes bundled with CyberLink PowerDirector 15, as well as RECentral software. CyberLink is fairly useful software that typically retails around $50, it’s made for help facilitate video editing with 4k content. RECentral is AVerMedia’s streaming app for streaming, configuring, and recording your content. It has the same degree of customizability as you find in similar streaming apps, giving you the ability to set up your microphone, webcam, digital overlays, and so forth. And its simplicity provides a somewhat intuitive ease-of-use. 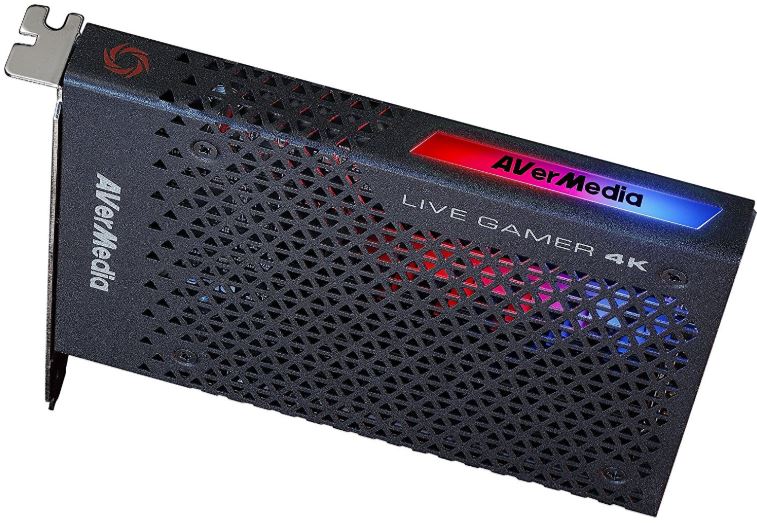 The AVerMedia GC573 has a manufacturer suggested retail price of $299. That’s roughly the same as a midrange graphics card. But the best way to think about the pricing of the GC573 is to look at how much you’d have to improve your current computer to be able to match the GC573. In many cases, it could cost more than a thousand dollars to try and upgrade other components to achieve the performance you can get from the GC573.

That’s because the GC573 doesn’t depend on your components running harder, it’s speeding up your computer because it’s utilizing idle PCIe lanes. You might think of it like getting untapped power that already exists out of your machine. For people who spend a significant amount of time streaming or recording, missing a recording card like the GC573 can be tantamount to missing a graphics card. By pulling the computational effort of recording and streaming off your primary PC components, you can typically start increasing your graphics settings in response.

It may also be worth noting the Live Gamer 4K is available in several versions. One step down from the GC573 is the GC553, a laptop-oriented USB-based record card. While the 553 doesn’t have HDR support and lacks the nifty-looking LEDs, it has an MSRP that’s about $50 less expensive for a more barebones setup. 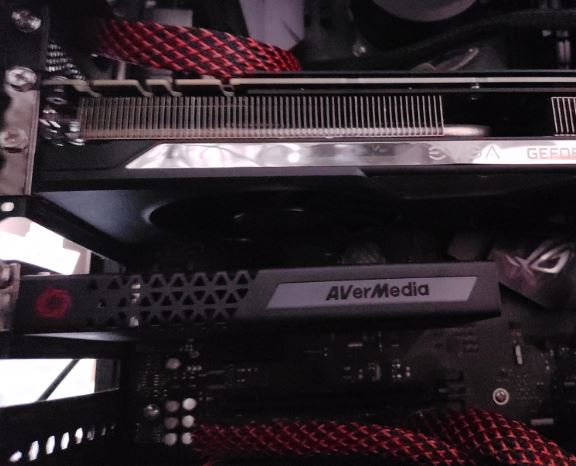 Linux users will find the same lukewarm degree of support they’re used to experiencing. Basic screen captures aren’t a problem, but you’ll find the AVerMedia RECentral software doesn’t work at all for Linux. Fortunately, if streaming is your intention, it’s not too difficult to find third party software.

One potentially agitating issue is that the GC573 has essentially zero online documentation, FAQ, or online support options. If you’re unfortunate enough to run into an issue, you can expect solving it to be a time-consuming process.

TheGC573 Live Gamer 4k also supports PC-free recording mode using an SD card. While the GC573 can be used without a PC, you may encounter some small hurdles depending on how you’re trying to connect. For a straightforward installation, like sticking the GC573 into your PC, you won’t encounter any issues. But if you’re trying to do something more obscure, like capture audio from an XBOX controller through the 3.5mm connection, you may encounter issues that require more hands-on solutions. 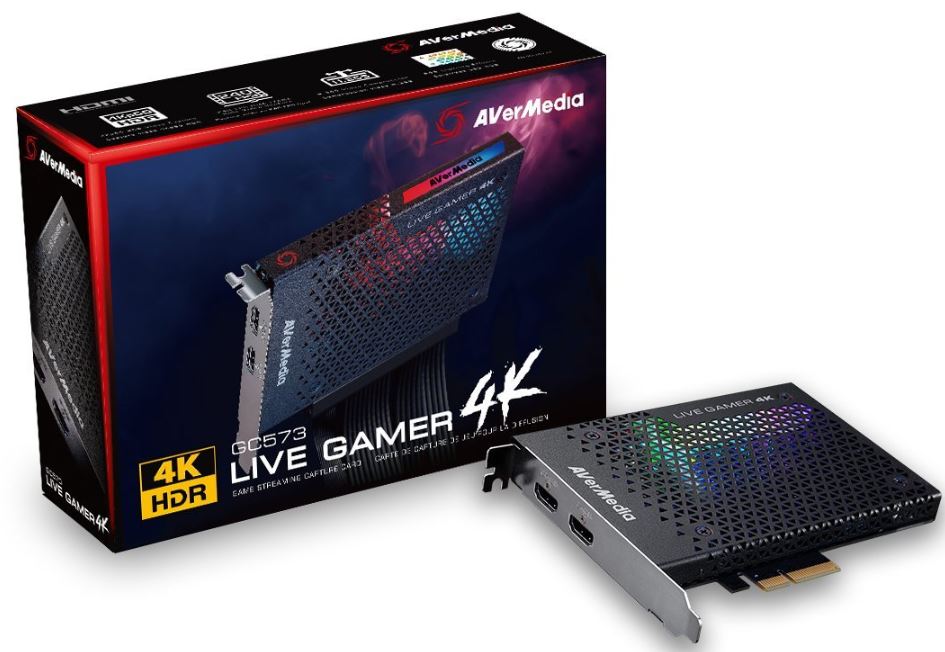 Who Should Choose the AVerMedia GC573?

The GC573 is a good choice for anyone involved in regularly streaming or recording content on their computer. Whether as a hobby or as a professional, the GC573 offers a chance to speed up your computer in ways that are drastically more economical than overhauling your critical components. It’s particularly well suited for people who are working in higher resolutions like 2K or 4K, but even if you’re still working in 1080p, the GC573 can help futureproof your rig. It has an SD card for PC-free operation.

The GC573 is obviously useful for people who already struggle with the computational loads of recording and streaming during gameplay. But it’s just as useful for people whose streaming is currently doing well. The GC573 has so much future-proofing lacquered on it that any serious streamer will benefit from having it sooner or later.

Getting started with streaming can come with a pretty steep learning curve. The GC573 is an especially strong choice for people who are just getting started with video editing and streaming. The GC573 includes everything you need to begin streaming and editing, from their easy-to-use streaming software to 4K editing tools. You don’t need to take advantage of the software AVerMedia has packaged in order to get a good value from the GC573. But if you can use those software tools, the GC573 is an incredible value.