If you’re looking for a simple radar detector that gets the job done, the STi Magnum should be your first choice. The main selling point for the Magnum is it’s long range dual antenna along with 3 main sensitivity settings you can use depending on where you live to find out if law enforcement is near. The good part is that you don’t need experience working with electronics nor do you have to spend hours shifting through the instruction manual – the design puts an emphasis on functionality and it couldn’t be any simpler. This detector has a reputation for effectivity and the only thing separating it from higher end detectors is the lack of GPS functionality. 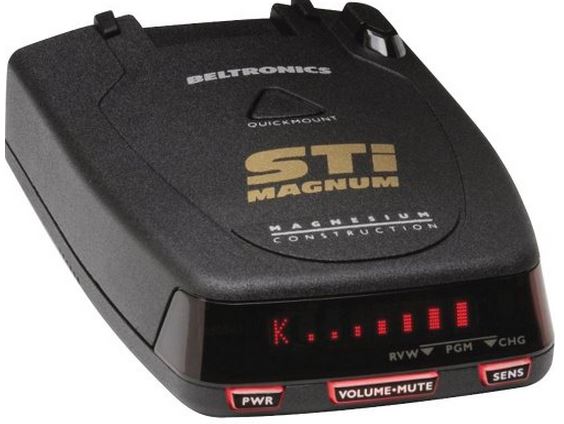 The bottom line is that if you don’t want to pay a lot of money but you still want the benefit of being able to hide your detector from the police, this is one of the very few viable choices. If you compare it to previous Beltronics releases, the 0150000-E STi Magnum Radar Detector offers at least 50% improved performance and the technology included in it basically makes sure you’re invisible to newer detection devices.

This device came out as demand for more invisible radars increased and stealth technology started becoming the norm. It was actually one of the first radar detectors offering complete undetectability and the initial investment is small compared to the total value you’re getting with a feature set of this kind. It works against pretty much all radar detectors and especially useful if you’re using it in Virginia or Washington D.C.; Additionally, even if you don’t live in states/areas where radar detectors are illegal, you can still draw less attention from overly enthusiastic cops.

It really couldn’t get better than the Beltronics stealth technology and they call it TotalShield – this is basically technology which allows you to remain undetected regardless of the type of “detector detectors” law enforcement is using. Additionally, if police in your area are using more advanced Spectre or VG2 tech you’ll be covered as well. They’ve really gone out their way to ensure consumers get the latest of technology so you’ll not only remain undetectable today but if the police decide they want to upgrade their equipment you’ll still be ahead of the curve.
One of the main and equally important features of the STi Magnesium is its digital signal process.

There’s a standard auto-scan feature embedded which people usually notice raises false flags but the one here will filter through every signal and make sure the false ones get weeded out because there are lots of signals out there, especially when driving through heavily urbanized areas. The best thing about it is that combined with complete undetectability, you won’t be constantly overwhelmed by false alerts.

As you probably notice, the 0150000-E STi Magnum Radar Detector is packed full of advanced, practical features that allow you to have a more peaceful driving experience and one of them is laser detection, basically responsible for sniffing out all these sensors in the area as you’re moving and using voice alerts to let you know the kind of threat you’re dealing with but without distracting you much. The city mode has different levels and the display is readable enough that you’ll get the information you need regardless of angle.

The main one is that it doesn’t come with a GPS feature which basically excludes the option of using marked/preloaded locations, speed cameras and bumps. As a result you won’t be able to mark threats you came across or block out false alerts while sharing it with other users in the area. The only way you can get around that is by using the GPS feature on your phone and then connecting it through Bluetooth. There’s a plug on the Magnum allowing it to connect directly to your phone and then you can use Escort Live which is a fairly popular app. Although not as straight-forward as simply working with a GPS device, you can still make this work if you’re inclined to.

We basically recommend the Beltronics 0150000-E STi Magnum Radar Detector for people who are always out there on the road, especially during long trips. The main benefit to purchasing it is that although it’s not as cheap as certain units out there, it’s going to pay for itself even if it prevents you from getting a single ticket. It has a great reputation and definitely lives up to it.