You need to gauge the direction and speed of the wind, but you probably don’t want to have and rely on your best judgement. To get the job done properly, you need an anemometer.

Analogue anemometers are bulky, to say the least. Even if you’re not acquainted with anemometers, you’ve probably seen equipment resembling one already. Analogue models often work by having the force of wind impact against small cups, which rotate mechanical arms attached to the wind-cups. When the wind blows faster, the cups spin quicker.

People place basic machines like these in their yard as decorations, but using a device like this to measure wind speed was actually the invention of an Italian architect about five centuries ago. Fortunately, we don’t have to rely on analogue equipment anymore. Our technology has moved on.

Finding the right digital anemometer requires a detailed understanding of the kind of measurements you intend to take. Are you working in stationary conditions? Are you doing mobile monitoring? Seemingly small differences can have a big impact on the performance of an anemometer. 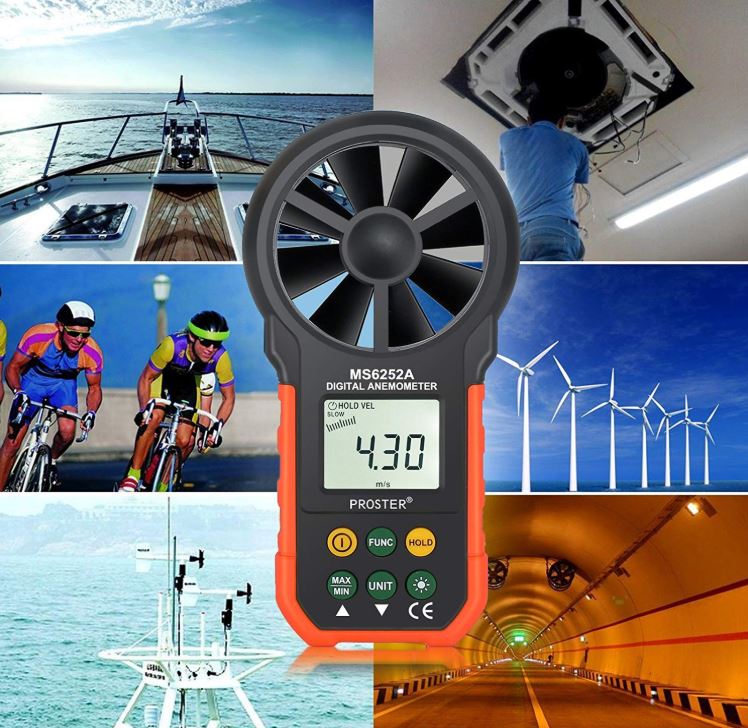 Because you’re using an instrument to take measurements, one of your first concerns should be the accuracy of the instrument. How much accuracy you need depends on how you intend to use the information. If you’re a marksman who’s taking a long-distance shot, then you aren’t going to care if your reading is off by a 0.2 miles per hour.

But if you’re taking scientific measurements or working around hazardous gasses, you’ll likely want greater levels of precision to match the intensity of the tasks you have in mind. If you have no requirements for heightened accuracy, you don’t have to pay much attention to this kind of variable.

You may also want to concern yourself with metrics. Are they reported in meters or inches? Can you switch between the two? Don’t take these kind of features for granted, or you’ll end up having to do calculations in your head.

Most anemometers will be restricted to measuring about 100mph. If you want to go well past that, you’re going to have to get a specialized instrument. But the 100mph limit shouldn’t be too dispiriting for most people. At least, as long as you’re not trying to chase hurricanes.

You’ll also need to think about the specific types of events which you’re trying to measure. Are you trying to measure a sudden gust of wind, or trying to take repeated measurements in rapid succession? Response times can be critical. You don’t want to have to wait around between each reading, or have a response time that’s too slow to properly capture a short burst of speed.

Digital anemometers tend to be pretty small, often pocket sized. Consequently, size isn’t as much of an issue because nearly all tend to be fairly portable. But the quality of their construction remains as important as any measurement tool. Especially tools subjected to forces like wind, which may be filled with small bits of particulates and debris that make high speed impacts with the instrument.

You might also consider whether the anemometer can be stuck to a tripod, or otherwise fixed against a stationary surface. Even mobile anemometers are often capable of that kind of measurement. 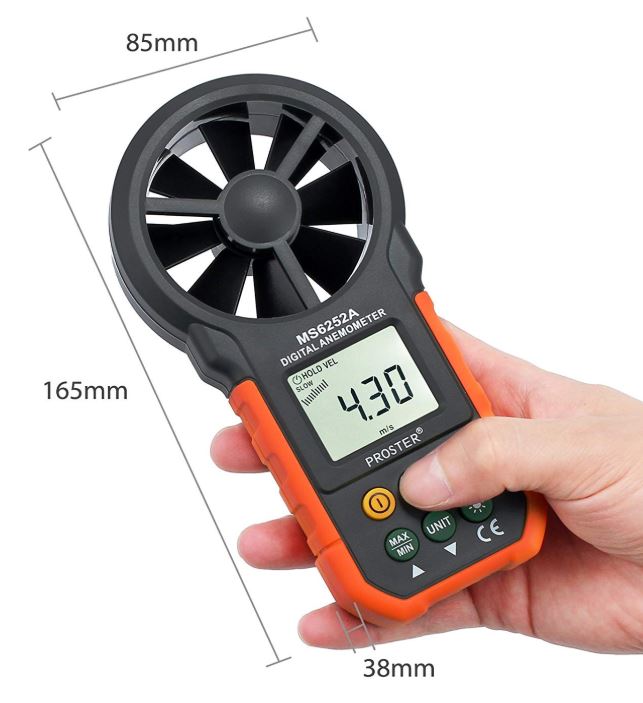 The Proster MS6252A is a terribly precise little instrument. It’s also one of the coolest looking anemometers you’ll ever see. It’s widely versatile for indoor and outdoor use. Whether you want to measure the airflow of an office, or study the weather while windsurfing, this multipurpose design is up for the task.

From a technical standpoint, this anemometer reads speeds of up to 30 m/s. That works out to about 108 miles per hour, within an accuracy of about two percent. The measurement fan blades are quite impressive as well. Their CFM ranges between 0 and 99,999, which is what allows this anemometer to detect speeds in excess of a hundred miles per hour. 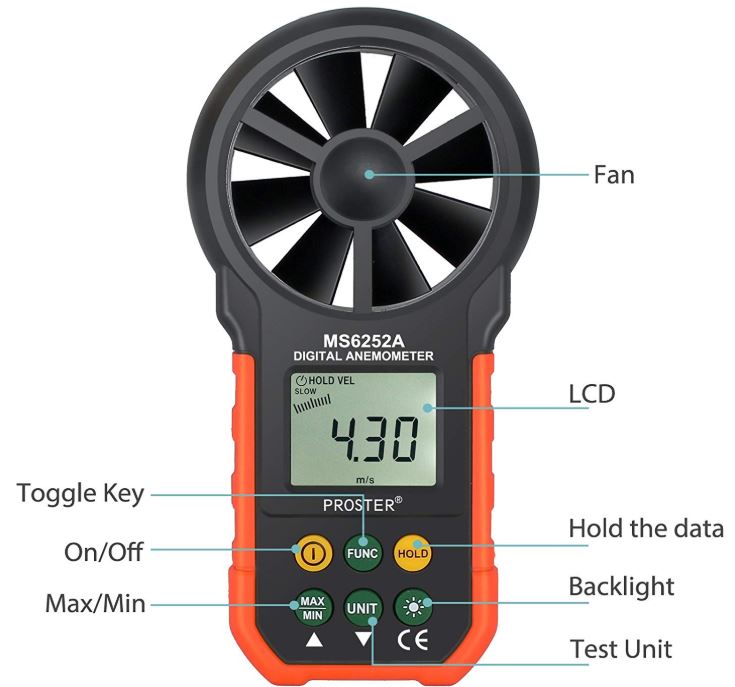 The MS6252A measures 7.6 x 4.4 x 2.4-inches, with a bright orange and black chassis that’s quite distinctive of the Proster brand. It might not be fair to called this instrument pocket sized, especially because you should be careful with the fan blades. But it’s certainly handheld, and it doesn’t feel weighty because it weighs only 10 ounces.

Like you want from this kind of instrument, it’s got a portable and professional design from top to bottom. On the front side, a large LCD display gives you highly visible readings for your data. The display is also backlit so you can use the instrument in any level of light.

The display can even be turned bright enough for you to read it while the sun is bearing directly down on the screen. However, you’re generally better off keeping default brightness unless it’s absolutely necessary to increase. Because brightness is one thing you can change which will actually have a significant impact on your battery. 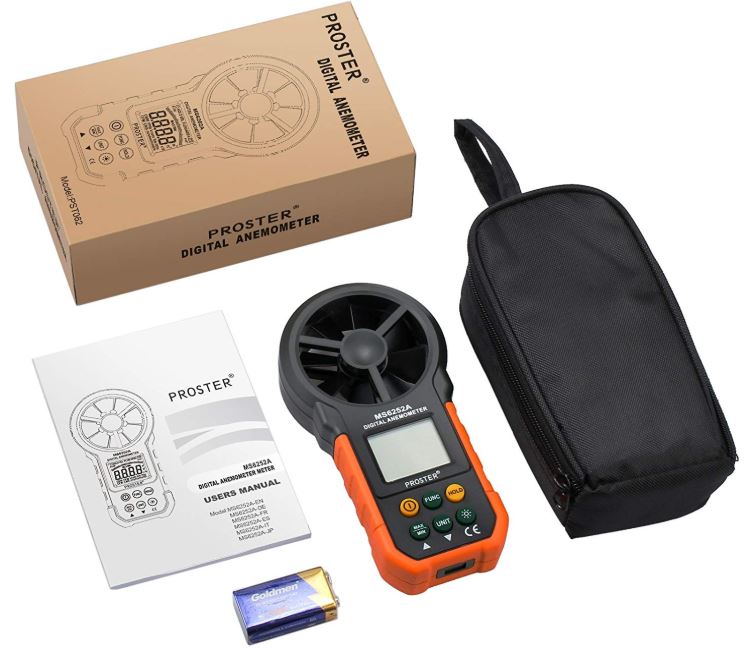 Speaking of batteries, the MS6252A Digital Anemometer uses a 9V6F22 battery that’s included with the kit. After a couple months of use, the display will provide a low battery indicator to let you know it’s time to consider replacement. That kind of extensive use is possible because of an auto shutdown feature, which ensures you don’t forget to turn off your anemometer when you’re done using it.

The MS6242A is pretty easy to use. It features a multi-function button that can be made for holding your readings on the display, viewing maximum/minimum data values, or otherwise facilitating all the tools you need for fixed or handheld measurements. 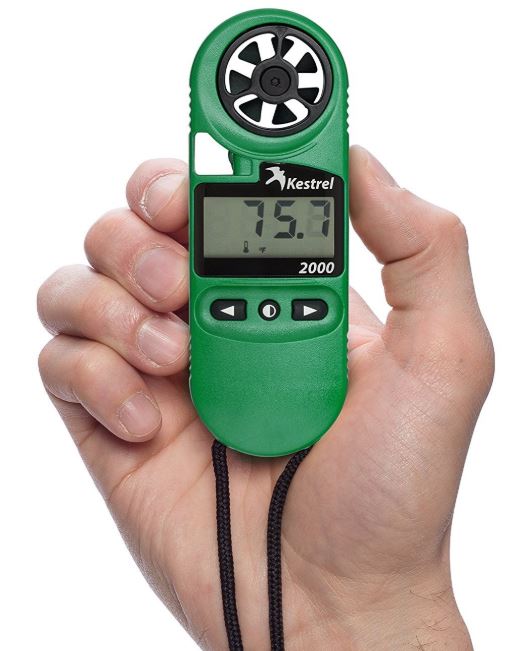 The Kestrel 2000 is supposed to be a rugged pocket wind meter, and in most regards it is. This model, the 2000, is widely used in educational capacities. But it’s actually suitable for any number of different projects, including flying kites or drones, playing golf, sailing, fishing, aviation, and so forth.

The Kestrel 2000 is even useful for some types of research because it’s capable of measuring air speed, wind chill, and the temperature of water, snow, and air. Measurements are available in both °F and °C, so it’s easy to see why so many people use it for education, too. 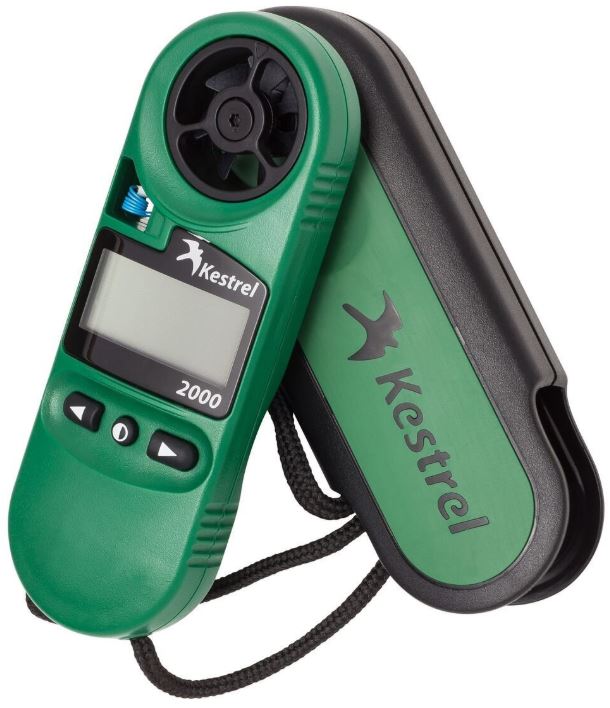 This Pocket Wind Meter measures 6.0 x 1.1 x 3.0-inches, and weighs only a couple of ounces. The forest green chassis might not be too pleasant on the eyes, but it’s IP67 certified. That allows the instrument to be totally watertight, and even capable of floating. It’s also been tested to meet military drop-test standards.

Atop the instrument, a fairly impressive little impeller allows you to take handheld airflow measurements with great responsiveness. Those measurements are read-out on a fairly small LCD display. But the display only burdens itself with the responsibility of reporting some fairly basic information, like temperature. And when you’re trying to display three digits, you’ll find the relatively small display is actually highly readable, even from a short distance. 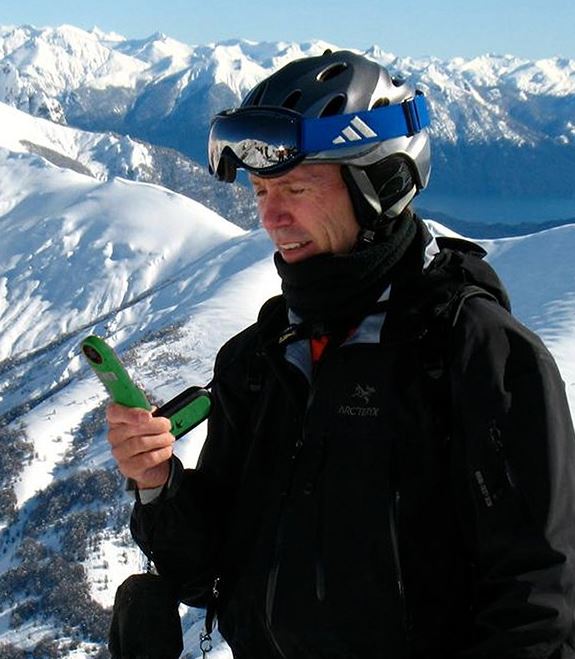 It may interest you to know the Kestrel 2000 is made in the United States. Additionally, the Kestrel 2000 includes a slip-on cover. The cover isn’t terribly useful because the instrument is already terribly sturdy. But the cover does make it a little easier to transport. It also includes a neck lanyard, the CR2032 battery that’s necessary for operation, and a 5-year warranty.

That battery is the standard cell-battery you can find inside basically any drugstore, or online, quite easily. They’re also pretty cheap, and for devices like the Kestrel 2000 Pocket Wind Meter, help ensure you can expect literal months of battery lifespan. Though battery outcomes do change depending on the weather, you may encounter shorter lifespans if you’re measuring in arctic conditions. 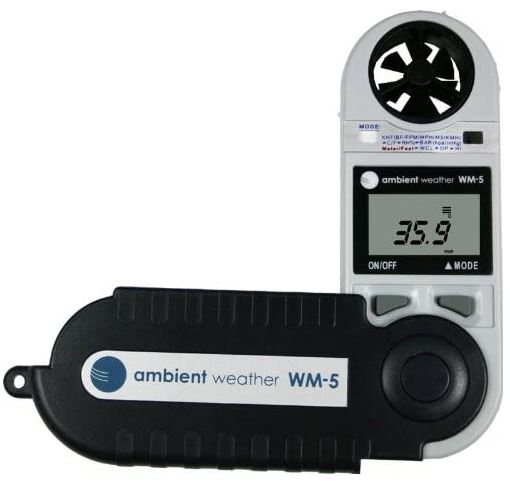 The Ambient Weather WM-5 can measure temperature, relative humidity, wind speed, wind chill, and dew point. Like the other digital anemometers on this list, it will display those temperatures on conditionally readable LCD display.

And similar to the other anemometers on this list, the display is pretty easy to move through. After all, the device only uses two buttons. But that’s all you need to toggle between units/modes, and to turn the instrument on and off. Sometimes simple is easy to appreciate.

As mentioned earlier, among its many functions, the WM-5 is capable of displaying the present temperature, the current and maximum temperatures, and the average wind speed. Basically, this instrument has every feature of the SM-18, with the addition of a hygrometer that allows you to measure dew point and humidity.

When it comes to accuracy, you’ll find the WM-5 comes close to bringing your results within a 3% rate of error. Though to achieve those levels of accuracy you’ll want to mount the WM-5 to a tripod or another stable fixture.

The included Honeywell humidity sensor is famously easy to recalibrate. But you probably won’t have to spend much time involved in recalibration at all. In fact, if there’s one flaw with the Ambient Weather WM-5, it’s the build quality. The quality of this instrument is a little underwhelming. The all-plastic body feels a little cheap in your hands, and doesn’t give you much confidence in the longevity of the product.

In other words, it’s not intended to take abuse, like some of the other instruments on this list. Though outside of extreme cases, the instrument itself is about as sturdy as an anemometer needs to be. And Ambient Weather’s 2-year warranty is there to challenge preconceptions about the longevity of the instrument.

Choosing Between Three of the Best Digital Anemometers

The Proster MS6252A Digital Anemometer is a fairly basic, and fairly inexpensive anemometer. It’s not going to provide scientific levels of accuracy, but its sensors provide accuracy that are enough for most people in most circumstances. The LCD display is arguably the best of the three on this list, and its six button operation isn’t confusing in the least. That makes the MS6252A Digital Anemometer a solid choice for someone interested in measuring wind speed and nothing else.

The Kestrel 2000 Pocket Wind Meter is more than a speed-reader, it’s also capable of measuring ambient temperatures and wind chill temperatures. The physical construction makes it somewhat of an eyesore, but it’s nevertheless very sturdy. Designed to survive drops, and survive interactions with moisture, the Kestrel 2000 Pocket Wind Meter is an especially a good choice for anyone working around large bodies or water.

Finally, the Ambient Weather WM-5 is capable of measuring not only wind speed, but wind chill and dew point. That’s because it’s not only an anemometer, but a hygrometer as well. Additionally, the instrument is capable of being mounted for fixed readings, or taken mobile due to its pocket-sized body. Though these kind of capabilities aren’t useful for everyone, they do make this instrument an excellent choice for a weather station. That makes the WM-5 the right choice for someone who can make use of most or all of its unique talents.

Guide to the Best Self-Adjusting Wire Strippers for …
November 5, 2022