Although serial technology is still essential in modern standards, when somebody refers to a serial port they’re almost always talking about that trusty-old RS-232 standard. This standard was first introduced in the 1960’s, where owning a computer meant that you were a multimillionaire. Hardware that communicated over the RS-232 standard is still being produced to this day, most commonly found in commercial and industrial environments.

With all this hardware out there, it’s surprising that hardware manufacturers are rarely including serial ports with modern PCs. Some consumers even believe that they have to throw out their old serial hardware and replace it with expensive USB equivalents.

Fortunately, this is not the case. There are tons of affordable PCIe serial cards on the market. But not all of them are created equally. When you’re spanning 50 years of computer history, you can be sure that there are a lot of variables in play. But the choice doesn’t have to be difficult. We’ve gone through and identified the three best PCIe serial cards on the market. We’ll help you understand the differences between them, and pick the one that’s right for you.

If you’ve been keeping up to date with us, you’ll surely be familiar with StarTech.com hardware. This company specializes in hard to find cables and interfaces, focusing on affordability and reliability. But there is a specific reason we regularly feature their brand. This is one of the few hardware companies registered with the International Standards Organization 9001 designation. Their hardware meets all international standards, providing superior compatibility even with rare or hard to find hardware. 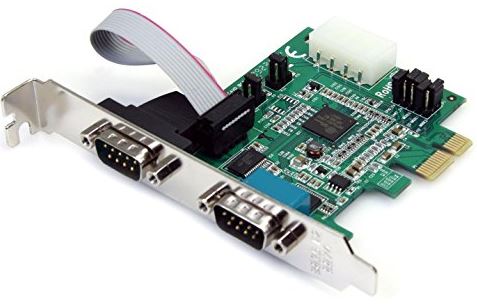 While their standard card is a simple two port PCIe card, there are a number of options available for almost any application. You can get their cards with anywhere from 1 to 16 ports. If you’re shopping for four ports or more, you’ll find that their cards ship with a proprietary connector on the back, but include a breakout cable that converts that single port into the appropriate number of female RS232 ports

If you’ve got a compact integrated system, you might have half-height PCIe ports. In this case, you’ll be able to purchase the low profile models. These are available in one or two port cards. The two port low profile card divides the ports onto two backplates, so it will occupy the space of two PCIe cards. 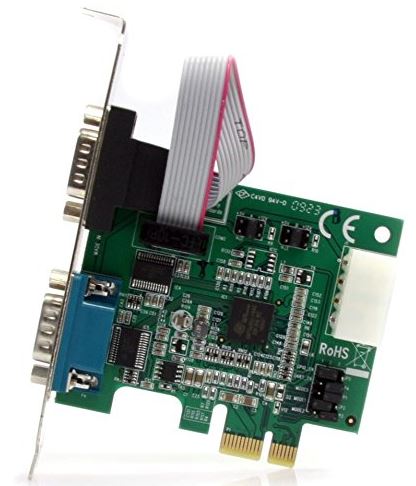 All of StarTech.com’s serial card options use the PCIe 1.0 standard. They only operate on a single bus, but they will work in any port size from 1x to 16x. This card is designed for use primarily with the Windows operating system. There are official drivers available for every Windows OS from XP to 10.

One of the most unique features of the card is the ability for IRQ sharing. IRQ stands for interrupt request. This is an old technology that allows the software to tell the hardware that it wants to communicate with a specific device installed in your computer. (Any one else remember setting your sound card IRQ to 16 to get your shiny new sound blaster working in Duke Nukem?)

Today, there are too many devices to give each one of them a specific IRQ that is addressable by older, 16 bit software. But this card supports IRQ sharing. This allows old devices to work with modern hardware, something that you won’t often find. If you still have any DOS era peripherals or plan to use 16 bit software in a virtual machine, this card is the perfect choice. 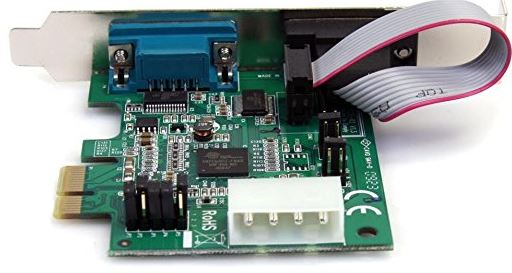 Now, to convert the serial signal to something the PCIe bus can understand, there needs to be a chip to interpret the communication. This is done through the 16C1050 UART chipset. Many cards use a single controller that the serial ports share, but this one has two dedicated chips. This reduces load on your CPU, and keeps performance snappy.

Towards the tail end of the serial port era, there were some high speed devices available that required bandwidth of up to 460 Kbps. Although they are rare, this is one of the few cards that supports this bandwidth. This is important to note for anyone who has more recently developed serial hardware, as you’ll want your PCIe card to support the format.

IO Crest, as a company, seems almost deceptive in nature. At first, they look like your regular, everyday, bargain brand. The name sounds almost and unfamiliar. Their products are affordable. But what you don’t realize is that IO Crest is huge. They’re one of the most well used hardware manufacturers. Their products are sold to white label vendors, and can be found in computers sold by big-name brands. The takeaway is that they offer value. You get their products at the price of low end brands, but you get that big-brand quality and reliability you need. 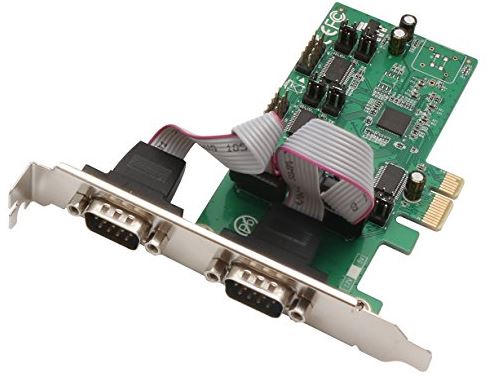 The standard model offers more value than you’re used to seeing at this price point. It includes not one, but four serial ports. Two of them are attached directly onto the card itself, while the other two come in the form of headers. They include a second face plate with ribbon cables that plugs into the card. Although they take up another backplate slot in your computer, there is no obligation to use them if you don’t need them. The choice is yours.

The additional options are available for unique systems. You can use the Mini PCIe slot commonly found in integrated systems and some servers. The PCI version is available for classic systems, and there is even a universal USB serial hub, although there are some bandwidth limitations on that model. 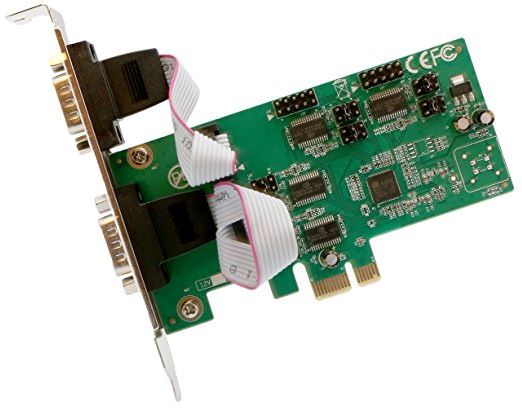 This is one of the better supported cards on the market. It works out of the box with Windows XP through 10, and has Linux compatibility. Because this card is bone-standard, some linux distributions (Ubuntu, or any other Debian based distribution, for example) have driver packages directly through the Apt repository.

One of the most important aspects of this card is support for UART standards. These standards are often used in manufacturing, and conformance is critical to the operation of expensive hardware. 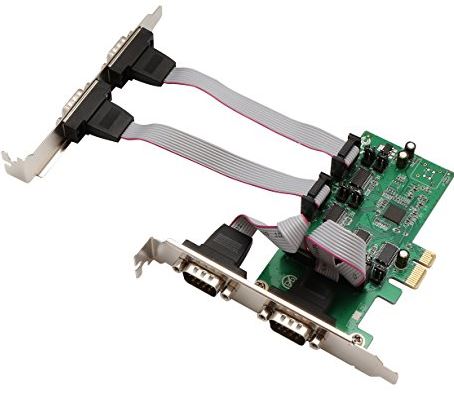 Just like the top-tier cards on the market, this particular card supports high speed data transfer rates. Across all four ports, a total of 128 Kbps is available. This, alone, acts as a clear indicator that there are four separate controllers on this card. None of the ports are sharing channels, and none of the communication is offloaded to your CPU. This means that you’re not going to have any performance issues, even with complicated hardware.

If you’re looking for the cheap and cheerful alternative to expensive, high end cards, Syba is the brand you’ll want to look for. For 90% of users, all you need is a basic card to connect standard serial hardware. Syba knows what most consumers need, so they can remove unneeded features to make hardware that is more affordable than competing products. 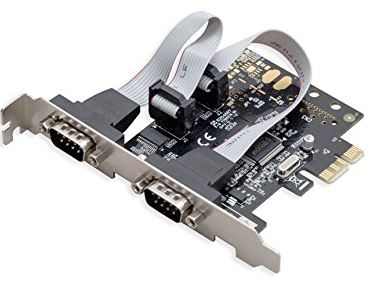 Although there is only one card available, Syba has managed to cover a multitude of usage scenarios. Standard computers will use the card as-is. If you’re in need of a low-profile card, there are two separate backing plates available. You can use a single backing plate with a single serial port, or install a second in the other. Although the main backing plate is full size, the card itself is half-height, ensuring compatibility in any system. 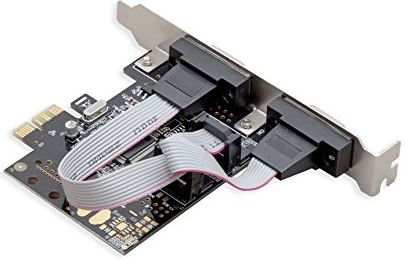 This card is compatible with both Windows and Linux operating systems. It has the MCS9922 chipset, which is commonly found on many motherboards. This means that every modern operating system should support it right out of the box, no driver installation necessary. But once of the things that stands out about it isn’t operating system compatibility, but hardware compatibility. It has full 256 byte FIFO support, indicating that it can deliver large chunks of data sequentially without errors or timing issues. It also has UART support, something that is almost unheard of at this price point. 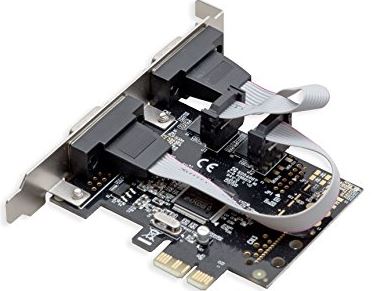 This card does have a dedicated hardware interpreter chip, but this is shared between two separate ports. If you’re using a high speed serial device, you can only use a single port. Fortunately, most devices don’t operate at full speed. This allows the bandwidth to be divided up between the two ports, maintaining your high performance.

Which PCIe Serial Card is Right For Me?

Not sure which one to buy? Most of them operate on the same PCIe bus, and most work with the Windows operating system. The one you choose will depend primarily on the number of ports you want to use and the type of hardware that you’ll be running.

If you’re running oddball or high performance hardware, then you likely don’t want to take a risk knowing that one card might not work. In that case, consider the StarTech.com PCIe RS232 Serial Adapter Card. This card is the most well-made and built to meet every RS-232 standard on the market. This provides it with superior compatibility and above-average reliability. Although it’s a little pricier than some, the cost is still very low. But where this card shines is in the inclusion of IRQ sharing. This allows older style software to properly address older hardware in the modern computing environment. Where hardware is concerned, anything that won’t work with this card will likely never work with a modern PC.

Want four high-speed serial ports? The IO Crest PCI-Express 4-Port DB9 Serial Card is for you. This model has not one, but four dedicated controllers, each with it’s own port. This means that every port has full bandwidth, so you’re not going to find performance lagging when you have multiple devices plugged in. This is most important for hardware that runs on a timing system, since getting data delivered at exactly the right moment is a crucial part of having this hardware work.

Just need something basic? The Syba Serial DB9 RS232 PCIe X1 Card is definitely the best bang for your buck on our list. If you have a single high speed serial device, this card will work perfectly. If you have two standard speed devices, you’re still in luck. For 90% of consumers needs, this card pulls through. In fact, you don’t even have to order a special version if you require half-height cards. The free included brackets take care of those needs for you. This card is fairly bare bones, but more often than not, that’s all you need.