Few inventions have shaped the way we cook like the microwave oven. We’re not saying that instant TV dinners are gourmet food, but they’re convenient on a busy evening. Microwaves are also great for leftovers.

Instead of eating your food cold or reheating it in the oven, you can nuke it in just a few minutes. Microwaves can even be helpful for food prep. Suppose you’re making cookies and forgot to soften your butter. You can pop it in the microwave for a few seconds, and it’s ready to go. So even in the world’s fanciest kitchen, you’re going to see a microwave.

A good microwave can last for well over a decade as long as it isn’t abused. The only moving part is the rotating tray in the bottom, which has a small, simple motor. There just aren’t that many things that can go wrong.

That said, your microwave has a light bulb that lets you see what’s going on inside. And that lightbulb is a common point of failure. It’s going to burn out eventually, and will die pretty quickly if you use your microwave a lot.

So when you replace your bulb, it makes sense to choose a modern LED option. It will last longer, maybe as long a your microwave oven. And it will stand up better to the temperature changes in a convection oven. 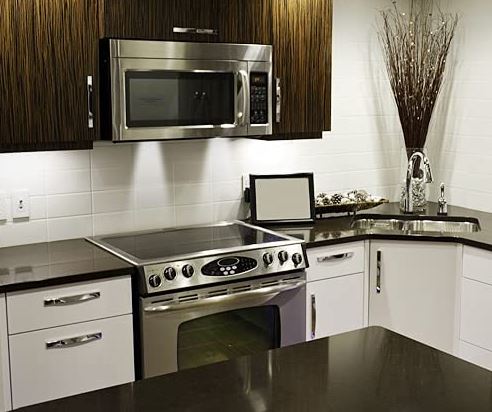 We’re about to review three of the best replacement E17 LED bulbs for microwave ovens. All of these bulbs are designed to fit in a standard microwave bulb socket. They’re durable, and any one of them would be a great choice. That said, there are still some significant differences between the three of them.

For one thing, we’ll have to look at the color temperature and brightness. These are important considerations, since you may want something that’s comparable to your original bulb. We should also discuss their lifetime hours rating, and any special features they offer. After that, we’ll have a more complete picture of our options. Let’s dig a little deeper, and see what we discover! 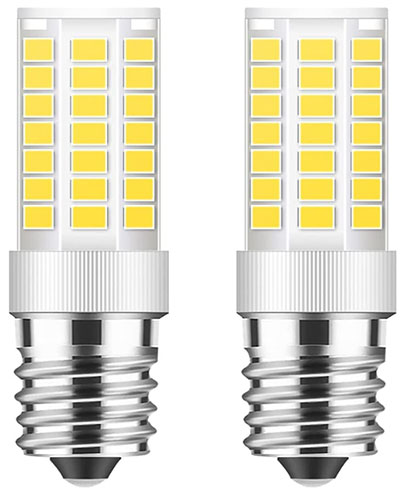 The TAIYALOO 5W E17 LED Bulbs are named in plural for a reason: they come in a two-pack. Each bulb has a roughly square-ish profile, with rounded-off edges. Inside is a white ballast with a set of LED diodes on all four sides. The sides of the bulb measure 0.73-inch across, and its total length is 2.1 inches. The base has a ceramic ring at the top to dissipate heat, with a high-quality nickel-plated threading. 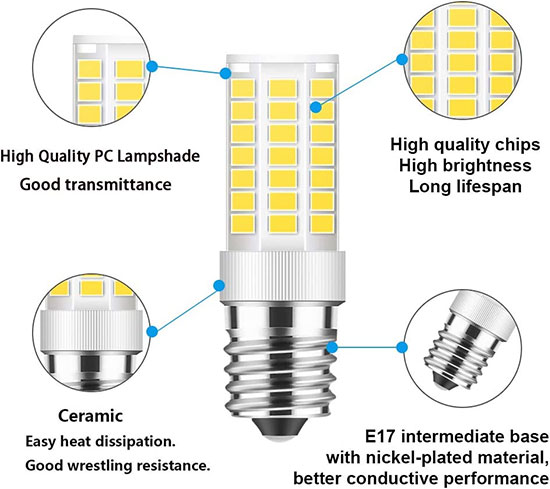 This is a 5-volt bulb, which provides plenty of brightness. Keep in mind that LED bulbs provide way more power per volt than old-school bulbs. So you’re looking at a fairly bright bulb, equivalent to a 40-watt halogen bulb. This is great news if you have a large microwave or convection oven that requires a lot of light. As for color temperature, you can choose between daylight, natural, or warm white.

The TAIYALOO bulbs are rated for 30,000 hours of use. That’s almost 3 ½ years of continuous operation. Put another way, if you used your microwave for an hour a day, the bulb would last for over 82 years! 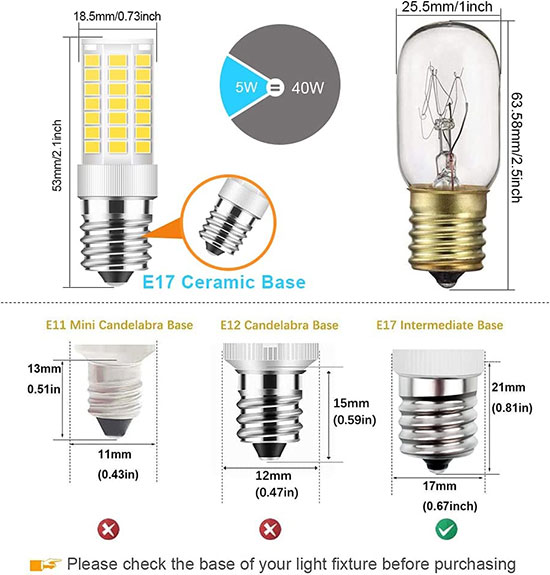 These bulbs are also dimmable, which isn’t the case for all LED bulbs. You probably don’t care about that for your microwave bulb. But if you want to use your second bulb in a small dimmer lamp, you can.

Then again, this is an E17 bulb. If you’re using a smaller lamp or candelabra, there’s a good chance it takes a smaller E12 base. If that’s what you’re really looking for, check out our list of the best E12 dimmable candelabra bulbs. 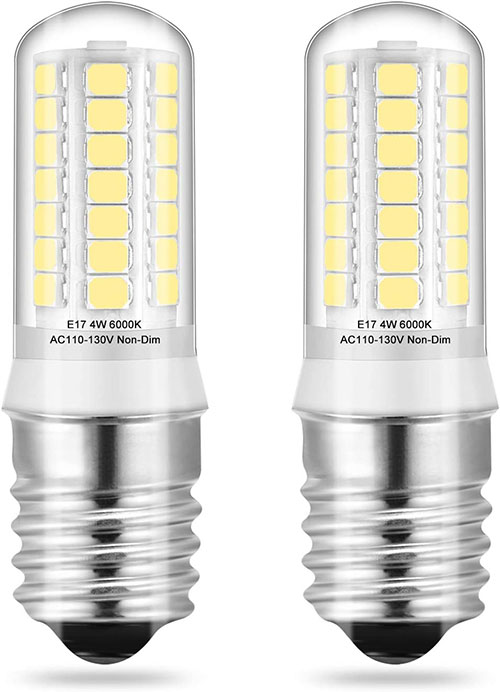 The KLGlamp 4W E17 LED Bulbs have a more traditional, barrel-shaped design. They’re also noticeably more compact, with a diameter of only 0.59-inch. While the outer PVC shells are round, the inner ballasts are actually hexagonal, with diodes along each surface. Like the TAIYALOO bulbs, these come in a 2-pack, with a ceramic ring at the base to radiate heat. 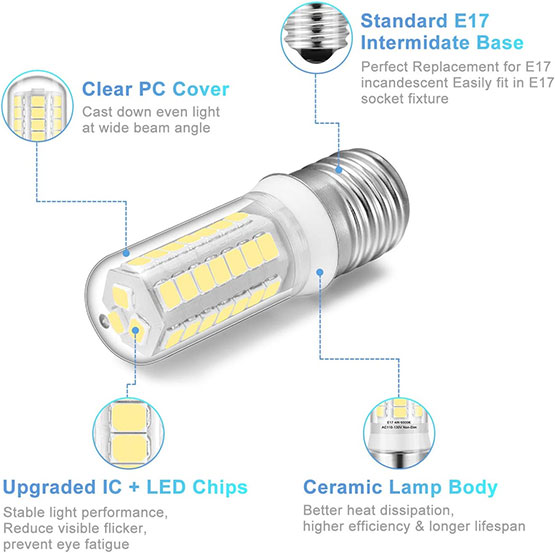 The KLGlamp bulbs are bright, if not quite as bright as the last ones. They draw 4 watts, and are equivalent to a 40-watt incandescent bulb. The 6,000K daylight white is roughly equivalent to natural sunlight, so you get great color clarity. We’re not sure how much you care about what your food looks like while you’re cooking it. But if you want a daylight bulb, you’re looking at one. 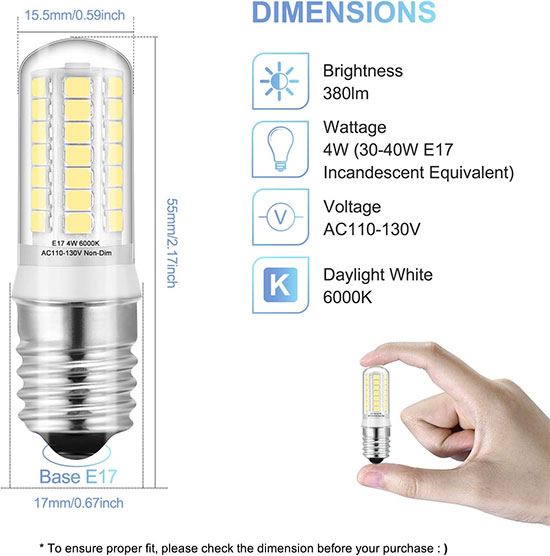 These bulbs have a lifetime rating of 30,000 hours, the same as the last ones. KLGlamp also backs them with a 12-month manufacturer’s warranty. That’s long enough to know if there are any manufacturer’s defects. 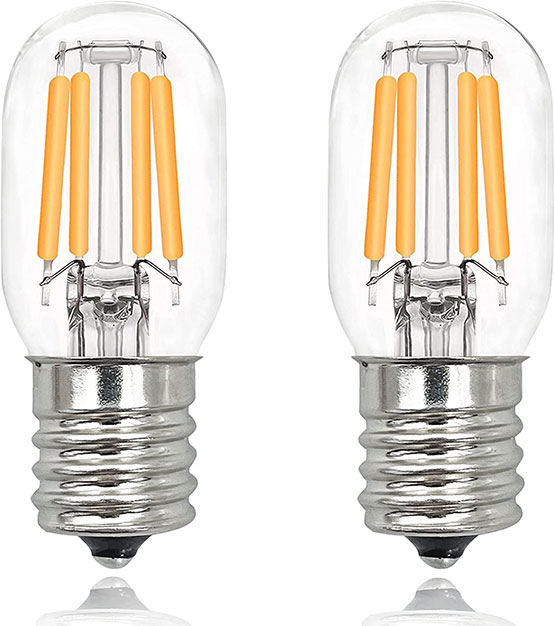 The YBEK E17 LED Bulbs have a different design altogether. They’re oval-shaped, with a rounded base and tip and a decidedly retro appeal. Instead of ordinary diodes, there are fake “filaments” that mimic the look of an incandescent bulb. They’re a bit fat, at 0.87-inch in diameter, but they should still fit just fine in your microwave. Like the others we’ve looked at, they come in a 2-pack.

These bulbs draw only 2 watts of power, which makes them incredibly efficient. They’re only as bright as a 25-watt incandescent, but that’s still enough for most microwaves. The 2,700K warm white light has a pinkish cast, which is great for evenings or early mornings. Because there’s less blue light, it won’t wake you up the same way as other whites. 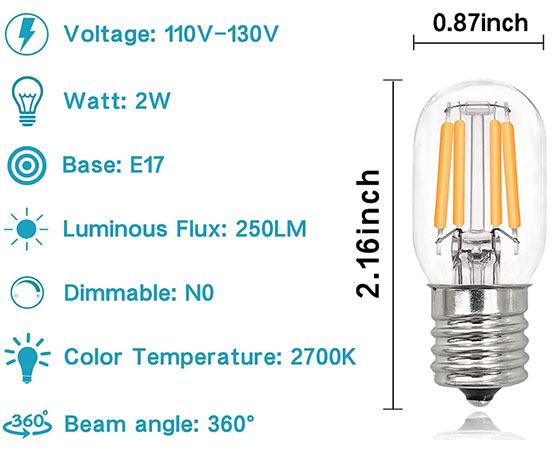 The durability rating of 20,000 hours is less than the other bulbs, but it’s still pretty substantial. You won’t have to worry about changing your microwave bulb for several years. And if anything fails prematurely, you’ll be protected by a 12-month manufacturer’s warranty.

So, what is an E17 bulb, and what makes them different from other bulbs? The “E” in “E17” is short for Edison. In Europe and North America, the Edison scale is used to measure the size of screw-base bulbs. The number, meanwhile, refers to the diameter of the bulb in millimeters. So an E17 bulb is a standard screw-base bulb with a base diameter of 17mm.

Most light fixtures use E26 bulbs in North America, or E27 in Europe. These bases are so similar that the bulbs are actually cross-compatible. E26 bulbs are used in lamps, ceiling lights, and even in LED flood lights. There’s a good chance you’ve got a few of this size bulb laying around in your closet.

On the lower end of the scale are E12 bulbs. These bulbs have the skinny bases you’ll often see in chandeliers, candelabras, and night lights. They’re often crafted to imitate the shape of a candle flame. E12 bulbs are used almost exclusively in North America. In Europe and China, E14 bulbs are used for all of the same purposes.

E17 bases fall somewhere in the middle. They can often be used for decorative purposes, much like E12 bulbs. However, this size is also standard for appliances. If you look inside your fridge, there’s a good chance it uses an E17 bulb, just like your microwave.

Before we wrap up, let’s talk about why you’d want to use LED bulbs in the first place. We’ve already talked about two of the main advantages: lifespan and durability. Even the toughest incandescent bulb can’t scratch the longevity of an LED. But there are several other reasons people are making the change. Here are a few:

So, which of these replacement E17 LED bulbs is right for your microwave oven? Let’s review what we’ve learned about them.

We began by examining the TAIYALOO 5W E17 LED Bulbs. With a 40-watt halogen bulb equivalency, they’re the brightest of the bunch. You can order them in any color temperature, and they will brightly illuminate even an oversized microwave. They also have an impressive 30,000-hour rating, and they’re dimmable to boot!

After that, we looked at the KLGlamp 4W E17 LED Bulbs. These bulbs are slightly less bright, which makes them suitable for mid-sized microwave ovens. The 6,000K color temperature is a pure daylight, and the 30,000-hour rating is robust. And the 12-month manufacturer’s warranty gave us more added confidence.

Last but not least, we reviewed the YBEK E17 LED Bulbs. These bulbs are different from the others, with faux filaments that mimic incandescent bulbs. They’re not as bright, but they’re still good enough for small- to mid-sized microwaves. And the warm white light is great for late-night snackers and early risers alike.