If you’re a 90’s kid then you probably remember growing up with a Nintendo or Super Nintendo in your home. I can’t tell you how many hours I spent as a kid playing Zelda and Super Mario World. What if I told you that you could experience all those games again, right now with just your computer or smartphone?

That’s where emulators come in. Emulators are computer programs that simulate the hardware of classic game consoles like the Nintendo or Super Nintendo. Now you can find an emulator for your favorite console and play your favorite games from way back when. Emulators allow you to not only play your favorite games from the past but also allow for things like upscaling of old textures, more stable gameplay, and the possibility of modifying games for a custom experience.

However, emulators do have one downside. Most classic games are not designed to be played on a keyboard and mouse or with a touch screen on the phone. Thankfully, there exist emulator controllers that you can use to capture the original experience of playing with the original console. These USB-connected controllers are designed like the originals and most emulators nowadays have some form of third-party controller support.

So today we’re going to take a look at some of the best NES and SNES controllers for emulators. We’re going to look at the AGPTEK Wireless Classic Controller, the Suily USB Retro Gamepad Controller, and the iNNext Retro USB Super Controller Gamepad. We’ll discuss the features of each controller then offer a comparison of the three.

Why Use an Emulator Controller?

Like we said, emulators imitate the hardware of classic game consoles on a computer or smartphone so you can play old games. But most old games were designed to be played with a very specific type of controller setup. Most of the time you can map controller inputs to a keyboard but it can feel awkward and artificial, especially for older games that rely on precise movement and platforming, like the original Mario Bros or Castlevania. So if you’re stuck playing those on a keyboard, it can be a frustrating experience. 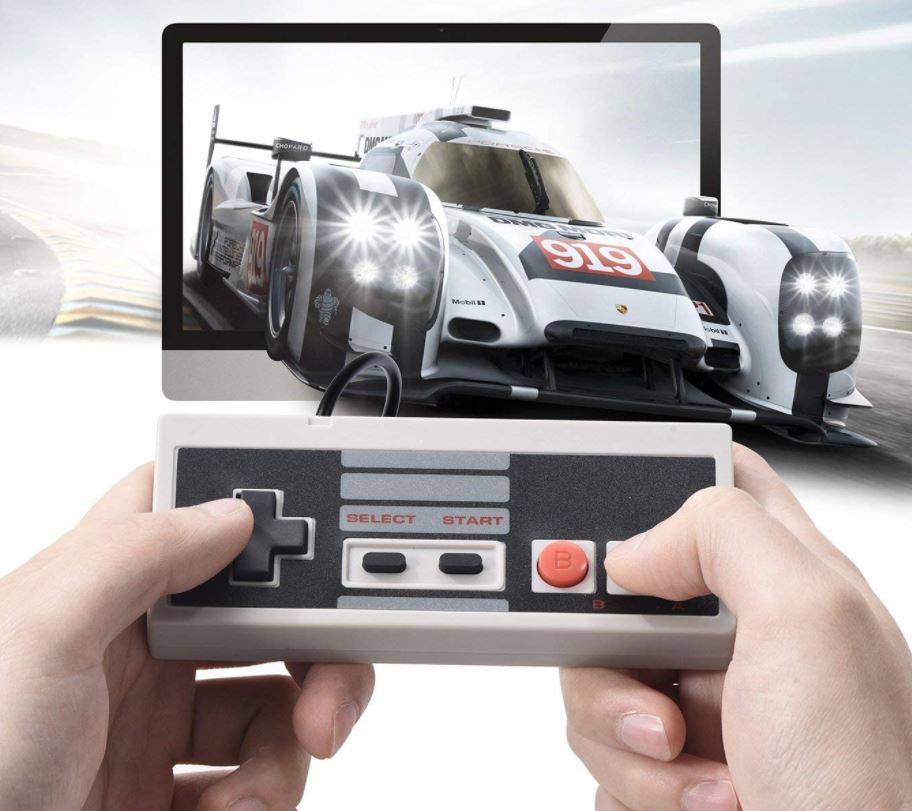 Also, a good emulator controller can often be used for general[purpose gaming on the PC. Steam, Origins, Epic, and GOG.com all have generic joypad support so you can use an emulator controller to play regular games on the PC. This dual functionality is a great feature, especially in a gaming age when developers often intentionally try to mimic the look and feel of retro video games.

So if you’re a gamer who likes classic titles, then you can benefit from having a retro USB controller on-hand. Some models are wired and others are wireless. Wireless models typically require a USB dongle attachment but some brands have Bluetooth compatible controllers. If you have a Bluetooth controller then your computer or smartphone will have to be capable of Bluetooth connectivity. 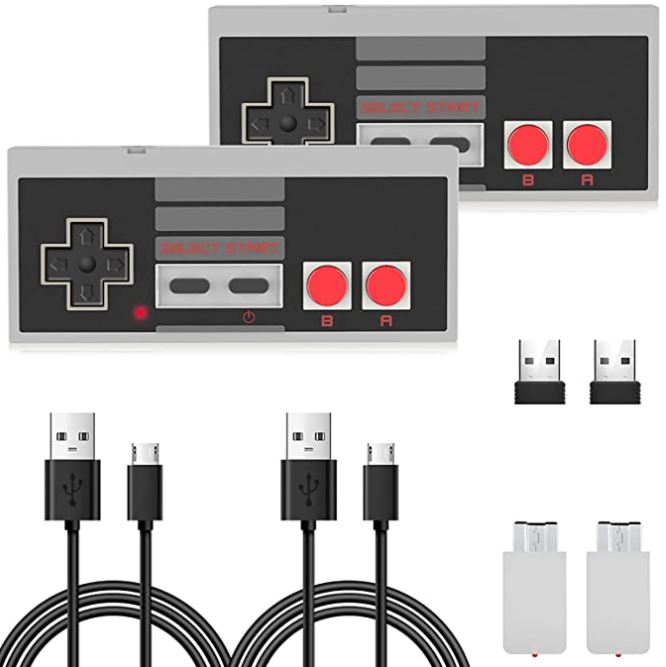 First up is a strong choice with the AGPTEK Wireless Classic Controller. As the name implies, you can play with this controller wireless but also in wired mode. The AGPTEK controllers use a micro-USB connection to charge the controller, the cord can then be replaced with a USB dongle so you can use it wirelessly. The battery takes about 4 hours to fully charge and can be used for up to 100 hours before needing to be recharged. Additionally, they have an ultra-low power design so you can use them virtually forever and never have to worry about them running out of power. Best of all, they’re designed to shut off automatically after 10 minutes of idle time, so you can’t accidentally leave them on and drain the battery. 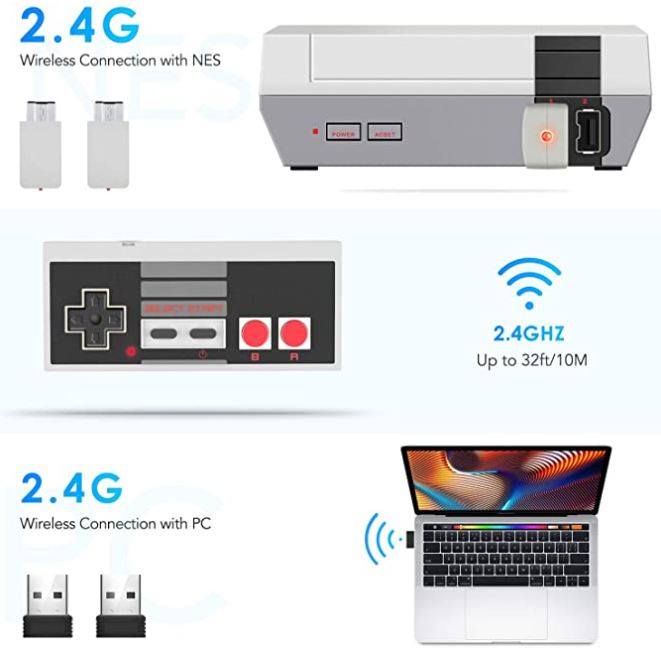 The AGPTEK controllers are designed to mimic the original controller layout of the first Nintendo, so keep in mind that your button layout will be limited. Most modern games are built on a 4-face button layout and this controller only has 2 face buttons. So you’ll only be able to play games that have two input buttons, which the original Nintendo games were designed as. The upshot is that this controller pack comes with 2 separate controllers so you can play multiplayer games. 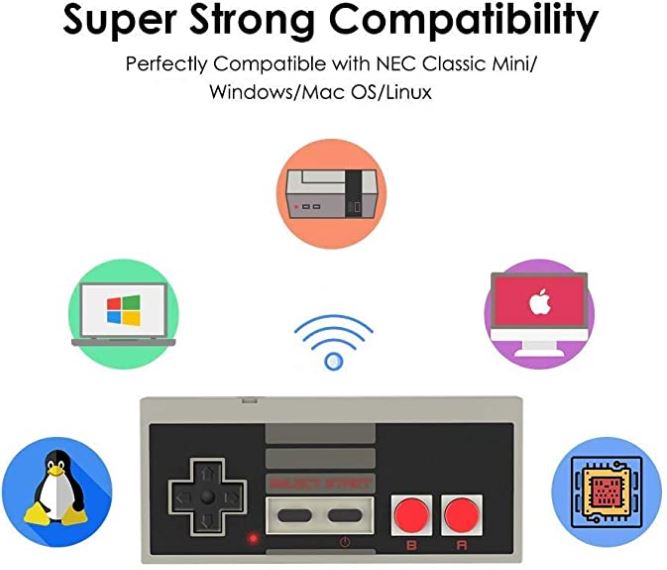 The look and feel of the controllers are great. They perfectly imitate the original mode, complete with the geometric patterns, red and black color, and comfy, rectangular design. They’ve also been slightly updated for modern ergonomics and have sturdy digital buttons and more comfortable materials. They are also very light and weigh under half a pound together.

The AGPTEK controllers can be used with a PC but they are also compatible with the Nintendo Classic console, which is a digital re-release of the original console. They come with a special wireless dongle that is compatible with the NES console. The wireless signal is a 2.4GHz that can hold a connection for up to 32 feet (10 meters). Thankfully, you don’t need to download any drivers to use these controllers as they are plug and play. Also, if you have any problems, you can contact customer support and they say that they will get back to you within 24 hours. 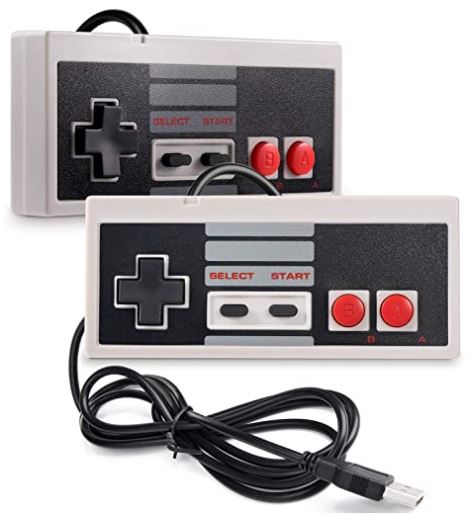 Up next on our roundup is the Suily USB Retro Gamepad Controller, another emulator controller designed to imitate the look and feel of a classic NES controller. The Suily controllers are wired, so you need to keep them connected via a USB cable when using them. Fortunately, you only need USB 2.0 or higher to use them so they are compatible with older laptops that may not have made the jump to USB 3.0 or higher. Unfortunately, the lack of any wireless capabilities means that you cannot use them with a smartphone via Bluetooth. And unlike the AGPTEK, they cannot be used with the NES Classic rerelease. However, the Suily joypad is very inexpensive and comes as a pack with 2 controllers. 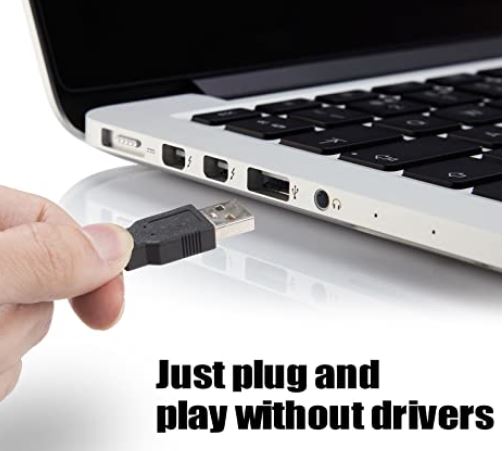 This controller is probably the most widely compatible on the list. It can be used with Win98, Vista, Windows XP, Windows 7, 8, 10, Mac OS X, REtroPie, and Linux Ubuntu. So no matter what kind of OS you use, these controllers are plug and play compatible; no driver downloads necessary. The cord is over 5 feet long so you can sit a comfortable distance away from your screen while you’re playing, or can have it plugged into your PC while your screen is extended to a full-size TV. One good thing about wired controllers is that they typically have very low latency speeds and they have faster inputs than wireless controllers. 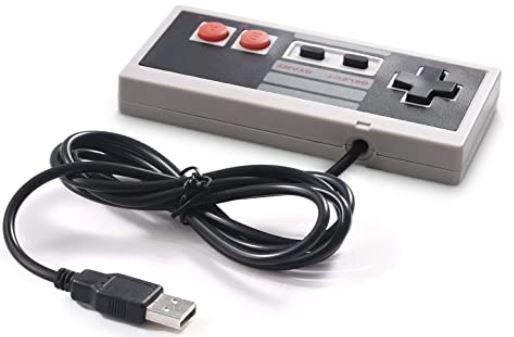 The feel of the controllers are sturdy. They’re lightweight, but the buttons are responsive, springy, and do not seem to have any dead zones. The start and select buttons are made with a durable rubber material that is a bit difficult to tell when it’s fully depressing, although that was an issue that the original NES controllers had too.

Our favorite part of them is the 5 foot long USB cable. A lot of wired controllers shoot themselves in the foot and have a 2-3 foot long cable which is very annoying when you’re trying to sit on the couch and play games. A 5-foot long cable is long enough that you have some room to sit back and relax without pulling the cord out. 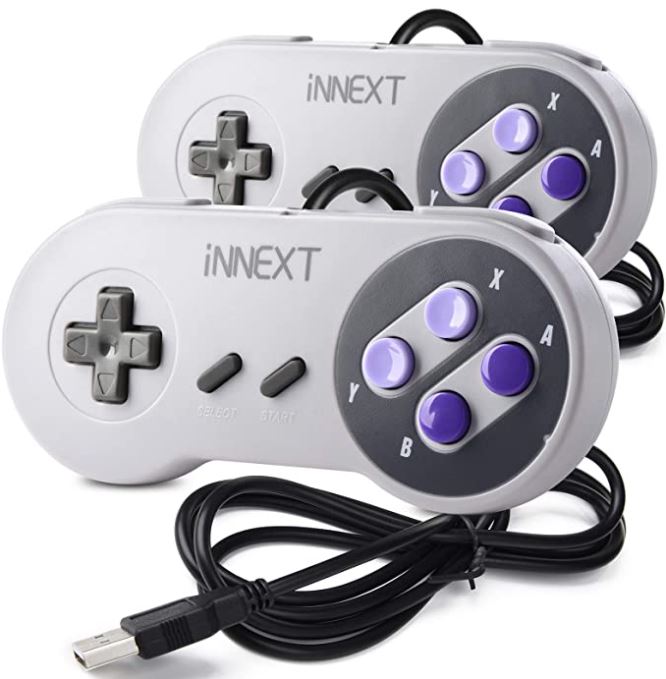 For many people, the Super Nintendo is the best console of all time, so what better way to experience your favorite games of the past with a joypad emulator designed after the original SNES controllers? The iNNEXT Retro Super Nintendo Controllers use USB-connection and are compatible with PC, Mac, Linux, and Raspberry Pi 3. They’re also compatible with a wide range of retro emulator consoles like RetroPie, Lakka, REcallbox, Happy Game Center, and ChameleonPi. The controllers are modeled after the original SNES and feature the characteristic grays, purples, and black. Best of all, they only require a USB 2.0 connection and so can be used with older computers that do not have USB 3.0 ports. 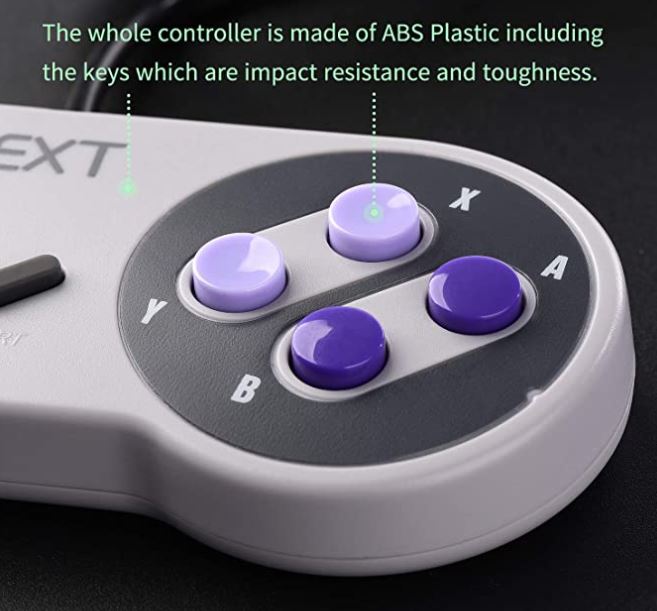 Since the iNNEXT controllers have the SNES button layout, they can be used for more games than the previous two controllers we covered on our list. Games that have a more complex button layout require more buttons but you can also go back and play older games that use just two buttons. Depending on the emulator you’re using, you can customize button layouts to fit the particular controller you’re using. Each button is made from a durable ABS plastic and has updated the original design to be more precise and reliable.

Like the Suily USB controllers, the iNNEXT controllers have a 5 foot long USB cable. This is a great feature when you want to kick back and relax with amply controller movement. There are no drivers to download so you can plug the controllers in immediately and use them without delay. Like the other controllers on this ist, they can be used as a generic gamepad for gaming on Steam or a similar client. 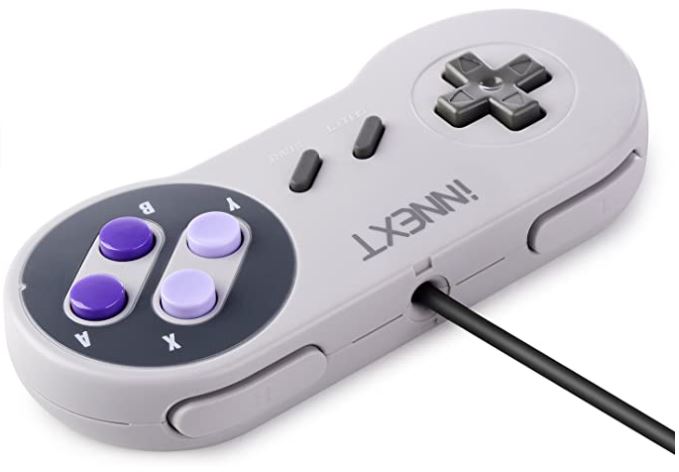 The real benefit is that they can be used for more games. You can play both NES and SNES games with the more complex button layout. The manufacturers also offer a generous 6-month replacement warranty so you can get a full replacement if there are any manufacturer errors.

So, which controller in our round-up is the best? A is always the case, the answer to that question depends on what you need.

Starting with the AGPTEK Wireless Classic Controller, these controllers are an excellent choice if you want wireless retro gaming. The wireless signal is strong and the battery lasts for a very long time. You can charge them while you play so you never really have to worry about running out of batteries. These controllers can also be used as a generic gamepad for playing PC games on a client like Steam.

The Suily Retro controllers are also a good choice because they are cheap and are wired so they have a fast response. The Suily controllers are again designed specifically for the NES so you’ll be limited in which games you can play but they are very sturdy, made out of a durable ABS plastic with heavy-duty buttons that can stand up to use.

Lastly are the iNNEXT Super Nintendo Emulator controllers. Overall, these are probably the best controllers on our lineup. They have a 5 foot long USB cord and do not require a driver installation to use. The good thing about these controllers is that they have the classic 4-button layout with shoulder buttons so you just have more options over which retro games you can play. With these, you’ll be able to play both NES and SNES games and can use the joypad to play PC games. So if you’re just looking for sheer versatility, then the iNNEXT controllers are our pick for the best emulator controllers.