Valve’s Steam Deck is the latest console to hit the market. After months of delays, it’s still quite difficult to come by and not yet widely available. Only those who were early enough to pre-order it are now the lucky ones who can have their hands on it.

That being said, the official first-party dock for the Steam Deck was also recently delayed until late Spring. And there’s good chance it’ll be delayed further. Needless to say, this is kind of a bummer. Using a dock, it lets users hook the console up to their TV or monitor to use a keyboard, mouse and other peripherals. Essentially, it enables you to use the Steam Deck as a portable entry-level gaming PC without any inhibitions.

There are several USB-C hubs that can be used as a docking station for the Steam Deck. However, most of them were created with gaming laptops in-mind. That said, some won’t include the necessary power to properly run the Steam Deck. In fact, the OEM charger that’s included uses 45w of power. Ultimately, this means that any USB-C hub you’re going to use as a dock will need to provide at least 45w via power delivery (PD). If not, your Steam Deck will be draining battery while you play and won’t work for very long.

Today we’re going to take a deep-dive and uncover the best available third-party Steam Deck docks. Each one will provide enough power and available ports for connecting a wide range of peripherals. But it’s important to note that none of the options we’re about to review actually “dock” or prop the Steam Deck upright.

We highly recommend using any of these USB-C hubs with a stand base that’s compatible with the Steam Deck. This will keep the console in a favorable upright position and the hub will take care of all the connectivity you require.

Essentially, you’re creating your very own docking station by combining the two. Also, while you’re at it, be sure to check out the best Steam Deck screen protectors that are now readily available.

Anker is a very popular brand that’s made a name for themselves over the past few years. The Anker 7-in-1 USB-C Hub is the perfect solution for the best all-around Steam Deck docking hub. With a simple, beautifully elegant appearance, it’s lightweight, portable and looks great. Best of all, it’s properly cooled and dissipates heat better than most USB-C hubs that are of similar size. Great for use in small, crammed spaces like behind your TV or inside a crowded game cabinet. 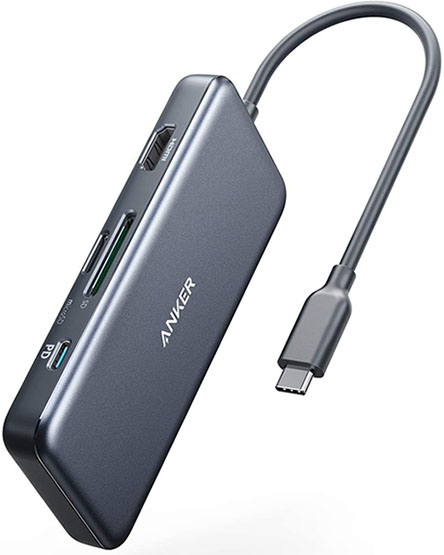 This is a 7-in-1 hub that connects via USB-C and provides plenty of power. Capable of 85w power delivery, it’s more than adequate for the 45w of PD that the Steam Deck requires. It provides a wide range of expansion with HDMI, SD/micro SD, two USB-C ports and two USB-A 3.0 ports. Essentially, you’re able to connect virtually any USB or HDMI device without any setbacks. In addition, Anker includes an impressive 18 month warranty period so you can rest assured knowing it has plenty of longevity.

As another offering from Anker, their PowerExpand 6-in-1 USB-C Hub is our pick for offering the best in portability. With a small, cylindrical-style design, it’s perfect for space-saving and easy to toss in any pocket or compartment without any added bulk. In addition, it’s built well with a nicely braided, highly durable USB-C cable. 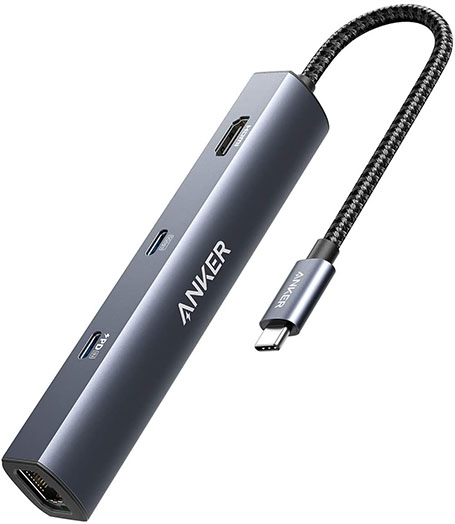 Although it has one less input than the aforementioned option, the PowerExpand hub provides its own Ethernet port. In addition, there’s an HDMI input with two USB-C and two USB-A 3.0 ports. Since there’s an Ethernet port, it lets you enjoy a wired network connection for assuring the best possible speeds when gaming online. Best of all, it’s covered by the same impressive 18-month warranty period that all Anker products have.

For those looking for a massive array of inputs, look no further than the Hiearcool USB-C Hub. Providing 11 individual inputs, it can connect your Steam Deck to virtually any external display or peripheral you can think of. On one side there’s a USB-C input that’s capable of 100w power delivery; more than adequate for the Steam Deck. Next to that is two HDMI inputs and a card reader that supports multiple formats. On the opposite end of the USB-C cable, there’s an Ethernet port in addition to an old-school VGA port. Around the last side are three USB-A ports; two for USB 2.0 and two for USB 3.0. 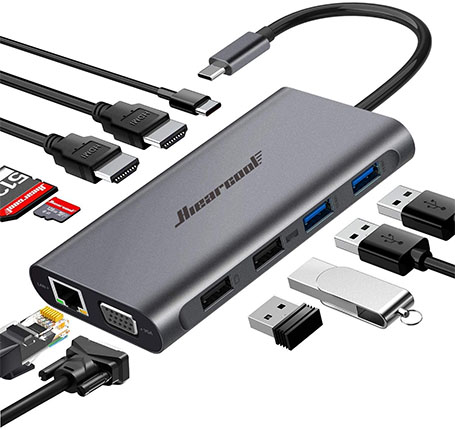 Internally, there’s a lot going on. Hiearcool included several solutions to combat any sort of failure to the inner components. In fact, it utilizes a LC9823 display chip with a dual-core VL817 chip. These promote lower power consumption, quicker heat dissipation and higher data transfer efficiency. And with it’s aluminum alloy design, it cools naturally while properly dissipating the heat in an external manner.All in all, this is a well-built, albeit slightly bulkier alternative to any of the Anker options we initially discussed.

For those working with a tight budget, rest assured, the QGeeM 4-in-1 USB-C hub provides the barebones requirements for docking the Steam Deck. On one end you have the built-in USB-C cable with an HDMI input on the opposite end. On the side is a USB 2.0 and USB 3.0 port right next to the USB-C input for up to 100w of power delivery; more than enough for powering the Steam Deck. While it doesn’t provide the wealth or expansion as other options, it’s well-built and inexpensive. 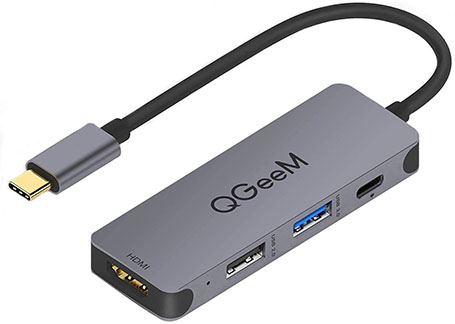 The QGeeM USB-C hub is comprised of the same aluminum alloy material as all of the other options. However, you’re getting a significant amount of savings by limiting the number of expansion ports that it offers. Although there’s no added bells and whistles or even an included warranty, it’s affordable and easy to justify the cost regardless of your budget.

CableCreation is a very reputable brand that’s been around for well over a decade. Their 7-in-1 USB-C Hub is the perfect solution for a relatively inexpensive, well-built alternative to any of the other docks we’ve already reviewed. Available in either black or space gray aluminum, you’re able to get one that perfectly matches the dark appearance of your Steam Deck. 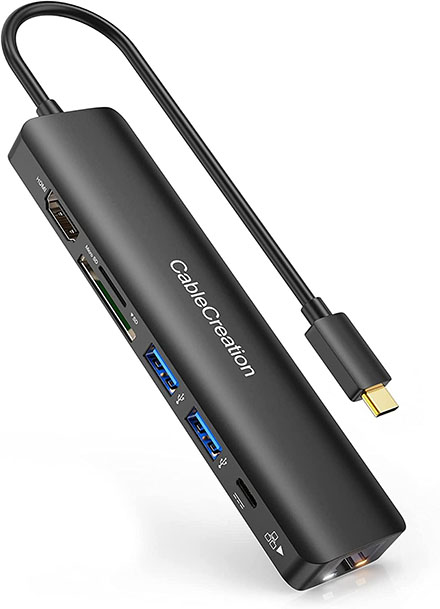 On one side is an HDMI port that’s directly next to an SD/Micro SD input. Moving on, there’s also two USB-A 3.0 ports next to the USB-C input that’s capable of providing up to 100w of power delivery; more than enough for the Steam Deck’s 45w requirement. On the end that’s opposite to the built-in USB-C cable is an Ethernet port. Holding the CableCreation hub in your hand, it screams of high-quality engineering. It’s compact but also well-built in every regard. The device feels solid and durable and incredibly versatile. Best of all, it’s quite affordable, too. While not exactly the least expensive of today’s offerings, it’s priced fairly and usually available at a slight discount.

If you’re looking for something a little different, the INVZI Docking Station is definitely the most discreet. Rather than sitting visibly on your desktop, the INVZI has two prongs that fold down for plugging directly into a power outlet. This keeps all the inputs/ports out of sight and near the wall for a visibly clutter-free gaming space. At first glance, it looks like a large phone charger, but there’s much more to it than that. 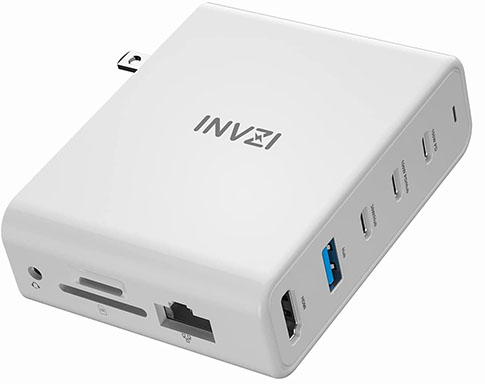 This is a 9-in-1 USB-C hub that provides three USB-C PD ports, a single USB 3.0 input and an HDMI output. On the other side is an Ethernet port positioned directly next to an SD/Micro SD card reader and auxiliary audio jack. In addition, INVZI provides four different adapters for US, UK, AU and EU plug-types. Unfortunately, it’s a bit on the expensive side, retailing for over $120 at the time of writing this.

Nowadays, most people use the term docking station and hub interchangeably. However, the difference between the two isn’t quite as clear. Typically, hubs let you connect more devices to your PC while docking stations completely transform any laptop or portable computer into a fully-working desktop unit. Most hubs will now allow you to use them to “dock” your device and connect monitors or simply a keyboard and mouse.

Why Do I Need a Steam Deck Dock?

Will a Dock Affect Performance?

In general, no, docking your Steam Deck will not affect the performance in a negative way. Although, arguably, it does improve gameplay by letting gamers use a full sized keyboard and mouse. However, unlike the Nintendo Switch, the graphical and overall performance of the Steam Deck is not altered in any way when you connect it to a docking station USB-C hub.

Can You Connect External Storage with a Dock?

A major benefit to using a dock with the Steam Deck is that it enables an easy way to expand storage. By connecting a SSD or SD card, you can expand your console’s storage capacity without needing to physically alter the internal SSD that’s built into the unit. This way, you can move your game library to an external storage device and take it with you on the go.

Which Steam Deck USB-C Dock Should You Pick?

With so many widely available USB-C hubs that you can use as a docking station for the Steam Deck, which one should you pick? Ultimately, it’s up to you to decide which one offers the best arrangement for your scenario.

Our favorite of the bunch is the Anker 7-in-1 USB-C Hub. It’s a beautifully streamlined dock that’s ideal for those who want a well-made hub with a decent amount of ports, at a fair price. In many ways, it’s similar to Anker’s other offering; the PowerExpand 6-in-1 USB-C Hub, which is even smaller but slightly more expensive.

If you’re looking for the most amount of expandability, we reccomend the Hiearcool USB-C Hub. Offering an 11-in-1 design, you’re able to connect virtually anything you have in mind. In fact, it’ll even support a triple monitor display!

For those who are on a budget who don’t want to spend a lot, look no further than the QGeeM 4-in-1 USB-C. It’s small and inexpensive, but doesn’t offer quite the same amount of expandability as any of the other options.

Alternatively, the CableCreation 7-in-1 USB-C Hub offers a lot to love. As our pick for best alternative, it’s well-made by a reputable manufacturer. Essentially, you’re assured a well-made piece of equipment by picking a top brand such as CableCreation.

Last but certainly not least, the INVZI Docking Station offers the most discreet way to dock the Steam Deck. Although it’s the most expensive on our list, it plugs directly into the wall, so you won’t have to deal with the visible clutter most hubs often create.