If you’re concerned about EMF radiation, you’re not alone. Millions of Americans do everything they can to avoid exposure. Not only that, but WiFi and mobile connections are easily hacked or monitored. Hence the healthy market for EMF-blocking smartphone pouches and patches. But protecting your phone is relatively simple. It’s a small device, and it’s usually on your person. Protecting a WiFi router, on the other hand, requires a bigger solution. To get the job done, you need a WiFi router cage.

A WiFi router cage is an enclosure designed to block the radiation coming from your router. This can keep it from permeating your house. It can also shorten the range of your WiFi network to keep out intruders, or block the signal altogether. But the thing about a router cage is that there are a lot of charlatans out there. Since most people don’t own EMF testing equipment, a lot of products on the market don’t even work. How do you know which ones are functioning, and which ones you need to avoid? To find out, we’ll need to look at a handful of different options, and see how they perform.

In that spirit, we’ll be reviewing three of the best WiFi router guards (cages) to block EMF radiation. We’ll start with the aptly-named Router Guard. This is an all-metal cage with a solid metal base and a slot in the back for your cables. Next, we’ll take a look at the JJ CARE [Upgraded] WiFi Router Cover. This is another metal cage, but with a different opening style, and a rubber gasket around the opening. Finally, we’ll examine the NewBeau WiFi Router Cover. This is a metal mesh fabric cover that flexes to cover large and irregular routers. But which one is the right choice for you? To find out, we’re going to need to look closer at each of these choices. Once we have a clear picture, we’ll give our judgement. Let’s get started!

What Does a WiFi Router Guard Do?

Before we talk about which WiFi router guard is the best, we should stop to consider what they actually do. So, how do router cages work, and why would you want one?

To begin with, let’s define EMF radiation. EMF is short for “electromagnetic field,” and it encompasses a lot of radiation types. Some of these are harmless, like radio waves and broadcast TV signals. Others are dangerous, like X-rays and microwave rays. Your WiFi router uses an EMF signal to connect to your devices, and this signal is safe for most people. This is because it’s non-ionizing radiation – unlike an X-ray, it doesn’t damage your cells. That said, some people are sensitive to normal radiation. In that case, it makes sense to cut down on even safe types of radiation. 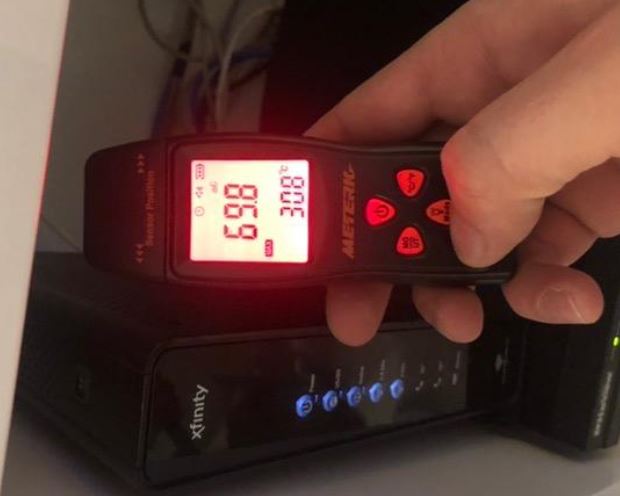 A WiFi cage is simply a Faraday cage, which is a metal structure that blocks EMF radiation. Faraday cages are used often to protect sensitive electronics, or to isolate parts of a system. If you’ve been paying attention, you might have noticed that this has an upside and a downside. The upside is that you can block radiation, and keep your network safe. The downside is that the same weaker signal also affects you. You might find that your WiFi connection is slower, or even disappears altogether. Some sellers claim that their cages will block EMF radiation, but won’t affect your signal. That’s a lie. The EMF radiation is the signal.

This brings us to another possible use for a WiFi cage: intentionally killing your WiFi signal. Some ISPs require you to use in-house modems for their faster internet service. If that modem has a built-in WiFi router, it can interfere with the signal from your own router. But if you put the modem in a faraday cage, you’ll be free to use your own router without interference. You can also use a router guard to shorten your signal to keep mooching neighbors from stealing your WiFi. Then again, it normally makes more sense just to change your WiFi password. 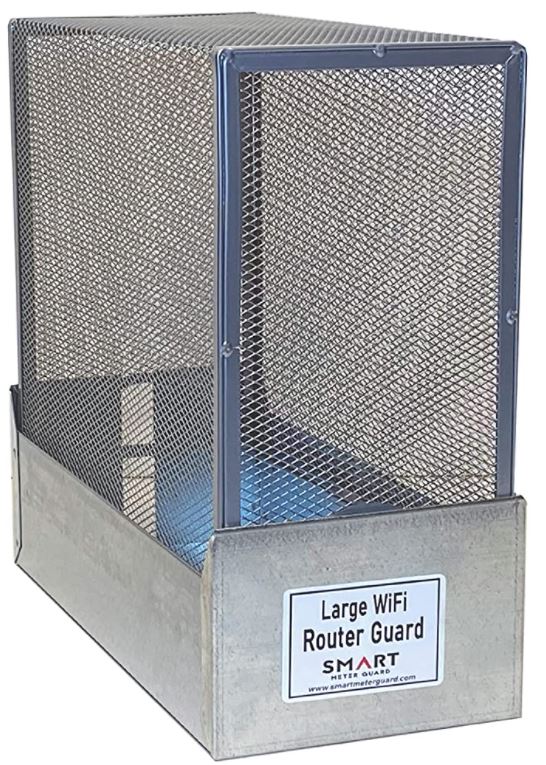 The Router Guard is exactly what it sounds like. It’s a no-nonsense cage to guard your router. The housing consists of two parts. The first is a large cage, measuring 11.87 inches high, 12 inches long, and 5.2 inches wide. This is exceptionally big, large enough to fit over even the biggest routers. If you’ve got a big, beefy router from Comcast or Xfinity, you’ll still be able to fit it inside. This cage fits over the top of your router, when then sits in a metal base that covers the bottom. In theory, you could lay it on its side, but it sits more level when it’s vertical. 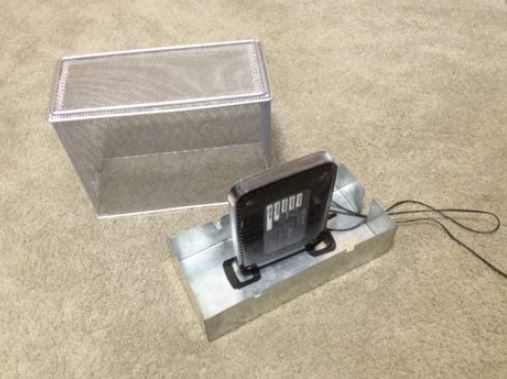 There’s a vertical slot in the back of the base, with a corresponding arch in the back of the cage top. This gives you an opening through which to pass your Coax and Ethernet cables. This allows you to still take advantage of a wired connection while blocking your WiFi signal. The only major downside of the design is that it won’t accommodate routers with antennas. It might fit a smaller single-antenna router. But if you’ve got two or more, you’ll need to remove them from your router to fit it inside. If they’re not removable, you’ll need a different enclosure. 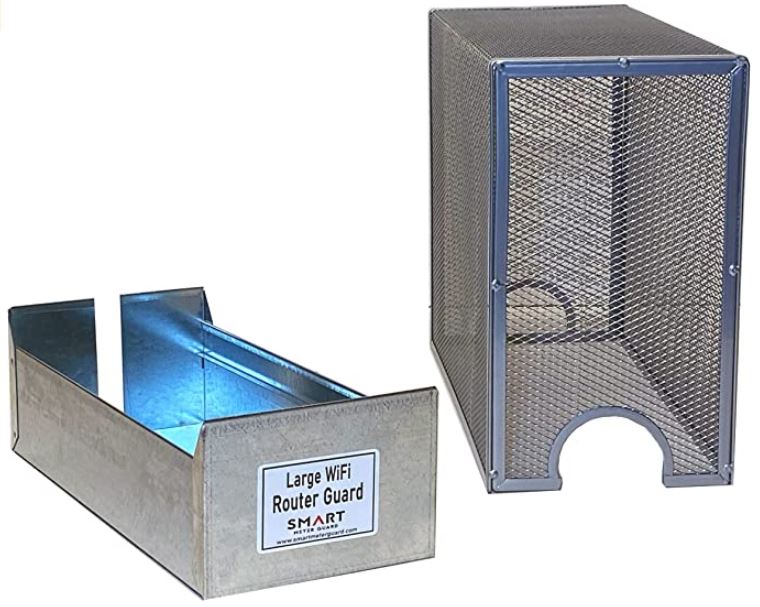 One thing we appreciated about the Router Guard is that it works as advertised. The marketing material claims that it eliminates 90% of the EMF signal from your router, and that seems accurate. With most routers, you won’t be able to get a signal outside of the room the router is in. Even there, the connection will be noticeably slower. If you’re trying to completely block a router, this is an excellent choice. 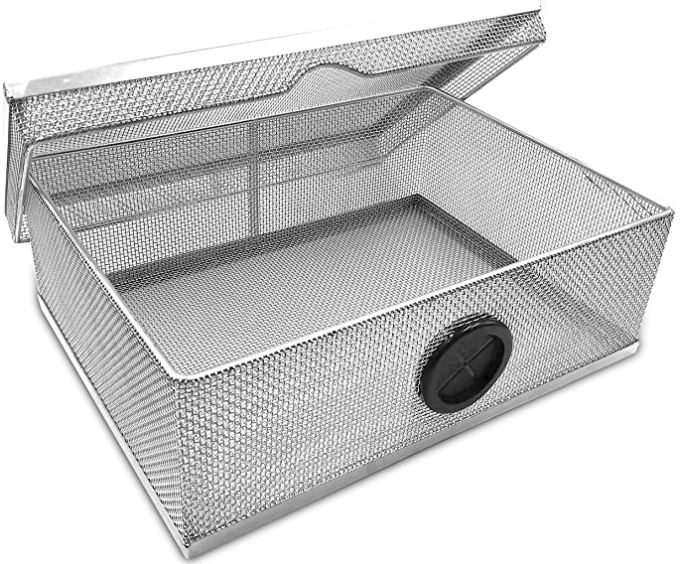 The JJ CARE [Upgraded] WiFi Router Cover is a horizontal metal cage with a basket-style design. The main body consists of a bottom and sides, which are constructed from a steel mesh. The top is constructed from a similar mesh, and sits easily over the top. The total size is 12 inches wide, 9 inches deep, and 3 inches tall. That’s enough for most routers, although not for the largest routers on the market. Make sure to measure yours first to be sure it’s going to fit. Also, this cage will only work properly with a horizontal router. It won’t stand up vertically like the Router Guard. 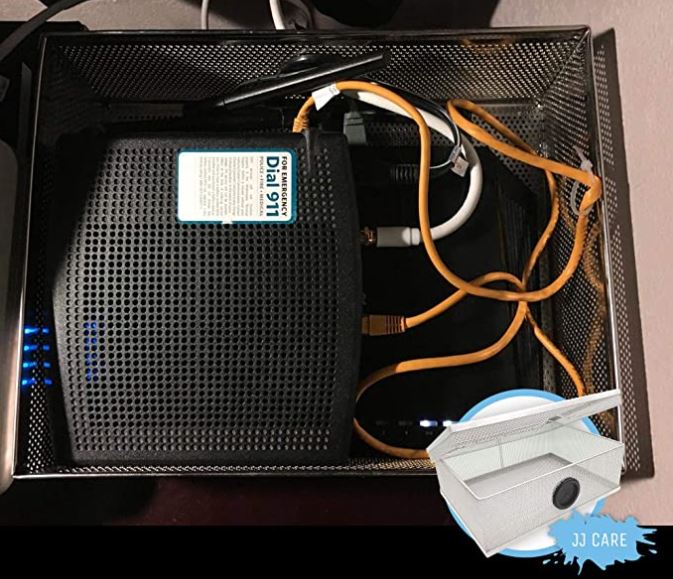 In the back of the cage, there’s a round opening, which allows your cables to enter freely. The reason this is the [Upgraded] version is that the opening is protected with a rubber gasket. This keeps your cables safe from being damaged by a hard metal rim. It’s a nice touch, and something we would have liked to have seen on the Router Guard. 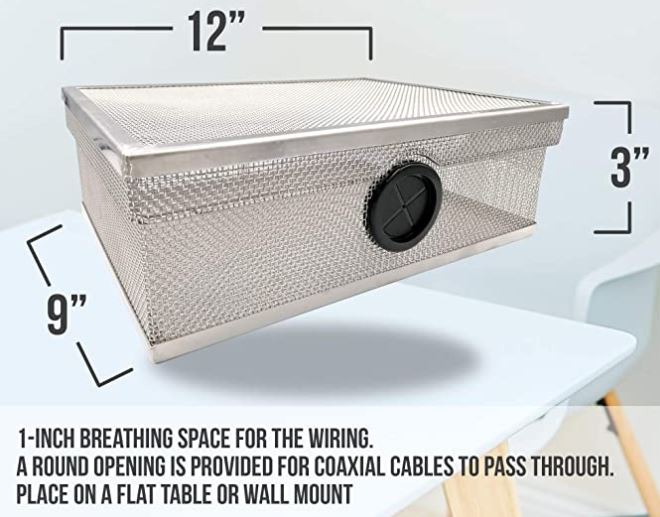 Then again, any router cage is only as good as its effectiveness. And in that regard, the JJ CARE cover falls short. As advertised, it does not affect your internet range or speed, and that’s a bad thing. This means it doesn’t actually function as a Faraday cage at all. 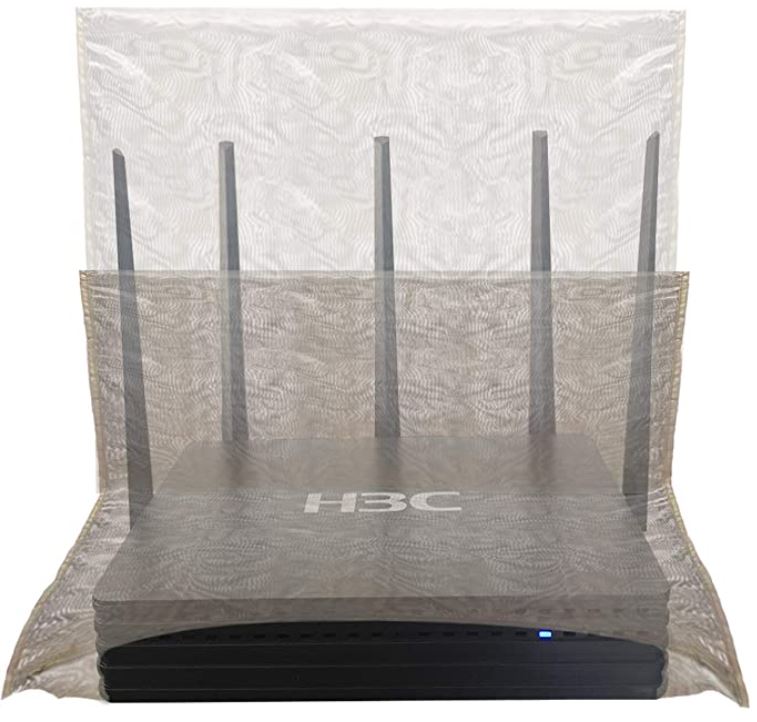 The NewBeau WiFi Router Cover isn’t so much a cage as a mesh bag. Faraday fabric is commonly used for pouches and bags, and even for use as wallpaper to shield entire rooms. And when it’s employed properly, it can be very effective. We’ve even reviewed some in the past. 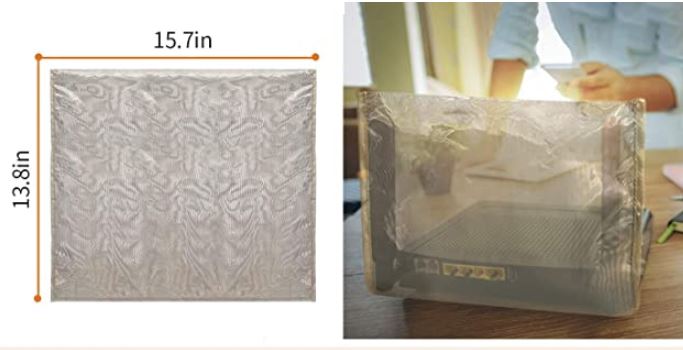 The NewBeau cover is available in two different sizes: 11.5” x 14.5”, and 13.8” x 15.7”. This makes it suitable for both small and large routers. The material is copper in color, and opens at both ends. This makes it easy to route cables, as well as to fit the cover over antennas. As a result, this cover is perfect for just about any router imaginable. That said, keep in mind the logistics of running cables through the same bag that covers your antennas. It’s not reasonable. In practice, if your router has antennas, you’ll need two covers. One will go over the router itself, leaving the back open, while the other will cover the antennas.

We found this cover to be very effective. It’s not quite as powerful as the Router Guard. But if you want to limit your WiFi range to just a few rooms, it will do the job.

So, which one of these router guards is the right choice for you? We started out by looking at the Router Guard, and it’s undeniably the most powerful of the bunch. It dramatically reduces the strength of a WiFi signal, reducing the range to a single room. If you want the most powerful possible router cage, you’ll want to go with this one.

The JJ CARE [Upgraded] WiFi Router Cover has a well thought-out design. We particularly liked the rubber gasket, which protects your cables as they enter the cage. Unfortunately, it only has a minimal impact on WiFi range, which means it’s not blocking much EMF radiation.

The NewBeau WiFi Router Cover stands out for its versatility. Because it’s a bag and not a cage, it can fit over almost any router. It can even cover routers with antennas, which traditional router cages can’t do. And because it opens at both ends, it’s easy to keep your cable organizers. To cap things off, it’s highly effective. The only real downside is that it’s not as attractive as a metal cage.