First launched in the year 2000, the PlayStation 2 is the best-selling console in the history of video games. To date, it’s sold nearly 160 million units, including over 50 million in North America. That’s three times the combined sales of the Microsoft Xbox and Nintendo GameCube, dominating the sixth-generation console market. A huge number of PlayStation 2 consoles are still in use today, and it’s easy to understand why. This is the console that brought us Grand Theft Auto III, Final Fantasy X, God of War, and Kingdom Hearts. That’s just to name a few of the classic games that came out on the PS2.

That said, we’re still talking about an old console from the year 2000. Since then, we’ve come to expect a bit more from our hardware. For one thing, modern consoles use HDMI, but the PlayStation 2 used RCA. Combined with differences in resolution, you can end up with some janky video on modern displays. That’s why a lot of PS2 owners use an HDMI converter to improve their image quality. Similarly, modern consoles use wireless controllers. If you want a wireless PlayStation 2 controller, you’ll need to buy one from a third-party seller.

A History of the PlayStation Controller

First launched in 1994, the original Sony PlayStation didn’t have any thumbsticks. This seems bizarre to modern gamers, but all the directional controls were performed with the D-pad alone. It was originally imagined that the L2 and R2 buttons would be used for a lot of these functions. For example, they were often used for steering in early PlayStation games. But this control scheme was inherently clunky if you were moving a character through three-dimensional space.

In November, 1997, PlayStation introduced the new DualShock controller, with the familiar layout we know and love. This was in part a response to the Nintendo 64, which released in 1995 and sported a thumbstick. The DualShock’s release was also timely. Earlier in 1997, Goldeneye 007 had been released for the Nintendo 64, and revolutionized first-person shooters. It was the first console shooter to allow a full range of movement, and to let your character aim up or down. This required two thumbsticks, or a thumbstick and a D-pad at a bare minimum.

The DualShock controller was actually based on an earlier optional controller, the Sony Dual Analog controller. The Dual Analog hadn’t sold well, and people had criticized the thumbsticks’ smooth plastic tips. Sony accepted this feedback, and the DualShock shipped with rubberized tips that are more comfortable to use. That said, there’s still a healthy aftermarket for stick covers to improve ergonomics in various ways. Another improvement over earlier PlayStation controllers is the improved triggers. They’re a bit beefier, and the handles are slightly extended for a better grip.

One thing that didn’t change is the design of the buttons. The X, O, square, and triangle buttons have been part of the PlayStation design from the beginning to today. These symbols actually have meaning! In Japanese culture, the X and O represent “no” and “yes.” This is often lost in translation in Western games, where O is typically used for cancel and X to confirm. 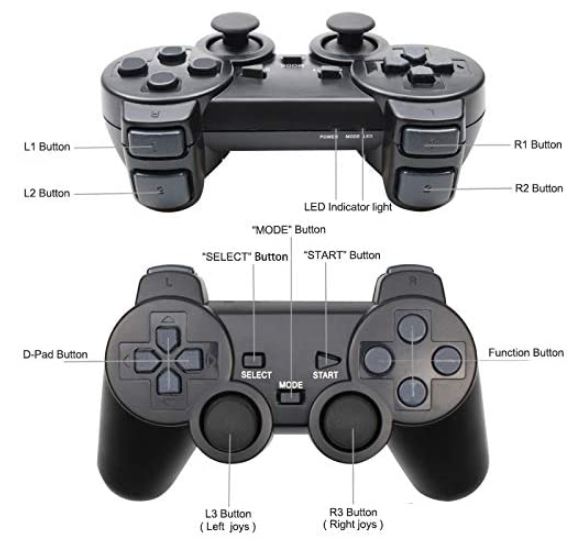 The other major improvement made in the DualShock controller was the addition of vibration. Once again, this was in response to Nintendo, whose N64 controllers could use an optional Rumble Pak for vibration. However, the DualShock controller was a marked improvement over Nintendo’s Rumble Pak. The Rumble Pak required batteries, which constantly needed to be replaced. The DualShock’s vibrating motors, meanwhile, were powered by the console itself. Not only that, but there were two motors instead of one. This allowed for superior haptic feedback to a single-motor design.

Soon, the DualShock controller was shipping with all new PlayStations, and the old controllers were phased out. Incidentally, this is why PlayStation and PS2 controllers have an analog button. It lets you play older games that don’t rely on thumbsticks.

As time went on, the DualShock continued to evolve. In the year 2000, Sony released the PS One, a slimmed down version of the original PlayStation. This one came with a revamped controller, with a new logo and color scheme. The connector was also different, to plug into the PS One’s smaller ports.

That same year, the PlayStation 2 was released with the DualShock 2 controller. There were some cosmetic changes here as well, with a new logo and a different connection. The default color option was also changed to black, rather than grey. In terms of performance, the thumbsticks were stiffened, and the buttons were pressure-sensitive. The DualShock 2 controller was the standard for the PlayStation 2’s entire lifespan. As a result, all the wireless PS2 controllers we’re looking at today have a DualShock-style design. 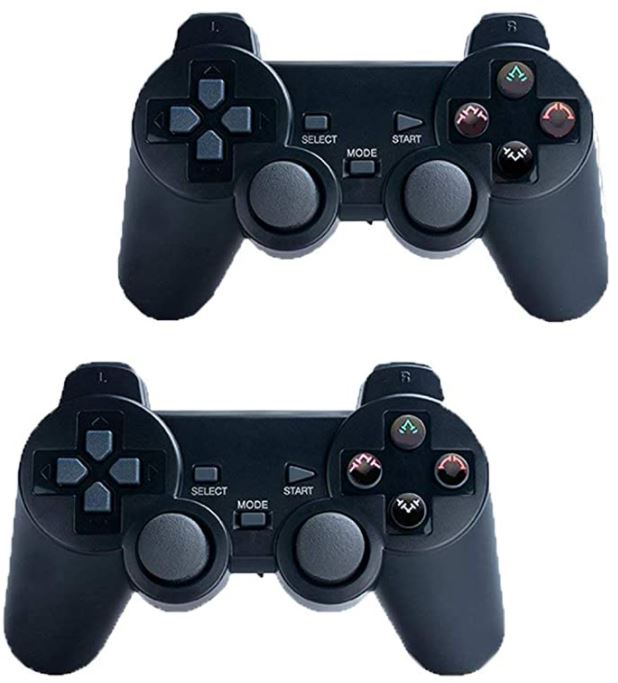 The Saloke Wireless PS2 Controller comes in a 2-pack, to replace both your PlayStation 2 controllers. This pack can come in 11 different color combinations for a variety of looks. You can go with classic black, or choose something more colorful and expressive. There are even semi-transparent options that let you see the inside workings of the controller. The buttons are responsive and located where they’re supposed to be, but they have bizarre symbols on them. There are plenty of “bare” or “stripped” controller options with no button labels whatsoever. But these symbols have no relationship to anything we’ve seen before. 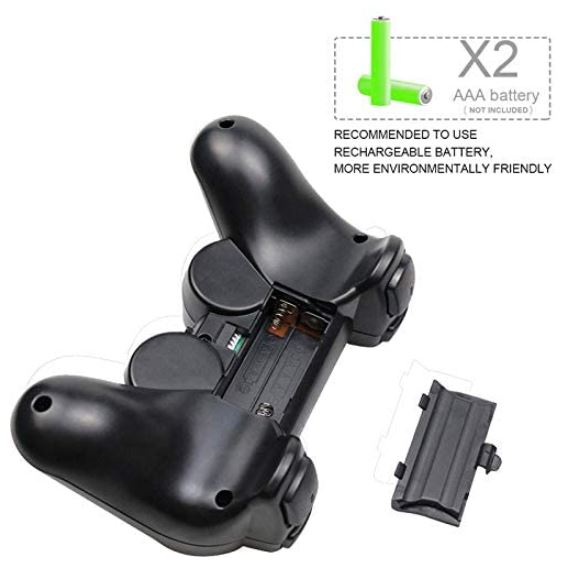 Because they’re wireless, the Saloke controllers require batteries for operation. Each controller takes a pair of AAAs, which are not included in the package. Total battery life is roughly in the neighborhood of 12 hours, on par with modern Xbox controllers. That said, battery life is highly variable, depending on what you’re doing. The more “active” your game is (the more button presses), the faster the batteries will drain. Similarly, games with a lot of vibration will also drain the batteries faster. 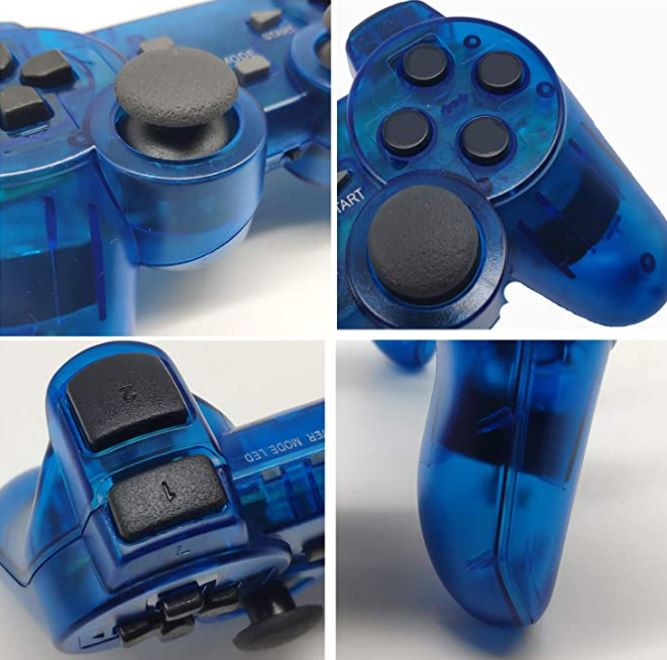 These are affordable controllers, and they don’t have the heft of the original DualShocks. That said, they still work well, with reliable thumb sticks and sensitive triggers. Just don’t drop them, and you shouldn’t have to worry about premature failure. To sweeten the pot, Saloke offers a 45-day return window. If you don’t like the controllers for any reason, you can simply send them back for a refund. 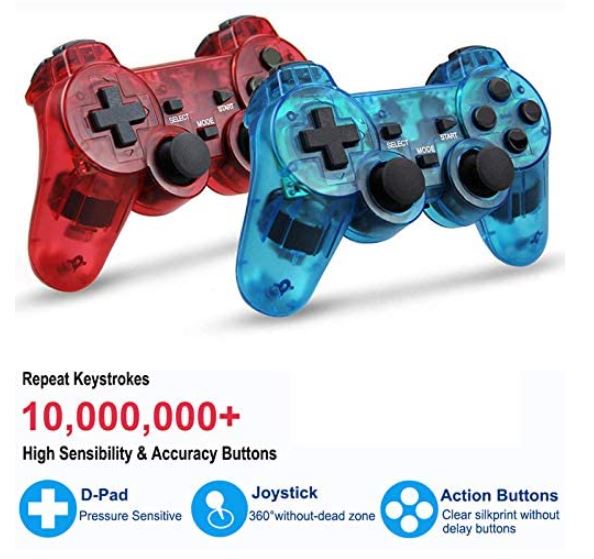 Along with the controllers themselves, you get a pair of wireless receivers in matching colors. These receivers work on a 2.4GHz band, similar to a wireless mouse or keyboard. They plug directly into the controller ports on the front of your PlayStation. Because they plug in, the receivers don’t require any batteries’ they’re powered by the PS2. That said, you might sometimes have to unplug them and plug them back in to reset them. The wireless signal can get a bit finicky, but it’s nothing a quick reset can’t fix. 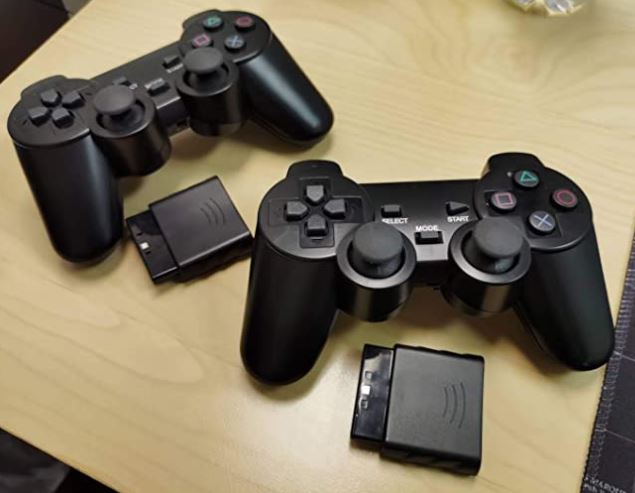 The Funcilit Wireless PS2 Controller is a bit more restrained than the Saloke. Instead of 11 colors, it comes in one: black. That said, it does come in a 2-pack, so you’re getting plenty of value. Until we tested these, we had thought of color as purely a cosmetic choice, and it usually is. However, that’s on the case here. Each one of these aftermarket controllers pairs individually with one receiver. If you get the Player One and Player Two controllers mixed up, it can be frustrating. This is easily solved by putting a mark or a piece of tape on one receiver/controller pair. Still, it’s something you should be aware of before you run into trouble. 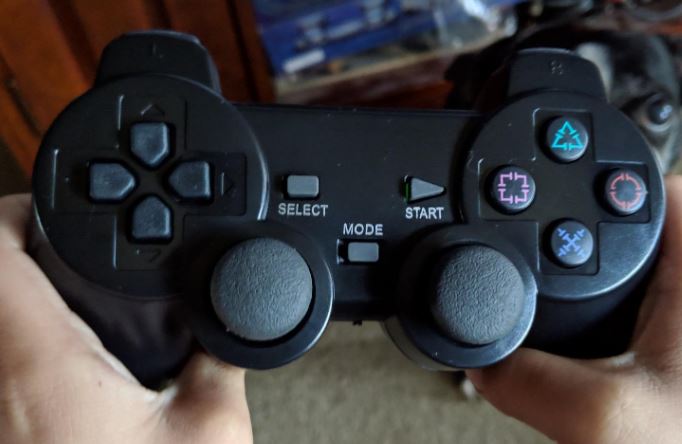 The Funcilit controllers each take a pair of AAA batteries. Like the Saloke controllers, they have decent longevity, and can run all weekend under the right circumstances. More realistically, you’ll get about 10-12 hours of juice out of each set of batteries. That’s still more than enough for a full day of gaming. 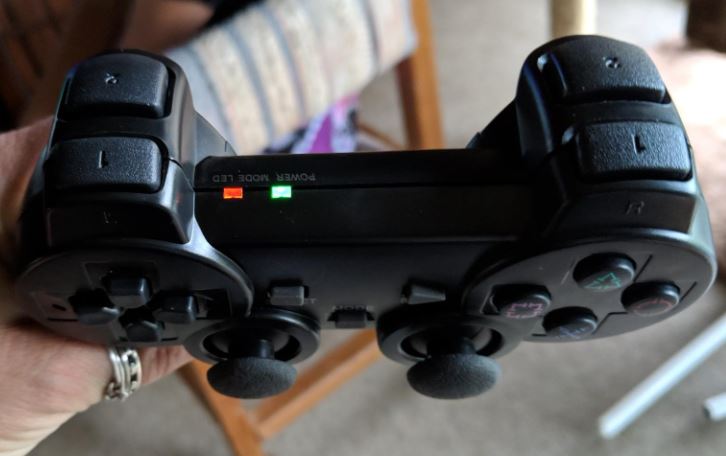 These are affordable, lightweight controllers. They work just fine, but don’t expect them to handle a ton of abuse. Drop them enough times, and they will break. You don’t have to baby them, but exercise some common sense. That said, the buttons, sticks, and triggers are all easy to use. The buttons are responsive, and the sticks move the way you expect them to. Close your eyes, and you’ll feel like you’re using a real DualShock controller. 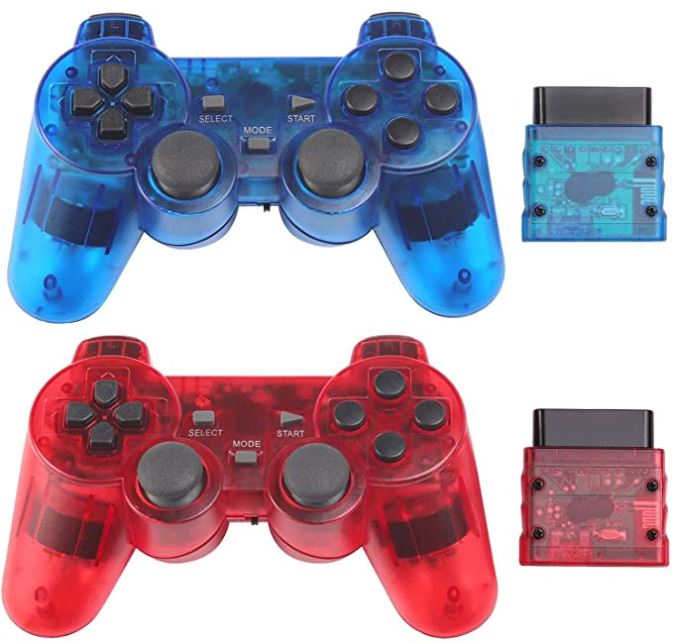 The Burcica Wireless PS2 controller comes in a 2-pack, just like our other selections. It has two different color combos: blue and red, or blue and purple, with matching 2.4GHz wireless receivers. The design is lightweight, but functional, just as you’d expect from an affordable third-party controller. As with our previous options, you’re not looking at a brick. You’re looking at a working controller that does what you expect it to. The thumbsticks are nice and stiff, and the blank buttons have a smooth feel to them. 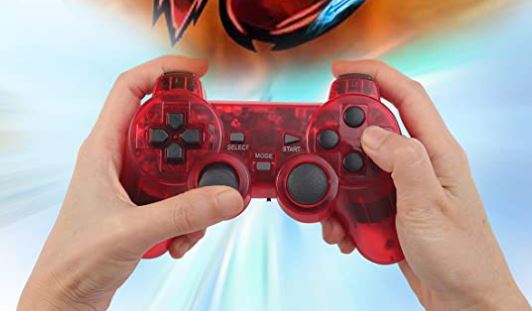 These controllers take a pair of AAA batteries, which will last all day under most conditions. As always, a lot depends on what kind of games you’re playing and how you play them. If you spend hours at a time on the pause screen, you can expect much longer battery life! 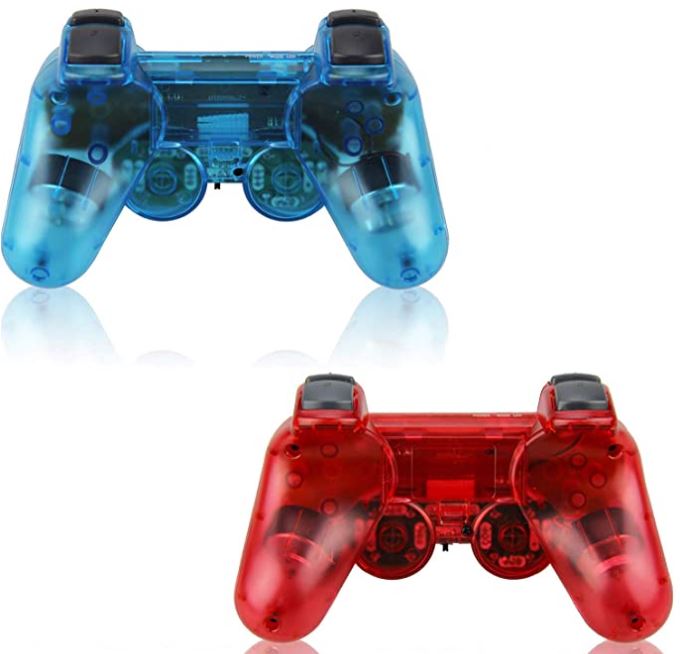 The only issue we had with the Burcica controller were some occasional connectivity issues. The controllers will automatically shut off after a period of inactivity to save battery life. Sometimes, when this happens on a game menu, the controllers won’t re-sync properly. To solve this, you’ll have to unplug the receivers and plug them back in.

So, which wireless PS2 controller should you choose? In many ways, it comes down to personal preference. All three of them perform well enough for everyday use. They’re not pro-grade, by any means, but they’re great for enjoying classic games on their original system. That said, there are a few other differences that separate the three controllers.

We started out with the Saloke Wireless PS2 Controller. This option has the most to offer in terms of color, with 11 different combinations. It’s easy to use and connect, and the battery life is reasonably long. As long as you don’t mind resetting the receivers now and then, there’s a lot to like here.

The Funcilit Wireless PS2 Controller is a bit more basic, with a plain black design. You’ll want to mark the receivers and controllers so you don’t get them mixed up. That said, the connection is very reliable, and the controllers work as you’d expect them to. They’re a great choice if you want a wireless controller that looks as much as possible like the original.

Last, we reviewed the Burcica Wireless PS2 Controller. This is similar in form and function to the previous two options. It only comes in two color choices, but the transparent design is attractive to look at. As with the Saloke controllers, there were some occasional connectivity issues. But all in all, you’re looking at a solid third-party controller.