The PlayStation 3 is one of the most popular consoles of all time. With over 87 million units sold, it sits at number eight on the list of best-selling consoles. However, of the seven consoles that have sold more units, three are PlayStation consoles. In fact, the PS3 sold fewer units than the original PlayStation, PS2, or PS4. And if – very early – sales numbers for PS5 continue to climb, the latest PlayStation may also surpass the PS3. As a result, the PS3 occupies an odd place in the pantheon of game consoles. On the one hand, it was exceedingly popular. On the other hand, it’s the least-played of all of Sony’s consoles.

All of this means that replacement PS3 parts can be harder to find than those for other PlayStation systems. But harder to find is a long way from impossible. There are plenty of options on the market, provided you know where to look. There are even options to improve the PS3’s 720p resolution to 1080p. With the right Playstation HDMI upscaler, it’s an easy task. But even more important than a good picture is a functional set of controls. Considering the age of the PS3 console, it’s understandable that many people’s original controllers are no longer functioning.

When the original PlayStation launched in 1994, it shipped without many thumbsticks. Many people don’t remember this, but it actually relied only on the D-pad! This was similar to the Super Nintendo and Sega Saturn, which were the competing consoles of the day. The R2 and L2 triggers were actually an improvement on those other consoles’ controllers. And, in the very early days, they were used for steering in 3D games.

But a mere year later, in 1995, Nintendo would shake up the home console market with the N64. The N64 controller sported a thumbstick for 3D gaming, the first home controller to do so. Initially, people were impressed, but it wasn’t a generation-defining moment. That moment would come in 1997, when GoldenEye was released as an N64 exclusive. Prior to 1997, the shooter environment on home consoles was downright awful. Nobody had come up with a control scheme anywhere near as functional as a keyboard and mouse. But GoldenEye used the thumbstick and D-pad together to create the basic shooter control scheme we see on modern consoles.

Thankfully, Sony was ready with a response. Their Dual Analog controller was released in April of 1997, with the basic layout of the modern DualShock. However, the thumbsticks were too slippery, and the grips were too small for most people. After these early reviews, Sony retooled their design, and released the original DualShock controller in time for the holidays. It was a huge success, not just because of its dual thumbsticks, but because of its namesake dual vibrating motors. This was an improvement over the N64’s Rumble Pak, which was sold separately and required separate batteries. Fast on the heels of its early success, Sony dropped the original PlayStation controller altogether. The DualShock became the new standard, as well as the most popular standalone controller in history.

With newer versions of the PlayStation came newer versions of the controller. When the PS2 released in 2000, it came with the new and improved DualShock 2. This controller incorporated further player feedback on the original DualShock. Along with stiffer thumbsticks, it also came with pressure-sensitive buttons for better control over your games. Finally, the DualShock 2 came in black instead of grey in order to match the console housing. This color scheme would remain the standard for the PS3 and PS4 as well.

When the PlayStation 3 was originally released in 2006, it didn’t actually come with a Dual Shock controller. Instead, it shipped with the SixAxis motion-sensitive controller. The original intention was for the SixAxis to be the official controller for the life of the PS3. However, for a variety of licensing reasons, Sony was unable to incorporate the rumble controllers into the SixAxis. The result was a disappointment for fans, since you didn’t get haptic feedback. A year later, Sony solved the problem by developing the Dual Shock 3. This was a new Dual Shock controller that incorporated the motion sensing function of the SixAxis. Other than the extra functionality, and the fact that the Dual Shock 3 weighs more, the two are virtually identical. 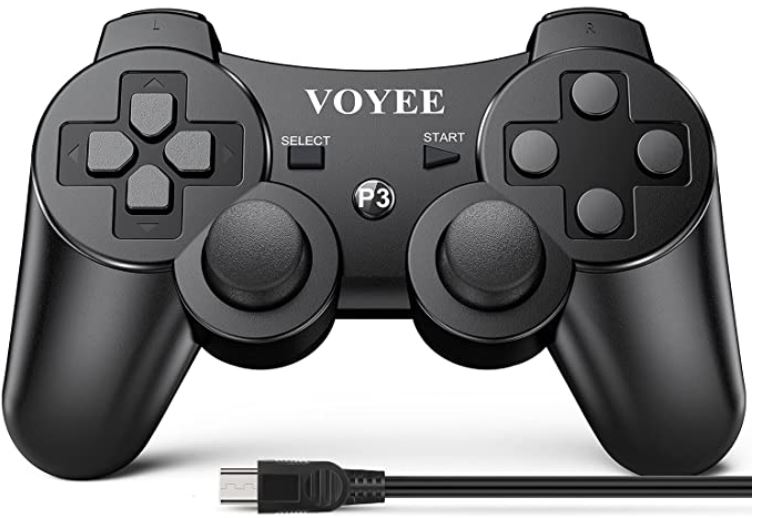 The VOYEE PS3 Controller is the first of our three options, and it’s very similar to the original DualShock 3. That said, there are a couple of notable differences. First off, the front of the controller is scooped instead of flat. This is a purely cosmetic change, but it’s noticeable, and it shaves a bit of weight off the final product. The hand grips have also been slightly extended, with molded indents near the tips. This makes the VOYEE replacement a bit easier to grip than the original, particularly if you have larger hands. It’s available in four color options: black, white, gold, or a blue and red two-pack. 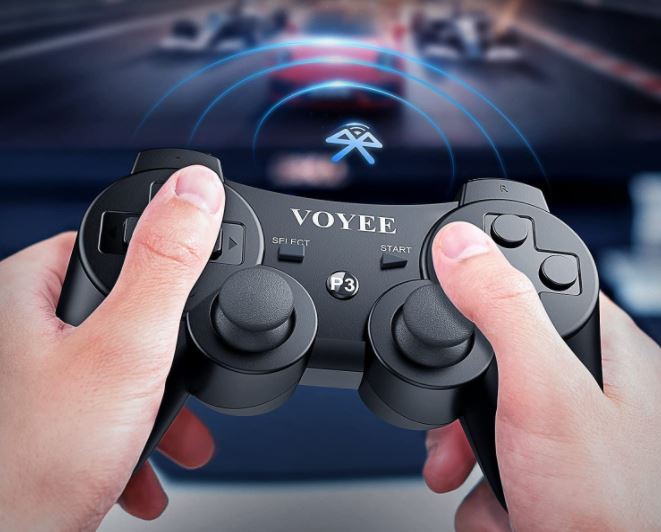 The design is reasonably sturdy, and we appreciated the construction of the buttons and sticks. The D-pad provides more response than we’d expected, as did the main buttons. It seems like the triggers are a little beefier than the original DualShock 3 as well, but it’s hard to say. The thumbsticks in particular are very well-engineered. They’re nice and stiff, with none of the slack feeling or dead zone you’ll find on many replacements. This is especially useful for shooters, or for other games that depend on high degrees of accuracy. The tops also retain the textured feel of the original PS3 thumbsticks. 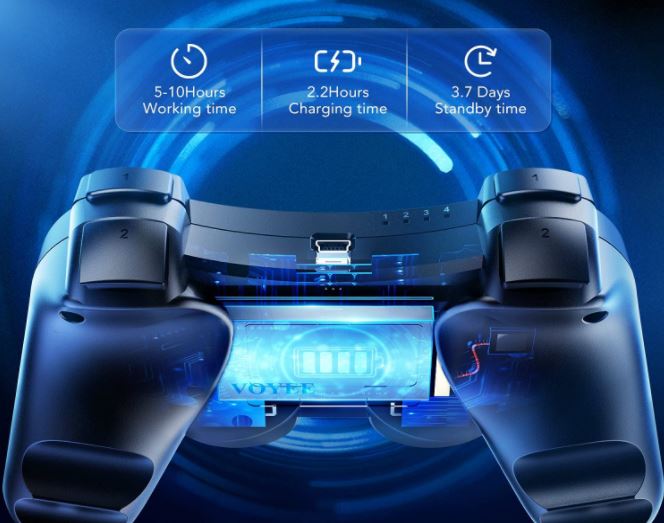 This controller sports a 450mAh internal rechargeable battery. This is a bit smaller than the original PS3 controller battery. However, there’s more to battery life than raw capacity alone. Just as important is efficient circuitry that doesn’t waste power. In that regard, the VOYEE controller performs very well. With a full charge, it can last between 5 and 10 hours, although 7 to 8 is more typical. A lot depends on the type of game you’re playing, and how much it relies on the rumble function. The battery charges in a little over two hours via Micro USB, and can be charged while you’re playing. There’s a 70-inch cable included in the kit for this purpose. Finally, the controller will power down automatically after 10 minutes of disuse, in order to save power. 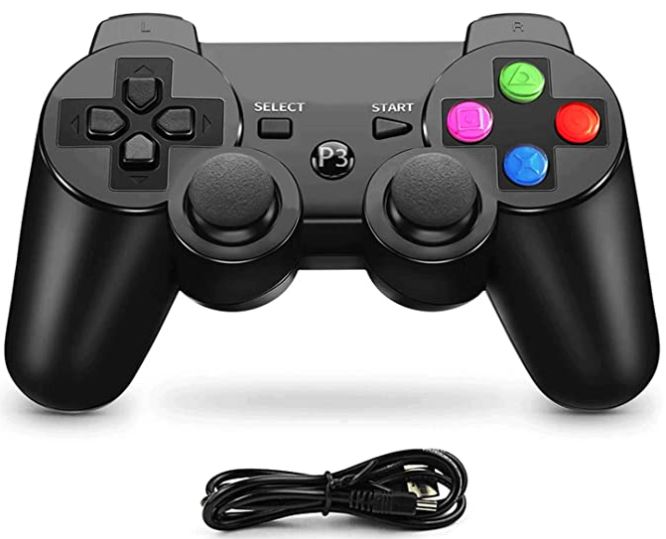 The Hangfa Wireless PS3 controller is a similar beast in several respects. For one thing, the designers didn’t shoot for a radical departure from the original DualShock 3. At first glance, in fact, the Hangfa controller looks like a near-perfect replica. However, the symbols on the buttons are altered slightly so as not to infringe on Sony’s trademark. That’s more or less universal on third-party PlayStation controllers. More notably, the entire form factor of the controller is smaller. If you’ve got small hands, you may not even notice. But if you’ve got larger hands, you may find the grips to be a bit cramped. 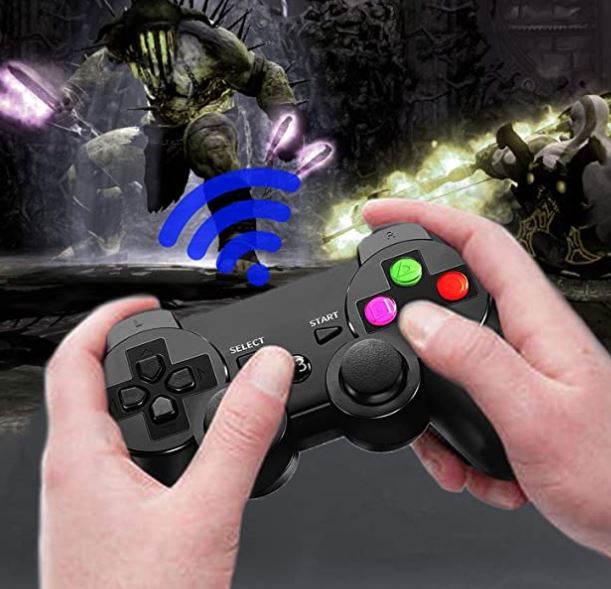 There are two cosmetic variants available. The first has ordinary black buttons. The other sports purple, green, red, and blue buttons for a bit of added flare. It’s an homage, perhaps, to the colorful buttons on the Xbox, and many gamers may appreciate the appeal. In terms of feel, both variants are basically identical. The buttons feel responsive and provide reasonably good pressure sensitivity. The thumbsticks are also acceptable, if nothing too terribly impressive. Overall, the feel is a bit lighter and less sturdy than the VOYEE controller. But if you want a smaller, lightweight controller, you’re going to be well-equipped. 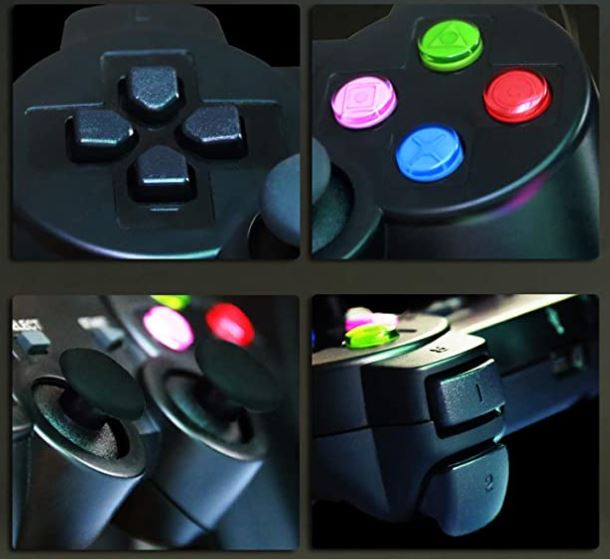 The battery charges in just over two hours via Micro USB. It can also be charged while you’re playing, by utilizing the 5-foot cable that’s included in the package. That said, battery life is a bit less than the VOYEE. You’ll get a maximum of about six hours, which could be problematic if you want to play through long sessions. On the plus side, you can pair the Hangfa controller with up to four devices without a hard reset. This allows you to easily switch between your console and your friend’s, or even to game on your PC. The controller is covered by a lifetime service warranty, as well as a 180-day money back guarantee. 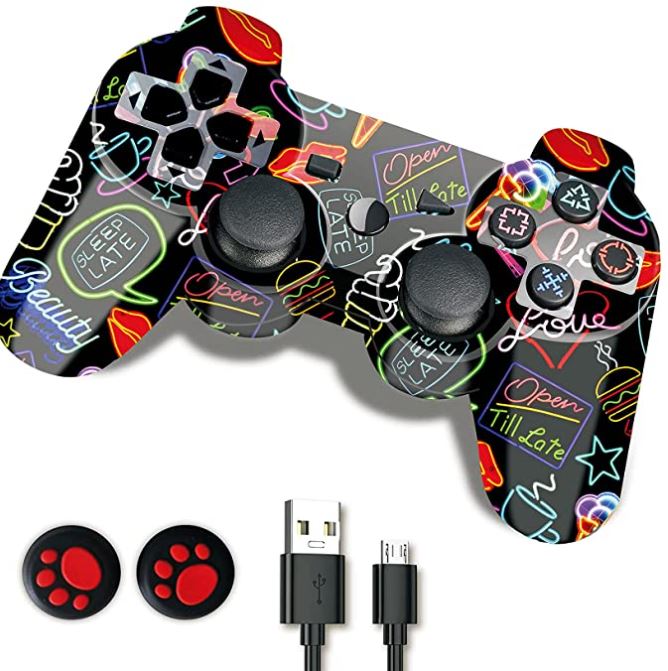 The CForward Wireless PS3 Controller is a fun-oriented design with two playful options. Both are graffiti patterns, with a green on black and red on black color scheme respectively. The profile is different from the original DualShock 3 as well. The hand grips are about the same length, but they’re flatter than they are round. Whether or not this is a good thing is really just a matter of preference. In addition, the package comes with a pair of textured thumbstick caps. These will slightly extend your sticks, improving your accuracy under certain conditions. 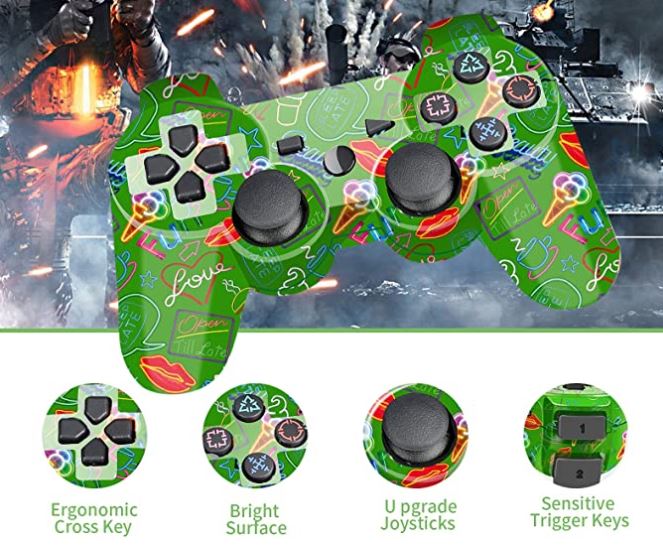 The buttons and thumbsticks are of a surprisingly high caliber, with plenty of responsiveness. The thumbsticks are nice and stiff, which provides a fine degree of control, particularly when playing first person shooters. In addition, the triggers are sensitive, and provide excellent pressure sensitivity. All in all, these parts are well-engineered, and we didn’t have any issues with sloppy control. If you want a replacement that doesn’t sacrifice quality, the CForward controller is a good choice. 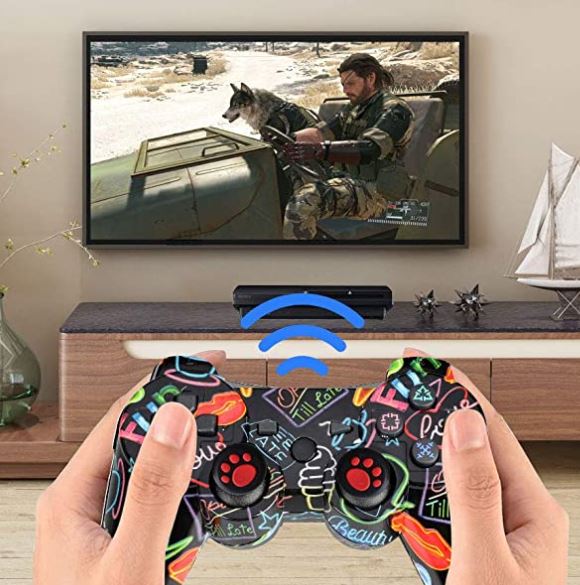 This controller battery lasts for a minimum of five hours, and can last as long as eight or nine. This largely depends on what you’re playing and how you’re playing it. Like our previous two options, it recharges via Micro USB, and can be charged while you’re playing. A Micro USB charger is included in the package. Charging takes a little over two hours.

Each of these controllers has its own unique quirks. But which one is going to be right for you? If you’re looking for a one-to-one replacement, the VOYEE PS3 Controller is your best option. It has a nearly-identical form factor, except for enhanced grips. We also appreciated the long-lasting battery, although this is largely dependent on what you’re playing. If you like the original PS3 controller, especially if you have larger hands, the VOYEE replacement is ideal.

The Hangfa Wireless PS3 Controller is a more compact option that’s better for people with smaller hands. The controls are a bit looser than our other choices, and it definitely feels less well engineered. That said, there’s an additional benefit besides the small size. It’s easy to pair with multiple devices, so it’s great for gamers with more than one system.

The CForward Wireless PS3 Controller is constructed similarly to the VOYEE in terms of quality. The buttons are all responsive, and it feels good in your hands. The playful aesthetic might not be for everybody, but it’s easy on the eyes. Beyond that, you’re looking at a slightly altered, flattened set of hand grips. If you prefer that type of form factor, you’ll appreciate this unique design.