In the tech industry, manufacturers are moving towards a once-size-fits-all approach. Microsoft wants Windows to run on desktops, laptops, and mobile devices. Google wants to do-away with operating system specific software and move towards cloud-based architecture. And, of course, vendors want to get rid of the plethora of ports on your system and replace them with a single port that can do everything.

Unfortunately, there is a catch. Hardware will never be one-size-fits-all. Mobile devices use a completely different architecture than laptops and desktops. The data transmitted to your monitor is nothing like the data you send back and forth with an external hard drive. This is where Thunderbolt 3 comes in. Thunderbolt is a protocol that governs how different hardware should talk to each other. A Thunderbolt dock is, in essence, a middle man. It facilitates communication between your peripherals and the computer. Elgato’s Thunderbolt 3 dock is supposed to be compatible with more hardware than your average USB-C dock. How does it perform? And why would you choose something like this over a more affordable model? We decided to find out.

We have a confession to make. If you were to look at our desks, you’d find them pristine. But when you look behind the monitors, you’ll find nothing but a mess of wire.

What can we say? We’ve got a lot of hardware. With all of the adapters, converters, and hubs, it’s so much easier to just shove everything where it can’t be seen instead of trying to make it look neat.

Most docs on the market are hulking pieces of plastic with cables coming out every which way. With no way to make them look good, we wouldn’t blame anyone for hiding them. But this is what separates the Elgato Thunderbolt 3 Dock from your standard dock. With an aluminum frame that matches the latest Apple computers, it has a very high end look to it. The curves are gentle, and the gap between the plastic face plate and the metal enclosure are precise. It’s something to be marveled at. In our case, it’s something that we’re proud to have on our desk.

Even though the appearance is eye catching, it still remains professional looking. The hardware looks like something you’d expect to see in a recording studio, or next to a high-end workstation. A lot of this has to do with the simplicity of the design. On the front, there is nothing to see except for a single USB-A port and a pair of 3.5mm audio jacks. In some ways, it almost looks like a computer of its own. However, you still have a plethora of connections available at the back. Here, they’re easy to access, but don’t clutter up your desk. Instead of your computer itself, this dock is now the communication hub for your entire system. In spite of that, Elgato still managed to find a way to keep it looking clean and minimalist. That’s something you don’t see all the time.

One of the most common questions asked is “will this dock work with my computer?” If you were buying a USB-C dock, that would be a legitimate question. But when you go Thunderbolt, you’re at an advantage.

One of the biggest misconceptions in the tech industry is that Thunderbolt and USB-C are one in the same. This rumor can be traced back to the days of FireWire. FireWire was an Apple-only technology. Ieee1394 was a PC only technology. In reality, ieee1394 and FireWire were the exact same thing. Apple just took the scientific-looking name and made it brandable. When Apple launched Thunderbolt 3 alongside the PCs USB-C, you might think that history is repeating itself. But in reality, Thunderbolt was developed by Intel, and is found on both PCs as well as Apple computers. 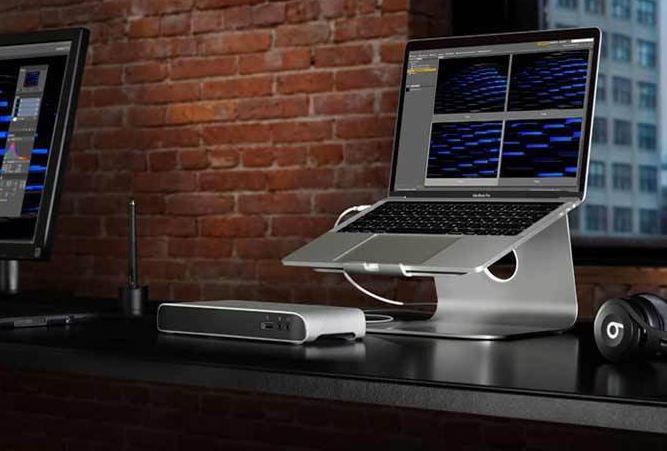 Thunderbolt is a layer on top of USB-C. It is a set of rules that govern how different parts of your computer interact with the USB-C port. You can think of it like a conversation. Speech is like the hardware, and language is the protocol. When you’re talking to somebody in English, speech enables you to communicate with one another. But if the two of you are speaking different languages, speech accomplishes nothing.

There are lots of USB-C docks on the market. Many of them work very well. But there are always going to be complications. USB-C is still a new technology, and it’s expensive to produce hardware. Many manufacturers found that if they ignore parts of the Thunderbolt protocol, they can create something that will still work for most users, and will be cheap to manufacturer. But once in a while, the language that your USB-C dock is trying to use is something that your computer doesn’t understand. Just go find any user who tried to use their Thunderbolt Superdrive with a cheap USB-C hub. That drive has a unique way of communicating, and most docks don’t support it.

When you buy a Thunderbolt Dock, you’re getting a guarantee. If your computer says “thunderbolt,” then this dock is 100% compatible. You can take advantage of every feature on it, and you’re not going to run into any unexpected issues. 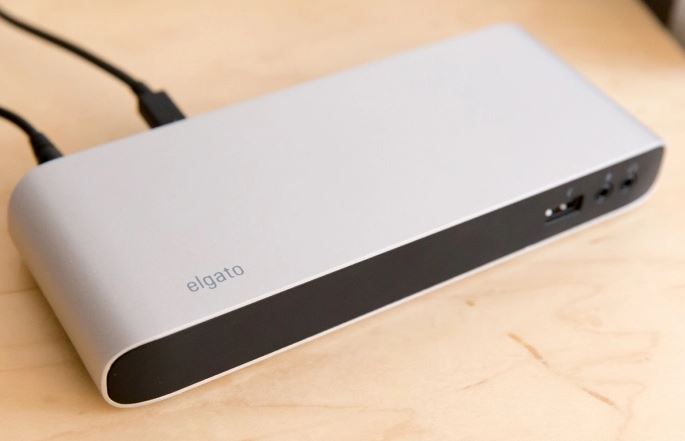 Now that we know that this dock can communicate with your computer, let’s take a look and see what protocols it supports. If you’re using one of the newer ultra-portable laptops, then power is going to be one of your main concerns. The Macbook, for example, only provides a single port. You can choose to either charge your laptop, or use your peripherals.

Elgato includes an AC adapter for the doc, so this problem is solved. No matter what you’ve got plugged into it, it will charge your computer at a rate of up to 85 watts. There are also two additional Thunderbolt compatible USB-C ports, so you can daisy chain devices like monitors or storage. 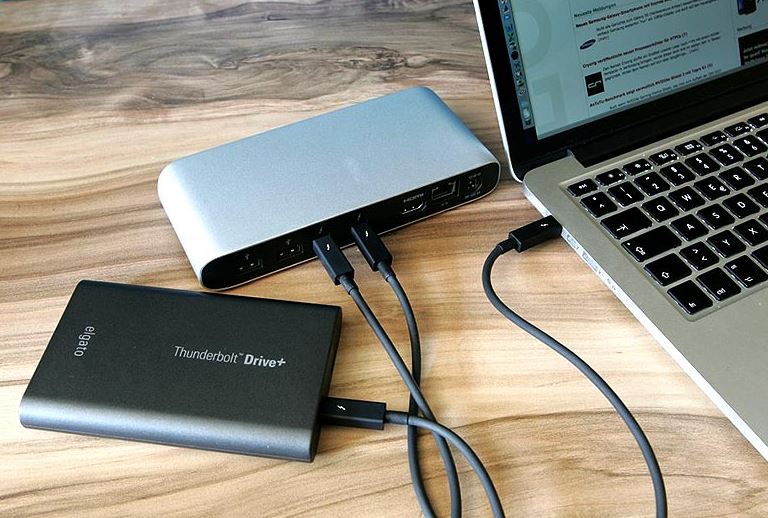 There is a pretty good chance that you have at least one device laying around that is not Thunderbolt compatible. Elgato provides you with a number of ports dedicated to one specific type of data. DisplayPort is provided for monitors, and resolutions of up to 4K are supported. The video signal can be sent over either the DisplayPort 1.2 protocol, or HDMI 1.4b. This allows you to use an adapter, and connect an HDMI monitor or television if you need to.

There are three USB 3.0 ports provided, one of which is on the front. These ports support 480 Mbps. Even though it pales in comparison to the 10Gbps of USB-C, that transfer rate is still pretty useful even with modern hardware.

Finally, there is a DAC built into the dock. This provides you with analog audio, both in and out. While this isn’t exactly a studio grade DAC, it’s perfect for using headphones or a headset. 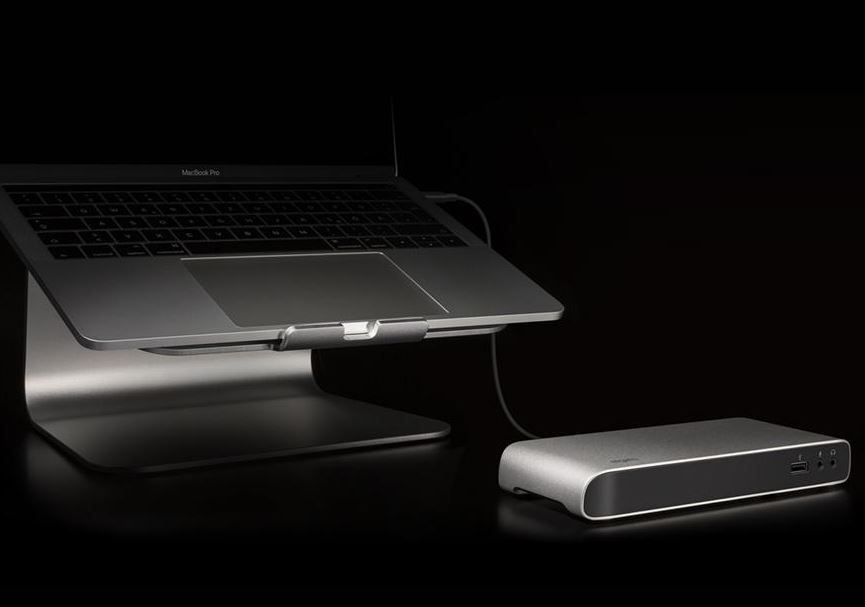 It’s hard to believe that one tiny little port can handle so much. High resolution displays, charging, audio, and even data transfer at over 10 Gbps. All of this across four tiny wires. It’s pretty advanced, and a little complex. For that reason, it’s essential that you make sure you’re getting a dock that is capable of what you’re asking of it. 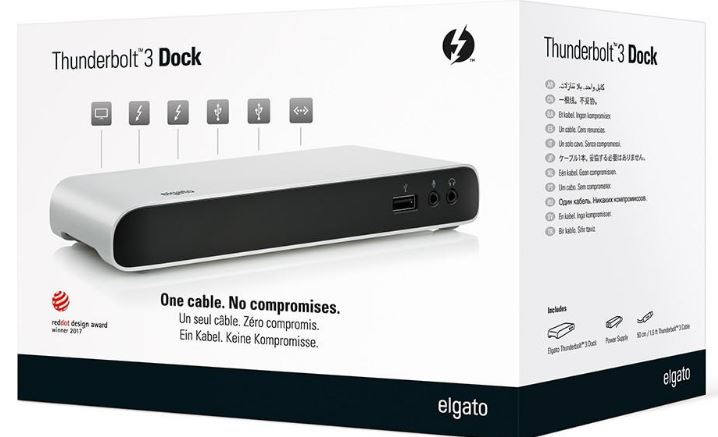 If we had to rely on any particular Thunderbolt 3 Dock, the Elgato Thunderbolt 3 Dock would be our first choice. It’s build quality is second to none, and it looks great. It has a higher capacity charger than most docks on the market, so it can even charge your Macbook Pro while running peripherals. The dock provides almost every connection supported by the Thunderbolt standard.

If you found yourself frustrated that you couldn’t plug in all of your hardware to your new laptop, this dock is the solution. You might pay a little more for it than some models, but the peace of mind knowing that it’s going to work is worth it.

Reviews of the Best Mini DisplayPort (Thunderbolt) to …
January 19, 2020