Selecting a Bluetooth earbud headphone is mostly about knowing what you expect from the device. How long will you need to make and receive calls? Will you be listening to music? How comfortable is the fit for long term use? And for people on a budget, the most important question involves the price to performance ratio.

Sometimes it makes sense to heavily invest in your listening devices. If you’re trying to get business-level call clarity for calls that are taking place on crowded streets, then you’re going to want more than a basic Bluetooth headphone. If you’re spending 10 hours a day wearing your headphone, you might want to splurge on some powerful features.

But these days, you can find fairly compelling features and performance on even the most basic, entry-level Bluetooth headphone. For only a couple of bucks, you can often end up with features and performance that were considered high-end only a handful of years ago. Even for people on a budget, it’s not that hard to find a reasonably strong Bluetooth headphone. 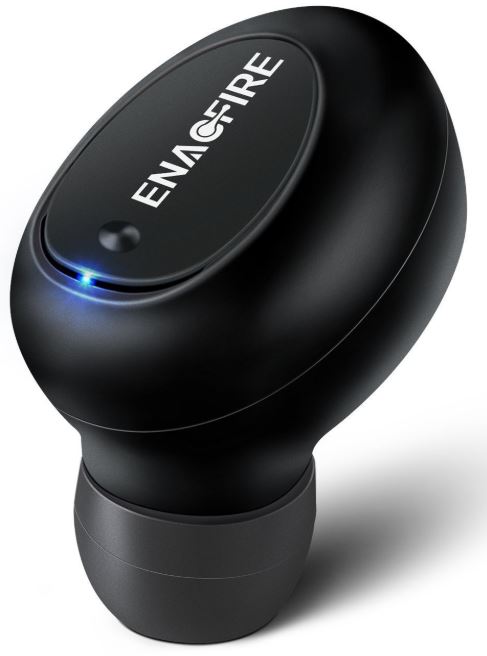 ENACFIRE’s CF8003 Bluetooth Headphone is a testament to what can be done on a small budget. Although it’s design and feature-set isn’t for everyone, it’s ubiquitous enough to attract plenty of fans. If you approach this headset with realistic expectations about the hardware you can get in this price range, then it’s easy to be impressed. For people who are making calls on the go, it’s a great way to stay wirelessly connected to the world. 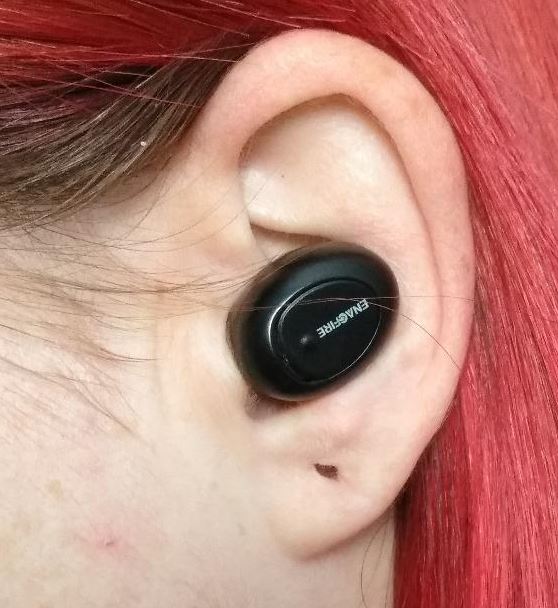 One more thing to quickly note about the design is how the end of the ear-cup provides a snug fit, which is well-equipped for keeping noise out. The rubberized design allows that fit to take place without agitating your ear in the process, which might appeal to people who don’t generally find these types of connections comfortable.

On the external face of the ENACFIRE headphone, you’ll find only one large button. One-button operation makes this device incredibly easy to work with, provided you’re not looking to do anything too elaborate. For example, tapping the button is the way you turn on/off the headphone, as well as the way you initiate play/pause. When you know exactly how many taps and when to place them, that makes operation incredibly easy. But it does mean there’s a minor learning curve, relative to a Bluetooth headphone with multiple button design. 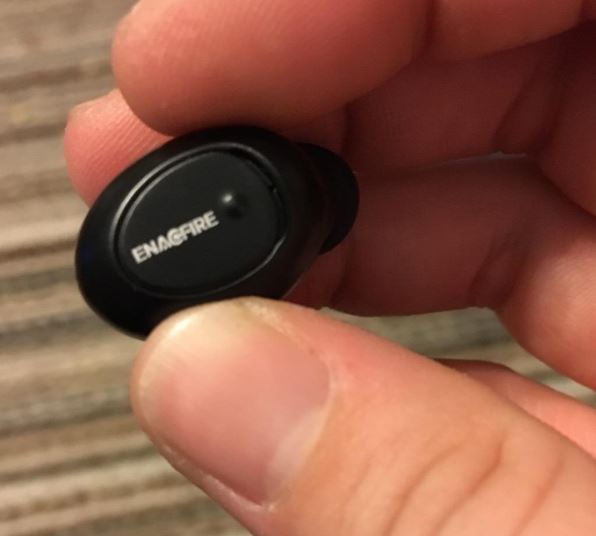 As mentioned, this headset is tiny. The small build means it device supports an equally small 55mAh battery. ENACFIRE claims that battery will last up to 8 hours of talking or 6 hours of music. They also say the battery is ready for up to 120 hours of standby time. But these battery ratings are taken under what could be called generous conditions.

It’s technically true, you can turn on this headphone for six hours of continuous play, but only when you’re using what could be called power-saving levels of volume. With the volume cranked up to more recreational levels, you can expect the lifespan to be closer to 6 hours of talking, and 4 hours of music. 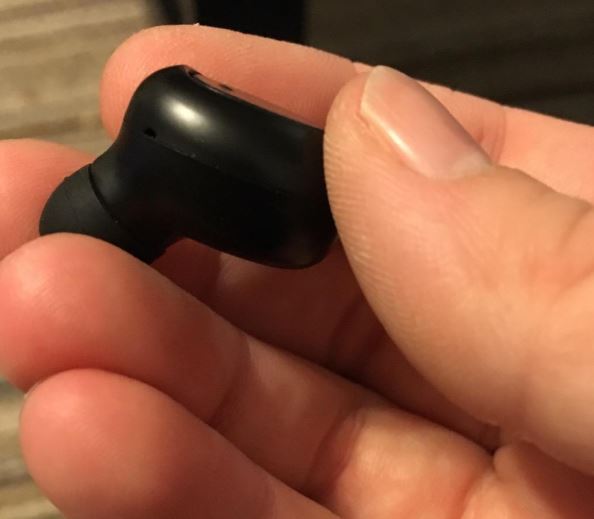 But it would be wrong to say ENACFIRE’s battery estimates are totally misleading. Thanks to the exceptionally strong noise isolation provided by its design, you won’t end up needing to crank the volume as high as you would with many types of headphones. Consequently, you won’t end up running into the kind of battery issues might ordinarily expect with a 55mAh battery.

Two more things are worth note. Apple-fans will appreciate the iOS battery display feature, letting you see remaining battery life directly from your phone. And the claimed 120-hour standby time is completely accurate, enabling this headphone to be ready to go, Monday through Friday. 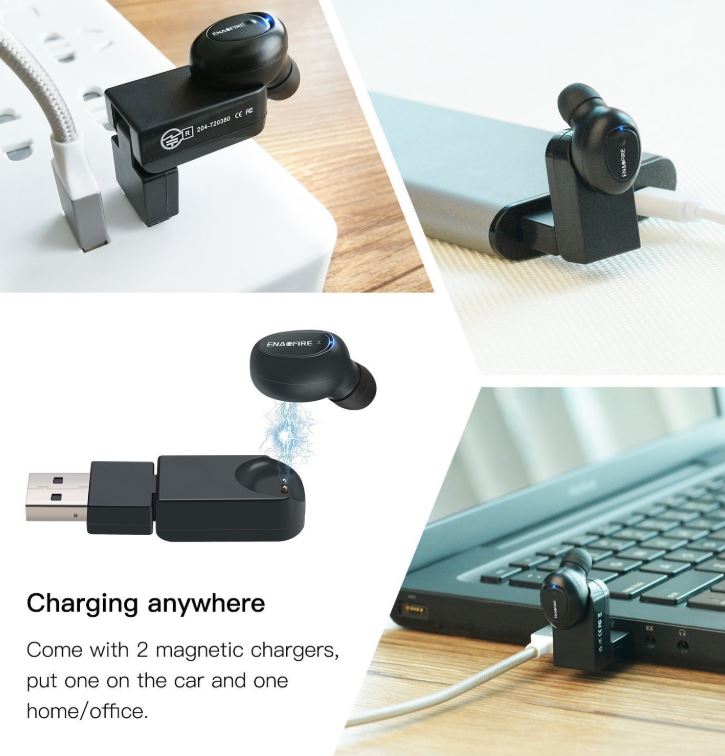 The quality of wireless audio is largely a product of Bluetooth, and virtually any modern Bluetooth headphone will use a Bluetooth 4.0 connection. ENACFIRE’s headphone is no exception, providing the same crisp quality and sturdy connection you get with nearly any Bluetooth product. In other words, these headphones sound about average for Bluetooth headphones, and given their price, that’s a good thing.

To the attentive ear, it would be safe to say this headphone actually sounds marginally better than typical Bluetooth products in this price range. That superior sound is less due to the quality of the driver being used, and more used to the strength of ENACFIRE’s noise cancellation. Suffice to say that it’s better to be able to actually hear what you’re trying to listen to.

On the microphone end of things, the CVC 6.0 digital noise reduction acts as a moderately strong cancellation feature. Although it isn’t strong enough to fully dampen the roar of vehicles while you’re standing next to a highway, it’s enough to handle the levels of noise you encounter walking around an active shopping mall. In other words, you shouldn’t have a difficult time getting clear calls as long as you don’t enter exceptionally noisy areas. 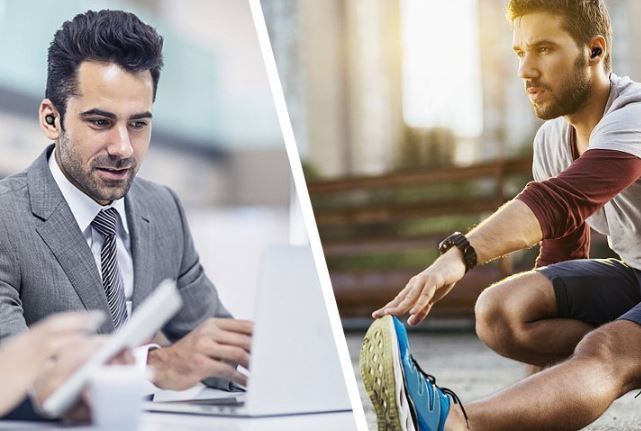 The CF8003 headphone offers what many are used to as the standard transmission distance for Bluetooth listening devices, which is roughly 33 feet. But that maximum distance isn’t something you’ll want to push on an entry-level Bluetooth headphone. The strength of your connection will begin to wear down around 15 feet.

Under most circumstances, that will never be a problem because your headphone will likely be connected to a phone that you’re carrying. That’s almost explicitly what this headphone was made to do. But it’s worth understanding that this headphone isn’t optimal for activities like watching TV in a large room. It doesn’t have that kind of flexibility.

But it does have flexibility. For instance, its Bluetooth connection can be paired between two separate devices. Thanks to the one button design, it’s easy to connect your devices and toggle between them. And you’ll have no trouble finding full compatibility with most common devices, including cameras, smartwatches, smartphones, tablets, laptops, portable game devices, and so on. 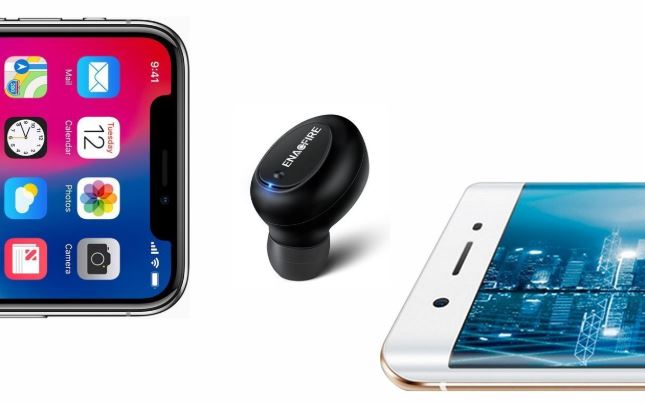 Anytime you’re physically wearing a headphone, comfort is critical. Headphones that are fantastic in fifteen different ways are can still be totally unusable if they provide discomfort. And that’s arguably the way that these headphones excel the most, they provide comfort among a type of headphones that are often perceived as uncomfortable. The first cornerstone of that comfort is the ultra-light design, which is small enough you can almost forget you’re wearing anything at all.

Another common complaint regarding the comfort of in-ear headphones is that it can feel uncomfortable to stick a probe in your ear. But ENACFIRE’s headphone uses a design where the end point of each bud is much smaller than you might expect, allowing the fit to be comfortable to unexpected levels. Even among some people who typically don’t find these types of headphones comfortable, this headphone could be an exception to their rule.

In spite of that comfortable fit, ENACFIRE’s wireless sport earbud provides a snug connection that’s firm enough for athletics. You can easily jog around and not have any concern for this headphone coming loose from your ear. The lightweight design means that even when you’re in motion, there’s not much force being applied to the device. As a result, it’s no more difficult to wear than putting in an earplug.

Included with ENACFIRE’s headphone are two ear cups, the user manual, a charging cable, and the earphone itself. The one-button operation means you can most likely take the user manual and recycle it on sight. The charging cable is a nice extra, and uses the standard USB format that ensures you’ll have no problem replacing the cord if it becomes lost or damaged. And the replacement ear-cups only add to what was an already great value, ensuring you get a comfortable fit that could potentially last for years to come.

If it hadn’t escaped your notice, ENACFIRE’s Bluetooth headphone is a mono device, meaning you only wear it on one ear. That mono design is no small part of the reason why this headphone can offer so much, yet cost so little. For people who need to stay in-touch with their surroundings, having one ear totally free is generally optimal because it means the Bluetooth headphone ear can be better sealed against sound. 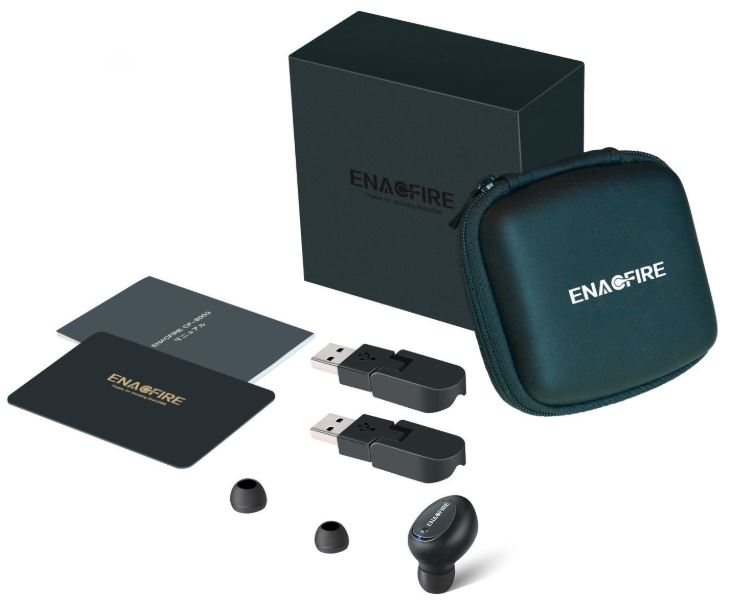 Who Should Choose the ENACFIRE CF8003 Bluetooth Headphone?

Relative to the price, this headset is incredible. The simple one-button design provides everything you need with ease. Its noise cancellation keeps the quality of your calls strong and stable, although not quite to the levels of business-quality. And the modern Bluetooth 4.1 connection keeps sound quality high and keeps this headphone versatile. Above all, it’s made to be comfortable enough to wear it all day.

But it doesn’t have the kind of insanely high end features you’ll find on much more expensive headsets. If you’re willing to spend three or four times as much, you can find a Bluetooth headphone with stronger noise cancellation features, or a longer battery life. And if you’re looking to listen to music all day long, you’ll probably want to look at stereo headphones instead of a mono-setup like this one. Even if you’re looking for music in one ear, playing music is one way that this headphone can end up rapidly revealing the true size of its battery.

But unless you’ve got a specific reason to use a top-shelf Bluetooth headphone, there’s no reason to not go simple. The ENACFIRE CF8003 Bluetooth headphone is suited for people who need a wireless headphone to receive calls for a couple of hours each day. For making and receiving calls, you’re not going to run into significant issues with the battery life. As a result, the cost to performance ratio is of this headphone is ridiculous. For a high-quality headphone at an incredibly low cost, it’s hard to think of many competitors that begin to offer similar value.