There is no shortage of portable cameras in 2017. From the longstanding compact camera, to action cams, and even spy cams, the online marketplace is awash with devices that all seem to serve the same purpose. Products like the GoPro have established themselves as market leaders by doing something that nobody else on the was doing.

There are many more action cams on the market, many of which are just as impressive as the GoPro. Heck, your Chinese-made action cam might serve you just as well as a GoPro. But without innovation, there is nothing that really drives the hype. And when a products main selling point is that it’s ‘just as good’ as a more popular solution, there isn’t really any incentive to buy.

Luckily, we had the opportunity to try out something that was both innovative and familiar at the same time. Just like the popular action cams, the FrontRow wearable lifestyle camera is designed to be in you at all times. But instead of durability, the manufacturer opted for portability. This camera is being sold as the ultimate live streaming device for the modern world. Does it live up to its hype? To find out, we decided to try it out for ourselves. 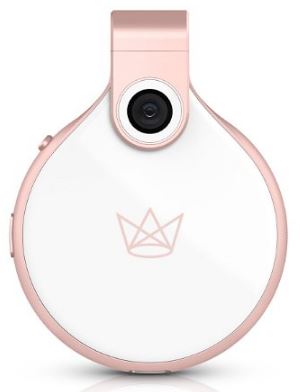 The FrontRow Camera is a sleek, modern wearable that makes it easy to capture and share every moment in your life. It functions using a simple clip mechanism. Just slide it into your shirt collar or into your front pocket and the discreet camera captures every moment in smooth 1080p, or takes 5 megapixel shots. There is a second camera mounted in the rear. This can be used while holding the camera, and captures 1080p video and 2 megapixel stills. On the back there is a large circular touchscreen that lets you access features such as live streaming. While this camera is highly compact, it does require that it’s connected to an Android or iOS device to function. Can it keep up with the popular action cams? We had to try it out for ourselves to find out. 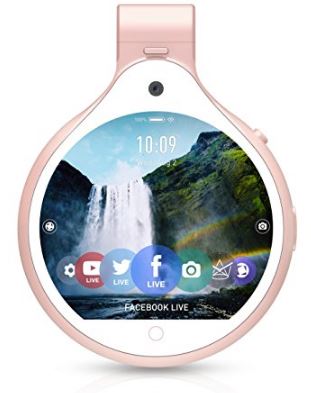 You can tell that a lot of work went into making this camera sleek and compact. Visually, it’s a bit like a combination of a smartwatch and an action cam. Like a watch, it’s got a compact, round, pendant-like appearance to it. Like an action cam, it’s easy to wear or mount wherever needed. The rear-mounted display isn’t quite edge to edge, as there is a very small bezel. That being said, it blends nicely into the rounded edges. When it’s worn around your neck, it feels very much like a large pendant. Although the large body is highly visible, the sleek plastic exterior with the stylish logo has a highly fashionable design.

You can choose from two different colors. The lighter model is a combination of a white interior with a rose gold frame, while the black model is more of a dual-tone black and gray option.

Flipping it around, you’ll find the large semi-circular touchscreen display. Just like earlier smart watches, it’s got a bit of a flat tire effect – meaning that it’s flattened off at the bottom. This space is reserved for the home button: an important navigational element. While this was a feature that we weren’t too fond of on the smart watches, the large display means that the minor loss of display real estate isn’t such a huge deal. The resolution of the display isn’t all that impressive specification wise, but in the real world it looks fantastic. The entire screen is only two inches in diameter, so you can definitely consider the display to be retina grade. This means that you aren’t able to discern any visible pixels, so the image looks incredibly smooth.

The entire unit is roughly the side of a fidget spinner, if not slightly smaller. It’s easy to hold in the hand and looks great, so we have no complaints with the visual appearance of this camera. 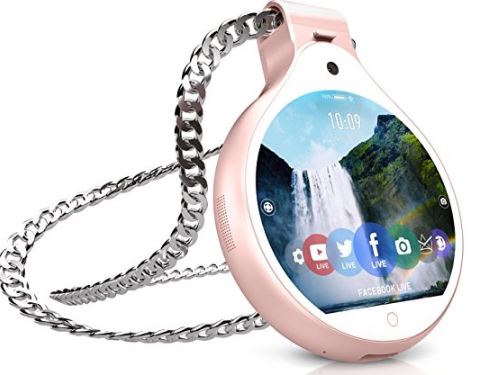 If you’re not into jewelry, wearing the camera will be a little unusual at first. It does have a bit of heft to it, so you’ll definitely notice it. With the included accessories, it’s designed to be worn as a pendant. There is a large, soft cord that slips over your necklace, leaving the camera hanging just above your chest. The cord is adjustable, which is handy when shooting video. Many females may want to keep the cord shorter to allow the pendant to hang just below the neckline. This will allow the camera to point straightforward, capturing the world in front of you.

Wearing it was very comfortable, and we got used to it quite quickly. It’s easy to quickly grab it and change the few settings you need, so you can carry on with capturing your video. If you won’t want to wear it, there are two mounting accessories available. There is a dash mount for your vehicle, as well as a little kickstand that lets you use it on a table top. 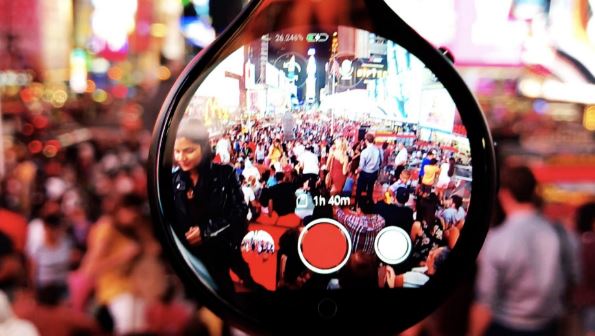 If you’ve ever used and android wear device, you’ll be instantly familiar with the interface. Instead of a background, tapping the screen brings up a real time vide feed. You can tap the screen once more to take a photo, or hit one of the buttons on the bottom to start recording video or opening a live stream. Video recording works exactly as you’d expect. Hit the button, then tap it again to stop recording. But if you swipe the record icon to the left and right, you’ll see four different options. Facebook, YouTube, and Twitter all starts a live stream through the respective services. Although there aren’t many options provided, these services are designed to be as simple to use as possible. It’s literally a one-touch system.

If you scroll all the way to the right, you’ll see a button you aren’t familiar with. “Story Mode” is FrontRow’s unique platform that allows you to capture a custom-edited video using its intelligent AI system. Story mode works by recording all the time and determining which moments are memorable. The results are surprisingly impressive. You get a nice little supercut of your day, and the video can be uploaded directly to social media with very little editing. Of course, you do miss a few moments that you may have wanted to include. But the simplicity of having a video edited for you more than makes up for any small moments that may have been missed.

One of our favorite features about story mode is that it provides you with a collection of both video and photos. The video comes together in a single long file, while the pictures are easy to organize, so you can pick and choose what you want to share.

Outside of video production, there are a few cool features that make the FrontRow camera easy to use. When you’re using the kick stand, you get a magnetic backplate. This makes it easy to mount somewhere if you want to take a long timelapse recording, or if you just want a simple hands-free way to capture all of the action. 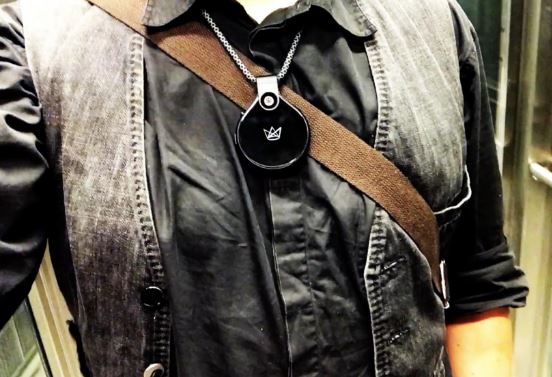 One of the reasons that the FrontRow camera feels so close to and Android device is because it actually runs a form of Android. Don’t get too excited, as the software is so stripped down that you’re not going to be able to run your favorite apps. However, this does have an advantage.

With very little resources required to run the operating system, the software is extremely fast. Getting a live stream up and running is literally fool proof. It only takes two quick taps, and the video feed starts almost instantly. Although a small part of us would love to see more Android applications on the FrontRow camera (after all, it is technically a wearable device,) we do see the appeal of a simple, responsive, easy to use device. Time after time we’ve tried out devices that felt sluggish and unpolished because the manufacturers simply tried to cram too many features into a device that wasn’t quite powerful enough to use it. This design is much simpler, but has the same level of polish that we’d expect from an Apple device. 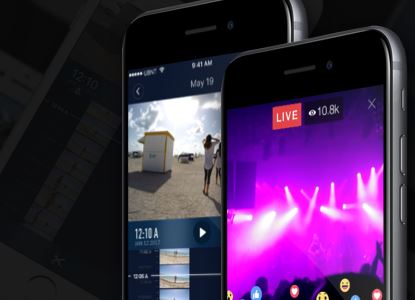 This is one of the areas where the FrontRow really excels. With so many boxy wearable cameras on the market, we expected this compact design to come at the expense of visual appearance. Luckily, no compromises were made. If you’ve used an iPhone 7, you can expect the video quality to be very much the same. Colors are rich, vibrant, and simply a joy to look at. During the day, there is almost no noise, pixilation or distortion. A lot of this has to do with the resolution. 5 megapixels is actually much more than 1080p. What the camera does is record at a higher resolution than scale down. It can compare one pixel to another and determine if the visual changes between them are a real image signal, or if they’re noise. This helps create a nice clear video.

During the day, there is lots of light for the camera to read. Almost any video camera can produce a good image in broad daylight. Where the real challenges come is at night. There is a noticeable drop in quality at night, as with any camera. But the final video still looks much better than earlier action cams, as well as competing models on the market.

Overall, the video quality isn’t going to win any awards. But it is neck and neck with the best cameras on the market. For the price, this is what we’d expect to see. 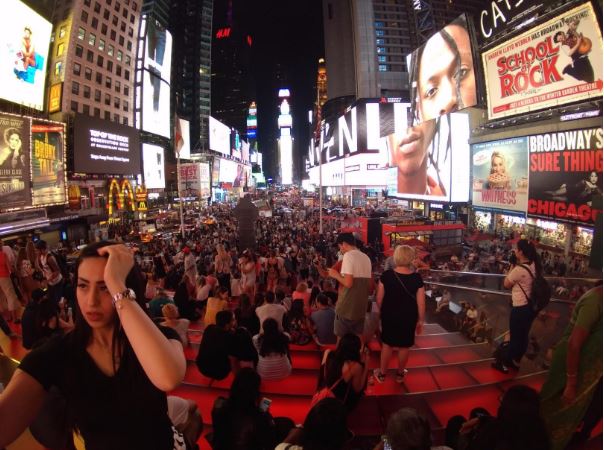 The ‘life blogging’ trend is definitely becoming more popular, but it still hasn’t taken off as much as we’d have expected. This camera is sold for a premium price, so you’ll have to be pretty sold on the concept to justify the price. That being said, you’re not going to find a better option for the money. Right now, there will be a minor drop in quality while live streaming due to limitations on the online platforms. In some ways, this means that the quality of the camera could be overkill for current standards. For consumers looking for one purchase that will last many years, this could still be a good investment. 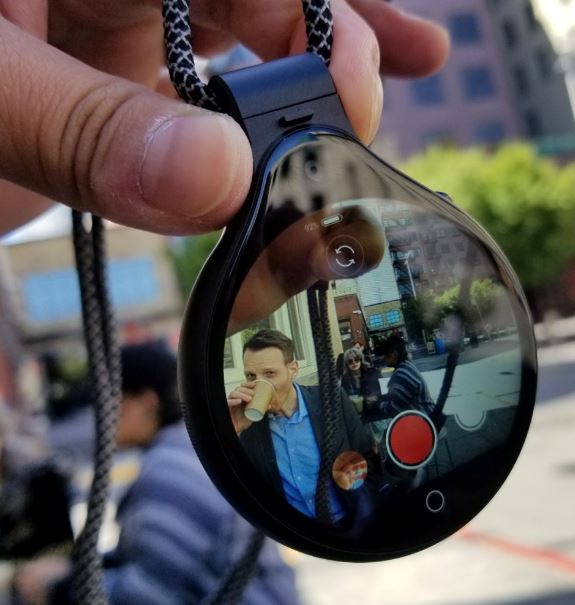 Overall, there is a lot to love about the
FrontRow Wearable Lifestyle Camera. From the stylish exterior to the high quality video, this option checks all of our boxes for what a wearable camera could be. With so many copycat products on the market, it’s extremely refreshing to see something unique. This uniqueness will show both in how you use it, as well as the video it produces. Video blogging is becoming a competitive field, and if you’re looking for something that will give you video feed an edge, this could be the solution you’re looking for.