Taking photos with your smartphone is great, provided you want to share those photos online. Beyond social media sites, just about all you can do with your digital photos is use them in a digital photo frame. When the world switched over from film to digital, something was nearly lost. There’s something special about being able to hold a physical print of a photo in your hands, and share it with someone near you. Analogue photos have never lost mass appeal, which is why everyone still knows exactly what a classic Polaroid print looks like.

But if you’re someone who values photo quality, or even someone who’s become accustomed to the high quality image of your smartphone, there’s cause for concern. Instant photo cameras are often at risk of suffering from unremarkable photo quality. That’s a consequence of too much attention being paid to the gimmick of instant film prints, and not enough attention being paid to how users are actually going to take a camera and get great shots.

The more control you can get out of a camera, the better your shots are going to come out. And when you’re using physical film, the difference between a good camera and a mediocre camera is something you can feel every time you take a shot. If you’re looking for an instant-photo camera, you’ve got to choose carefully to make sure you know exactly what you’re getting.

Instax is Fujifilm’s line of instant film cameras, the newest amongst them being the Square 6. And the freshly released Instax SQ6 is fully analog, taking your shots straight to film with each and every press of the shutter button. Since shutter control is of paramount importance to film cameras, it’s immediately worth noting the SQ6 has a finely tuned shutter button. Slight amounts of pressure aren’t going to accidentally set off the SQ6, and you won’t have to press forcefully either. 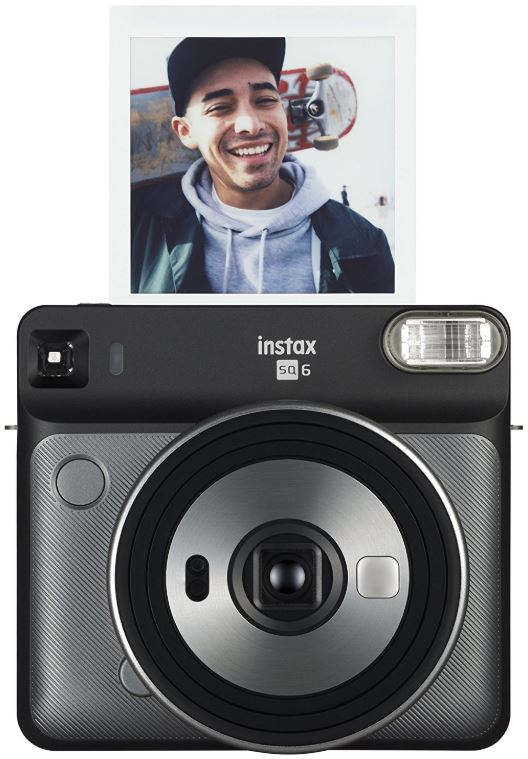 Instax cameras bring your shots to live in minutes, giving you a physical one-of-a-kind artistic production. Like similar cameras, shots from the SQ6 make use of standard 86mm x 72mm film. If you’re not familiar with the size of those shots, it’s roughly the same size as a classic polaroid, or roughly the size of two business cards stacked together.

The SQ6 uses a visually striking square design, as is suggested by its name. Even before you hold it in your hands, it’s easy to tell that the chassis is quite robust. Holding it in your hands, you’ll notice a fine attention to detail in the feel of the camera from one place position to the next. The surface is well polished and controls are smartly placed. From the top, this camera is quite slim and minimalistic. You’ll find only the on/off switch to greet your attention. 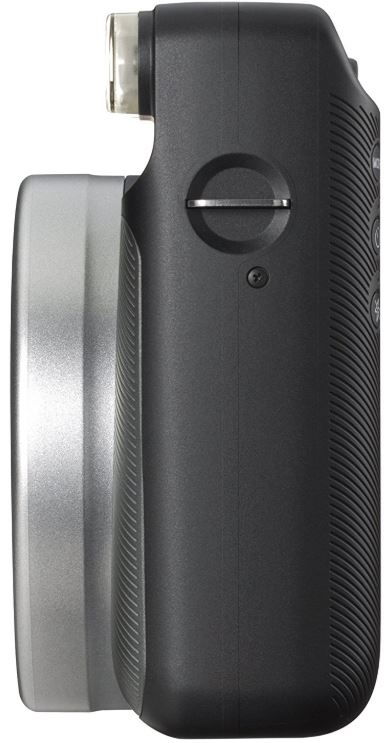 The chassis is composed of a square 4.6 x 5 x 2.2-inch build, weighing just short of one pound with film loaded. That’s light enough to take with you anywhere, and small enough to fit inside most pockets. Aesthetically speaking, there aren’t many color options for the SQ6. You can select between white, gold, and gray.

Within that chassis, the SQ6 uses a retractable mechanical lens, which provides a minimum focal length of roughly 66mm. Shots are taken with a relatively small 32mm field of view. That’s appropriate to the size of the film prints, but it does mean you’ll have to be sure you’ve aimed your shot well before taking it. 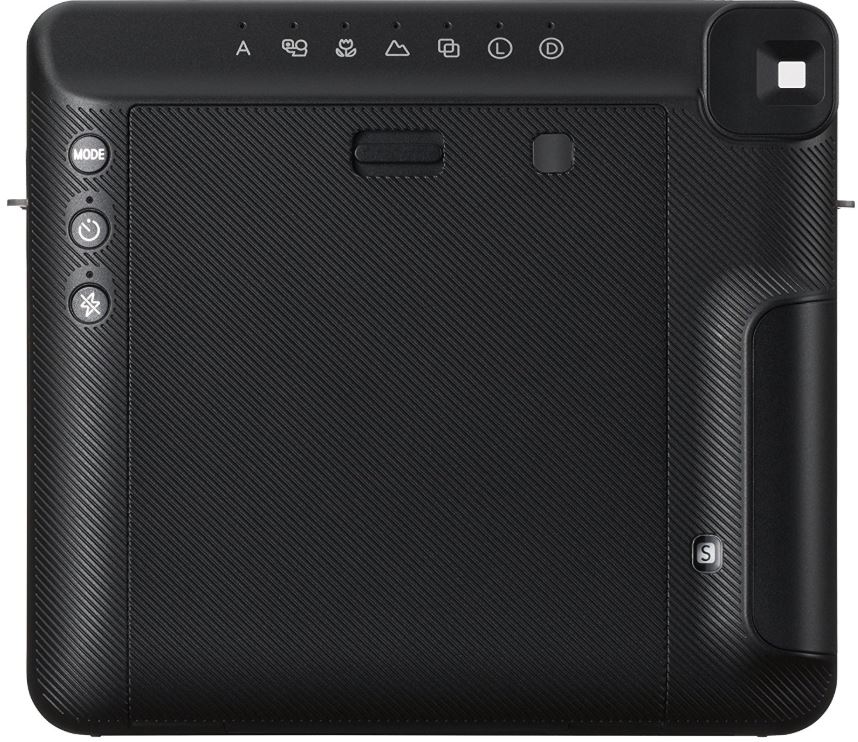 The lens of the SQ6 has motor-driven focusing, with three modes to switch between. Those focus modes give you the ability to quickly toggle your camera to the approximate distance of the subject of your photo. In other words, you can quickly switch to the perfect settings for the kind of shot you’re trying to take. The closest mode is for 0.3mm to 0.5 meters, while the furthest is for shots 2-meters and beyond.

Some of the more noteworthy features include automatic exposure control, which can help prevent you from taking photos that end up looking washed-out. This allows the camera to automatically adjust exposure to accommodate changes in darkness, preventing you from blowing out the exposure of your subject. That’s a particularly important feature for a film camera because there are no do-overs with your shots. 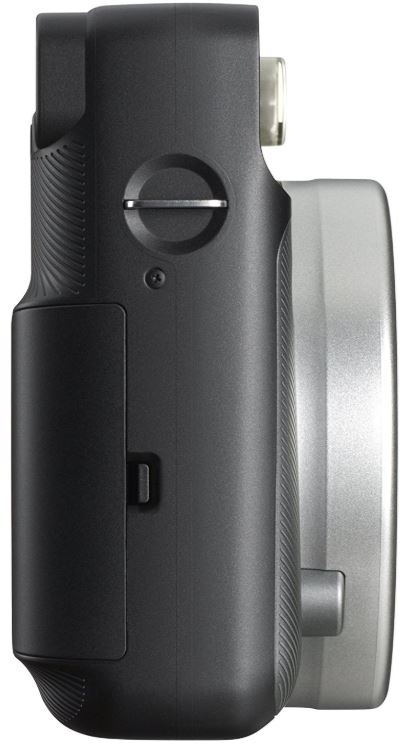 Another distinctive feature of the SQ6 is its strobe color filters, which can be applied to your shots with only one click. On the Square 6, color filters are built-in over the flash rather than applied with some kind of software filter. The unique feature set of the SQ6 continues on with a selfie mode, adjusting the camera to the focal length and exposure ideal for taking a picture of yourself from arm’s length.

You’ll also find some shooting modes that can make things a bit easier for you. Macro mode prepares for close-up shots, between 30-50cm from the camera. Landscape mode is useful for shooting objects and landscapes at distances beyond 2 meters. The double exposure mode initiates the shutter twice, resulting in an artistic shot composed of the two separate images overlaid on the same print. And finally, there is the Light/Dark mode, which toggles the flash and its associated use of color.

You can access those modes by hitting the MODE button on the backside of the camera. Below that you’ll find the 10 second timer button, and the flash-off button. Rather than using a row of LED lights like many cameras, you can see how many films are available with the grip area next to the film quantity window.

The self-timer can be stopped in mid-run, so if you accidentally initiate it, you’ll be able to shut it down before you waste a shot. When you’re dealing with live rounds, as you are with an instant film camera, those kind of ease of use decisions are what make-or-break a camera. Fortunately, Fujifilm has a reputation to uphold, and they’ve brought some excellent design decisions to the SQ6.

The beauty of the SQ6 is that virtually anyone can get great shots using it. Whether you’re an amateur photographer or a pro, the SQ6 can help make taking a good shot as easy as possible. And that’s something you feel in every aspect of the device. Handling the SQ6 is as comfortable as holding it. Using it is no more difficult than loading your film, switching on the camera, and selecting a shooting mode. From there, press the shutter button and you’ll have taken your first photo.

If you’ve never used an instant film camera before, you’ll want to know that it takes about 90 seconds for the film to develop. But speed depends on ambient temperature, so if you’re in a particularly cold environment, it may take as long as four or five minutes to finish developing. And contrary to what you may have heard from pop songs in the past, you shouldn’t shake your developing photos. It won’t have a significant impact on how quickly the photo finishes developing, and it will run you the risk of slightly degrading the image. 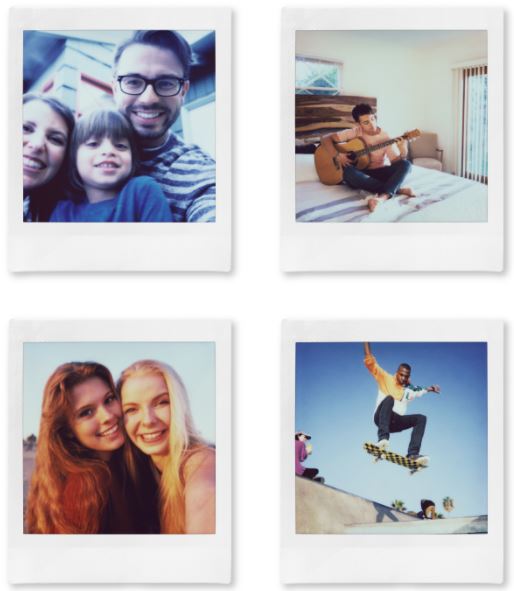 Some cameras become highly specific for what they’re capable of doing. For example, waterproof cameras, sports photography cameras, and dozens of other niche devices. But the SQ6 is surprisingly well rounded. While it’s probably not going to be the primary camera for a wedding, or the best way to take action photos of your son at a baseball game, it’s ready for almost everything short of that. For family photos, vacation photos, artistic endeavors, and anything between, the SQ6 has what you need.

And as far as instant film cameras go, the SQ6 retains all the magic of being able to see an image come to life in your own hands. Its prints offer crisp colors which stand out, and have almost stunningly high contrast for an Instax camera. Even in low light areas, the SQ6 does a pretty good job of bringing out vivid colors. That makes it as useful for spontaneous moments as for anything you could plan. 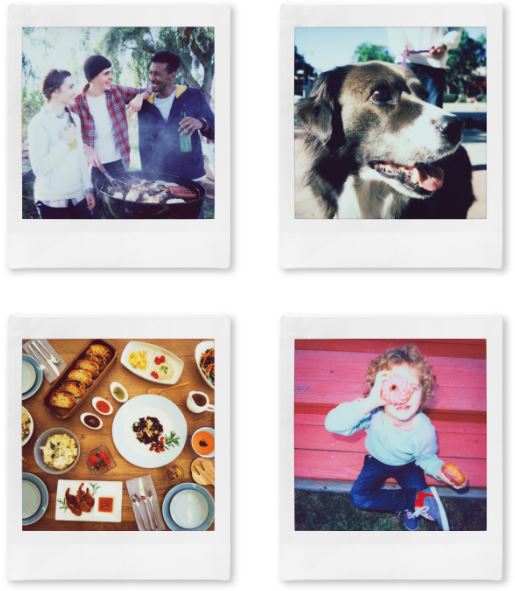 But let’s face it, at least half of all Instax photos will end up being portraits or selfies. And that’s where the SQ6 truly shines. With the high and low key modes, it’s incredibly easy to get great portraits in any number of lighting conditions. You won’t need to break out a special lighting kit, and you won’t have to must out an umbrella to shield the camera from the sun. Whether inside or outdoors, portraits reliably come out looking great.

The Instax Square 6 is powered by two CR2 lithium batteries. How much film will that get you through? It’s enough charge to support roughly 30 packs of 10. In other words, you’ll run out of film long before you have to worry about running out of batteries. Two CR2 batteries are included, and when it does come time to replace them, replacements are relatively inexpensive. It’s unfortunate the SQ6 doesn’t use a rechargeable lithium ion battery, but choosing to use disposables is a large part of what keeps the cost and weight of this camera so low.

One more thing to note is the tripod socket. One problem endemic amongst many instant film cameras is the lack of a tripod socket. Fortunately, the SQ6 is fully equipped with a well-positioned tripod socket, making it adaptable as your artistic endeavors may require. 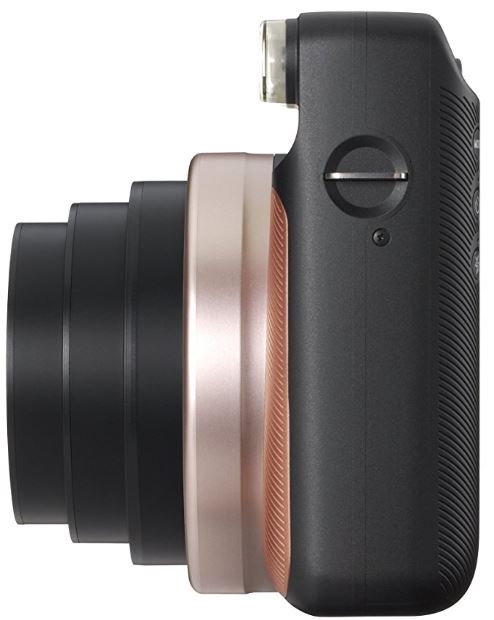 Who Should Choose the Fujifilm Instax Square SQ6?

The Instax Square SQ6 is a great pick for an amateur photographer who likes to take photos. Whether you’re taking family photos, vacation photos, or even just snapping selfies, the prints come out vibrant, and the experience of using the camera is nothing short of fun. That’s because the SQ6 has all the intuitive and effective shooting modes you need to make great shots.

Instant film cameras tend to be fun toys as opposed to the instruments you’d see used by a professional photographer. But it’s possible that even enthusiasts and pros may be drawn to this camera. At the end of the day, the SQ6 can’t do everything. It’s not waterproof, and it’s not something you’d want to use for professional sports photography. But for analogue film prints, you can scarcely do better than the SQ6.