You won’t find many one-size fits-all flight mods. At least, not many that are worth using. Because different pilots need different instruments. When you’re flying a commercial aircraft, you’re not going to need the same control layout as when you’re flying a single engine craft.

Honeycomb doesn’t have the same name recognition as many aviation mod makers. But it’s tough to see why. Their hardware and software support rival almost anything else on the market right now. And their Bravo Throttle Quadrant is particularly tough to compete with at this price point. 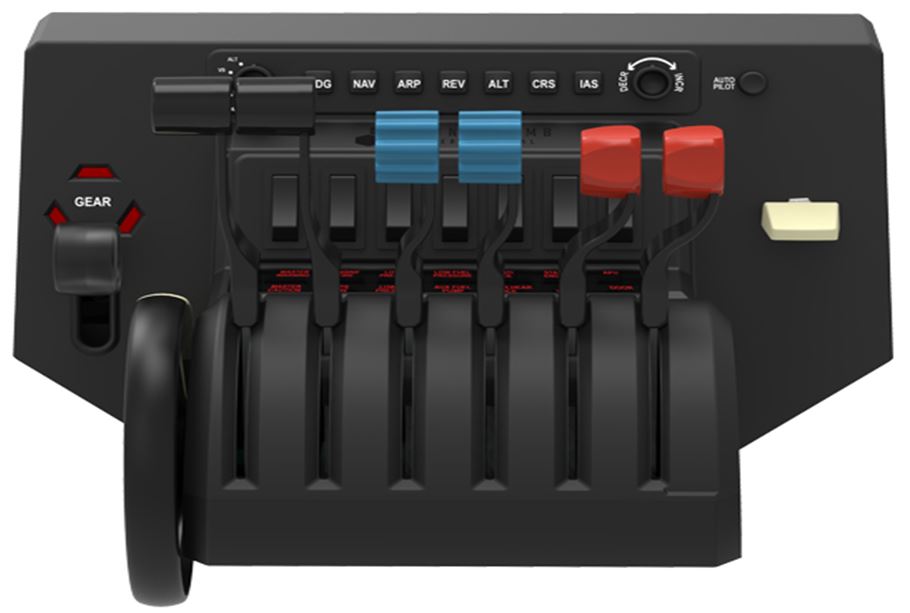 The Honeycomb Bravo Throttle Quadrant is built to emulate a two and four engines commercial throttle aircraft. The single engine and multi engine throttle setup allow you to simulate general aviation crafts, each with separate flaps you can toggle. There are separate spoilers as well, allowing you every degree of control necessary to accurately simulate commercial aircraft.

Whether you’re playing for pleasure or training for the real thing, the Honeycomb Bravo Throttle Quadrant has some convincing features. Unlike some of Honeycomb’s other gear, this panel doesn’t really work like a gaming peripheral. It works like someone ripped it out of an aircraft.

The entire unit takes up pretty close to one square foot of space. Similar to commercial aviation equipment, you’ll find an autopilot panel, annunciator panel, gear lever, trim wheel, and all the switches and controls necessary for flight. There are actually many different details to work through here. 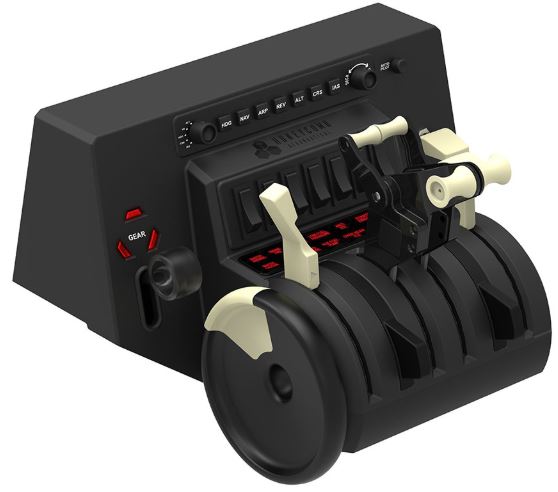 Along the topside of the board, you’ll find the autopilot panel. It’s made to provide all the most common types of features that GA aircrafts and commercial aircrafts would be able to offer. You can adjust the autopilot to head where the plane is currently pointed, decrease or increase desired altitudes, and so forth.

If you’ve got the Honeycomb Bravo setup on a desk, then you’ll find the weight of the unit by itself is generally sufficient for keeping it in place. But Honeycomb does include a mounting bracket. Most people will agree there is a pleasant difference between using a freestanding throttle and one that’s been drilled into place.

Aesthetically speaking, the Bravo Throttle Quadrant mostly looks authentic. Because the construction is partially made from ABS plastic with a matte coating, the console feels more like a regular gaming peripheral than the wonder that it really is. If you took the Bravo Throttle Quadrant and showed it to someone who knew little about aviation mods, they would probably be unable to tell it apart from any other gaming mod.

The use of ABS plastic means you should be careful with the kind of cleaning solutions you decide to use. More abrasive cleaners like alcohol can actually scar this type of plastic, you’ll want to use gentler water-based solutions. 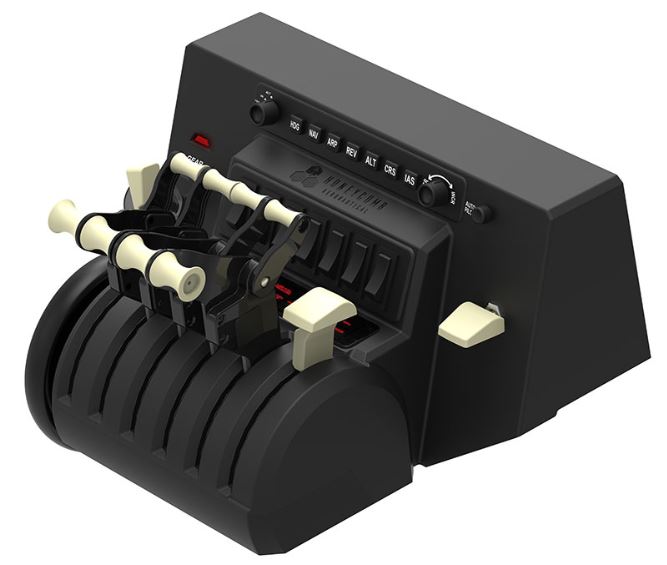 Directly beneath the autopilot panel, you’ll find an annunciator panel with a total of 14 indicator lights. Each can show you the most common system status alerts. The result is true-to-life cockpit warnings, including low-volts, starter engaged, low oil pressure, engine fire, and so on. The layout is basically identical to the layout of similar modern commercial aircraft.

Additionally, the Honeycomb Bravo Throttle Quadrant includes a trim wheel, gear lever, and seven switches which can be programmed to make sure you spend as little time touching a keyboard as possible. Each of the switches makes a satisfying clicking-sound when thrown. It’s a little strange they’ve decided to label the gear lever because it’s so terribly obvious what it is.

Each lever has been designed with color-coded handles: red, blue, and black. Though none of this equipment was made specifically for inexperienced users, it was made to be pretty intuitive. Whether or not you’re actually familiar with this type of gear, becoming familiar doesn’t take very long.

The throttle lever has a commercial aviation design, including thrust reversers. Which is essential for the Bravo Throttle Quadrant because that’s what allows you to fly either a two engine or a four engine setup. Once you’ve got it in your hands, you’ll easily notice the firm feedback against your hand as you glide the controls.

The annunciator panel doesn’t support any non-commercial aircraft options. That’s because of the rather specified nature of this equipment. The Bravo Throttle Quadrant isn’t intended to be a one-stop replacement for every mod you might want in your cockpit. It’s more like one piece of equipment intended to work in concert with other specialized gear to make for a uniquely immersive performance. 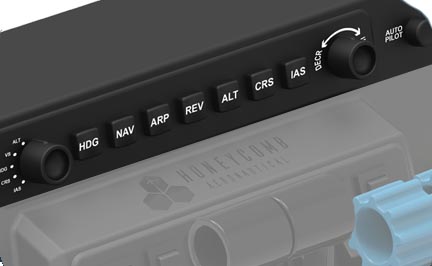 Honeycomb provides software support for both PC and Mac users. Though that support only extends to versions made in the past decade or so. You’ll have a devil of a time trying to get gear like this working on Windows 98. But unless you’re trying to do something unusual like that, essentially nobody should encounter those kinds of issues.

But it doesn’t have the same level of refined polish as their hardware. It’s hard to hold this against Honeycomb because it doesn’t really get in the way of functionality, and software isn’t their core product. But nevertheless, it does feel strange to open software and have it feel like you’re using something that was made in 1995. 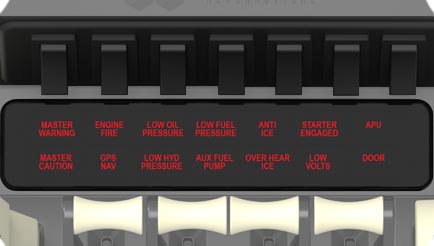 Likewise, mechanical aviation mods are fantastic, but not all mechanical mods are made equal. Honeycomb equipment provides almost no adjustability when it comes to the physical feedback of their products. You can’t get inside and increase or decrease the feedback of each lever, for instance.

That’s not necessarily a bad thing. Not everybody wants to get out a wrench and start physically changing lever-feedback. Especially if you’re trying to capture authenticity rather than full customization. Sometimes it’s worth having that level of customization, but for a quad-throttle kit like this, it’s not such a big deal.

It would be nice if Honeycomb had included some swappable heads for each of the throttles. Though the included black, blue, and red layout is easy to work with, more customization options would’ve been a pleasant addition. Especially because the top of each throttle is the point at which your hand will be making most contact with the unit, and so those throttles are at heightened risk for the forces of wear-and-tear. 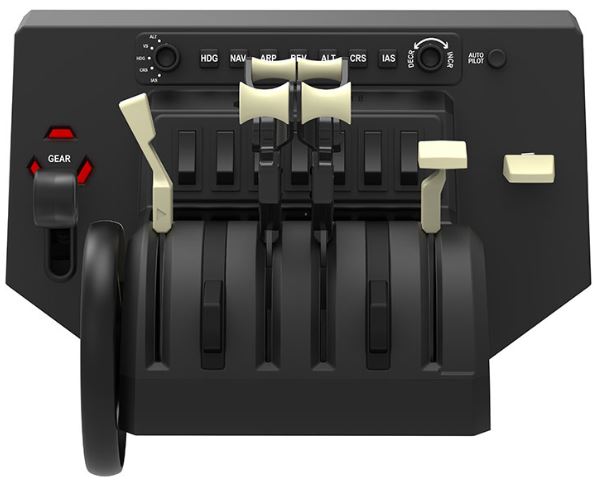 Honeycomb makes their equipment to be as universally adaptable as possible. In basically any simulation that doesn’t require special proprietary equipment, you ought to be able to find full compatibility with the Bravo Throttle Quadrant. That includes both the Windows and Mac platform.

Similar to most Honeycomb equipment, these controls include their own mounting bracket. The bracket is compatible with both Honeycomb and Saitek equipment. Though the bracket is really nothing special, if you’re trying to stick the Quadrant on a faux cockpit or the topside of a desk, it can serve the purpose with distinction.

In addition to the bracket and a starter guide, Honeycomb includes a 5-year warranty with the Bravo Throttle Quadrant. It’s tough to estimate how long this kind of equipment can really last. With years of use, the plastic on the console will become slightly polished by repeated contact with skin. 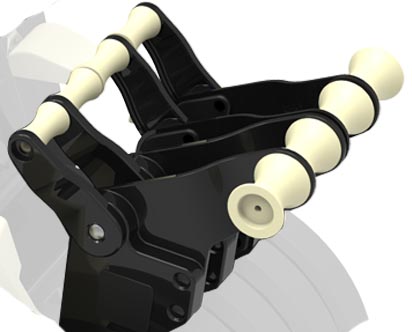 Apart from making the Bravo a little less attractive, that shouldn’t be a concern. It’s really only physical abuse that would lead this console to provide a significantly shorter lifespan. When you start flying, it can be exciting, and it’s easy to get carried away. The Bravo Throttle Quadrant is sturdy, but isn’t intended to take serious abuse.

Finally, it may be worth noting that Honeycomb makes their gear in California. Their designs are built by aerospace engineers, pilots, and other people who love, appreciate, and understand the mechanical design of aircraft. That’s why these controllers don’t look like they were designed by someone who’s never touched an aircraft before, as so many flight controllers often do. 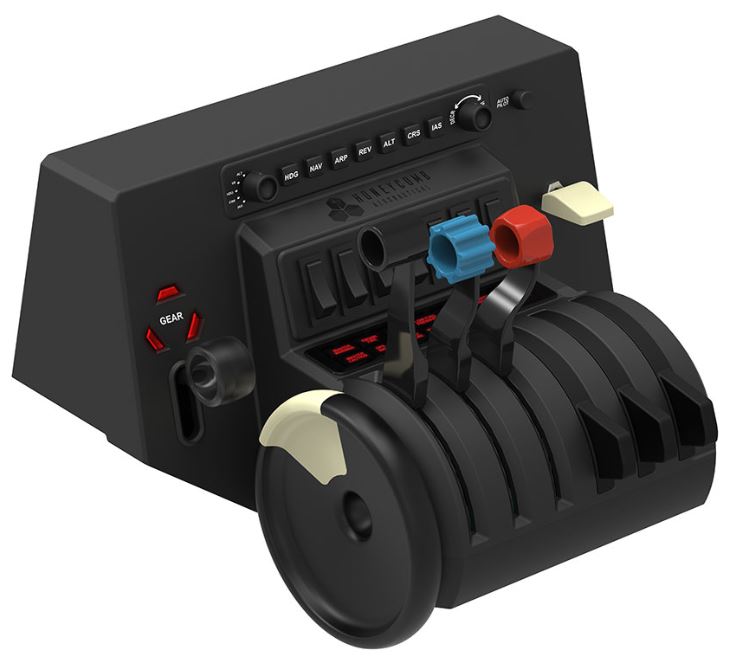 Who Should Choose the Honeycomb Bravo Throttle Quadrant?

The Honeycomb Bravo Throttle Quadrant is approachable. Even before you take a look at the included instructional guide, it’s easy to get a feel for the layout and what everything does. That’s because these designs weren’t made by game-enthusiasts who wanted to make a cool flight sim controller, they were made by aerospace engineers and pilots.

Honeycomb’s mods are generally well constructed, and there’s really no reason to think the Bravo Throttle Quadrant couldn’t survive a decade of service. Because Honeycomb has a wider ecosystem of similar products, it’s nice to know you’ve always got options for expansion in the future. Especially if you want to use other flight accessories in conjunction with the Quadrant.

In summary, the Honeycomb Bravo Throttle Quadrant was made for people who want to simulate commercial aircraft. If you were only interested in flying warbirds, you wouldn’t need half of these controls to get off the ground. But if this is the kind of thing you’re looking for, then you’d have to spend considerably more to start finding anything resembling a superior alternative to Honeycomb’s Quadrant.