Getting your hands on some wireless sound equipment isn’t hard. But if you take the time to find audio equipment designed for your needs and preferences, you will almost invariably end up with a superior listening experience. Some listeners are trying to find extra boosted bass, while others are mostly interested in taking a bunch of Bluetooth calls. As a result, different headsets are made for different people.

Though you’ve probably never heard of them, this brand originates from Finland. And their Bluetooth headphones have at least a couple of neat and distinctive features. For starters, the Iqua Yuppy Bluetooth Headphones are neckband headphones. That means you’re always looking at a pretty familiar list of pros and cons. 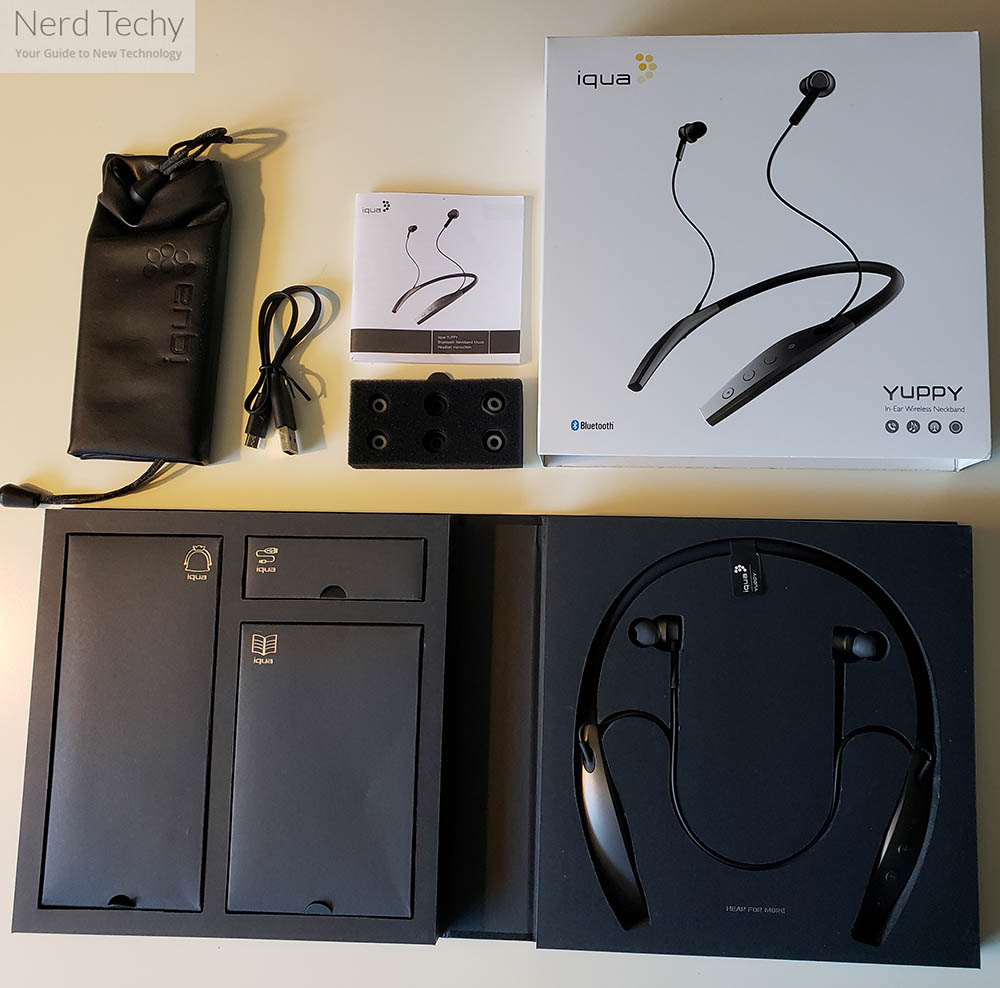 For pros, the developers have the opportunity to use the larger body of the neck-rest to stuff a larger battery. They’ve got more room for microphone placement. User interfaces tend to be a bit friendlier because there’s more space to place them. Since everything doesn’t have to be crammed into a tiny space, that space can be utilized in valuable ways. For instance, by adding a vibration function.

For cons, headsets like these aren’t quite as portable as something like true wireless earbuds. They also use a hybrid wired/wireless design that’s sure to be polarizing. But that’s pretty much the end of the list of cons. If you’re willing to deal with the extra size, and you don’t mind the wired/wireless design, then there are some good reasons to try out neckband headphones. 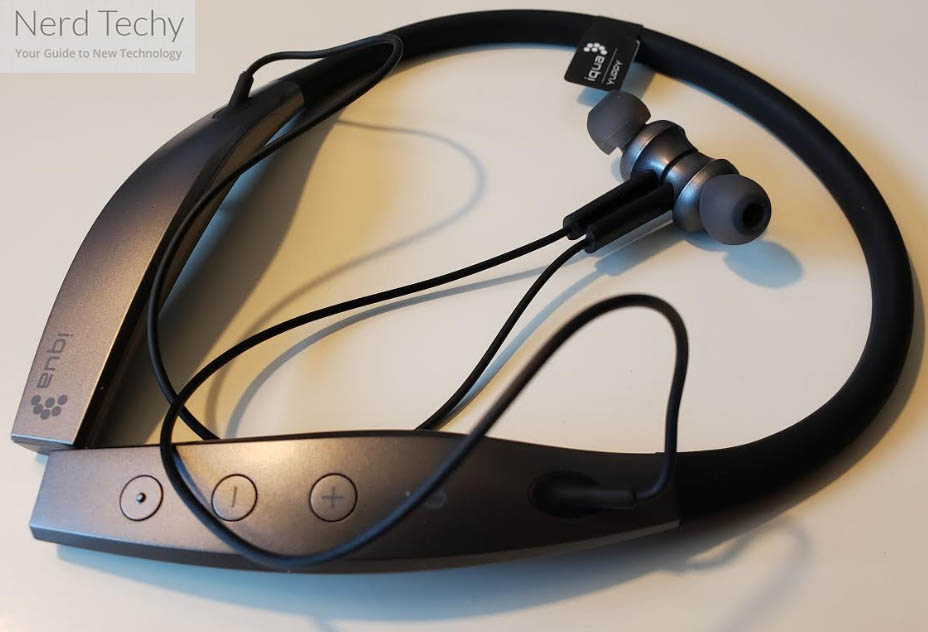 The Iqua Yuppy headphones weigh about 1.7 ounces. That makes them clearly very lightweight. But at the same time, still a tad heavier than true wireless earbuds. The design includes mic-clips to help smoothly fit around your ear, but the wires themselves aren’t retractable. Deciding not to use retractable wires is another design decision with pros and cons, but it’s not something that should dissuade many people. 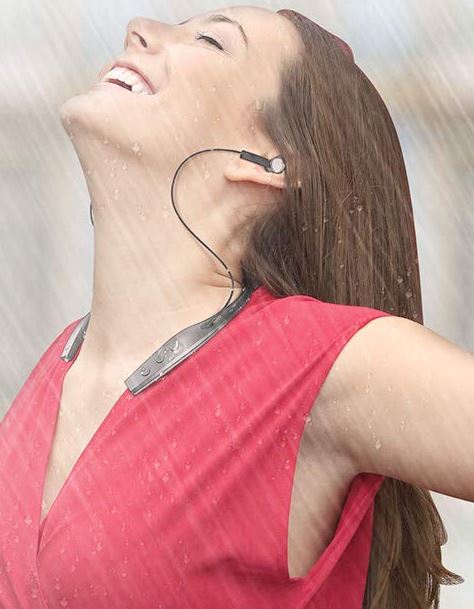 The Yuppy are built with an IPX7 waterproof rating. It’s supposed to not only protect from the ingress of water, but it’s supposed to be resistant against the corrosion of sweat. That’s actually pretty important for a larger bodied unit like this. There’s a reason that a faux-leather chair will start disintegrating after about 18-months if a person is sweating on it. Human sweat is surprisingly corrosive. Notably, the waterproofing includes a nano-coating. It’s basically a hydrophobic substance that works well a repelling water, but doesn’t work very well at handling submersion.

For controlling these earbuds, things look pretty good. As is often the case with neckband headphones, the user interface is pretty approachable. Most of the buttons are stuffed onto the left side of the neck-rest. And there are a total of only three buttons there. The first of them is a general multi-function button. It’s supposed to let you answer calls or skip between tracks. The next two buttons are volume buttons, allowing you to increase or decrease the volume in slow increments. 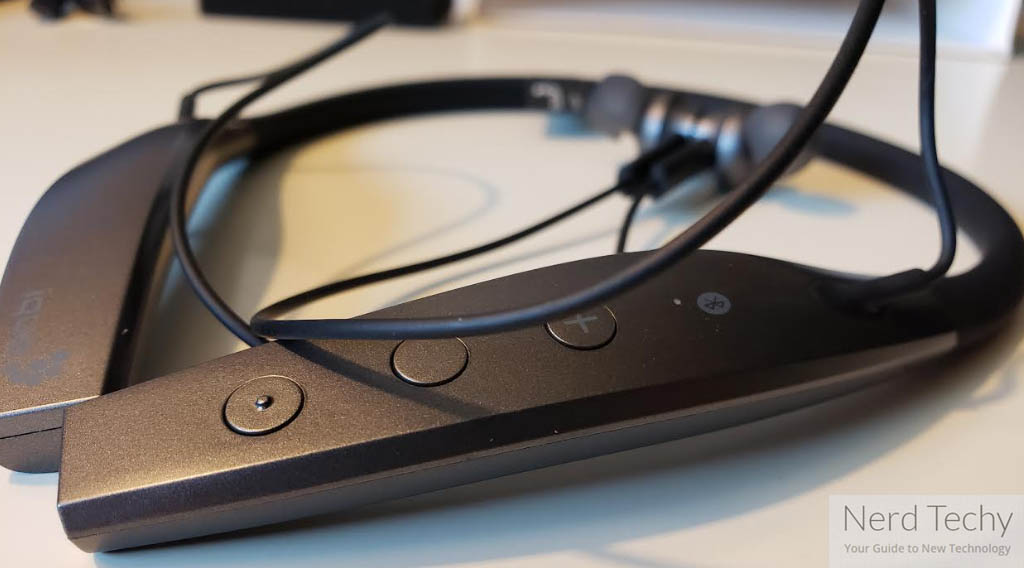 Shoving a bunch of controls onto one multi-function button is a tad inelegant. But considering you probably use the controls on this button pretty infrequently, it’s not a grave inconvenience.

Another thing worth emphasizing about the neckband is its call-attention features. The neckband itself provides a gentle vibration to let you know when a call is coming. That vibration doesn’t quite compare to what you’d experience with a smartphone or game controller. But the fact that the neckband is positioned against your neck makes it very easy to identify an incoming call.

The earbuds use a pretty distinctive ergonomic shape. But there’s basically two things you need to consider about comfort for some neckband earbuds like these. The first thing is the ear-tips. For the most part, these ear-tips are pretty ordinary. You’ve got the standard array of sizes to pick between, and the silicone itself has a skin-like texture that feels perfect. The actual security of each earbud in your ear will partially depend on if you’ve taken the time to choose the right size of earbud. 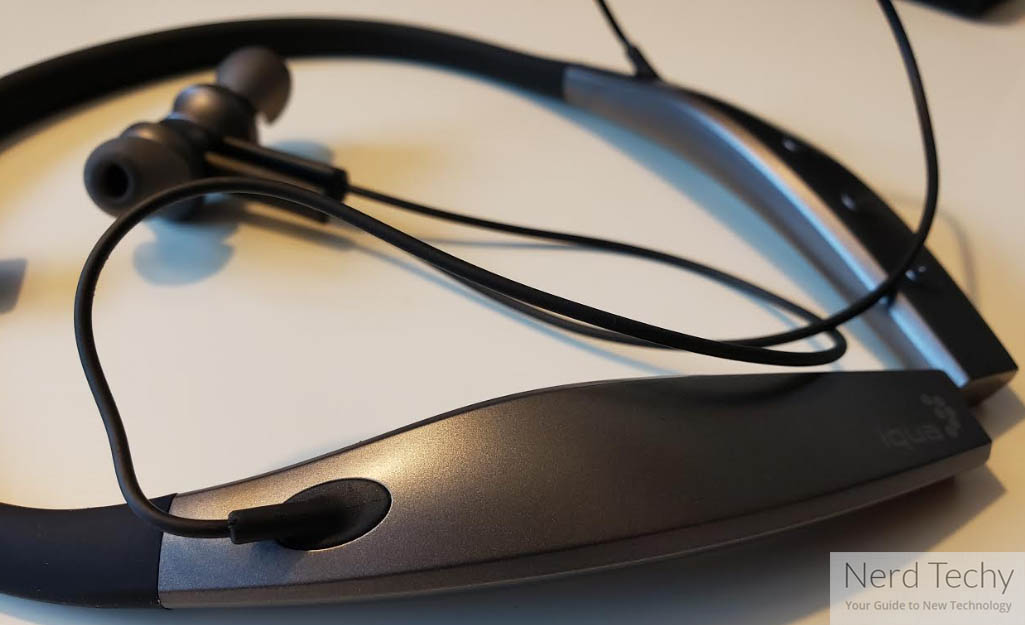 The second thing to consider is the way in which the neckband rests against your neck. In this instance you’re looking at a principally plastic design that’s been reinforced with a smooth layer of silicone. That reinforced layer makes these headphones quite bendy and flexible, and makes it well suited to matching the contours of your body. It also allows these headphones to be somewhat resilient to damage while traveling. A little bit of bending or flexing won’t damage them, though they’re not technically foldable. 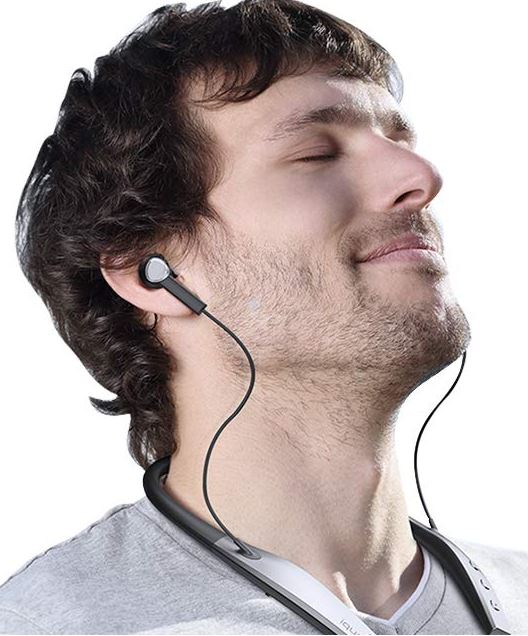 Bluetooth 4.2 is at the center of wireless connectivity for this kit. And that’s pretty much all that is necessary for a good connection on a pair of neckband headphones. When you decide to use true wireless earbuds, you’ve got some good reasons to stick to Bluetooth 5. Because the fifth iteration of Bluetooth has a number of features that are almost specifically advantageous to those kinds of earbuds.

But for earbuds that have a wire connecting them, like the Iqua Yuppy, Bluetooth 4.2 is perfectly fine. It’s forward and backwards compatible, and it provides all the syncing features necessary for a smooth connection with the rest of your devices. Though you only end up with about 30-feet of connectivity between yourself and the devices which you are connecting with. It’s a pretty average connectivity distance. 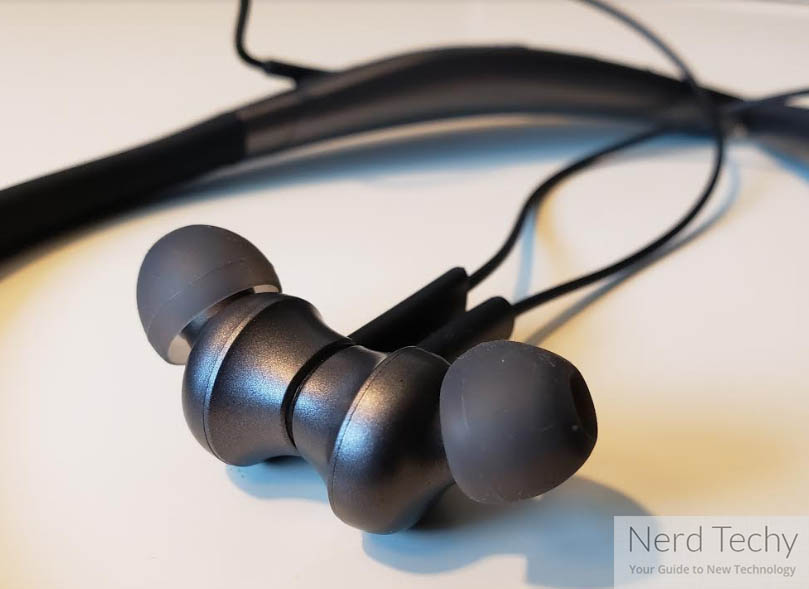 According to Iqua, the battery lifespan can run out towards 10-hours. That’s actually an awkward middle position between being great and being terrible. Because compared to a pair of true wireless earbuds, that’s almost three times the average battery capacity you’ll get from the buds alone. However, those kind of earbuds often come with a charging case. There’s no charging case involved with Yuppy.

Do they actually provide you with 10-hours of playtime? Well, that partially depends on you. If you’re receiving calls every 5 minutes, then this headset is going to have to do a lot of vibration. And that kind of thing can throw off the battery calculations. The same is true for people who prefer listening to their music at very loud levels. If you decide to run the volume at 100%, you might expect closer to 7-hours of playtime.

But for people who don’t want to deal with charging cases, this design is admittedly much simpler. And hitting the 7-hour mark is perfectly respectable. For people who are using these headphones for athletic activities like riding bikes, you probably won’t end up on the trail for more than 7-hours in a row, right? 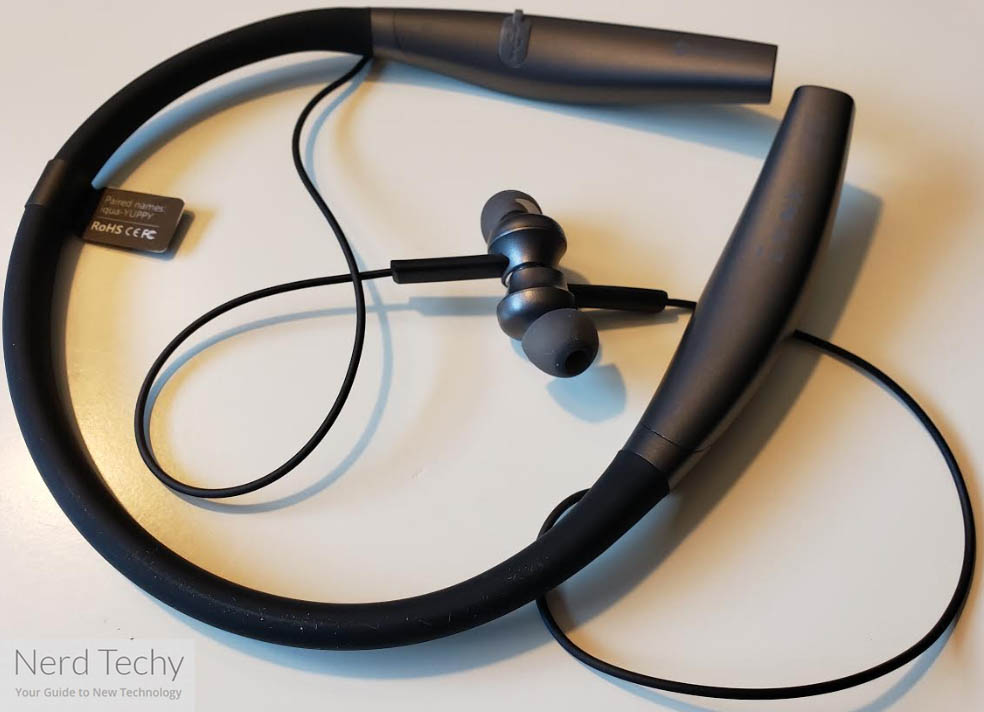 Iqua Bluetooth Headphones were made to master a wide soundstage. Even though their advertising suggests that these earbuds are using 40mm drivers, this is some kind of translation mistake. They’re actually using more common 4-6mm drivers. Because the Iqua Yuppy are running quad core dual drivers, two drivers per earbud.

That collection includes both a standard dynamic driver and an armature driver. Having two separate kinds of drivers means you’re able to replicate all portions of the tonal range in a very accurate way. Even though dynamic drivers don’t usually have the best bass performance, the armature driver can really help fill it out. The same is true for the upper treble range. The end result is an extremely well rounded sound signature, especially for a pair of earbuds down towards this price range.

It may also be worth noting that the high Performance CSR 8635 chip helps to bolster what Bluetooth is already does well. You don’t have support for the aptX codec or the low-latency version, but you do have support for basically all other wireless and audio standards in common use. 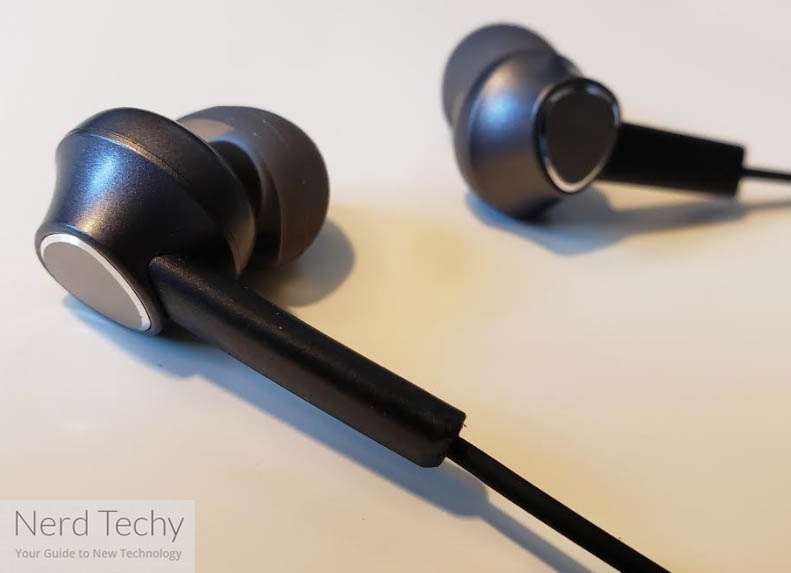 Since there’s a vibrational feature, it makes sense to ask, what are these headphones compatible with? And the answer is basically everything. You can run smartphones, tablets, and virtually anything else that would ordinarily connect with Bluetooth headphones. That includes support for Android, iOS, and so on.

One thing that’s conspicuously missing from these earbuds is the inclusion of some kind of ambient noise protection. Sure, having some music playing in your ears provides a decent shield from noise around you. But you can always do better. For people who are in environments with low droning noises, like engines, active noise cancelling can be worth investing into. 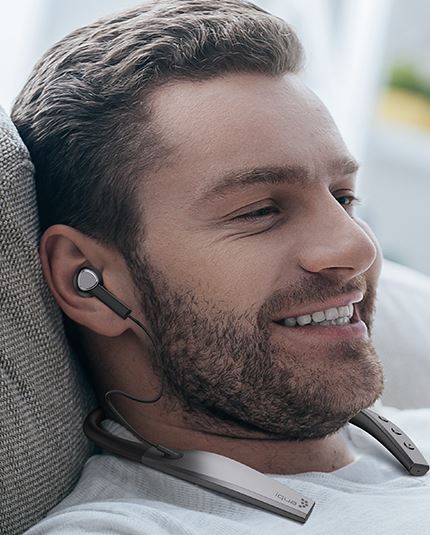 And for people who are in loud environments, but don’t want to blast their ears with music to drown out the nose, it can be worth getting memory foam ear-tips. Those kind of extras aren’t included with the Iqua Yuppy. And since these earbuds do not penetrate your ear canal to fit, the amount of passive protection they do provide is a little on the lower side. As is often the case, that’s a split blessing. It does allow you to maintain more awareness of the environment around you, which can be a good thing. 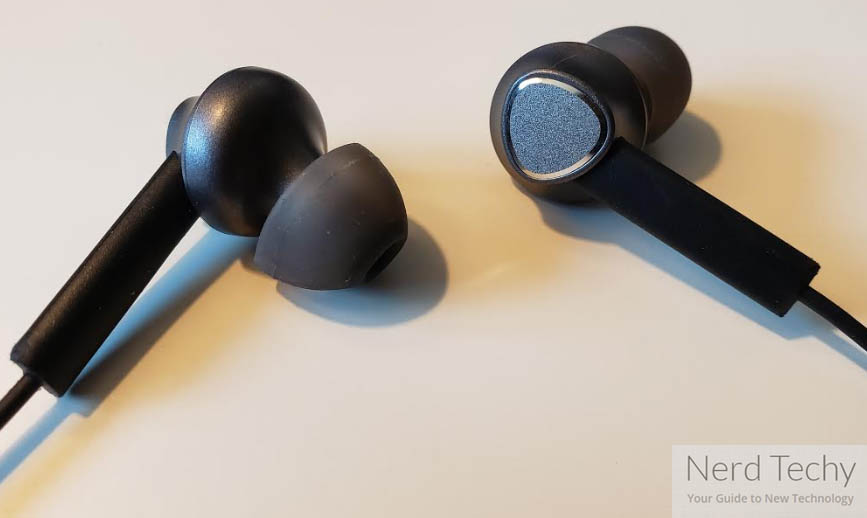 The Iqua Yuppy Bluetooth Headphones are a strange device. When it comes to their battery capacity, they’re in the middle between great strength and weakness. In a practical sense, 10-hours ought to be enough to get the average user through a day or two. And that’s really enough to give them a passing grade for this category.

When it comes to ease of use, these headphones try and split the difference between convenience and full sized controls. They included two separate volume buttons, which aren’t used to control any other features. That’s pretty cool because the volume controls are the one control you’ll probably use more than any other. But rather creating another four buttons, the rest of the commands are stuffed into a multi-function button. That means there’s at least a small learning curve involved with mastering these headphones.

The vibrational feature isn’t unique, but it is done well. The vibration is gentle enough to not tank the battery, but powerful enough to not be misconstrued when a call comes in. For people who are active and need earbuds that stick with them, the Iqua Yuppy are a pretty solid choice.