It can be tough to get comfort, noise isolation, and portability to all work together. Going after one tends to sacrifice another. Of course, running active noise cancelling features can help alleviate some of those problems. When you can worry less about noise isolation, that frees up developers to think more about other things. But since there’s no such thing as the right balance for all people, in all circumstances, you still need to be able to balance these considerations to find the right headset.

It feels Mpow releases a new series every year. This time, their new line of releases includes the H12. In a lot of ways, these headphones are just an upgraded version of what Mpow has created in the past. More specifically, the H12 features some fairly compelling ANC alongside some decently protective passive feedback. 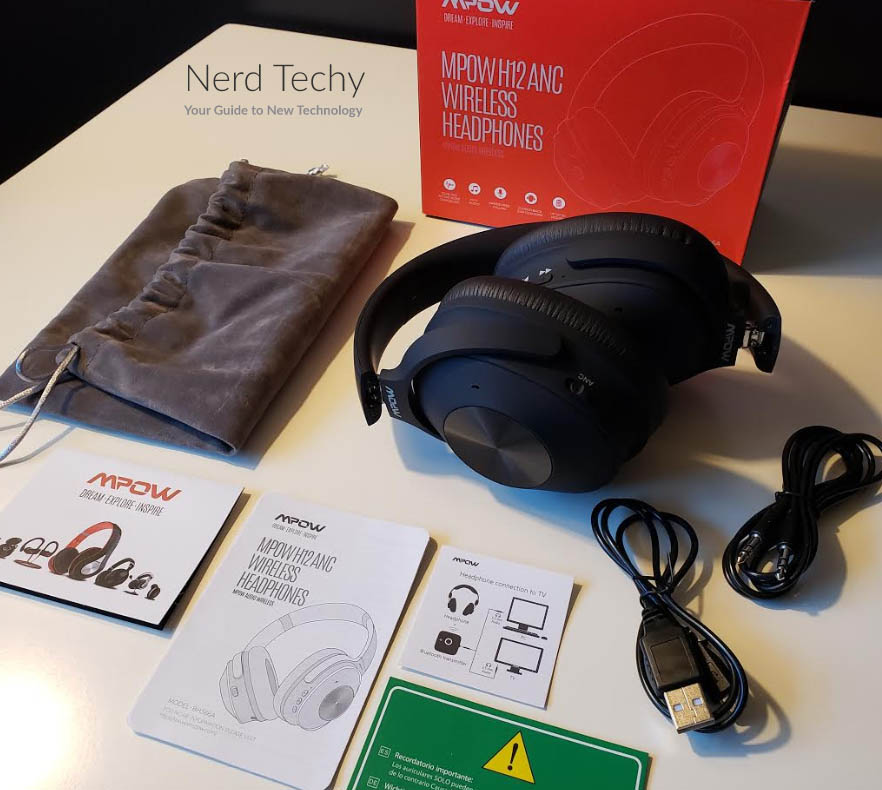 But since different types of headphones are made for different listeners, the H12 are not ideal for all circumstances. You might look a little silly trying to use these for exercise, but they’d do wonderfully for blocking noise on a flight. As with most pairs of headphones, most of the H12’s features are closer to average than anything else. But there are at least a couple of domains where they stand out.

Aesthetically speaking, the H12 (2019 Version) Hybrid ANC Headphones look as generic as can be. For someone who doesn’t want their headphones to stand out, that probably means the H12 are perfect. The matte black exterior could be mistaken for a million different pairs of headphones, were it not for the Mpow logo being written at the base of the headband. 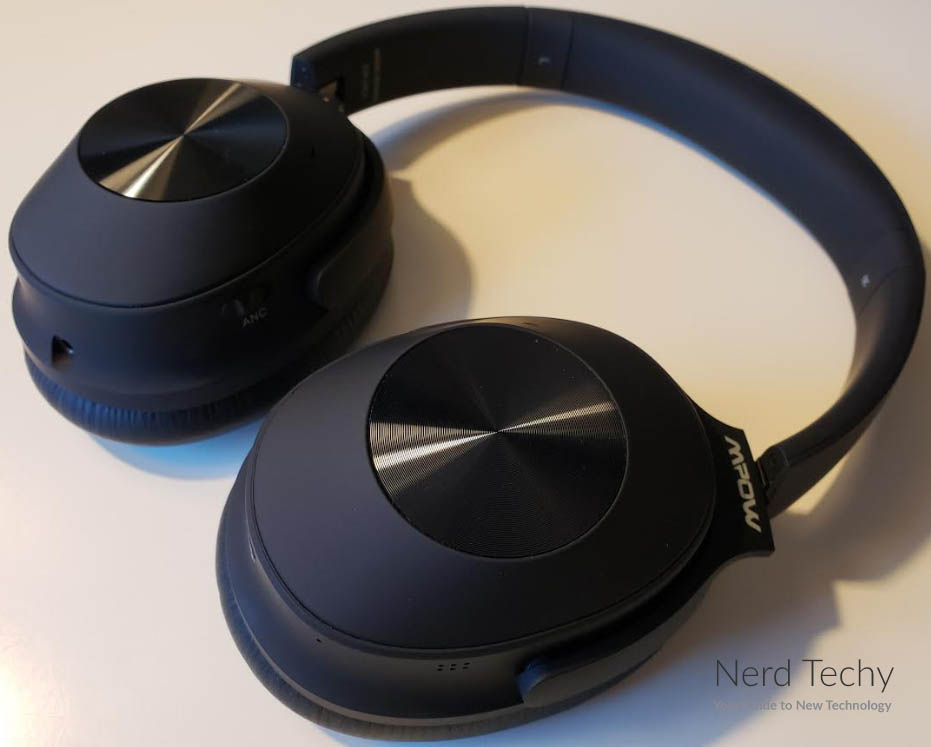 The only highlight that helps them stand out at all is some shiny metal plating on the exterior of the ear-cups, which looks as though it might be a set of touch controls. But the Mpow H12 does not make use of touch controls. Instead, they’ve gone with traditional analogue control buttons. More specifically, there’s an ANC switch on the left ear-cup, and some play/pause and volume buttons over on the right ear-cup.

The volume buttons are also multi-function buttons to help you handle incoming calls. Since they’ve shoved several functions onto the volume buttons, you do have to be a little careful when turning up or down volume. One wrong move and you might accidentally hang up on someone. 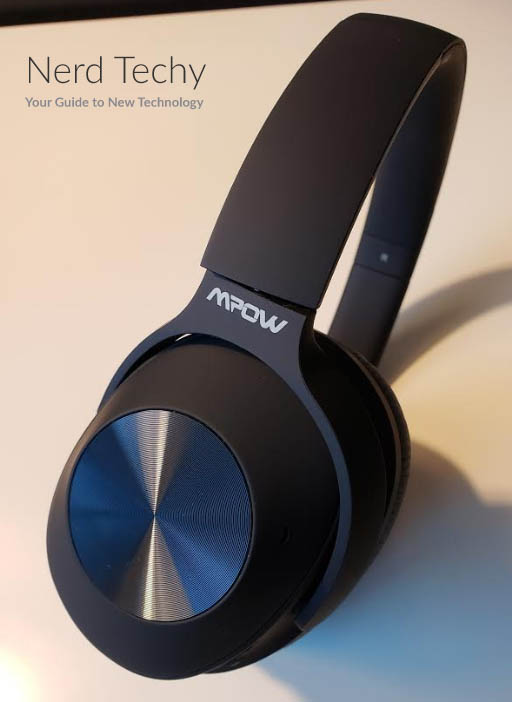 Over-ear headphones are nearly always the best option for comfort. So out of the gate, the H12 are going to end up scoring pretty high marks in this category. But beyond that strong baseline, these headphones don’t go out of their way to greatly expand on a good start.

Their comfort design is pretty standard stuff. For starters, they’ve decided to use memory foam inside the ear pads. The memory foam cushioning is everything people have come to expect from headphones, and it’s wrapped in a fairly breathable audio fabric. Depending on how you treat them, these ear pads ought to be able to hold together for at least 3-4 years of consistent use. 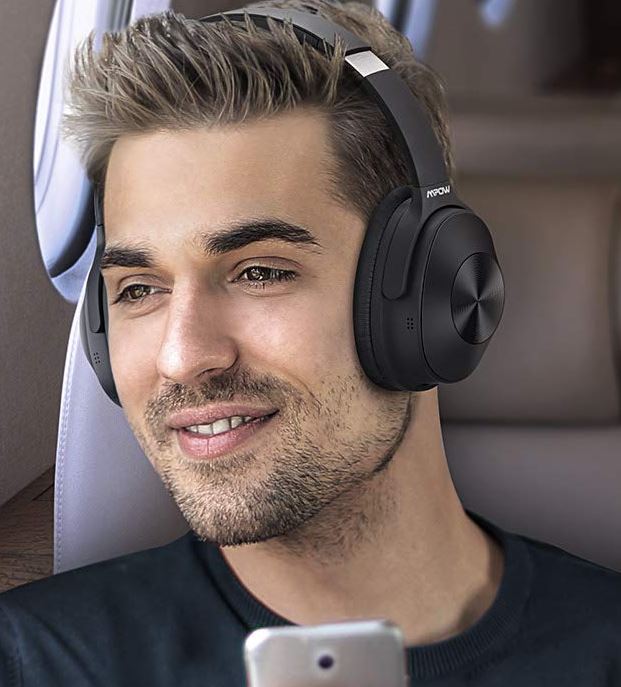 The depth of the ear cups isn’t that large. Shallower ear-cups is actually a pretty common design decision for portable wireless headphones like the H12 these days. Because it makes them less bulky. But at the same time, people with larger ears may find them squished slightly by the inside of the ear cup. Though it doesn’t cause immediate discomfort, it could become a problem after several hours of consecutive use. 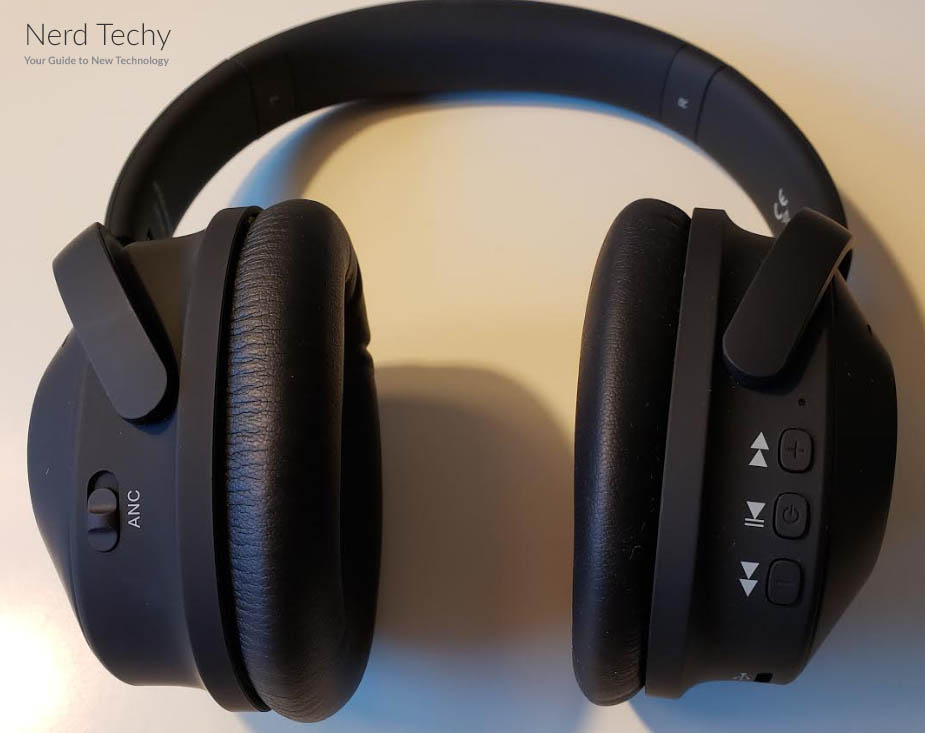 The H12 headphones make use of Bluetooth version four to handle their wireless connection. Though it’s not the fifth version, this is still sufficient to guarantee a pretty smooth connection between peripherals. You even get essentially the same auto-pairing features as with Bluetooth 5, and compatibility is essentially identical as well.

Things remain consistent when you look at the rest of the wireless connectivity as well. For instance, when it comes to connection distance, you can expect a maximum of 33 feet. That’s terribly average, and for good reason. It’s more or less all that the average user will need. 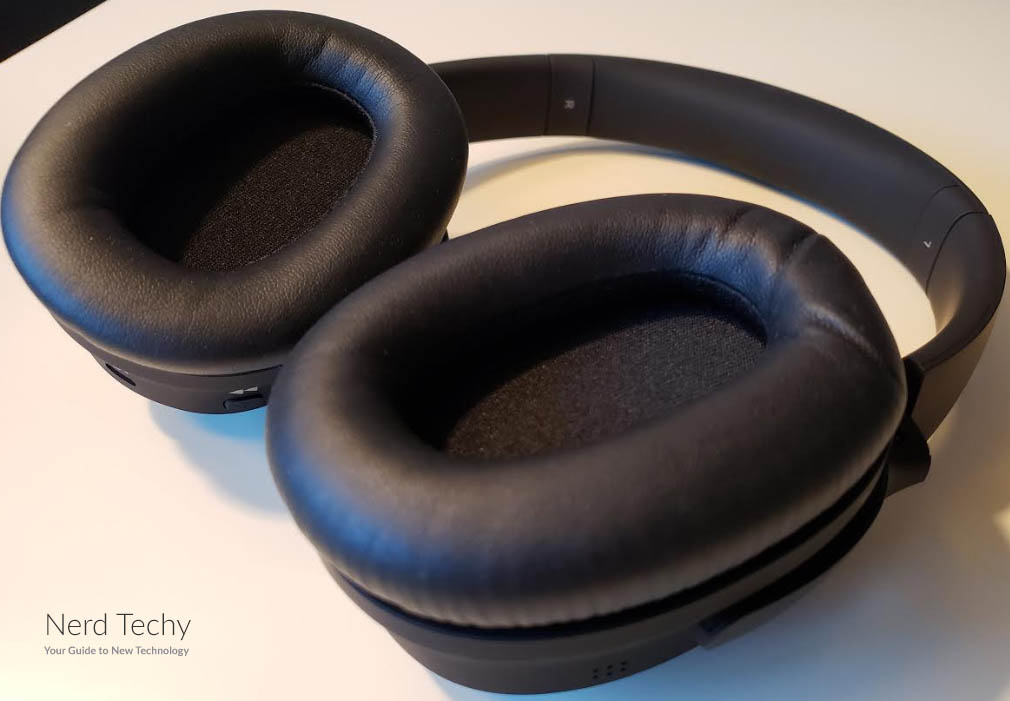 Onboard the H12 you’ll find a pretty sizable 500mAh lithium-ion battery. With it, the H12 are supposed to be able to withstand 30 hours of playtime between charges. That’s a claim being made more and more often by over-ear headphones. It’s especially prominent on ANC headphones because developers slightly increase their battery size. But their estimates rarely go on to accommodate ANC as a consideration.

Assuming you’re going to be running the ANC on a regular basis, you’re not going to end up with the advertised 30-hours. You’re going to get much closer to 20-hours, depending on your volume levels, and whether or not you’re willing to make a wired connection. 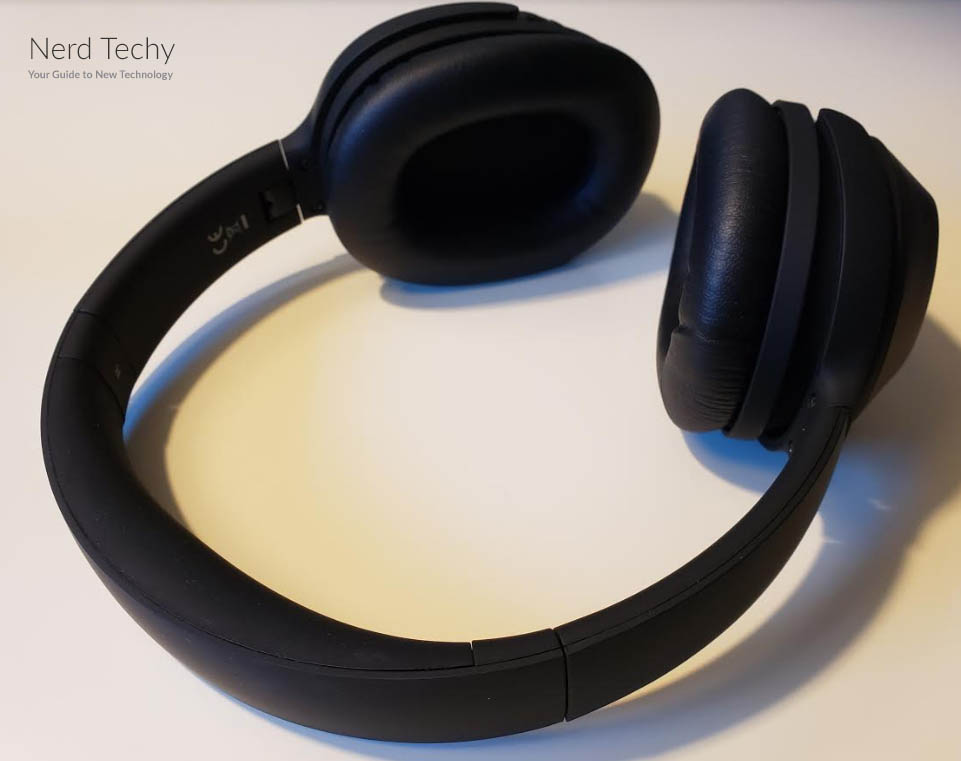 Swapping over to a 3.5mm cable instead of running Bluetooth can extend your battery times by several hours. The included cable only runs about 30”, so that’s not ideal for stretching from a couch to a TV. But it’s about perfect for carrying on you and running it from the phone in your pocket up to your head.

It’s supposed to take about three hours to recharge from empty because unlike the latest TaoTronics headphones, these ones don’t have any rapid recharge features. Those kind of features are still quite uncommon, so it’s hard to hold that against Mpow. 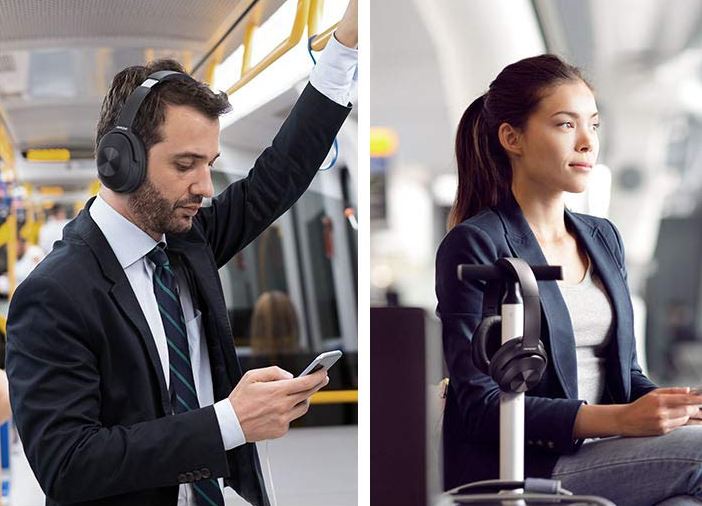 For sound, you’re looking at a pair of 40mm audio drivers. That’s one of the more common sizes for wireless over ear headphones because it’s a nice compromise between 30mm and 50mm. Behind that, there’s an advanced CSR chip to help keep your audio transmission lossless. For people who are interested in using higher quality audio codecs, that’s a pretty important inclusion. If you stream all your music off the web, you probably care less about that. But it’s nice to have support for higher bitrate files.

Every pair of ANC headphones will sound best while you’re using the ANC. That’s because even while the ANC is off, many factors about their design were made intending the ANC to be turned on. For instance, these ear-cups let-in a small amount of ambient noise intentionally. That helps the ANC work more effectively. But when the ANC is off, that just means you have somewhat lousy passive isolation left over. 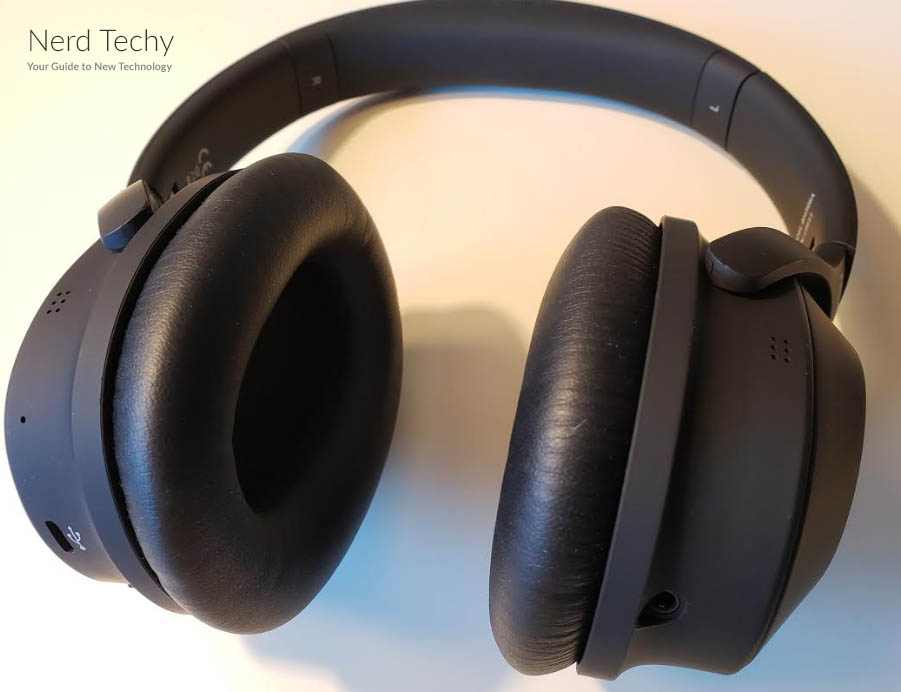 Assuming you’re running the ANC, the H12 do sound pretty solid. The bass tones come through with a nice thud to them, and the treble has plenty of crackle. It would be fair to say that these headphones are easily just as good as anything else Mpow has created over the past three or four years. Because in a lot of ways, they’re using the same technologies as Mpow’s older headsets, just slightly revised for the 2019 version.

Those revisions are marginal in most ways, but small differences can add up. Especially when one difference enforces another. For instance, slightly upgraded Bluetooth capacity can drive down the battery consumption. Along with a slightly upgraded battery, the results can be more than you’d expect on paper. But if you’ve heard Mpow headphones before, then you should already have some fairly accurate expectations for what to expect from the H12.

A lot of the time, the microphones on these kinds of headphones ends up being an afterthought. Here you’ll find a microphone supported by CVC 6.0 for a little extra boost to call clarity. For business and personal calls, that can help you stay in touch much better. 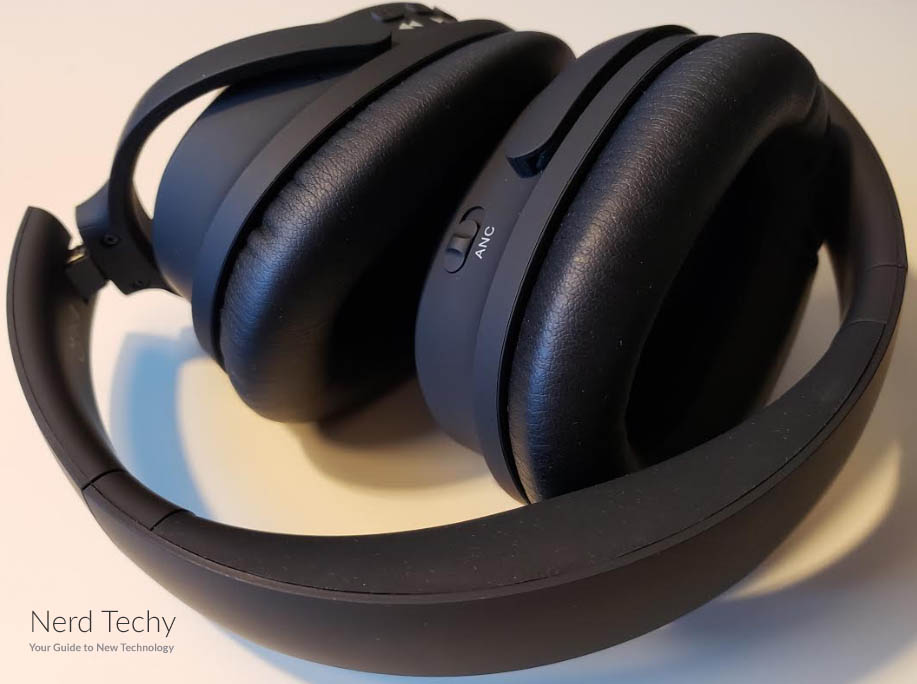 CVC tech basically works by blanketing some white noise behind your voice. The effect is very professional; it sounds a bit like you’re working from a call center. Though it can’t cut through as much noise as something like a two-mic setup, it’s pretty much the next best thing. It’s certainly much cheaper than taking the leap to a business quality calling headset.

These headphones include a 3.5mm audio cable, a USB charging cable, and a small drawstring bag to keep it all together. The bag isn’t exactly waterproof, but it can help with cable management. They’ve also included a user manual. But if you’ve ever had devices with lithium-ion batteries before, and you’ve used Bluetooth before, then you probably won’t be able to learn anything.

Many people still have not tried ANC. It’s been an expensive feature until quite recently. And until quite recently, you didn’t see ANC done very well by generic brands. But it’s getting more common by the day. The Mpow H12 has pretty solid ANC. It’s actually something you might consider using even without the aid of music. 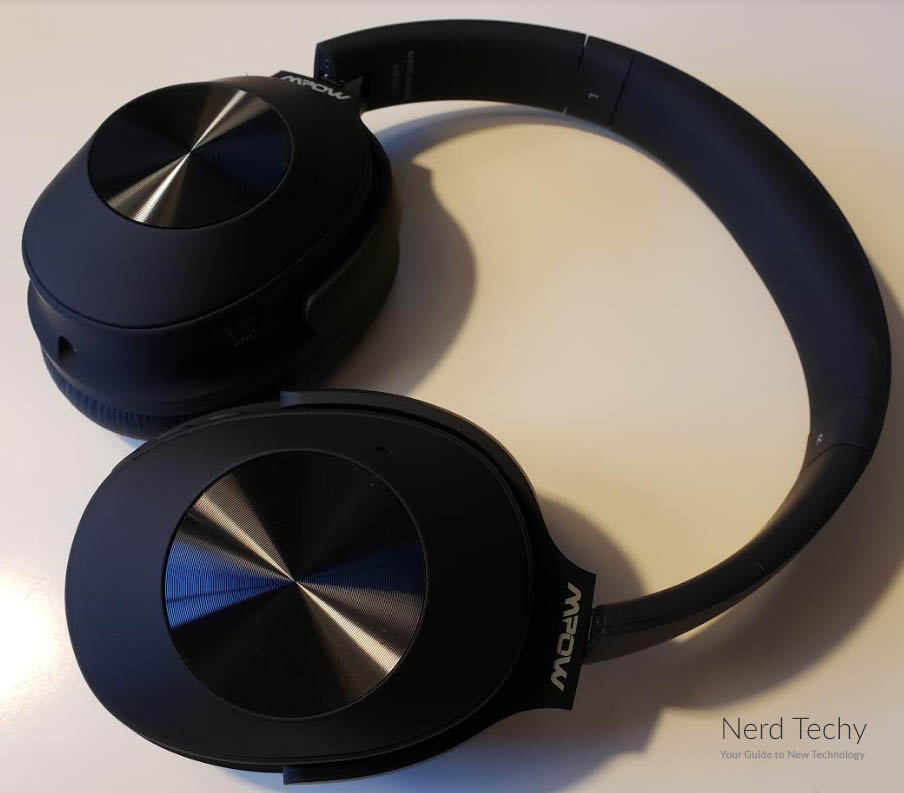 Though it does end up taking a toll on battery lifespan, that’s sort of the point of offering a larger 30-hour battery to begin with. You’ve got some wiggle room. Unless you’re planning on routinely making use of the 3.5mm cable, and ignoring the ANC a lot of the time, then their estimated battery lifespan is a little overblown. But in more realistic scenarios, the times you do end up with are still respectable.

The calling features add a little more value, especially for people who value call clarity above voice assistant support. And in combination with all the other things these headphones have going on, that makes the Mpow H12 probably a good pick for someone who’s consistently on the go.