The Android versus iOS debate has raged on for years. No matter what side of the argument you stand on, there is one thing we all have to admit: Each platform has both advantages and disadvantages. One of the biggest qualms users have with iOS devices is the lack of upgradeable storage.

Building a phone with an SD card slot isn’t all that complicated. Although the case of the phone will require some modifications, the hardware itself is cheap and readily available. This one simple feature means that users have an easy way to backup and restore large amounts of data with minimal cost.

With this in mind, why are there so many phones sold without an SD card slot? This problem isn’t exclusive to apple. Even Samsung has been found guilty of nixing the SD card slot in order to shave a few millimeters off the thickness of the phone. But there is actually a very good reason why SD card slots are falling out of style: Profits.

The iPhone 7 with 256 GB of memory is $100 more expensive than the model with 128 GB of memory. Meanwhile, a 128 GB Micro-SD card only costs a fraction of that. Cellphones are very advanced, and manufacturers are facing tighter margins. But when they can charge huge markup on increased storage space, they make more money. And if consumers can just go and buy a cheap SD card, there isn’t much incentive to upgrade. This business model is a huge win for cellphone manufacturers, but comes at consumer’s expense. 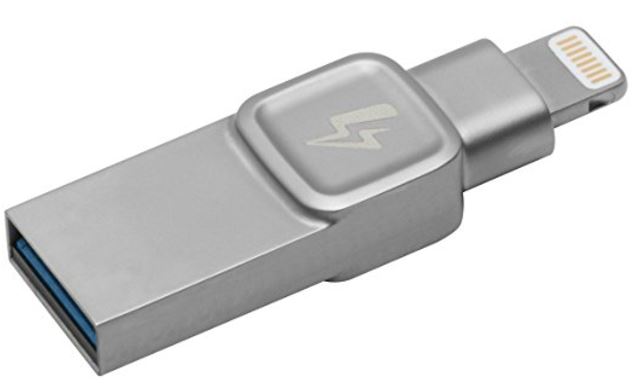 It took a long time, but Kingston has finally found a solution. Their DataTraveler Bolt Duo Flash Drive works just like a normal flash drive, but instead of a USB port you’ll find Apple’s lightening connector. This allows the drive to plug directly into any modern iOS device with a connector. It does add a little bulk, but gives you the ability to carry around additional music, photos, and videos that wouldn’t otherwise fit on your phone.

What are the limitations? iOS is very different from MacOS, so we don’t expect to have the same level of access to our files as we do with a standard flash drive. To see how this new technology works, we had to go hands-on. 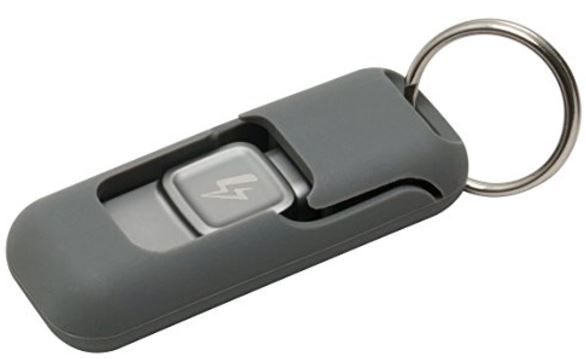 The Bolt Duo definitely has an interesting design, but this is just as much functional as it is stylish. The front of the flash drive has a standard lightening connector. On the back, you’ll find a USB 3.0. This allows you to use it with both your computer as well as your phone. Not only is it a creative storage solution, but it also makes it easy to transfer files back to your computer.

The Bolt Duo comes in three different sizes: 32 GB, 64 GB, and 128 GB. You do pay a small premium over other flash drives, but the difference is much lower than we expected.

iOS doesn’t provide users with direct file-system level access like a computer would. This means that you’re not going to be simply dragging and dropping files, apps, and games to and from your phone like you’re used to. In fact, Apple doesn’t even provide direct API access to using the lightening port for data transfer. Instead, Kingston had to develop something in-house. 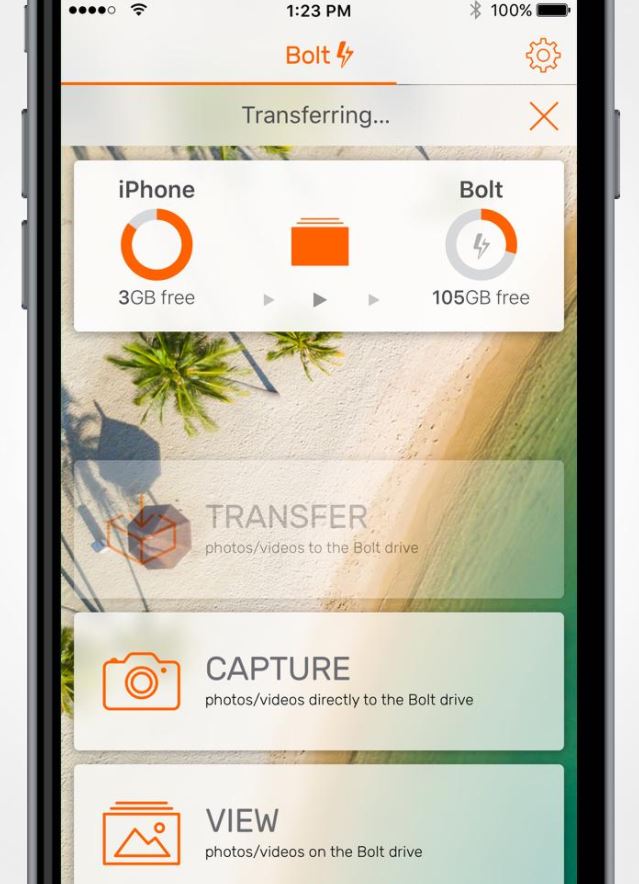 Their system is actually quite brilliant. The entire system is controlled from Kingston’s Bolt App. Apple does allow applications to edit the camera roll. When you open the bolt app, it connects to your camera roll and provides you with the ability to perform a one-touch backup of all the files found. The first backup covers every image you’ve got on your phone. Subsequent backups only add the new images and videos that have been saved.

The Bolt app is capable of maintaining separate indexes for each device you use. This means that you can backup multiple phones, and still use the drive for saving other data from your computer. The backups won’t interfere with each other, letting you take full advantage of all that new storage space. 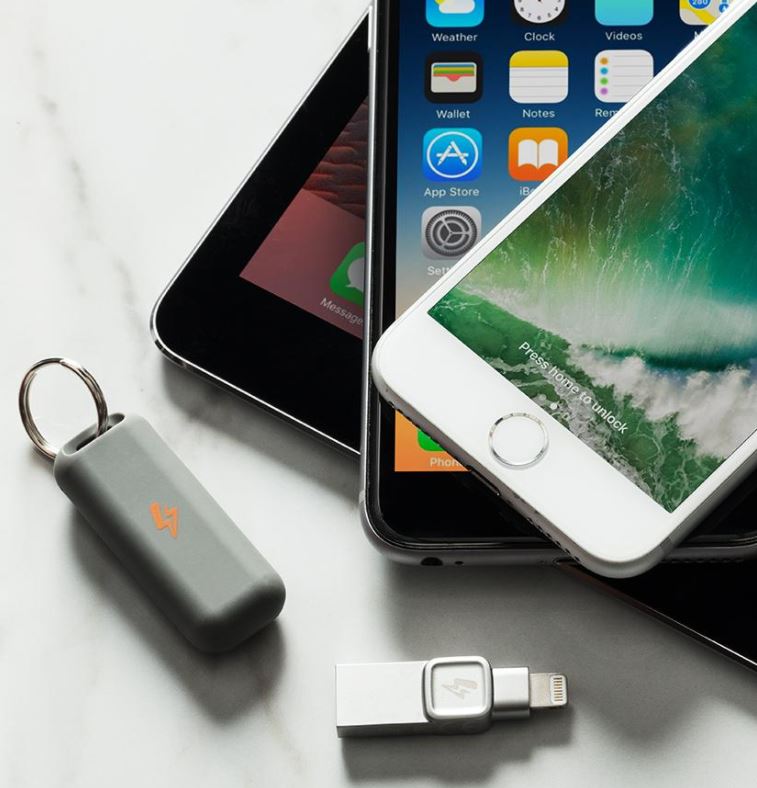 Aside from just backing up, the Bolt app gives you several other options to choose from. You can transfer the images, removing them from your phones internal memory and saving the only copy on the Bolt. This is a great way to make room for new memories without losing your old ones. You can also transfer images off the drive onto your phone, viewing them as if you had taken them with your own camera. Video is also supported, but iOS has limited support for video file formats. A video you shot yourself will work, but don’t expect that movie you downloaded online to play back correctly.

If you’re taking photos while the bolt is in the bottom of your phone, you can choose to have them saved directly to the flash drive, saving your internal memory. Overall, this software makes it easy to work with the limited storage space you may have on your phone.

The drive itself is both stylish and durable. The whole thing is made from a single piece of aluminum. The same manufacturing process is used for the backs of apples phones, as well as their laptops. This keeps the look visually consistent with the devices you’ll be using it with. Style is one of the main selling points of Apple devices, so we’re happy to see Kingston keeping up. 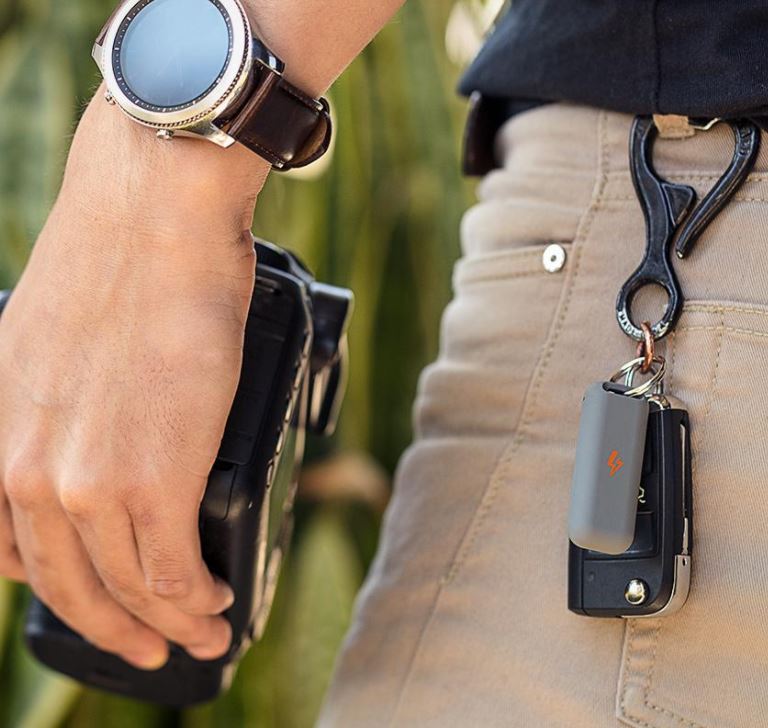 The only visual element that really stands out is the Bolt logo itself. It’s surrounded by a raised piece of metal that is embossed all around. Not only does this look good, but it gives you thumb something to grab onto while you’re inserting or removing it from your device.

The drive is extremely durable, capable of withstanding a lot of impact. It’s also quite compact, which makes it easy to carry around. Despite the unique design, you can expect the same level of quality Kingston puts into their other flash drives, leaving us with no major concerns about the drive itself.

Although this is a USB 3.0 drive, the memory chips aren’t exactly cutting edge. We performed some benchmarks on our home computer to see what kind of data transfer rates you can expect. We first started out by transferring a large amount of images from our internal SSD. This test should be pretty comparable to how you use the Duo in real life. 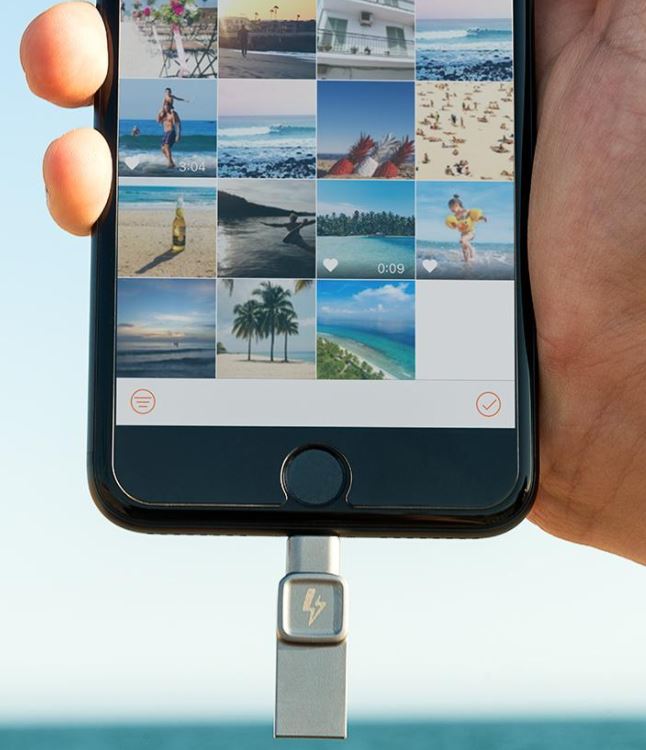 During writing, our average speed was 37 Mbps. The average photo size with our IPhone 7 is around 3 MB, so this translates to roughly 1.3 photos per second. Not too bad, but not blazing fast either. Read speed was much better, clocking in around 86 Mbps. Although these numbers aren’t mind-blowing, they’re pretty consistent with most modern flash drives. Although your first backup may be a little slow, subsequent ones shouldn’t take all that long.

Even though this is a flash drive for iOS devices, you’re still more limited on what you can and can’t do with it. You’re not able to save apps to it, nor can you handle external files. It’s suited exclusively for backing up and transferring photos and videos from your camera roll. If you’re running out of storage space because you love to hit that shutter button, this could be a good option. But if most of your space is occupied by app data, this drive likely won’t help solve your problem. That being said, external storage is never really a good solution for applications. The memory used inside an iPhone is much higher speed than what you get with external solutions, so keeping your apps internal has some performance advantages.

We’ve always predicted that Apple would one-day add external storage to their phones and tablets. What we didn’t predict was that this solution would come from a third party. Apple is notorious for keeping their platform locked down, so Kingston’s engineering is certainly an accomplishment.

The DataTraveler Bolt Duo is a fantastic solution for transferring your camera roll to and from your computer. The drive is compact, durable, has plenty of storage, and is easy to use. If you’re constantly worrying about having to delete images, we’d highly recommend the Bolt Duo.

If you’re looking for a more advanced form of external storage, unfortunately you’ll have to wait. The software currently supports only photos and videos, and there isn’t a good way to take files off your computer and put them on the phone. However, we do have a good starting point. We’re excited to see how this technology develops in the future.

What’s the Difference Between Hotspot and Tethering?
March 16, 2022