Although the first car alarm was invented in the early 1900’s, it wasn’t until they 70’s that they started to become common. At this time, car alarms were very expensive and challenging to install. In spite of the cost, the car alarm market exploded. The 70’s was an important time for car culture, and vehicles were becoming an important status symbol. With the high value of premium vehicles scattered around American cities, auto theft skyrocketed. As high end car stereos became the next big trend in the 80’s, so-called “smash and grab” thefts left many unfortunate consumers without a head unit.

At the time, the best solution was an alarm. When a loud, obnoxious sound draws all eyes to a crime in progress, would-be thieves had no choice but to run. Unfortunately, the popularity of the car alarm eventually became it’s downfall.

Do you remember the last time you heard a car alarm going off? How did you respond? It’s unlikely that you ran to the balcony to see what was going on, and you probably didn’t call 911. Today, most alarms are accidental. Today, they function more as an annoyance than a warning.

Even though car alarms might not be as effective as they once were, we still have a need to protect our vehicles. Perhaps the location of your apartment requires that you parked on the street. Maybe you’ve had to park your car in a rough neighborhood. No matter what it is you’re concerned about, Waylens has a solution. Their Secure360 camera is an intelligent video security system that promises to modernize automotive security. How does it work? Should you buy one? We took a closer look to help you answer these questions. 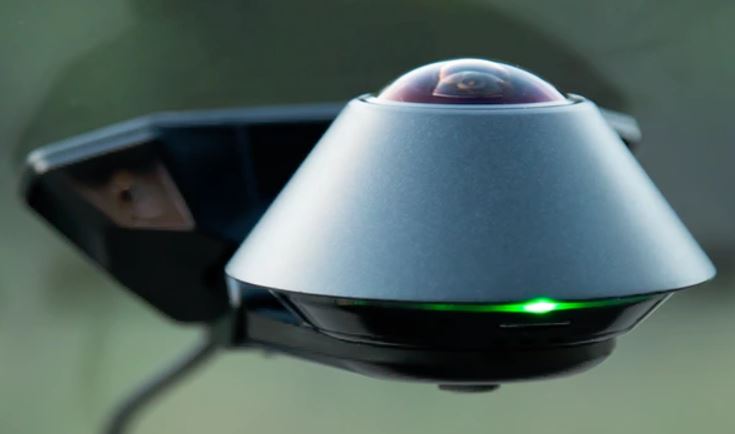 The Secure360 is a combination several popular new technologies. Like a dash cam, it mounts to your windshield and documents your time on the road. Like an action cam, it’s got a 360 degree lens that records in all directions. Like a home security system, it uses activity tracking to send you a notification the moment that something occurs.

The technology itself isn’t exactly revolutionary, but the way these technologies have been used is incredibly innovative. 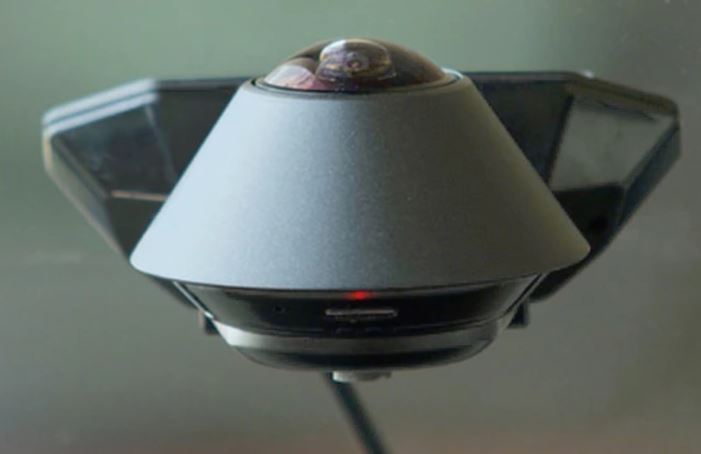 The first thing you need to do is mount the camera inside of your vehicle. Dash cam placement is always a challenge. On the one hand, you want the camera to have a good view of the road. On flip side, you don’t want it to obstruct your vision at all. Fortunately, the design of the Secure360 makes it easier to position than any other dash cam.

It’s got a large, somewhat rectangular, base that attaches directly to your windshield with a double sided mounting pad. This gives it a very firm mount, so it won’t fall off or move around. The camera itself is cone shaped. It sits directly in front of the mount, with the optical lens sitting just about the mounting point. 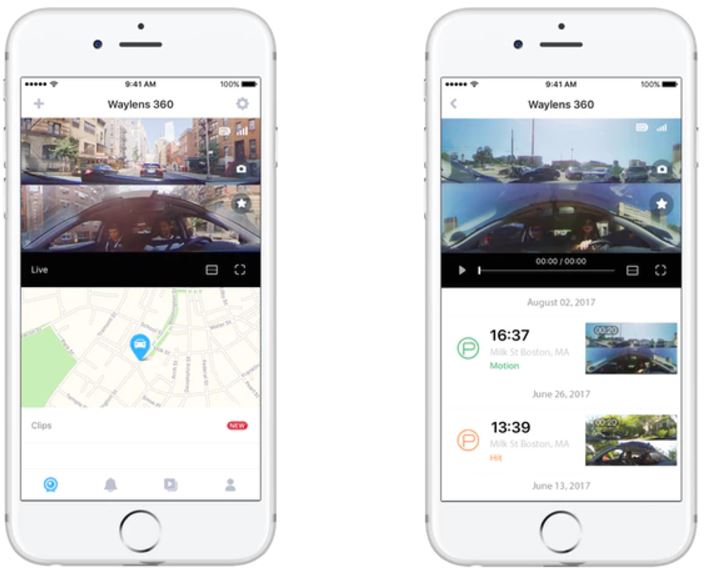 Because it records in all directions, you can place it wherever you want. We do recommend placing it on the front windshield, as this is where an accident is most likely to occur. You also want to get a good view of the doors, so any thefts can be recorded. You can stream from the camera and see how the video looks before you stick it. Once you’re ready, just peel the plastic cover off and hold it in place for a few seconds.

Next, you’ll have to supply power to the camera. It comes with a power lead that connects to any auxiliary power source in your vehicle. You can wire it into the dash or fuse box, or you can use the cigarette lighter adapter if you aren’t comfortable doing any electrical work. The wiring can be a little more involved, but this gives it a very professional installation.

The last thing to do is get your 4G network up and running. When the final version is released, you’ll be able to purchase the data package direct from them. Pricing should be around $15 per month, although this hasn’t been established yet. 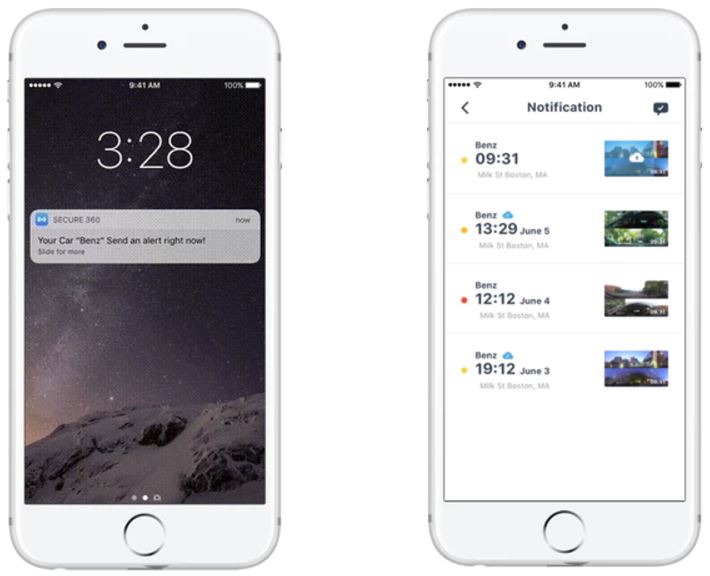 With any automotive device, power use is always an issue. Have you ever left your lights on and woke up to find your battery dead? Car batteries aren’t designed to have sustained current draw for a long time. This is why most dash cams tend to shut themselves off when they’re not in use.

The Secure360 found a creative solution that allows it to stay on 24 hours a day. The camera and 4G modem are only on when it’s recording. When it’s just observing, it uses external sensors to detect motion. These sensors use very little power, and can safely draw from your cars battery for months. There is also a low voltage shut down, which disables the camera before it kills your battery. As long as you drive the car a few times a week, this should never happen. For consumers who will have their vehicle sitting for long periods of time, Waylens plans to offer an external battery pack. 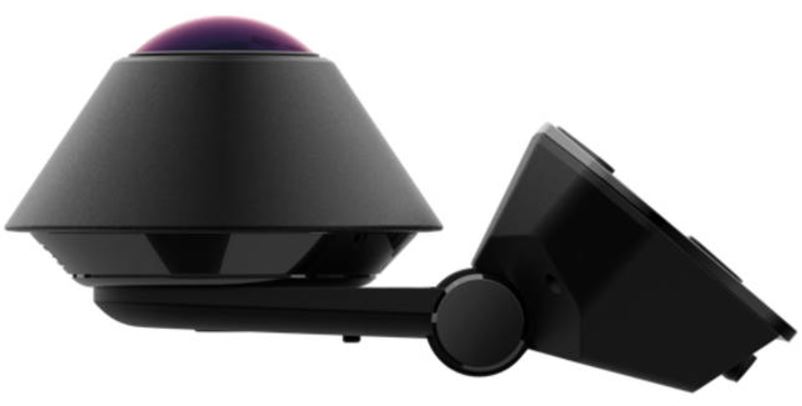 Now that you know how to get the Secure360 installed, you’ll be able to use it. It has two different operation modes: Driving and Parking. There is no manual control required. It automatically turns itself on when necessary and selects the mode based on information from its sensors.

Driving mode is just like a dash cam. It records a constant string of video as long as the car is turned on. This data is all uploaded to Waylens cloud and analyzed. Any time abnormal movement or activity is detected, the video is flagged. You can use the free app to view a highlight reel of any clips that the camera detected as being abnormal. Alternately, you can just view the whole drive as a standard video file.

Parking mode works a little differently. The camera is technically turned off, although several sensors are actively monitoring the environment. If a bump, collision, or break in is detected, the camera boots up immediately. A notification is sent to your phone, allowing you to review the clip or start a live video. When a break in is detected, several lights illuminate the camera so any would-be thief knows that they’re being recorded. 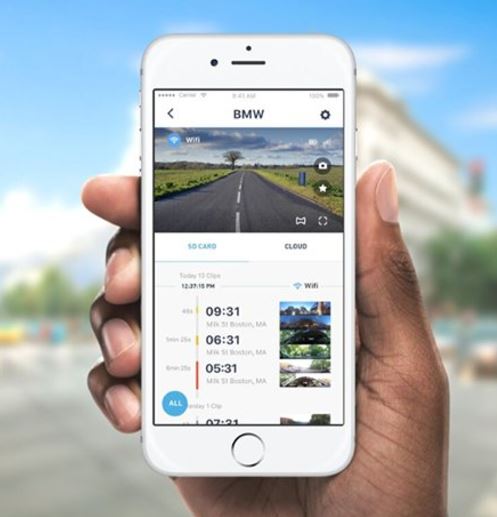 Video is stored in the cloud for 24 hours. You also have the ability to install a MicroSD card directly into the camera. If done, it will save all recorded video to the card until it’s full. Once there is no more space, it starts recording over the footage starting with the oldest.

The camera also includes a GPS, which allows you to identify the locations that incidents took place. In the event your car is towed or stolen, you’ll be able to use GPS data to track it down.

The Secure360 uses a very high end image sensor that consists of an f/2.0 aperture lens with 7 glass elements. This keeps the video incredibly sharp and detailed, while allowing a large amount of light to hit the sensor. This light is transmitted to an ultra-sensitive HD video sensor that works well in both light and dark.

In fact, this sensor has a much higher dynamic range than the cameras you’ll be used to. On the one hand, images appear a little washed out and lacking in contrast. The upside to this is that almost everything is in focus. Rarely will you find something too dark to make out, or too bright to see. You just get a flat, detailed video of the world around you.

360 video is recorded in a common TS format. When you review it, you’ll see a normal field of view. You simply swipe your finger around to refocus, letting you enjoy the video just like you would from a standard camera.

There is no SD card included, and your cloud storage is somewhat limited. If you plan on using this camera primarily as a security system, this probably won’t bug you that much. But if you want to use it as a dash cam, you will definitely want to pick up the biggest SD card you can find. This camera has a premium price, so it would have been nice to see an SD card or even some internal storage included. 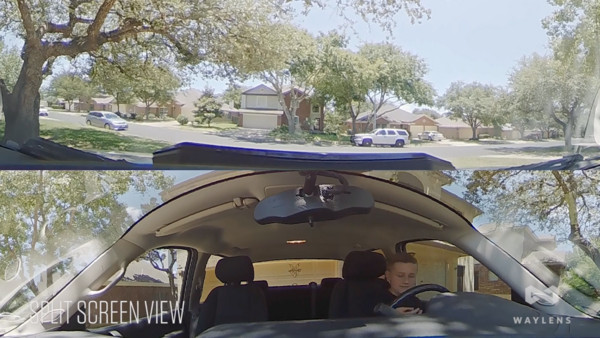 The Waylens Secure360 is a great example of how smaller companies can innovate. There is no single component in this camera that is revolutionary, but the end result is. They simply took hardware that already exists and found a way to create something unique and effective.

The advantage over standard car security systems is that this platform will help you address the small incidents. If you’re involved in a hit and run, a victim of vandalism, or the target of a petty thief, the Secure360 will give you the video you need to bring to the police and your insurance company. In the event that your car gets towed away, you’ll be able to track it down or even dash out to the lot before you’re hauled off. These kind of problems that we are most likely to experience, and having some piece of mind is incredibly valuable.

If you’re the victim of a more serious crime (such as auto theft) you’ll be able to use the GPS to track your car, and you’ll have a video of the perpetrator. It’s also infinitely more useful as a dash cam because you can capture video from all angles. You’re paying a little more for this unit, but you’re getting something that blows every other dash cam we’ve used out of the water.