Steelseries, Razer, Turtle Beach, we could go on for pages listing all of the manufacturers of gaming headsets. There is so much competition in the market from companies that have already made a solid name for themselves, you’d wonder if there was even room for another competitor?

When Kingston came onto the scene with their original Hyper X headset, they blew everyone away. Kingston is not well known as a manufacturer of audio devices. Sure, they make memory, solid state drives, and even USB memory keys. But audio? That’s a bit of a stretch, and a little unusual for the company.

And yet everyone was blown away. The headset was incredible. Fantastic audio performance, great build quality, and a cool looking design. But then again, we’ve seen companies make a splash with their first generation product, only to cheap on the second generation in an attempt to capitalize on the hype (Skullcandy, anyone?).

Now that Kingston has upgraded their famous headset with the latest Cloud Stinger model, let’s take a look and see how it compares to its predecessor. 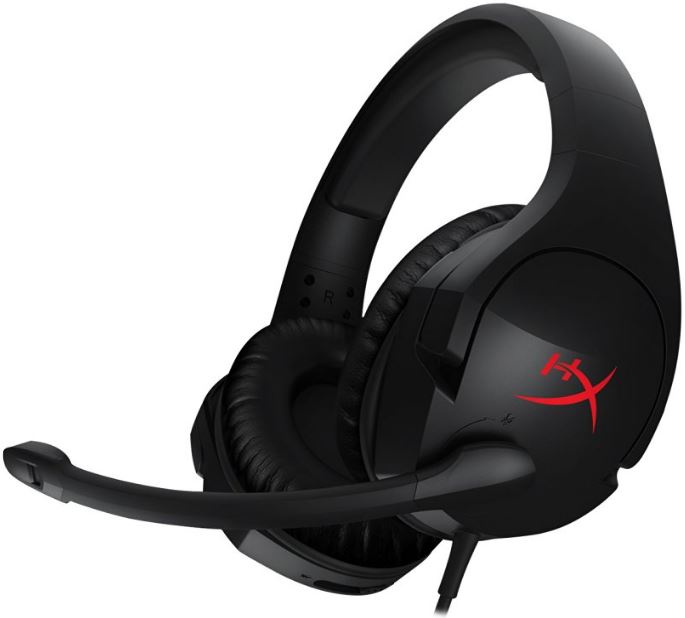 In the photos, the Kingston HyperX Cloud Stinger Gaming Headset looks like a pretty beefy headset. Surprisingly, it feels incredibly light when you pull it out of the box. That’s not to say that it’s cheap, because the whole unit feels incredibly solid. It’s just surprisingly lightweight. The entire un-boxing experience is quite pleasant, actually. Like the previous models, the headset is packed very well. Opening up the box feels a little like Christmas day, similar to when you open an Apple product. 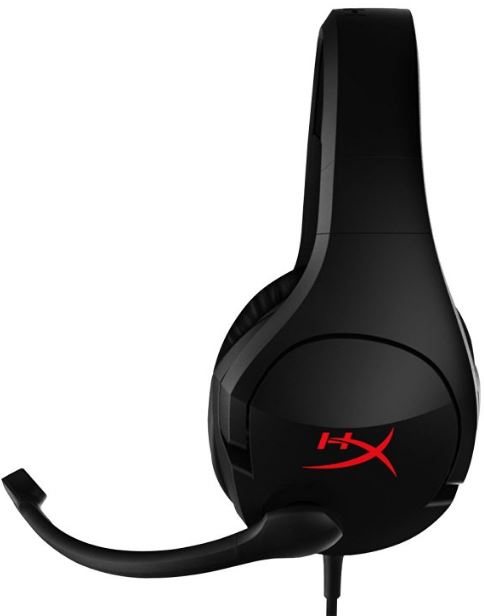 Like so many previous gaming headsets, the HyperX Cloud Stinger has an aggressive design. But instead of going for pure flash, the headset is a little more reserved. The appeal of the headset comes mostly from the sharp lines, although the logo really stands out on the side.

The headset looks a lot like one that would be used professionally by a pilot. It looks like it means business. When compressed, the headset looks almost like a single cohesive unit. This appeal is lost a little if you need to adjust the length of the head rest, as you’ll expose the internal metal bars. 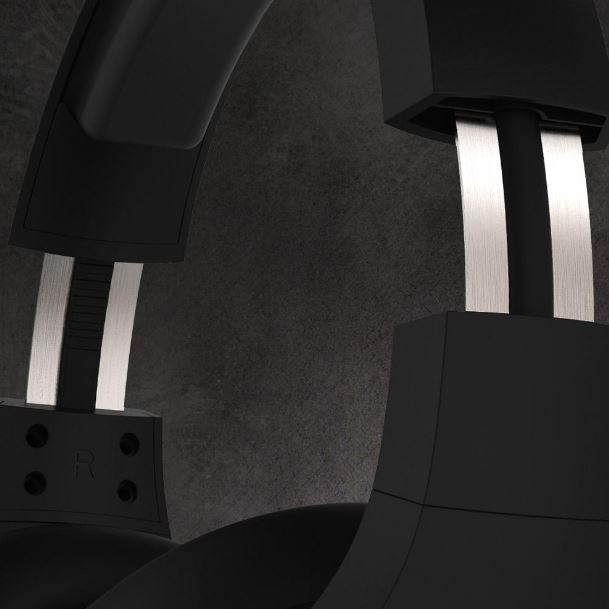 Overall, we were really happy with the design of the HyperX. So many headsets tend to go a little over the top with their flashy design elements. But the HyperX is well thought out. The subtle design influences go a long way to promoting itself as a headset suitable for serious gamers.

We were a little worried when we first caught wind of this headset. The previous cloud headset had an all metal construction. There are a lot of cheaply made plastic garbage on the market, so the concern that Kingston had cut corners on this model was real. However, it turns out that the plastic is very well made. It’s rigid in design, but flexible in all the right places. 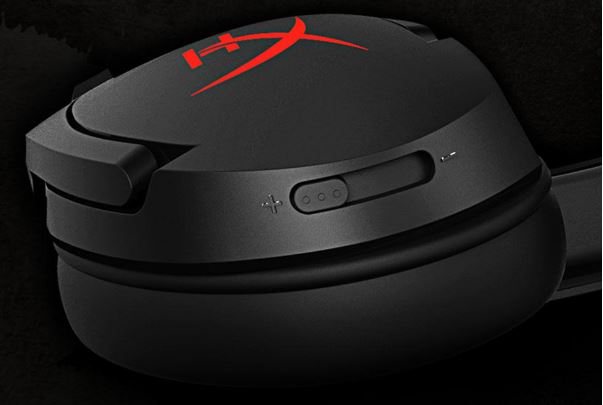 Extending the headset outwards, you’ll notice that there are two metal bands that extend the length of the headband. This metal internal construction goes a long way to demonstrate the durability of the unit as a whole.

Anywhere there is movement, the headset compensates with rigidity. The ear cups bend from side to side to accommodate different head shapes. But if you remove them, the ear cups don’t flop around like some of the economy models. Movement is smooth, tight and controlled. 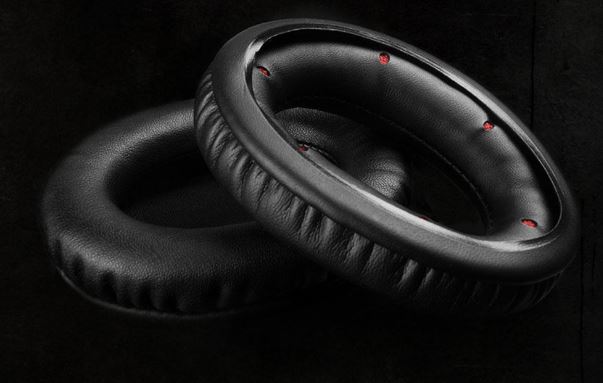 At first, we were impressed that the headphones were simply as durable as the older aluminum model. However, the plastic ones are actually significantly more comfortable. Metal is certainly durable, but it is very heavy. The plastic material doesn’t really sacrifice any durability, but it feels much better on your head. They’re light and airy, it’s almost easy to forget you’re even wearing them.

Kingston uses a special memory foam material for the ear cups, furthering the level of comfort even further beyond what we expected. Generally, we’re a fan of the rubbery smooth material used on most headphones. As it turns out, this material is an absolute luxury for your ears beyond what we imagined. We’ve never come across a material this comfortable on a sub-$100 headphone before.

There is also padding along the head band, although it’s a little firmer than what’s on the ear cups. In fact, nearly all of the pressure is placed around your ears. This is where the metal headband supports really come in handy. Plastic doesn’t stretch evenly. This means that if you have a larger head, you’ll have a lot more pressure around your ears that somebody with a smaller head. With the metal bands, pressure is pretty much even no matter how large or small your head is. 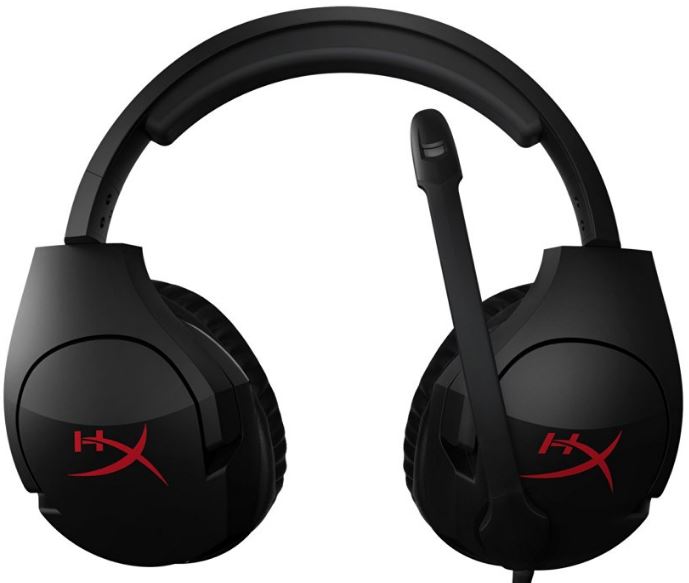 Just like every other aspect of these headphones, the sound quality is absolutely impressive for such an affordable headset. The bass is tight, clean, and impactful. Clarity is unparalleled, with every little detail of the sound coming through clearly and undistorted. The biggest driver of this is the massive 50mm drivers, which are capable of producing a high level of output without suffering from distortion.

A great technology they used in these headphones is directional drivers. Generally, this is only used in the simulated surround sound models in order to project the sound from different areas of the ear cups. In this circumstance, sound is only produced in stereo. What the directional drivers do is actually point the sound waves directly into your ear canal, instead of flush with the side of your head as usual. The human ear is actually designed to hear better from the front, when compared with sounds coming up from behind them. Having the drivers faced more to the front actually makes them a lot more effective. The sound is presented more clearly, and at a higher volume without actually having to be physically louder. 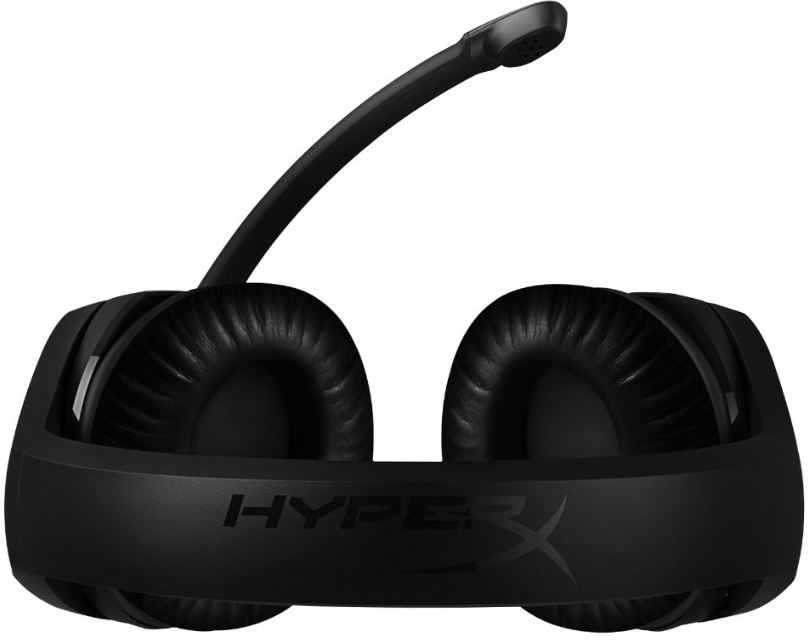 Although a solid microphone, the HyperX Cloud Stinger is capable of accurately picking up audio from any direction. This mic is very similar to the ones used in teleconferences, were a device will be placed in the center of the table and need to pick out sound from people sitting at different distances from the device itself. This means that you’ll never have to adjust the positioning of the mic on it’s own, everything is done automatically. 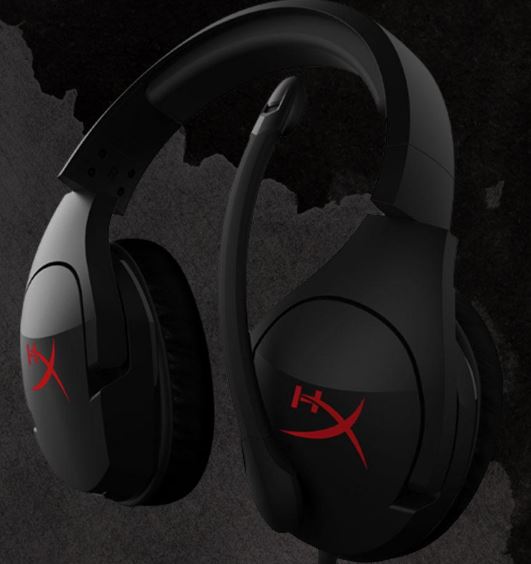 The mic is adjustable from the ear cup, so you might thing that you’ll have to control the volume on it’s own. This dial actually changes how loud you hear your own voice. So if you’re in a noisy environment, you can crank up your own voice to hear yourself better. This has no effect on the actual mic pickup, which is optimized automatically.

Gamers might want to mute their headset from time to time. Instead of fumbling around trying to find the mute button and hoping that you pressed the right one, muting the microphone is easy on the HyperX Cloud Stinger. All you have to do is flip the mic up, and it’s muted. Flip it back down, and you’re back in business. 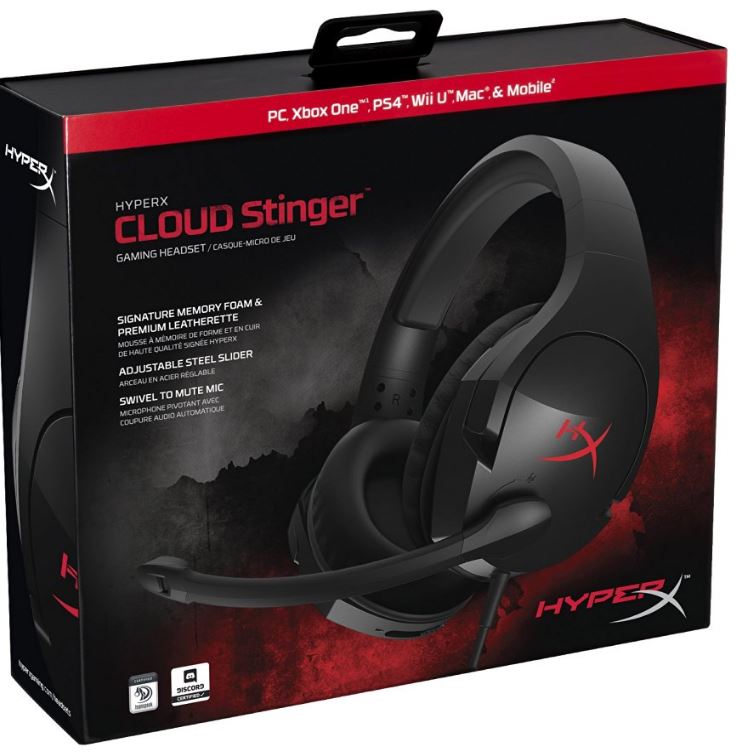 One of the best things about the HyperX Cloud is its full compatibility between a wide variety of systems and platforms. You can use it with virtually any gaming console such as the Xbox One, PS4, Wii U, and even mobile devices. Since it’s equipped with a standard 3.5mm stereo plug, you can plug it into basically anything that has an input for a pair of headphones. 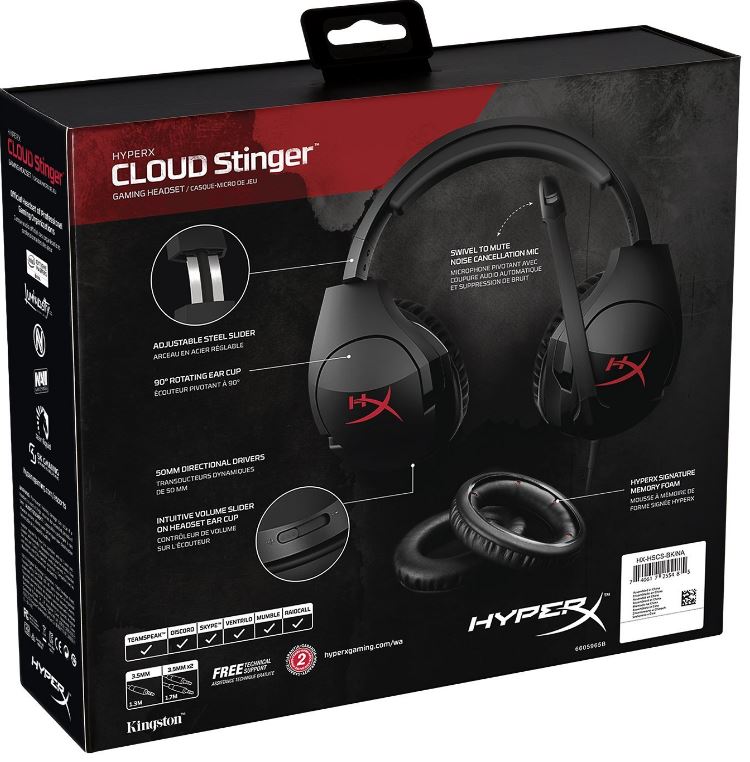 So, Should You Buy the HyperX Cloud Stinger?

This headset is perfect for gamers who want a higher end model, but still don’t have a lot of cash to spend. We rarely see such a great deal on a headset, so it’s clear that Kingston is still trying to prove themselves as a worthy competitor in an already crowded market.

If you have any qualms about trying out a headset from a lesser known manufacturer, rest easy knowing that every single headset Kingston has released has received absolutely nothing but glowing reviews. We can’t promise that everything Kingston releases in the future will be as good a deal as their current offerings, but we can certainly promise you that the HyperX Cloud Stinger is a purchase you absolutely won’t regret.