Wi-Fi dead zones are annoying. What’s worse is knowing the quality of your signal is actually improving or decaying from one room to the next. Whether you’re at home or out getting coffee, Wi-Fi woes are almost universally a miserable experience. Mesh routers were made to solve those types of problems, by extending your Internet connection to new spaces, and strengthen the signal where it already was present.

Moreover, mesh routers are typically equipped to help handle higher throughput. Not just in terms of data, but in terms of the number of people who are connecting to the router and contributing to network congestion. Choosing the right mesh router can make these problems go away, but it’s quite easy to unknowingly pick the wrong router and waste a ton of money in the process.

NETGEAR recently released the Nighthawk X6 Tri-Band Wi-Fi Mesh Extender EX7700. It’s the third of NETGEAR’s Nighthawk mesh extenders, which is an important detail. Before the release of the EX7700, NETGEAR offered only the introductory-level Nighthawk EX7500, and the high-end Nighthawk EX8000. People who were looking for a middle ground had no choice at all within the NETGEAR brand. And considering how ubiquitous NETGEAR is as a brand, that’s been particularly unfortunate for people who strongly prefer their networking products. 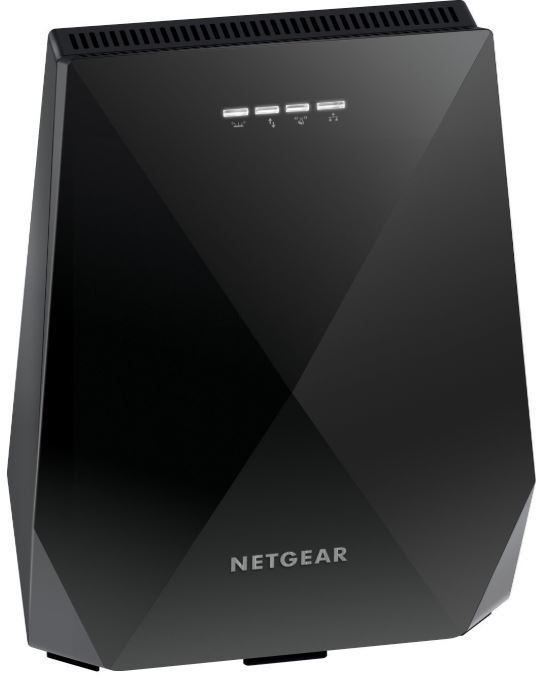 But the EX7700 fills that gap. Compared to its cousins, the EX7700 is right in the middle. It doesn’t have the same incredible range and throughput as that of the 8000 series, but it’s certainly a clear step above smaller mesh routers which are built for moderately large homes. The Nighthawk X6 supports two 802.11AC antennas, supporting 866Mbps on the 5GHz band and 400Mbps on the lower 2.4GHz band.

Moreover, the EX7700 operates as a triband extender, giving it the capability to dedicate one of its antennas solely to handling back-end networking tasks. The remaining bands are free to provide Wi-Fi that doesn’t start to slow down the moment too many people log-in to the network. Whether you’re running a giant Internet café, or you’re simply trying to stream 4K in your garage, the EX7700 is built to perform well. 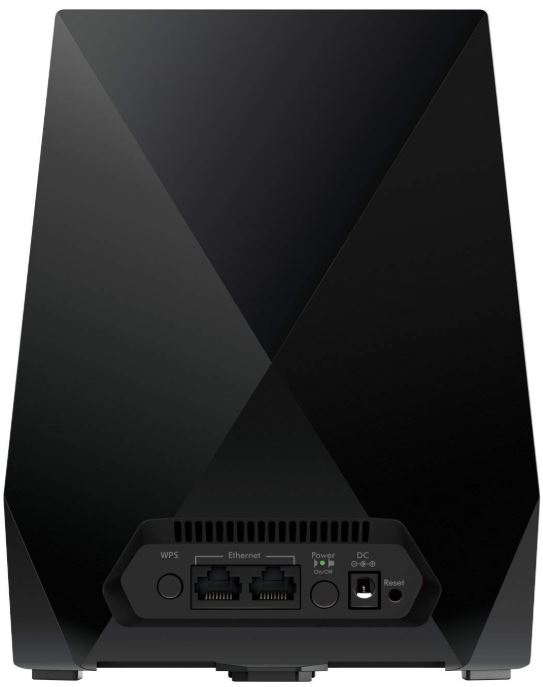 From a superficial standpoint, the Nighthawk X6 EX7700 appears about average amongst mesh routers. Through the triangular angles on either side of the device does give it a distinctive look, which visually separates the Nighthawk X6 from its less impressive non-mesh counterparts. Unfortunately, the X6 EX7700 doesn’t include the ability to mount the unit on the wall. But that’s a feature more likely to be used on an industrial tier router than the Nighthawk X6, so it’s easy to forgive.

Additionally, size shouldn’t be a grave concern because the highly compact 7.8 x 6 x 2-inch build, which is no more or less intrusive than any other router you’ve ever owned. Weighing slightly more than one pound, the Nighthawk X6 is about as easy to move around as any other router as well.

On the backside along the base of the X6, you’ll find a WPS button, two Ethernet ports, the on/off button, reset button, and DC power-in port. The presence of the on-off button is noteworthy for someone who is thinking about posting the X6 in a public place. But beyond that, this is the standard setup you’ve probably come to expect on any router. 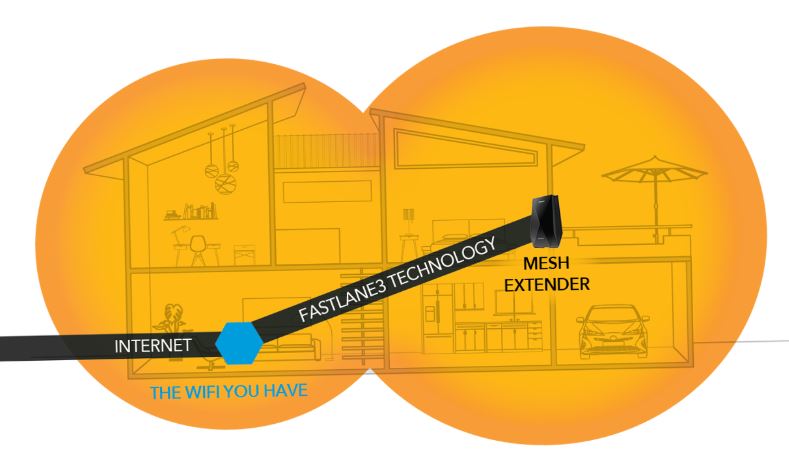 The NETGEAR Nighthawk X6 uses a push-button setup. Whether it’s your first time setting up a network, or you’re an experienced technician, it only takes a few minutes to complete the entire process. And it’s just as easy for integrating the X6 into an existing network. That makes the X6 great for generating a seamless Wi-Fi network with as little signal loss as possible, without needing to replace an existing router.

Setting up the network isn’t the only easy part. On the backside of the EX7700 you’ll find two gigabit auto-sensing network ports. These are a kind of smart-port which prevent you from having to spend hours troubleshooting the reason why you can’t get your electronics to find your network. They’re as much a feature that helps the NETGEAR brand as much as it helps consumers because NETGEAR will have fewer technicians tied-up helping people with trivial installation problems. And it certainly makes things easy on you.

NETGEAR isn’t exactly a new name in the router business. This may be only their third mesh Nighthawk router, but they’ve been making these kinds of devices for decades. And during that time, they’ve made an endless series of small refinements that make it easier and easier to setup your network.

Best of all, this ease of accessibility hasn’t come at the cost of higher customization. You can still adapt the X6 to serve the unique needs of your network, whether you’re a highly skilled technician or an ordinary user browsing through setup wizards. For both basic users who barely know how to name their network, to users who are manually opening ports on their PC, the X6 services both.

Like all of the Nighthawk mesh extenders, the EX7700 uses standard 802.11AC Wi-Fi. With its slew of onboard antennas, the X6 is capable of extending the radius of a network out towards 2,000 square feet. And compared to the 7500 and 8000 series, that’s about right in the middle. If you’re to fill a warehouse with Wi-Fi, you might want to consider switching to the EX8000. And if you’re in a smaller home with a smaller Wi-Fi problem the EX7500 might be your best bet.

But most people will want the EX7700. Even if you don’t need 2,000 extra feet of connectivity around your home, the increased signal strength you’ll get from having that kind of power is what it takes to keep a signal steady. As the 2.4Ghz and especially 5Ghz band connection deals with obstacles like insulated walls, those connections suffer. In the absence of perfect Wi-Fi conditions, you don’t want to use 49 feet of a 50-foot connection.

Where the X6 starts to diverge from an ordinary router is in the Wi-Fi bands. The tri-band AC2200 is about as adaptable as a router can be. The first band is a 400 Mbps connection over 2.4 GHz, while the second and third bands are a pair of 5GHz, 866 Mbps connections. Whether you’re right next to the Nighthawk X6, or if you’re pushing the boundaries of your network, you end up with steady performance from one band to the next.

One more thing to note about the performance of the X6 is its use of a secure boot feature. Software signed with NETGEAR is required to run the device. In short, what this means is that tampering with the EX7700 from the outside is extremely difficult if not impossible. By contrast, for authorized users, the X6 supports a convenient access point mode. That allows you to connect multiple wired devices through one shared access point, keeping the X6 speedy and safe without sacrificing network performance.

But what really boosts network performance is the onboard quad core processor. The Nighthawk E6 is pretty clearly made for 4K streaming and lag-free gaming environments. Whether you’re currently using 4K content or not, it’s built with a forward-looking design that’s ready to solve whatever Internet bandwidth concerns might come along over the next decade. 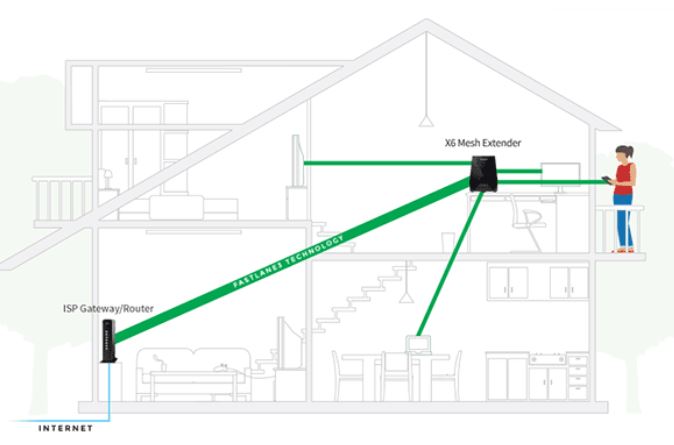 Someone joins your network and starts using the Internet. Your game starts performing worse. How can this happen? Surprisingly, you don’t need someone to start a huge download for their presence on a network to ruin your connection. Bandwidth isn’t the only place that a router can run into difficulties. As more and more people join a network, routers become less and less capable of handling each individual interaction in a timely manner. In the world of gaming, that can translate into palatable differences in performance.

That means even if you’re not using a Gigabit Internet connection, you may be able to see advantages in implementing the NETGEAR Nighthawk X6. For example, suppose you’re connecting with a more pedestrian 10Mbps connection. Having eight devices on occasionally pinging your router can create network congestion every bit as much as starting a massive download, or streaming from several PCs simultaneously.

As more and more devices connect to a router, the router will start to slow down. Even if every device on the network is only using a small amount of data, performance can go through the floor. As most routers can only communicate with one device at a time, it’s much harder to serve six people than it is one. And these single-user routers basically work on a first-come first-serve basis. 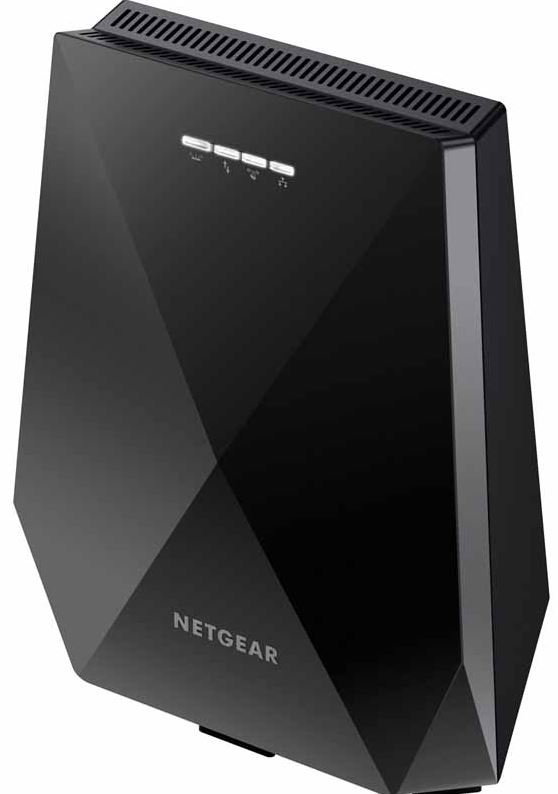 But relatively recently, a new standard was build called MU-MIMO. It’s stands for multi-user multiple-input multiple-output. Putting aside that mouthful of a name, it’s a feature which allows routers to communicate with several devices at the same time in a more efficient way.

Each device has to wait less time to access the network. In a household with 8 devices struggling for the attention of the router, the difference is something you can feel immediately. For streaming and gaming, where latency and bandwidth can be critically important, these differences can be night and day.

NETGEAR being such a big brand has its advantages. Their software support is continually updated, their security protocols are continually being improved, and those benefits are being passed right along to anyone who owns one of their products. Additionally, NETGEAR offers a standard one-year warranty on their equipment.

If you were to graph the failure rate of electronics, the graph would look like a bathtub. In other words, stuff tends to break either within the first few days, or after a decade of heavy use. Although a one-year warranty doesn’t sound terrifically impressive given the lifespan you can expect from the Nighthawk X6, it’s actually more than enough protection from a statistical point of view. 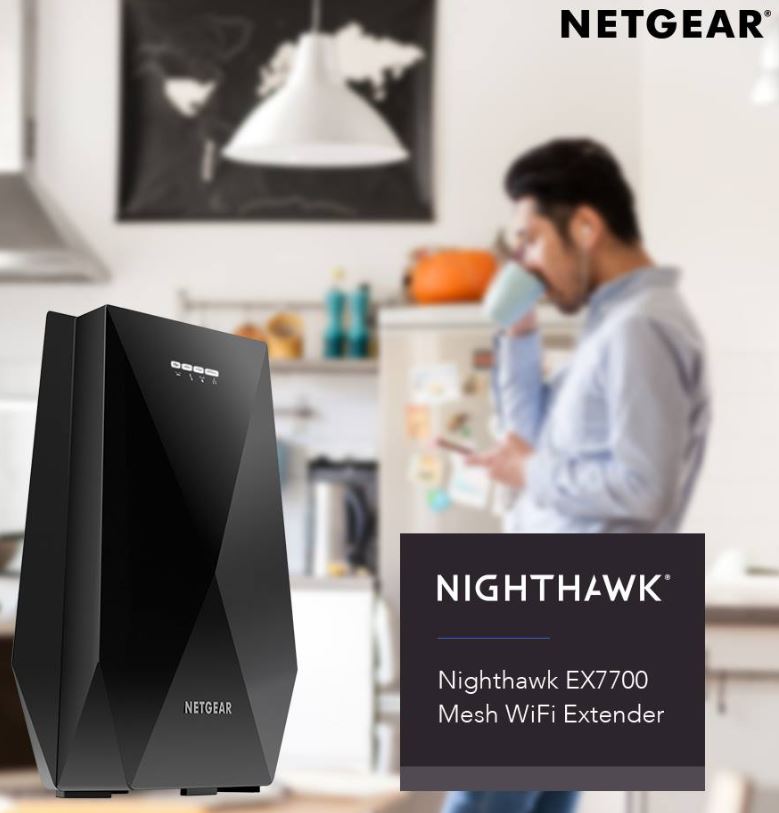 Who Should Choose the NETGEAR Nighthawk X6 EX7700?

The X6 offers the very best of a tri-band Wi-Fi connection. It has one band specifically designated to the role of signal extender, ensuring your bandwidth doesn’t get tanked as you connect to multiple devices. It can cover an impressive 2,000 square feet, making the Nighthawk X6 EX7700 a good choice for people who are trying to extend their connection to virtually anywhere except giant warehouses.

And the X6 it uses a one-name Wi-Fi connection to ensure you your network doesn’t get any more complicated once you’ve joined a mesh network. For its pure simplicity, the X6 is easy to recommend to essentially anyone, with any level of technical ability. For bigger networks and bulkier bandwidth, the onboard quad core processor can help ensure your streaming and gaming go on without a hitch. And the added layer of security through the NETGEAR Secure Boot feature is nothing to scoff at.

All in all, the X6 is a good choice for almost anyone. As long as you’re not using exceptionally large or exceptionally small spaces, it should fit just right. If you’ve had problems with Wi-Fi dead zones or frustrations with weak connections towards the edges of your network, then the X6 can definitely help.