Remember when you got your second Android phone? If you’re anything like us, you remember being glad that you still had the charger from your old phone kicking around. Having two Micro-USB chargers makes them easy to keep track of. You can store one in your bedroom, and another in the kitchen, living room, or even in your backpack for filling up your batteries while on the go.

Things are a little different these days. We don’t have just one device; we now have several. Our phones, our tablets, and even our watches all require a nice, stable supply of 5V power every night.

Fortunately, most of these devices come with their own chargers. The downside is that our bedside table can become a bit of a mess. We need power strips and distributers, and we’ve got a mess of wires running to all of the devices that we need to use the next day. If you’re managing a fleet of devices, this can be even more complicated.

Oddly enough, there aren’t a lot of multi-device chargers on the market. Sure, there are plenty of chargers that have two USB ports. But what about three or more? What’s worse, many of the devices that have two USB outputs can’t run both at full power. One will provide the 2.4 amps that modern phones need, but the other can only supply 1 amp or less. It might seem like the manufacturers are just being cheap, but there is good reason for this. Developing a large scale power supply system is a lot more complicated than you think. Manufacturers have plenty of hurdles to overcome, and poorly designed devices can actually be dangerous.

NTONPOWER has produced one of the few highly reviewed multi-device chargers on the market. With 10 USB ports and a total of 120 watts of power, it’s pretty easy to see what it’s so popular. But has the manufacturer successfully overcome all of the challenges with developing a stable platform? To find out, we decided to test it out for ourselves. 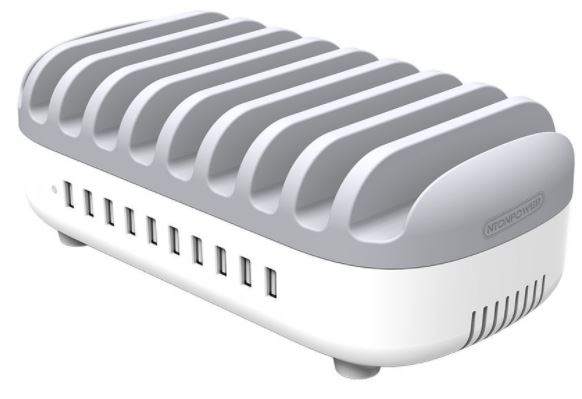 The NTONPOWER Charging Station features 10 separate USB ports all of which can simultaneously output 2.4 amps of power. The charging station is a large table-top design that features side mounted ports and a top mounted storage fins. This dock features auto-negotiation, allowing all devices to charge at their optimal current. This provides superior compatibility, with minimal risk to hardware.

In addition, they have several accessories available including cable ties, and multi-packs of Apple and Android charging cables. This docking station is designed for use in malls, educational environments, corporations, and consumer’s homes. It’s priced several times higher than some of the cheaper alternatives, but still manages to be one of the best-selling models on the market. What is it that justifies the higher price? To find out, we had to test it for ourselves. 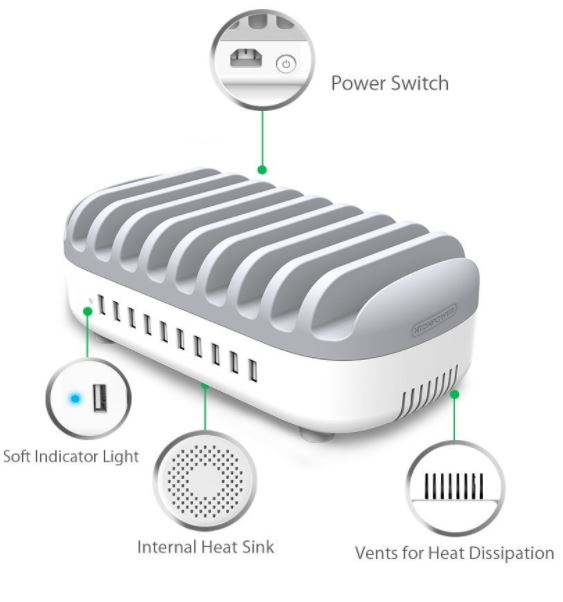 Appearance isn’t everything, but it can certainly be an asset! In this case, NTONPOWER has opted for a design that is just as functional as it is stylish. The large wide base sits atop four rubber stands that help keep the dock elevated off your table top. This allows for improved cooling for the circuitry below, and also prevents it from moving around.

The top fins look a bit like a heatsync, but they actually serve a much higher purpose. These fins are designed to allow you to store your phones or tablets on top. They rest gently between the wide fins and sit at a slight angle. Tilting them backwards ensures that the only pressure is applied to the bottom corner as well as the rear side. Your screen is completely untouched, ensuring that no dirt or debris is transferred. If the phone is bumped or nudged, this also helps prevent pressure points that could crack your screen.

Just as there are a total of 10 ports, there is a total of ten grooves to store your devices. They can facilitate smaller phones as well as tablets up to the size of an iPad pro. The two slots on either side are better suited to smaller devices, as they are a little more compact. That being said, they are still fairly universal.

You’ll find the 10 USB ports on the front. On the rear you’ve got a power switch – the clicky kind. It’s depressed inward when the device is on, and sticks out when it’s off. This makes it easy to tell at a glance when the charger is powered up. This circuit also is important for isolation, which we’ll get into shortly. There are cooling vents on the bottom and on the side. When the charger is powered on, you can hear a fair whirring of a fan moving air across the coolers. Overall, this design is simple but features all of the elements we look for in a high end charger. 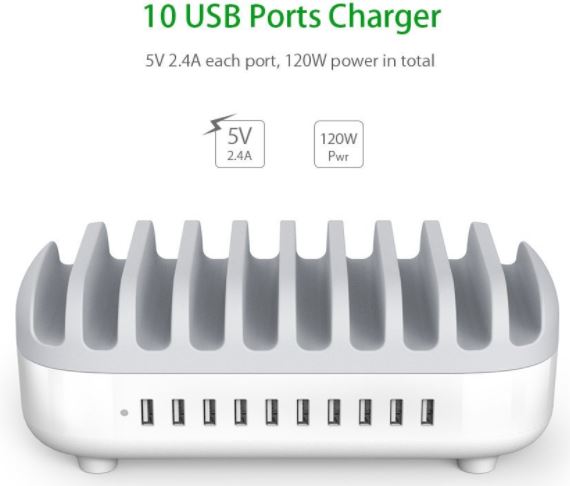 Before we get into too much detail, we first have to explain why it’s important to have a high quality circuit. Have you ever purchased one of those cheap $1 or $2 USB chargers off eBay? How long did it last? If you used it with any regularity, the answer is probably “not long.” Not only are these poor quality chargers unreliable, but they can also be a death trap. There are two reasons for this: Isolation, and distribution.

In any of these chargers you’ve got two power sources. You’ve got the mains power, which in North America is 120V alternating current. Not only can this power be dangerous, but it can seriously damage your mobile equipment. You’ve also got the 5V DC power. In low amounts, this power isn’t really dangerous to humans. However, in the case of a multi-device charger, it can be harmful to your hardware. Each power supply puts out 2.4 Amps. If the power isn’t adequately managed, accidentally dumping 24 amps (the full output current of the charger) into a single phone is likely to damage it beyond repair.

You shouldn’t try this at home, so you’ll just have to take our word on it. If you were to stick a fork into a power outlet, you’d see a spark. This is because the difference in charge (also known as voltage) is very different from the fork to the outlet. The outlet is highly charged, while the fork is neutral, and likely provides a source to ground through your body. When the fork gets close enough, the power jumps from the outlet to the form, right through the air. This is what a spark is, as well as what lightening is.

In cheap compact chargers, you often only have a few millimeters of space between a circuit path that carries 120V AC and one that carries 5V DC. If a component was to fail, you could easily get fully mains current into your power supply.

This charging station has several forms of isolation to ensure that the 120V circuit path never comes into contact with the DC circuit path. There is plastic insulation around the transformer, and the 12V and 120V circuits are physically separated from the left and the right side.

Additionally, the power deliver system is designed with failsafe hardware. Each USB port has its own distributor. If overloaded, the circuit will simply heat up absorbing any excess power. Upon final failure, the circuit will simply become inoperable. This sounds bad, but it’s really a last resort. Any electronic devices has the chance to fail. The fact that it’s designed to fail in a way that isn’t harmful and won’t damage any of your electronics is incredibly important. All of this hardware is expensive, justifying the price. While it might not seem worth it at first, it’s important to consider that every large American brand like Apple, Samsung, and Dell use the same kind of hardware to ensure that shoddy chargers won’t hurt their brand. You can get away with buying cheaper hardware for a short time, but you’re gambling with your hardware.

While the power circuit was designed to be resilient to wear and tear, there are also several other conditions that have to be addressed. Most of these can be classified as external failures. What happens if there is a power surge? What happens if consumers accidentally plug in the wrong AC adapter? With this charger, the answer is nothing. It’s got several failsafe included.

These safety features along with the reliable design allowed this charging station to receive three different certifications. 3C, CE, FCC, and RoHS all have stamped their seal of approval on this device. CE certification is required to sell electronics in the United States, so this is expected. The FCC regulates the radio interference. Ever heard an odd ticking noise on your speakers while charging? This charger won’t do that. RoHS ensures that no hazardous substances are included, and the 3C certification is an overall build quality and reliability certification. Overall, you’re not going to find something this high quality elsewhere. 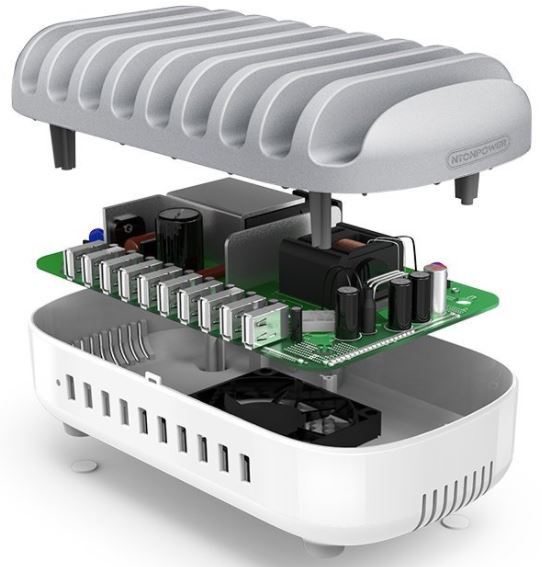 Although this is one of the best charging stations on the market, it’s not immune to faults. The biggest downside for many consumers will be the price. You’re spending a little more for all of these features, and not everyone will need something so robust. If you’re only going to be charging 2 to 3 devices at a time, something built like this is strictly overkill. However, if you’re going to be using it for long periods of time with many devices, you’ll probably find the build style worthwhile.

We’ve got one of the most highly rated charging stations, and it’s clearly for a good reason. But is it a worthy buy? Well, that all depends on your circumstance. 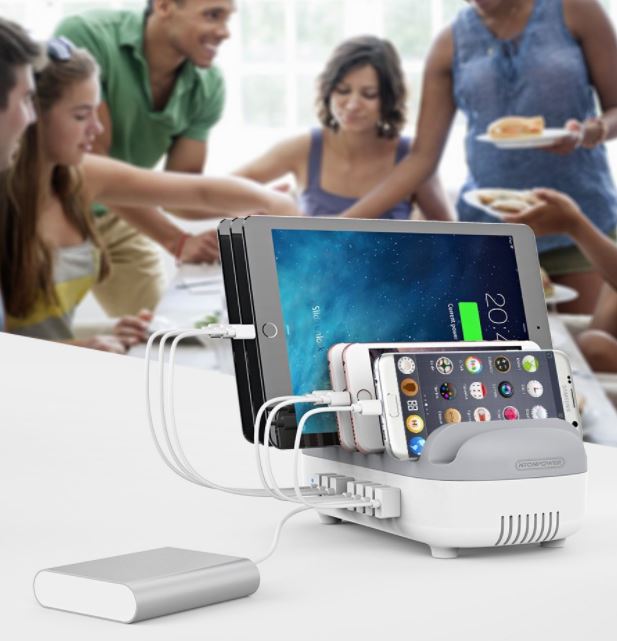 If you’re in need of 4 or more USB charging ports, the NTONPOWER Charging Station is definitely the model for you. It’s clearly designed for professional applications, so even heavy regular use won’t damage it. If you’re only in need of a few ports, this platform is probably overkill. Instead, we’d recommend checkout out our roundup of the best multiport USB wall chargers to see if something there is a little more suitable for your application.