As digital cameras grew in popularity, they were divided into two different cameras. Compact cameras were, by far, the most popular. They were inexpensive, reasonably powerful, and easy to use. DSLR cameras, on the other hand, were significantly more powerful.

DSLR cameras, a designation meaning “digital single lens reflex,” are based after the old analog SLR cameras. The way they worked was simple. A mirror tilted at 45 degrees sent all light coming through the lens to the view finder. This allowed photographers to frame their shot and see a perfect representation of what their final composition would look like. When they depressed the shutter, the mirror flipped up to allow the light to hit the film.

It was easy to separate DSLR’s from their compact competitors. DSLR’s had a mirror, compact cameras did not. But it wasn’t the mirror itself that made DSLRs better than compact cameras. It was a combination of a high end image sensor and interchangeable lenses with professional optics.

At the time, this made sense. High end image sensors could produce a fantastic image, but they couldn’t really do video very well. The mirror was a simple workaround.

Technically, compact cameras where all mirrorless cameras. Today, mirrorless cameras is used to describe a completely different type of photographic technology. The body of these cameras is often just as compact as the consumer grade models, but they feature interchangeable lenses. These cameras have image sensors that can produce professional grade images, but in a body that is much more compact and affordable. The end result is something that sits in between compact cameras and DSLRs. They’re significantly better than compact cameras, and only a little more expensive. They’re marginally worse than DSLRs in certain environments, but neck and neck in other areas.

We’ve already reviewed a few popular digital cameras such as the Fujifilm X-A3, the Panasonic Lumix G85, and the Olympus PEN E-PL8. In their own regard, each of these cameras has a lot to offer. But today we’re taking a look at something special. Canon is arguably one of the most prominent companies in the camera market (although Nikon fans may disagree) and their M100 mirrorless camera looks to be pretty impressive. Does this name brand camera outpace the cameras made by less popular manufacturers? To find out, we decided to try it out four ourselves. 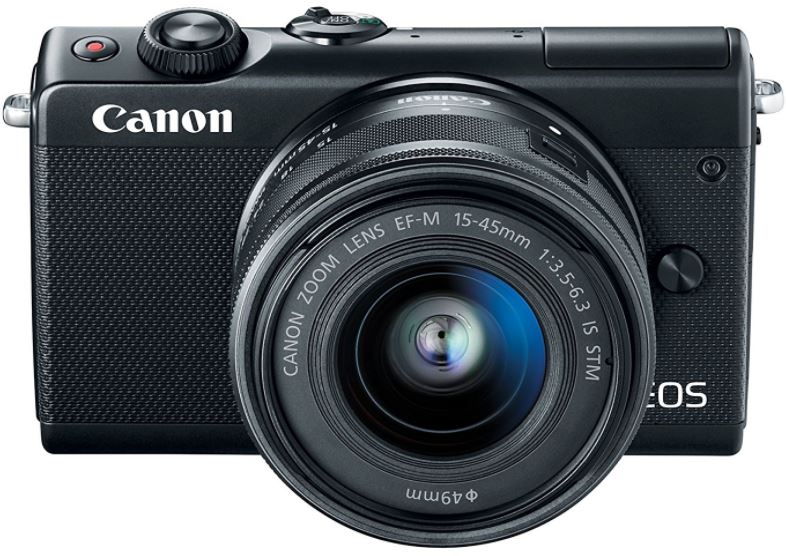 Although Canon already has the popular M6 and M3 mirrorless cameras, the M100 comes in at the bottom of the food chain. It’s the most affordable, and the most newbie friendly mirrorless they make. It’s compatible with all of the EF-M lenses (as well as Canon’s other lenses when used with an adapter,) so consumers have an affordable way to gain access to Canon’s highly regarded line of interchangeable lenses. Although a body-only kit can be purchased, most retailers are carrying a kit that includes the 15 to 45mm lens.

Inside the body you’ll find a 24.2 megapixel APC-C image sensor and the famous DIGIC 7 processor found in many high end DSLR cameras. It can shoot with an ISO speed of up to 25,600, at frame rates of over 6 FPS. Based on specifications alone, this looks to be one powerful camera. But to find out if these specifications translate into real world performance, we had to test it out for ourselves. 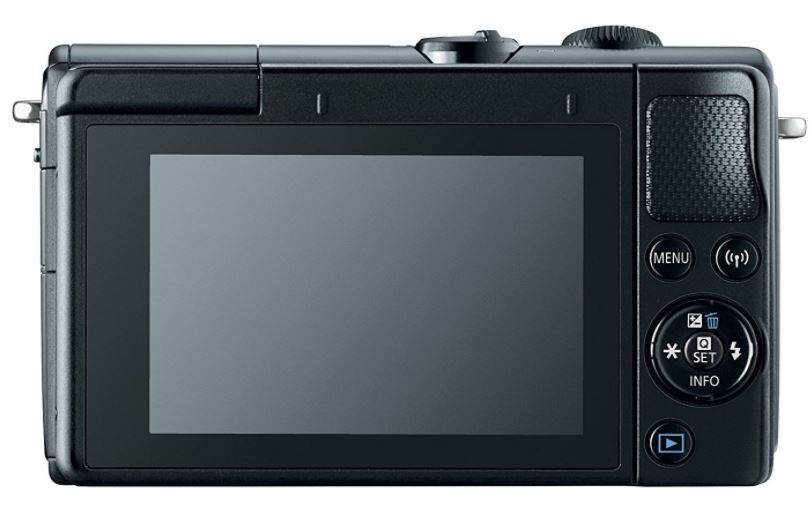 Compared to other mirrorless cameras we’ve tested, this model is much simpler in design than we’re used to. From a usability standpoint, this is a huge advantage. The controls are easy to understand from the moment you pick it up, and there is very little to learn. However, this does mean that the features have been thinned out a little bit. The hot shoe for a flash has been removed, and many controls have been integrated into the touchscreen.

What you will find is an all-black metal enclosure that features two control elements on top. On the right side is the shutter. Just like many other cameras, it has two settings. Depress it part way to focus, then one more click to actuate the shutter.

Next to the shutter you’ll find the control wheel. You can select various camera modes by rotating the wheel, and the camera is turned on or off by depressing a small button in the center.

Even though there is no space for an internal flash, there is an integrated model buried inside the camera. Press a button on the side to pop it up, and physically push down on the flash to return it to the body.

The camera feels very solid in the hand, although you can tell that it’s a more affordable option to Canon’s other high end cameras. One of the features that’s been carried over from higher end models is the tilting touchscreen on the back. It’s a three inch display with 1040K dots, providing a fairly high resolution display. While it may seem a little simpler than Canon’s own high end cameras, the enclosure is still competitive with cameras from other manufacturers. 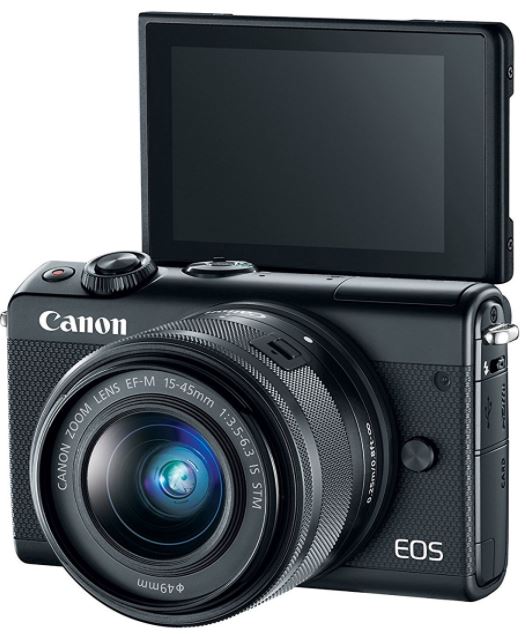 The included lens is a 15 to 45mm F/3.5 to 6.3. These specifications show you the aperture (how wide the lens can open) as well as how much it can zoom.

Zoom is determined by the focal length. This is the measurement from the primary element (the rear piece of glass) to the focus point, which is usually the sensor. The shorter the distance, the wider the angle of the lens. The longer the distance, the more zoomed in it is. The one catch with focal length measurements is that the actual zoom depends on the sensor size. Smaller sensors have smaller focal lengths for the equivalent zoom on a camera with a larger image sensor.

Usually we use 35mm as the main measuring point for an image sensor, as that’s the size of a standard frame of film. Since this camera has an APS-C sensor that is slightly smaller than a 35mm, the ‘equivalent’ measurement of the lenses focal length is actually 24mm to 72mm. For reference, your eye is equivelant to a 50mm focal length. Since this one zooms in or out by roughly 25mm, the kit lens allows you to zoom in at twice the level of your eye, or zoom out to see twice as much detail as your eye can see without moving. This isn’t the largest range on the market, but it should be more than adequate for the majority of users. 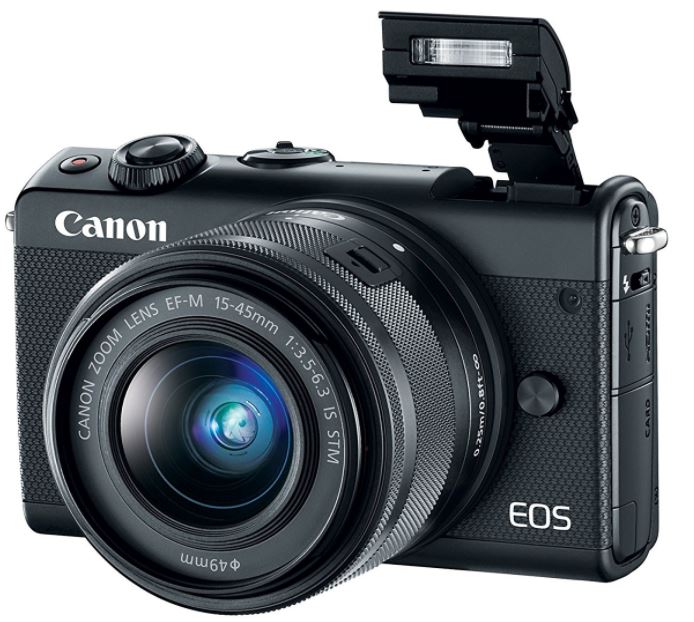 The aperture affects two important things: depth of field and lighting. F/3.5 is a larger aperture, allowing much more light to come through. This makes taking shots at night easier, as you can use a lower sensitivity. Larger apertures also have a lower depth of field. You’ve probably seen a portrait before where the subject was in perfect focus, but the background was blurry. In some cases, this is a desirable effect. F/3.5 isn’t the largest aperture available, and does give you the ability to perform some background blurring provided the background is fairly far away from the camera. When zoomed in, the F/6.3 is fairly small.

In the real world, what this means is that your images will be in focus pretty much all the time. You don’t have much wiggle room for intentionally blurring the background, but the aperture is still wide enough that you can take photos in a variety of lighting conditions.
If you want to expand your collection of lenses, Canon has many options available to you. There are a few basic lenses with the EF-M designation, and an adapter allows you to connect any EF or EF-S lens on the market. These are the lenses used by Canon’s high end DSLR cameras, making this one of the few mirrorless cameras available that can access an already well developed ecosystem of optics. 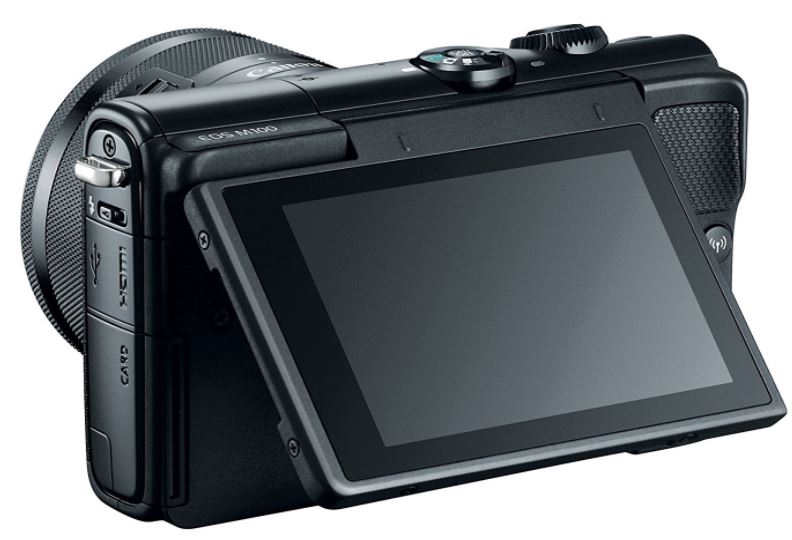 Despite what the simple control scheme may imply, this camera still has the ability to perform like a professional model. There are a couple hidden modes that are easy to access, but don’t use a standard button. The perfect example of the selfie mode. Just tilt the screen up so it faces the front of the camera, and you’ll be able to take a picture of yourself with all of the optimal photo settings. Other options are accessible through auto. The camera will attempt to look at your display and determine what you’re taking a photo of, and select the correct settings. In our tests, we found that it does a very good job.

Because the image sensor is capable of going up to ISO 25,600, this camera takes fantastic shots at night. You do get a slightly grainy image at the highest settings, but this will only happen in very dark conditions. In decent light, the images it produces look simply fantastic. They are very sharp, crisp, and have plenty of detail. The high megapixel rating allows you to crop your images later on without losing a lot of detail, and you can make extremely large prints. 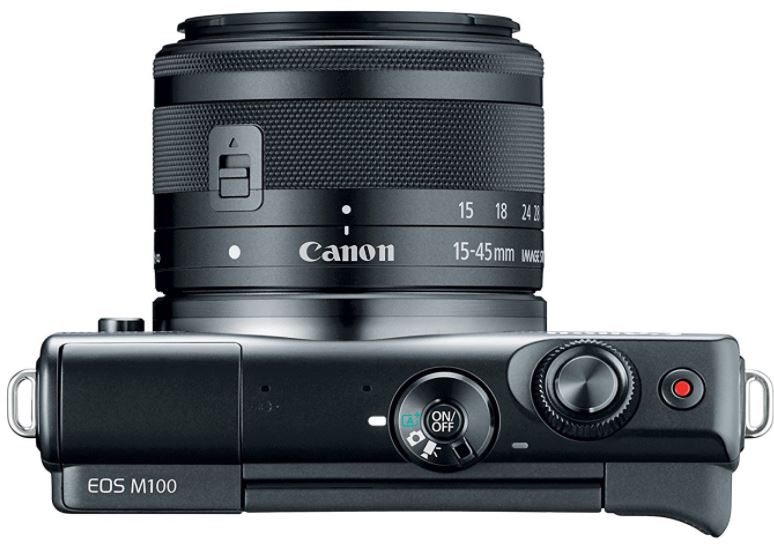 Canon’s M100 also does video just as well as it does photos. It shoots at 1080p, at frame rates of 60, 50, 30, 25 and 24 FPS. With the exception of the Panasonic Lumix G85 (which shoots at 4K,) 1080p is pretty standard for a mirrorless camera. Since the Canon is much cheaper and much more compact, we consider this an acceptable trade off.

Once you’ve got an SD card full of great shots, it’s time to download the photos to your computer. There are a few ways you can do this. The simplest way is just to download them to your computer through a standard Micro-USB cable. But if you’re willing to do a little setup, the photos can be saved over WiFi as well. Downloading them to your phone is even simpler. Just install the Canon app, and tap your phone against the camera. It’s got NFC built right in, so the pairing procedure can be complete automatically.

As consumers start to get experienced with professional grade technology, they may want to start messing with the settings on their own. The M100 doesn’t provide a lot of manual options. It’s meant to be used more like a point and shoot camera. For consumers who are looking for a camera that is easy to use, this is an asset. But if you want to customize the look and feel of your shots, the M100 doesn’t give you as much control as you need. 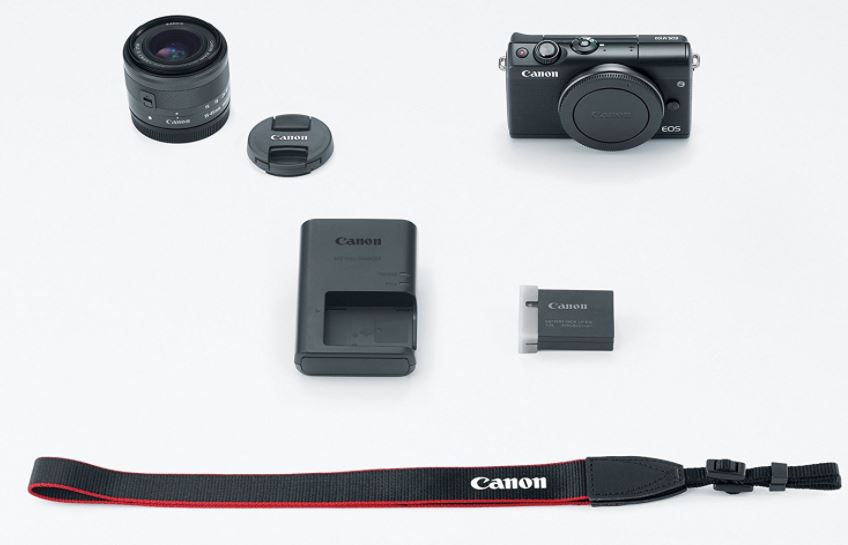 As time goes on, we’re seeing the lines be blurred between different camera types. The M100 blurs these lines even further. It’s a camera that is capable of producing professional grade images, but still has all the simplicity of a point and shoot. If you’re looking for the easiest and most affordable way to get great looking photos, the M100 is a fantastic option.

If you are a more experienced photographer, you might want a little more control over your images. If you’re flexible on your budget, paying a little extra could get you the Fujifilm X-A3. This camera has many more complex options, making it a great choice for anyone who wants more. We recently did a review of this camera, so check it out if you feel that the M100 doesn’t meet your needs.