Anyone who’s played around with the Joy-Con remote already understands the issue. It’s not that the controller is bad, it’s just a little weird. It throws you off. It’s not great for people with larger hands. The list of tiny complaints really goes on.

Because people have differently sized hands, there’s really no such thing as a one-size fits all controller. The Joy-Con was an attempt by Nintendo to make a controller that’s accessible to many people. But it could never be fully accessible to everyone.

Nyko Dualies are essentially a direct alternative to the Joy-Con. They’re not trying to reinvent the wheel, they’re just a slightly different iteration of the classic Joy-Con, for players who haven’t fallen in love with the original Joy-Con controller. They actually work to address many of the small issues that plague the Joy-Con, though admittedly not all of them. 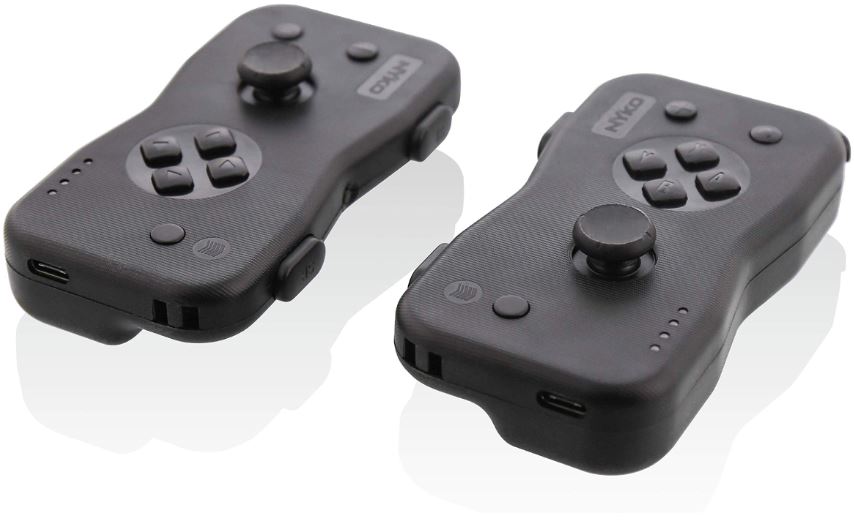 Though Nyko doesn’t have the same brand recognition as Nintendo, they’re actually a pretty solid company when it comes to game peripherals. They make a number of respectable adapters, docks, and similar equipment. Though some of their style choices over the years have been questionable, they seem to have moved in a positive direction with the Nyko Dualies.

Their Dualies are pretty clearly intended to go head-to-head with the Joy-Con in other departments, too. For example, you get two Nyko Dualies in a pack, exactly like a set of Joy-Con remotes. But they’re actually much cheaper, and therein you’ll find a large portion of their appeal.

Nyko Dualies look almost identical to a Joy-Con remote, with a couple of minor improvements. Because the Nyko Dualies are almost a clone of the Joy-Con, anyone familiar with that controller can immediately start feeling comfortable using the Dualies. 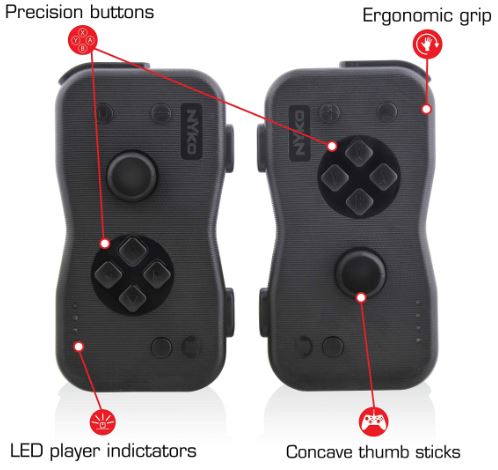 If you want to be precise, they measure roughly 4.3 x 1.5 x 1.2 inches, making them a bit bulkier than the Joy-Con. This slight size difference is beneficial to most people in most circumstances. But it could be a detriment if you end up buying some kind of special adapter for your controller, or some kind of case that’s made specifically for the size of the original Joy-Con.

The remotes themselves are black, and gently texturized to help maintain a strong grip without sacrificing comfort. The texturing does make these controllers slightly more tedious to wipe-down when you need to clean them, but water helps. Each button is labeled in the same manner as a Joy-Con remote, so if you hand the controller to someone who’s familiar with the Joy-Con, they won’t skip a beat getting started with it.

It can actually be tough to tell the Dualies apart from the Joy-Con based on the basis of size, at least until you’ve got them in your hands. Apart from the slightly larger size, people who are familiar with the Joy-Con will identify the few remaining differences almost immediately.

Along the front face of each controller, the keypad uses the same joystick and four button configuration as the Joy-Con. Essentially, that’s what allows it to create the same level of control options for all your games. But the home button has been moved, and there’s an extra button added on the right side of the controller. 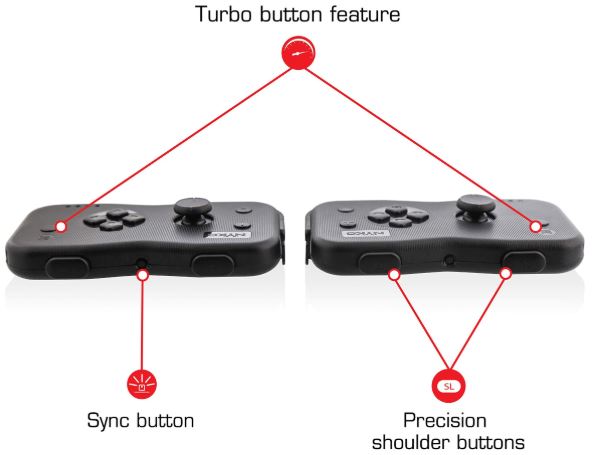 If you were playing blindfolded, or you weren’t familiar with the Joy-Con to begin with, it might be tough to immediately tell the two were different. In addition to their more superficial differences, like both having joysticks, and both using a similar button layout, there are deeper similarities that matter even more.

As you’re probably aware, the Joy-Con remote has many different capabilities. Nyko Dualies works to mirror them all, from their USB-C connection to their wireless connectivity, and even those controller-shaking rumble features. The Nyko Dualies incorporate all of those features into their design, helping them remain indistinguishable from Joy-Con remotes.

But that’s just when you’re looking at the feature set by itself, which isn’t a total picture of what a controller can offer. When it comes to comfort, Nyko Dualies are another game entirely.

The Joy-Con never felt like a controller intended to be used for long periods of time. It’s almost as if Nintendo understands their core audience are mostly casual gamers, and so they didn’t need to make a remote designed to be held for the entire day.

Similar to the Joy-Con, Nyko Dualies are built with rounded edges. These edges are less intent on pulling off a particular aesthetic, and more intent on giving you a better grip to work with. Grip can be especially important if you happen to start holding the controller sideways. But in general, both comfort and ergonomics are better off this way.

Instead, they use shoulder buttons slightly pushed to the outside of the remote. Repositioning those buttons seems like a small thing, but it can make a world of difference when holding your hands in the same position for a couple of consecutive hours. This kind of subtle adjustment that can make a world of difference for any player who relies on those shoulder buttons for gaming, especially for games in the MMO, FPS, and MOBA genres. 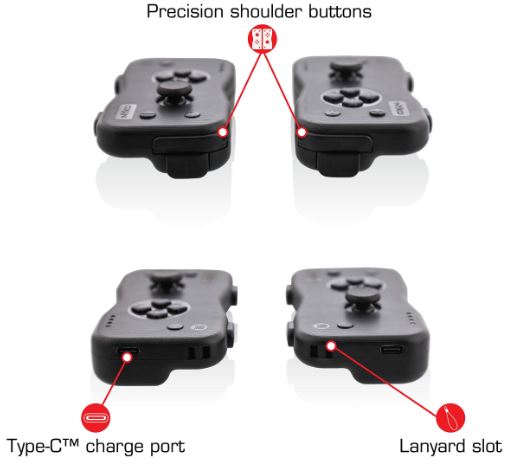 Another special aspect of the Nyko Dualies are the included detachable thumb caps. There’s actually a couple of different sizes you can choose between. The joystick thumb caps on the unaltered Dualies look and feel almost identical to the Joy-Con’s joystick. But adding these extra thumb caps can give you control over the length, texture, and even the size of the stick.

Though we’re only taking about relatively minor differences of a few centimeters, it’s enough of a difference for many people to quickly form a preference. You can pop the thumb caps off-and-on with little effort, and with equally little time. You can check out what kind of arrangement feels best for you pretty fast.

Wireless devices have to be powered somehow! Nyko Dualies are built with essentially the same battery as you’ll find within a Joy-Con remote. Similar to the Joy-Con, you can expect charging time to take up anywhere between 30 minutes and 3 hours. It really depends on where you’re starting from.

But those figures match up closely with the performance of Nintendo’s own controllers. Once you’ve got the charge, you can get nearly six hours of playtime, which is also about the same as a Joy-Con remote.

Wired controllers will basically last forever. Sooner or later the buttons might die from too many inputs, and it’s pretty easy to ruin a cord. But outside of thousands of hours of use, or a terrible disaster, a wired controller can last decades. 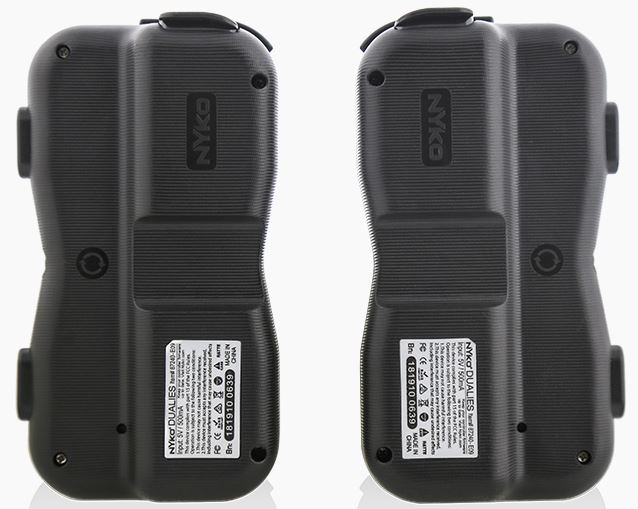 Wireless controllers that rely on batteries are not so lucky. All batteries are disposable. Even those which can be recharged hundreds of times will eventually need to be replaced. The lithium-ion cell batteries inside the Nyko Dualies aren’t something you can access or easily replace, which means they’ve got the same finite lifespan as any product with a battery locked inside.

With heavy regular use, a wireless controller like the Nyko Dualies ought to be able to last for at least three years before you’ll want to consider replacing it. After three years of regular use, you might find the batteries are holding closer to two hours of charge instead of six.

Though that’s assuming terribly heavy use. With more moderate usage, you could likely squeeze five or six years from Nyko Dualies. In other words, about the lifespan of a gaming console.

One of the things which helps distinguish Nyko Dualies from less reputable manufactures of similar gaming devices is an attention to detail. The Dualies include a USB-C cable, capable of handling a 56k ohm resistor to recharge Dualies quickly and safely. It helps keep you and your electronics safe from electrical incidents that can fry equipment. And the high quality of the cable means you can also use it on the Switch.

There are always pros and cons to using third party equipment. When you’re not using an official Nintendo controller, you’re liable to encounter some small issues eventually. One more thing to keep in mind is Nyko Dualies do not have an NFC module. It uses the Nintendo’s wireless channels to connect with the Nintendo Switch, not Bluetooth connections. 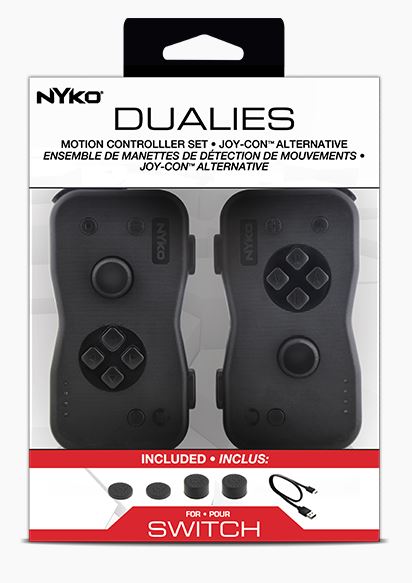 Who Should Choose Nyko Dualies?

It may not have escaped your notice that Nyko Dualies are slightly less expensive than Joy-Con remotes. Though they’re less expensive, they achieve the same things, and then some. The joy-stick caps alone will make a world of difference for some players.

Though they’re slightly larger, Dualies feel similar to a Joy-Con remote. If you have strong opinions about the Joy-Con being too small, they’re probably not going to solve that problem for you because the size difference is pretty small. But it is a step in the right direction. The rounded edges of the controller do feel much better in your hands, far more natural, and feels far more like a regular controller than the Joy-Con.

Just about the worst thing you can say about the Nyko Dualies is that they are a third party controller. Even though the risk is small, you’re always going to be at greater risk of encountering some minor bug or issue related to your decision not to use official Nintendo controllers.

But if you know that limitation about third party controllers and you’re not scared away, they’re not only an excellent value, but an excellent way to add controllers to your Switch without having to spend very much.