If you’re sick of the tinny, undefined quality of your Apple earbuds, you’re in luck! Today, there are more audiophile grade headphones on the market than ever before. Unlike the behemoth audiophile headphones released in the 80s and 90s, many modern headphones are fashionable, isolated, and portable. We’re fortunate enough that we can now take high quality audio with us on the go at all times.

Many people find that upgrading their audio equipment is a bit of an addiction. That first new pair of headphones seems to open up a whole new world of music. Even songs that you once thought you were familiar with seem to be full of hidden details that you were never able to appreciate with your old headphones.

Unfortunately, if you are upgrading your headphones you will eventually hit a bit of a plateau. Many consumer grade units are capable of reproducing sound much more clearly than your computer or mobile device are capable of producing. This is where a DAC comes into play.

A DAC, or digital to analog converter, is what turns the digital sound signal into the wave-forms that your headphones reproduce. Any device that provides an audio output already has one of these DACs in place, but often they are of quite poor quality. If you are playing lossless FLAC audio files or even Spotify’s “ultra” quality audio streams, your audio is likely being downgraded before it hits your ears.

These problems can be fixed with an external DAC, but selecting the right one can be confusing. DACs range in price from $20 to $5000. The Optoma NuForce uDAC5 High-Resolution Mobile DAC promises studio quality audio output in a device that is roughly the size of a deck of cards. Is this the DAC you need to take your audio output to the next level, or does it fail to live up to the expectations of audiophile grade audio? Today we’re going to have a look. 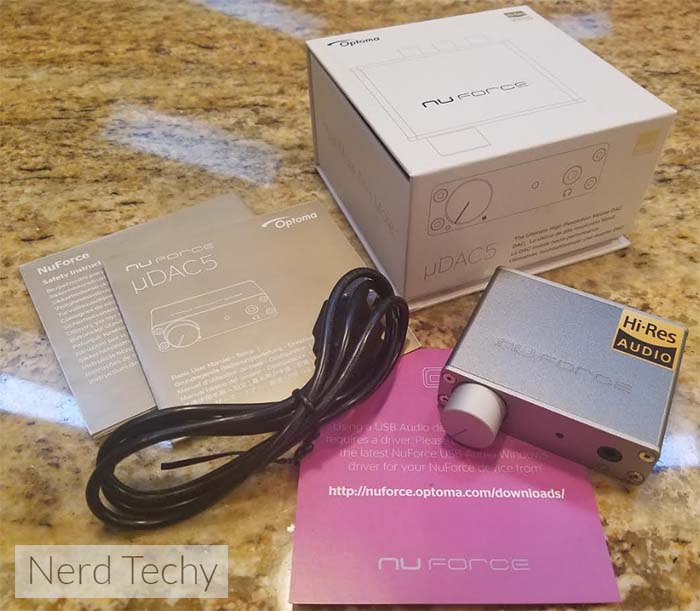 The Nuforce uDAC5 is certainly one compact little device. Just based on size alone, it might be hard to take this DAC seriously, as it looks a little more like a toy or a gadget than a serious piece of audio equipment. But the first time you pick it up all of your concerns will be put to rest, as it’s one solid little unit. The case is made totally from metal. The build quality feels almost aircraft grade, with even the volume knob possessing a simple but responsive feel of motion. 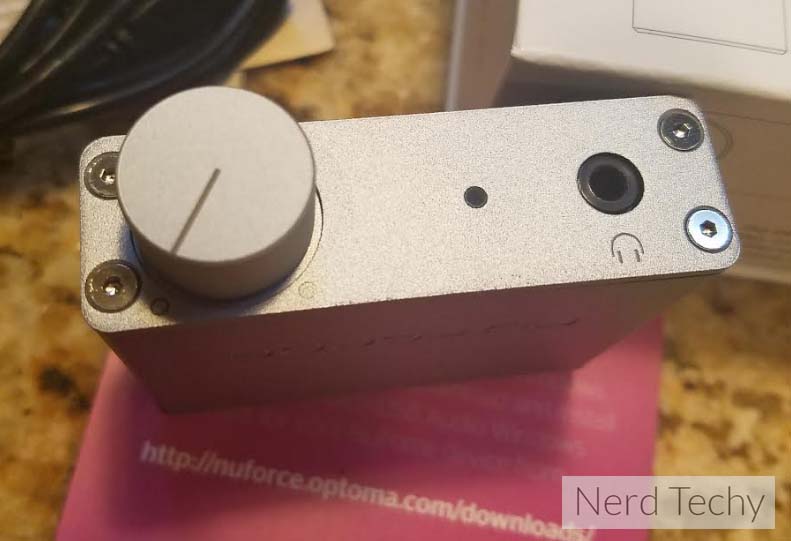 On paper, the uDAC5 is a beast. You can compare it to some of the most expensive DACs on the market, and it’ll hold its own. Inside, the actual decoding is done by a ESS SABRE hyper stream chip. Thanks to this chip, the DAC supports nearly every file format on the market. Obviously, common formats like MP3, WAV, PCM, and MP4a are all supported. But even some of the most obscure, audiophile only formats are also supported. 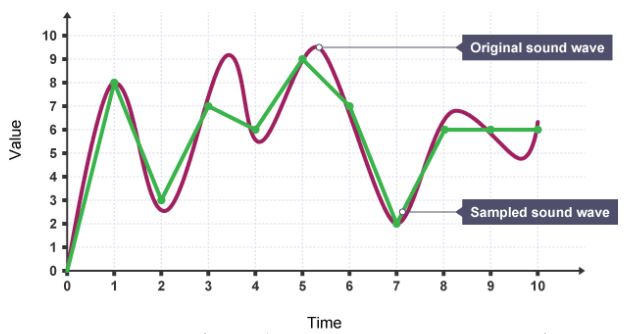 What is so great about high end file formats like DSD? The most important thing is the sample rate. Take a look at the attached image, the red line represents a natural sound wave. The gradual, smooth curves represent the vibrations that need to be reproduced by your speakers. However digital information doesn’t really handle smooth curves like this very well. Instead, audio is encoded in “frames” just like in a video. A movie might be composed of 30 still frame images per second of video, and played back at high speed to give the appearance of motion.

Audio files are encoded the same way, with the “sample rate” referring to how frequently a new “image” is taken. The image represents an extreme example of an analog audio wave being broken down into 10 individual samples. See how the reproduced curve is blocky and distorted? You’d want to take a lot more samples if you wanted to recreate the sound wave more accurately.

The Optoma NuForce uDAC5 supports “high resolution” audio formats, specifically DSD. DSD allows for up to 11.2 million samples per second of audio. Most studio recordings are produced with 10x less samples than it’s capable of, so you can be certain that even if you are listening to the highest end audio files it’ll never be the bottleneck in your system.

There are three possible ways to use this DAC. Most people will be using the 3.5mm audio jack in the front to connect their headphones. For owners of high end desktop headphone owners, you’ll be pleased to know that the built in headphone amp is extremely powerful. It supports up to 2.0Vrms with even low impedance headphones at only 4.7 Ohm. If you’re not much for specs, this means that you can send a lot of current out to your cans. 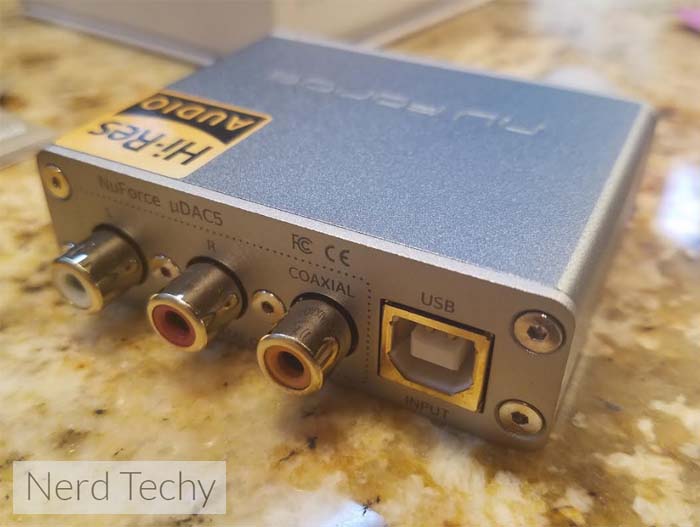 If you’re looking to connect the uDAC5 to a less portable audio set up, you have two options. The most common output, RCA, is available with a standardized 100 Ohm output. If you already have a high end amplifier, this DAC can still expand its capabilities. There is an RCA digital output that will send out an standardized uncompressed PCM stream. This means that your high end amplifier can be expanded by allowing it to decode all of your high end file formats, and convert them into something any amp can understand.

The most important part of all, how does the NuForce uDAC5 sound? In one word, it sounds simply incredible. With the right set of headphones, the audio is simply expansive. It feels like you’ve taken a piece of art, and blown in up to 10x its normal size. Suddenly all of these little details come out of your music that were otherwise invisible. And these details aren’t just there, but instead presented in stark contrast to their harmonic counterparts. For example, in the intro to “My Friends” by the Red Hot Chili Peppers you hear the sharp click of pick hitting strings just a moment before you’re enveloped by the warm hum of each chord.

This ability to accurately reproduce audio the same way it was produced opens a lot of doors to really get into your music. Listening to “Something in The Way” by Nirvana, you’ll at first be disappointed by the muddled, undefined presentation to the song. But as soon as the chorus kicks in a minute in, you’ll suddenly realize that the song was intentionally designed to sound hollow and devoid of life if only to make the chorus more impactful.

However, this is not to say that the impressive sound quality doesn’t have its downsides. Listening to a low quality audio stream on Youtube will make you realize how terrible the compressed audio sounds. You really need to use this DAC with 320 kbps MP3 or better if you want to make the most of it. 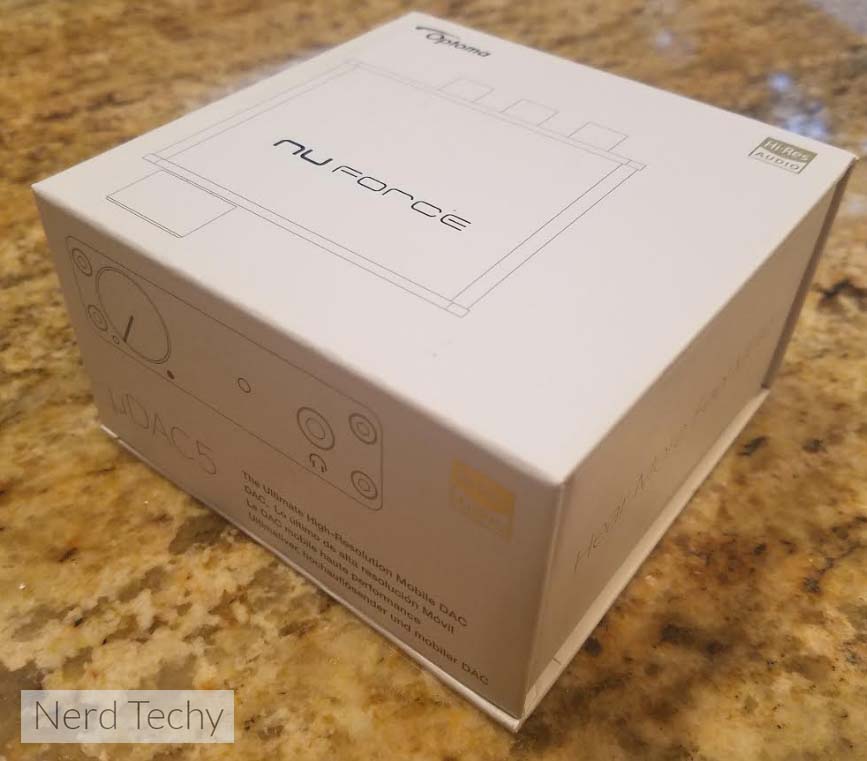 The uDAC5 connects with a USB type B cable (the square looking ones that printers use) to your desktop or laptop computer. Because there is no power supply, this means that all of the supply is drawn from your computer at 5V / 2A. Unfortunately, this means that the DAC will not work with mobile devices. The chipset is technically compatible, but mobile devices do not output enough power to run the DAC. Any Windows, Mac or Linux computer will be fully compatible, however.

Final Verdict: Should You Get the Nuforce µDAC5?

The Optoma Nuforce uDAC5, on paper, looks to be just as good as some $5000 DACs. This has led to a few disappointed reviewers pointing out the flaws in this little machine, failing to keep things in perspective. Clearly, the audio quality isn’t as good as a unit that cost 25x the price. However, it is definitely much better than many DACs that cost five times the price. There are very few units from competitors that can offer such impressive sound quality for such a great price. 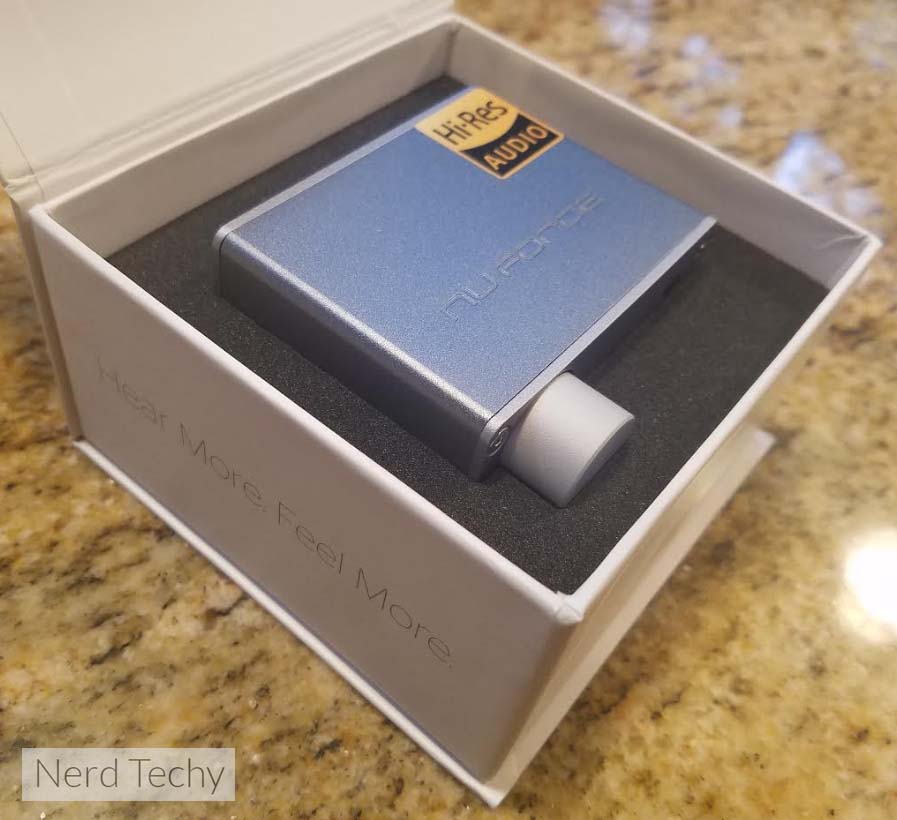 If you’re using any type of high quality audio files, you absolutely need to check out the uDAC5. It will likely completely change the way that you listen to music. It’s important to remember, however, that you can’t polish a turd. You can’t expect this DAC to make Youtube audio streams sound good over your Apple earbuds. To really get the most out of it, you’ll need to use it with 320kbps MP3 files or better, and have a reasonable set of headphones.

Provided you meet all of those requirements, the Nuforce µDAC5 is sure to make you understand why people from all over the world are so enthusiastic about audio equipment.

What is CVC and ANC? Explanation and Differences
April 8, 2020