Most people are non-verbal communicators. Subtle hand gestures, a small inflection in the voice, or the raise of the eyebrow. Visual cues like these are the reason why so many people prefer to call over webcam. It can be essential for effective communication. But what happens if the video momentarily skips when someone’s making a gesture?

What happens when someone’s inflecting a sense of sarcasm in their voice, but a sudden network issue makes it impossible to hear the sarcasm? Whether it’s your first interaction with a client, or it’s a routine meeting with your boss, making a good impression matters. Business call quality isn’t only about a sense of professionalism. Effective communication is equally important.

And that’s really the difference between equipment that’s pretty good, and equipment that’s business-grade. Enterprise-tier electronics aren’t simply made to work well; they’re made to deliver excellence in nearly all circumstances. When you value the difference between 99% reliable and 99.9% reliable, there’s no substitute to enterprise quality business electronics.

At a superficial glance, the Polycom RealPresence Debut looks like a simple 1080p webcam. But delivering on business-quality call clarity requires the Debut to carry an enormous amount of technology inside its little body. Polycom helps string this together by allowing you to create a mobile conferencing solution out of existing equipment. 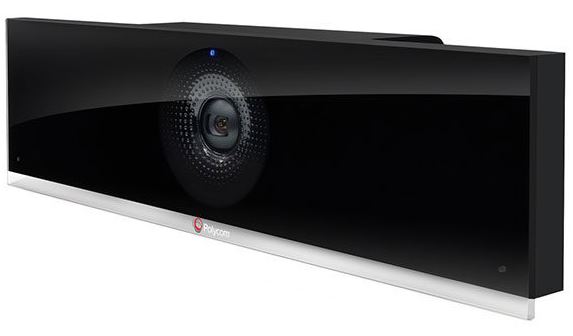 The Debut is intended to be mounted atop a television or monitor, giving you a face-to-face with whoever you’re calling. And that relationship is really at the core of Debut’s aspirations to be an all-in-one solution to the problem of video conferencing. Provided you have a display to use with the Debut, you have everything you need to create a collaborative conference space almost anywhere.

The Debut Collaboration Camera measures 13.4 x 3.7 x 1.8-inches. It basically resembles a webcam that’s been elongated. The front-facing portion of the device has a glossy sheen from the use of real glass, just one of the numerous small touches used by the Debut for a greater effect. 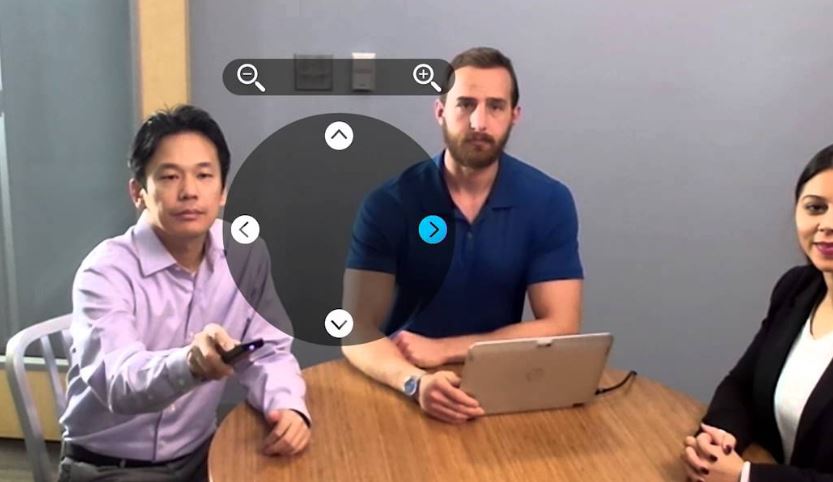 Both setup and use of the RealPresence Debut have been streamlined. On the backside of the RealPresence Debut, you’ll notice a standard Ethernet jack. But that jack also supports power over Ethernet (PoE) so you don’t need to run a DC power cable, USB power cable, or charge a battery. Anywhere you’ve got an Ethernet cable, you’ve got everything you need to turn an ordinary room into a business meeting space.

Apart from the Ethernet port, there’s a USB 2.0 connection, an additional HDMI 1.3 out, and a RJ11 port for an additional microphone. Each port is tucked away in corners of the chassis, well labeled, and positioned symmetrically. Apart from the ports, the only other thing to note is the large mounting space, helping the Debut be secured just about anywhere you’d like. 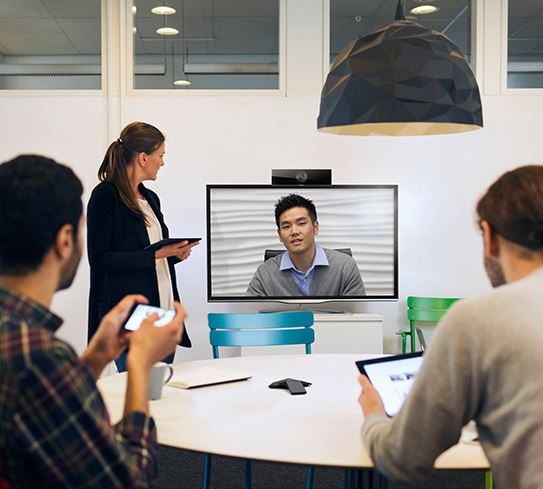 Different types of cameras are made for different types of purposes. When you’re choosing a dash cam for a truck, you want something different than a camera you’d use to take on vacation. Internally, the Polycom RealPresence Debut video camera uses a PTZ design, built to deliver 1080p video at 30fps. That’s comparable to broadcast television or cinema.

Looking 80° horizontally and 50° vertically, it provides a perfect field of view for generating a well-focused meeting space. Both the tilt and pan are motor-based, while the camera operates with a 2x digital zoom. Combined with the help of conferencing software that identifies faces or focuses on who’s speaking, the Debut make it easier to get a personal feel from each call.

In some bizarre circumstances, the Polycom RealPresence Debut will fall short. If you were running a meeting at the UN and the table had a diameter of 25-feet, you’d want to use a wide-angle camera similar to a security camera. But as long as you don’t ask the Debut to perform like a different type of camera, it’s capabilities do not disappoint.

The RealPresence Debut doesn’t simply want to be a powerful webcam; it wants to be an all-in-one conferencing solution. And you can’t have a conferencing solution without the ability to share documents. The Debut helps make content sharing as simple as connecting a PC or mobile device. You can just cable into your laptop to share content, or wirelessly annotate your documents. Polycom’s SmartPairing will do the rest. 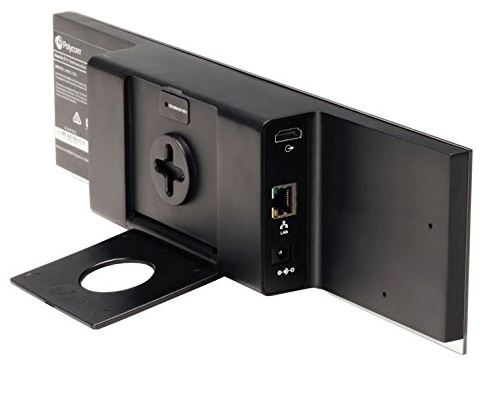 Built inside the Debut, dual stereo microphones are present to provide truly business class audio quality. Properly coordinated, two microphones can work in conjunction with each other to minimize distortion and noise within a room. And for the Debut, these microphones are integral to the ConstantClarity and NoiseBlock are there for audio enhancement features, preventing background noise from disturbing your meeting or distracting others.

These kind of features add a professional touch to every interaction. It eliminates background noise, like people working in the room nearby, or conversations outside the hall. Even if someone’s phone starts going off, ringtones and vibration are heavily or completely scrubbed out of the audio. If you’re setting up at a last-minute location, and you find there’s an A/C unit humming inside the room, these microphones can help squeeze-out that noise as well.

If you have unique microphone requirements, the Debut is further adaptable with its additional external microphone support. The third microphone you select will have to stand on its own merits in most respects, but it can still take advantage of ConstantClarity and NoiseBlock. In other words, if you’re running a microphone to an individual speaker, it’s a pretty nice addition.

Anytime there’s some uncertainty or variable you hadn’t prepared for, the Debut is made specifically to be equipped to polish the coarseness of those experiences. People generally understand that things like dropped calls happen. It’s not incredibly unprofessional if your Internet service has a hiccup.

Nevertheless, it’s annoying and it can get in the way of smooth communication. The Polycom RealPresence Debut can’t make your Internet service provider do a better job, but they can help you better navigate through the occasionally choppy weather of a bad network connection. It does so by helping to preserve and piece together pieces of lost information packets as your connection struggles. 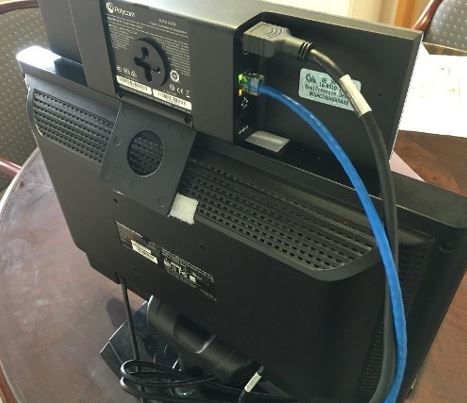 Suppose you’re setting up a digital meeting room in the exposition hall of a local hotel. What happens if there’s something unusual about their network and you have trouble connecting calls? Do you know what to do next?

Most of the time, you’re not going to encounter situations like this. And if you’re not a novice at using the Internet, it’s usually not too hard to wiggle out of them. But these types of things can happen, and they can happen unexpectedly. To solve these kinds of problems, the Polycom RealPresence Debut Collaboration Camera includes a one-year subscription to the Polycom partner service.

That includes access to a group of trained network professionals who are there to help support the deployment of video setup in different circumstances. It’s essentially customer service taken to the next level, at a moment’s notice, where you always have access to a network technician who can take you step by step through network issues.

Similar to its video codecs, the Debut delivers support for a wide range of versatile audio codecs, including G.711, G.722.1, G.722.1C, and Siren 22. Covering wideband, narrowband, and full band audio quality, you can record in detail or record to save space.

One thing you might want to do to help the Debut reach peak performance is to prioritize conference call signals within your router. As a result, even if your Internet service provider starts giving you trouble, even when your connection bandwidth is suddenly squeezed, call clarity can be better maintained.

With that in mind, the Debut has one or two limitations. Perhaps most noteworthy, you can only connect to a single display because dual monitors setups are not possible. That’s actually a design decision which is generally in agreement with the spirit of the device, but it’s something to keep in mind.

The Debut includes a remote control, power adapter, 5.9ft HDMI cable, and 11ft Ethernet cable. The remote control is somewhat basic, but it allows you to make positional adjustments to the camera, volume levels, and so forth. It’s certainly easier than having to keep a mouse nearby. 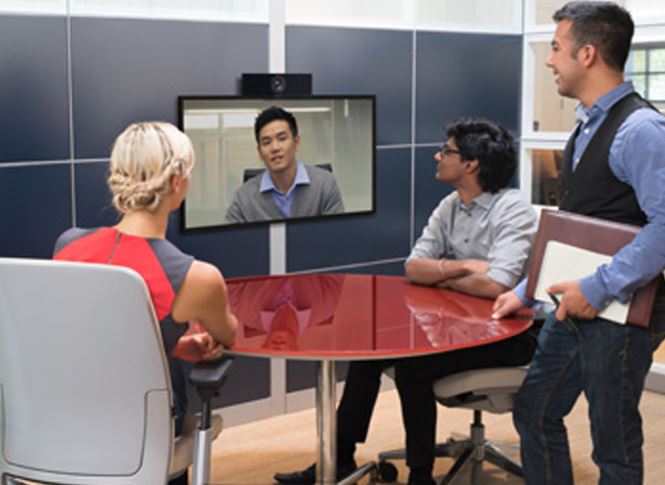 Who Should Choose the Polycom RealPresence Debut Collaboration Camera?

Debut is really about making things simple. Instead of the Polycom RealPresence Debut, you could instead buy two or three microphones, a webcam, and some premium streaming software. You could try to handle the tech support for four different products, try to get them to work together in harmony, and potentially repeat that setup process ad nauseam.

With half a dozen wires running across your floor, you’d still come up short compared to what the Debut offers. Because features like packet protection, NoiseBlock, ConstantClarity, and native file sharing take all these components to another level of quality. Your Internet connection can always fail you. But the Debut will scrape every bit of data it can to ensure your calls are as smooth as possible.

And the entire setup process is for this fairly elaborate system is about as simple as plugging in an Ethernet cord. Given good network conditions, clear crisp audio and video runs as smoothly as if you were watching someone on television. You might be able to achieve similar effects with multiple pieces of separate equipment, but the all-in-one nature of the Debut is what makes it special. It’s a strong choice for businesses seeking simple solutions to a complex problem.