Mousepads are about providing a reliable surface for mice. Most mouse sensors do not work on glass, and do scarcely better on glossy or reflective surfaces. Even on surfaces where your sensor does get a reading, without just the right surface, your pointer can become unwieldly and jittery.

Of course, performance isn’t the only thing people are looking for from a mousepad. People like style, and even better if you can customize that style. But what does that mean for a gaming mousepad?

For PC gamers, the GIGABYTE brand needs no introduction. On nearly every frontier, from motherboards to mice, their AORUS line of gaming equipment is amongst the best hardware you can buy. Following that trend, the AORUS P7 RGB Gaming Mouse Pad is fairly excellent at the niche tasks that it’s set out to achieve. 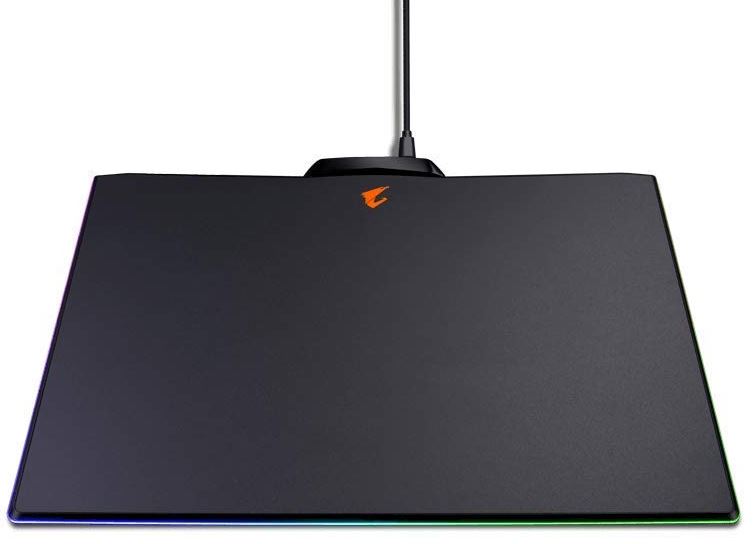 With a heavy emphasis on gaming performance and style, the AORUS P7 Gaming Mouse Pad is actually the first gaming mouse pad within the AORUS line of equipment. And it’s only the third RGB mousepad on the market.

Though GIGABYTE is not the first to create an RGB mousepad, they’ve achieved above-and-beyond performance with their RGB lighting effect. And that may distinguish the AORUS P7 mousepad as the first mousepad to do gaming LEDs right.

Measuring 13.7 x 9.40 x 0.18-inches, the AORUS P7 is slightly larger than the typical gaming mousepad. But it’s still roughly the same size as the average household mousepad. You’re not likely need to break out a measuring tape to ensure it will fit on your desk. Provided your desk already handles a regular mouse pad with ease, you’ll have no trouble fitting the GIGABYTE AORUS P7 RGB Gaming Mouse Pad. 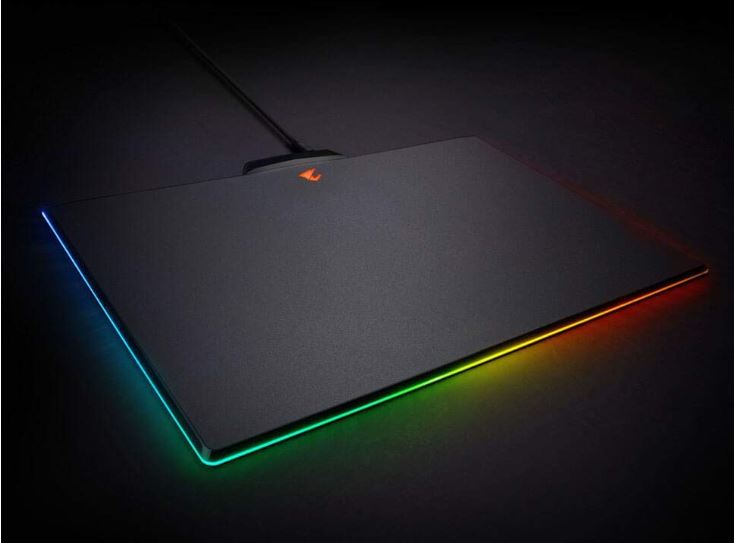 With the bulk of its body constructed from a hardened polycarbonate, the pad itself weighs just shy of one pound. Mousepads need to stick in place, and the P7 RGB Gaming Mouse Pad does an admirable job of that. Its bottom side is constructed with a non-slip rubber base. And that helps keep everything steady, even while placing the pad on a smooth surface like glass.

The AORUS P7 does mean you’ve got to add one more cable on your desk. It requires power for the RGB LEDs to light up, and it needs a means of communicating with the rest of the system. The AORUS P7 Gaming Mouse Pad gets that done with a micro USB port. It connects with an included 6-foot braided cable, which is also detachable. The detachable design is obviously pretty great for longevity and portability.

Many people will wince at the prospect of adding another cable to their desk. But the AORUS P7 RGB Gaming Mouse Pad is designed so that its cable exits from the center-backside of the pad. It’s actually quite easy to manage that cable along with wired mice cables. If you’re someone who’s interested in good cable management, you can strap those two wires together rather easily.

More than anything else, looking nice is the biggest feature of the AORUS P7. That’s mostly done through well-diffused and highly-programmable RGB lighting. Wrapped around the edges of the pad, the AORUS P7 Gaming Mouse Pad makes use of RGB LEDs capable of displaying 16.7 million colors. Each of those LEDs has its output beautifully dispersed by LED light diffusers.

If you’ve got other Gigabyte AORUS products, then the P7 Gaming Mouse Pad can use Gigabyte’s RGB Fusion software to sync up with the rest of your system. Imagine you’re playing a game, and suddenly you take damage. With a little setup beforehand, your entire PC can respond to your injury by flashing red. This begins with the AORUS P7 RGB Gaming Mouse Pad, but can continue on to any other AORUS-linked product. 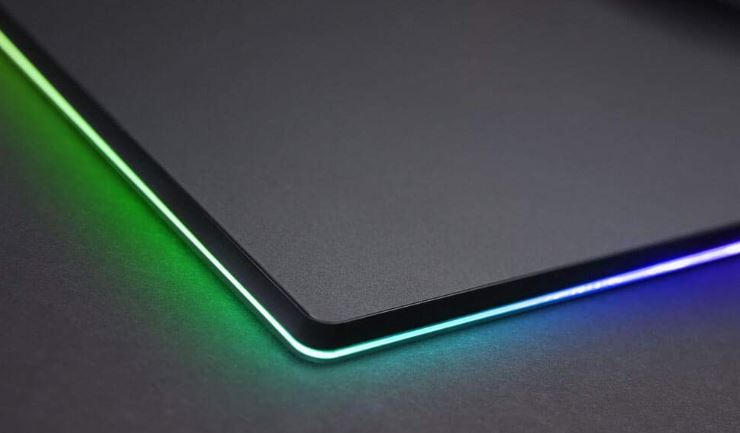 Gigabyte has spent considerable time and effort developing their RGB control software. In simple terms, the AORUS engine can you customize lighting patterns around the edges of the mat. But the RGB control engine is about as sophisticated as they come, capable of creating some rather advanced effects.

Somewhat surprisingly, it’s still fairly intuitive to use. You can get started by choosing a solid color, set of colors, or selecting from a range of preset animations. The presets do many of the usual things LEDs do, like blink, wave, or otherwise light-up in particular patterns. But more importantly, you can make your own customized animations. With a little more effort, you can even link those animations to game events.

For the most part, the AORUS RGB software is quite approachable; you don’t need special knowledge or coding skills to start putting together your own animations. And if you’re lazy, not creative, or not technically inclined, you can always use someone else’s animations because sharing them is fairly simple.

The reason why you don’t see many gamers using mousepads with giant pillows attached to them is because of mobility. If you’re playing a point-and-click game, then you don’t really need to be mobile with your wrist. But if you’re playing something more action oriented, such as titles within the MOBA or FPS genre, then you generally want to be able to swing your hand freely.

And that’s not something you can do if your wrist is affixed on a giant pillow. Of course, if you don’t play those types of games to begin with, and you highly value comfort, then you’d probably be better off using a mousepad with some giant pillows attached. The AORUS P7 is has a pleasantly smooth surface, and its polycarbonate design is exceptionally good at dissipating heat, but it’s not padded. 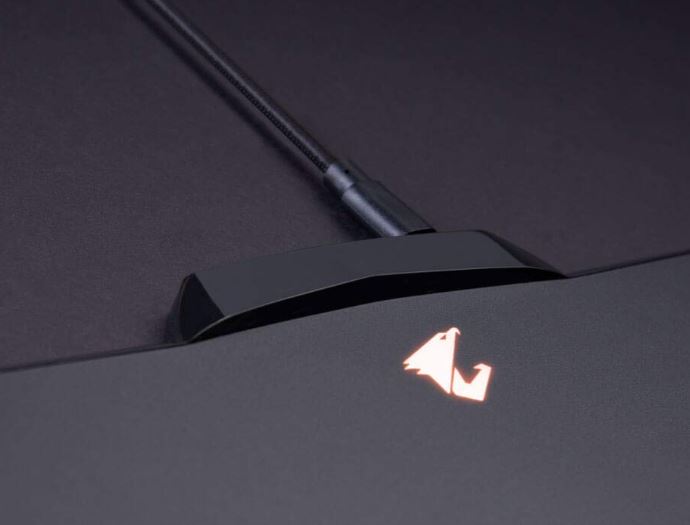 Optical mice are exceptionally sensitive to the surfaces they’re placed on. Slightly inadequate surfaces can produce pretty uncomfortable results, visually noticeable as your mouse pointer jitters from one place to the next. Laser mice are less sensitive to these types of problems because they’re doing a deeper read of the surface than the optical mice, which is how they end up with much greater resolutions (DPI) in most cases.

When you’ve invested in a high-end gaming mouse, you might end up a sensor that’s capable of 10,000 DPI or more. But whether or not the sensor can actually deliver on that grade of accuracy partially depends on the surface it’s reading against. Truly unlocking gaming-grade mice is a matter of having a mouse-appropriate micro texturized surface. If you’re someone who’s been using your mouse on couch fabric or wooden tables, the differences in consistent motion can be stark.

With respect to accuracy, a mouse pad might be designed to read better with either a laser or an optical sensor. Covering the full use-area of the GIGABYTE AORUS P7 Gaming Mouse Pad is a deceptively special surface. The surface uses a micro-texturized design that’s specifically designed for mouse sensors to read against.

Cloth pads have higher rates of friction than smoother surfaces like the AORUS P7 RGB Gaming Mousepad. The smooth surface makes it great for quickly moving from one space of the pad to the next, ideal for accuracy and speed. While the AORUS P7 Gaming Mouse Pad is particularly useful for optical mice sensors, but the low-friction design of the pad works well for laser sensors as well.

Human skin is coated with oils and is almost perpetually shedding tiny fragments of skin. Anything that sees regular contact with human skin is going to need cleaning. When it comes to foam-based mousepads, cleaning can be tricky. The foam pad likes to hold on to water, and an abundance of wetness tends to wash away some of the glues that keep everything together.

The retained wetness in the pad can even cause it to slide around for a few days after you’ve tried to clean it. A more cautious approach is possible, but take considerably more time. Smoother pads like the AORUS P7 RGB Gaming Mouse Pad are an exception. You can wipe down this gaming mouse pad with a damp cloth and effectively clean it in a matter of seconds. It can be especially useful when there’s some kind of accidentally spill near your mousepad. 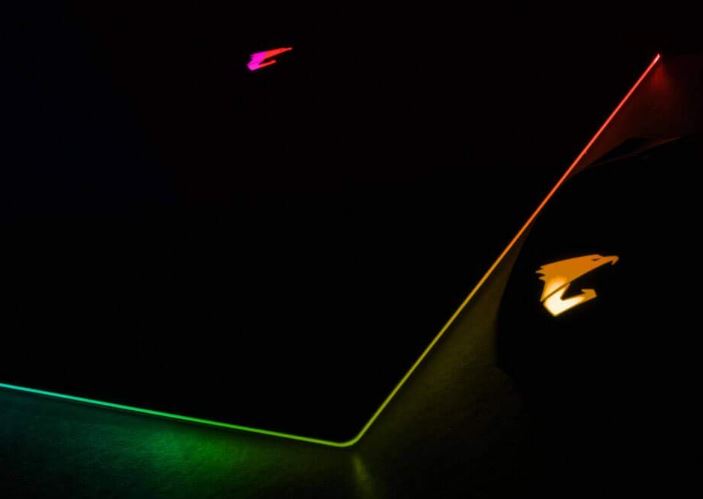 The somewhat small differences in feedback from using a micro-textured gaming mouse pad aren’t going to be useful for everyone. If you’re playing more slow-paced games, like within the strategy or puzzle genre, then you might as well be playing with any mouse.

Compared to the handful of other gaming mouse pads with RGB, what really helps the GIGABYTE AORUS P7 RGB Gaming Mouse Pad stand on its own is the AORUS control software. If you’re looking for a stylish mouse pad, having the deep backing of that well-developed software may be reason alone to choose this pad. Ongoing software support and updates from GIGABYTE only sweetens the deal.

Selecting the right mousepad is mostly a personal choice. If you couldn’t care less about style, then you don’t need the AORUS P7 RGB Gaming Mouse Pad. You could probably wrap a piece of cloth around a large book, and it would serve as an adequate mouse pad for most circumstances. It brings style to the table, for people who don’t want better for themselves than using a book wrapped in cloth.

Whether you have any other piece of the AORUS Fusion LED or not, the P7 RGB Gaming Mouse pad is fairly compelling. It can sync up with the rest of your gear and look amazing in concert with other hardware, but it’s also a pretty attractive choice even if you don’t plan on getting additional RGB gear. It’s independently stylish and does a great job of accentuating a desk.

The AORUS P7 gaming mouse pad is a good call for virtually any type of mouse. And the smooth, micro-texturized surface is great for sensor readings for responsive active gaming. Depending on what you play, and how you’ve adjusted your mouse settings, different gamers will want to use different type of mousepads. But just about any gamer interested in performance or style should take a close look at this pad.