This latest WiFi device from Ignition Design Labs has received significant backing, not just for their technical ability, as many manufacturers have to varying degrees, but also their professionalism in their particular market. For those unfamiliar with WiFi technology, for the most part, manufacturers have looked to the antennas to create dual band transmissions. While these advancements provide definite advantages in speed and reliability, there has been a missing ingredient which has been, for the most part, ignored.

As IDL points out in the Portal Turbocharged WiFi‘s Kickstarter campaign, there’s a delicate balance between the legal and technical side. This is for good reason, as we’ll discover in a moment. However, it’s worth mentioning that it’s received certification for duplicating the effectiveness of any Internet source wirelessly, where other models haven’t. 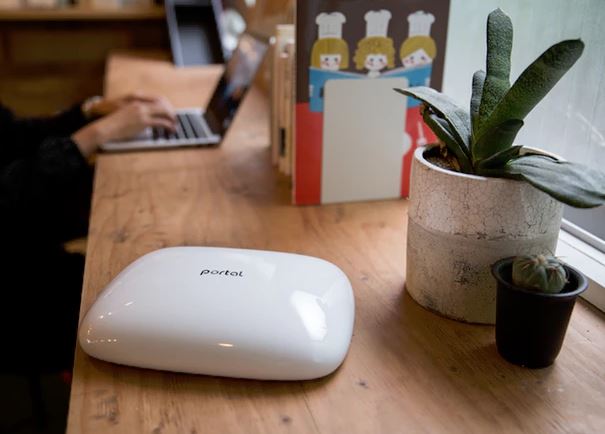 That being said, it doesn’t give an automatic pass. We’ll go into detail about what makes this WiFi device so much faster and more reliable, as well as what merits it has in a market that appears to be already saturated and reaching a peak in development.

This feature alone makes this router worthy of consideration, however it’s not the concept but the fine-tuning and compliance with government regulation that kicks it into overdrive. What we mean by this, is that conventional routers use only two sixths of the 5 GHz radio spectrum (5170-5250MHz and 5735-5835MHz).

Essentially, you’re only getting one sixth of the internet bandwidth that’s available. However, the 300% larger part of the spectrum has been protected from use in order to reserve access for radar devices that weather instruments depend on. For this reason, pretty much any router on the market utilizes 0% of this untapped area of the spectrum, because of FCC standards.

What makes Portal so special is that it’s actually been given total clearance to use the entire 5GHz wireless spectrum for mass production. This is due to the effectiveness of its trademarked “FastLanes” technology. This doesn’t hog the entire spectrum, but simply provides the best range and speed you’ve experienced before in your home, possibly better.

In combination with Ignition Design Labs’ trademarked SmartLanes technology, it monitors each of the six channels within the spectrum. It’ll then automatically uses the one that has the least amount of traffic, and give you as much bandwidth as possible. 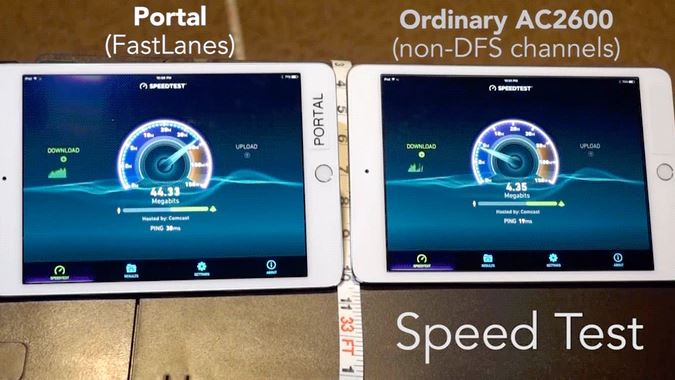 9 Antennas for Speed and Range

This in no way discounts the effectiveness of a good antenna design, as Portal actually uses nine of them. They’re hidden away within its casing in different locations to provide as much range and access as possible, so you aren’t limited to a few rooms in your home, but can actually enjoy it wherever you choose.

The actual range is about 2,500 square feet. The beauty of this is that because of the FCC certified FastLanes and SmartLanes technology, the entire WiFi zone provides significantly higher speeds than a model relying on antennas alone. They also support active beam steering. This ensures that no matter how many devices you’re connecting to it, a WiFi band is concentrated and dedicated to them, achieving higher speeds and more reliability overall. 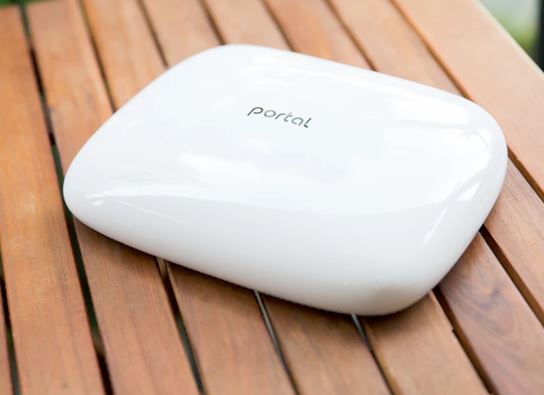 Another commonly overlooked factor is the amount and effectiveness of the radios used in WiFi routers. They provide access to many advanced features that can provide a tremendous amount of performance and comfort for your entire home.

For starters, they support both WiFi band types (5GHz and 2.4GHz). This works great for older devices that are only compatible with 2.4GHz bands, but it provides a benefit for newer devices as well. They’re able to take advantage of the additional bandwidth by providing both bands at once, which complements the active beam steering capabilities.

Another feature these advanced radios provide is called Multi User Multi-Input Multi-Output. This essentially carves out space for every device on the particular area of the 5GHz spectrum that your router is using. Your wireless internet speed is essentially doubled as well, since each of the radios are being used together. Also, because of the amount and quality of the antennas, you’re able to take full advantage of it.

These radios are part of the reason why Portal can detect and make way for weather radars, as well as monitor the wireless traffic near your home. They support the latest in Bluetooth technology (version 4.2) too, which allows your wireless devices to communicate with it both ways, providing greater range and speed. Your devices will also drain less battery, because they use a specified amount of power for this as well. 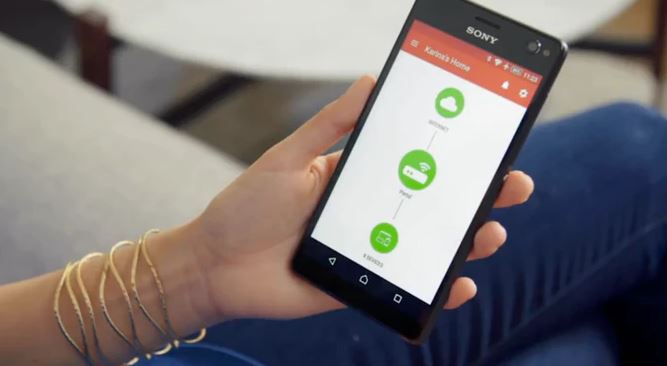 This aspect is worthy of discussion for any router, because a lot of the information being transmitted wirelessly can be sensitive, and it’s good to know that your data is protected. First, Portal features a rolling-code technology feature for guest networks that essentially uses a unique security pin for each device that you grant access to. It then randomly changes it every time it connects.

This way, even if a person taps into your device and retrieves that pin, it’s going to be different the next time someone enters your network, thus stopping them in their tracks. On the other hand, Portal also actively monitors its own network for hidden and unwanted visitors. The moment it finds something peculiar, it’ll automatically send an alert to your smart phone so you can check it out. While many people would find this annoying, it’s a nice feature to have just in case you want that extra bit of security.

The web interface that you use to control Portal also requires two security measures to grant access. However, this is optional and you can block access to it altogether. It also has the typical WiFi Protected Access (WPA/WPA2 – SPK) which is nice, as well as an option to create a virtual private network from anywhere in the world.

In terms of a firewall, it uses two protocols called SPI and NAT. Stateful Packet Inspection, as the name suggests, inspects all incoming packets to ensure that it’s from a known source before allowing it, in order to prevent anyone from hacking your network. Network Address Translation works with your virtual private networks without any effort on your part, to block unwanted traffic when you’re using a VyprVPN. 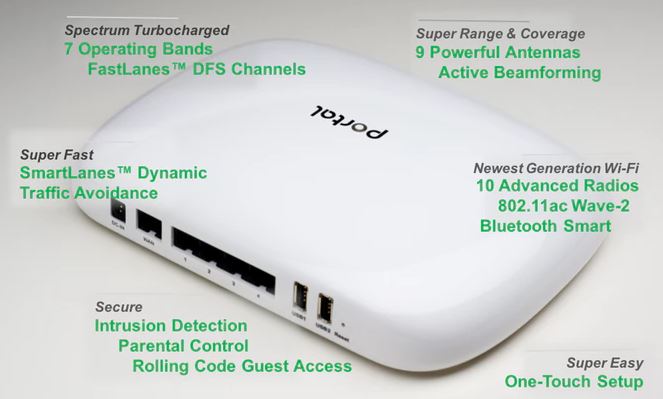 Hardware Design and Other Advanced Features

As you know, the antenna design is very unobtrusive. However, the entire router is designed to look kind of like a contemporary bubble which looks nice in your home. It’s clear that Ignition Design Labs designed this router for a lot more than just looking cool. It’s worth mentioning that its sleek and soft design makes it easy to manage and store, pretty much in any room. This does provide a benefit in strategic placing for greater range.

On the practical side of things, there are 5 switched gigabit Ethernet ports for multiple wired connections. There’s also 2 USB ports for attached storage, protected printer servers and other uses as well.

Portal also supports a daisy-chain design, where if you combine two of them together, they effectively increase your wireless range by 200 feet around, effectively doubling your wireless range. This is made possible by the dynamic layer-2 routing mesh that features near-zero interference, which says a lot about the professionalism of Portal’s design.

Setting up and using it is pretty easy overall. It has auto-detect features for both WiFi and Bluetooth connected devices. Because of the reliable security protocols, they connect much more quickly with one-touch technology.

In terms of Quality of Service, it’s capable of analyzing the data streams of your devices, such as when playing online video games while streaming movies. It’ll dedicate more bandwidth to more demanding devices. Also, it’s compliant with Digital Living Network Alliance devices, and will stream data to your game consoles and other devices seamlessly on their servers.

On the wireless end of things, the 802.11ac Wave-2 WiFi technology actually has 7 operating bands for the certified access. This allows greater bandwidth to its channels, which have been fully tested over the duration of their Kickstarter campaign.

It wouldn’t be correct to protest that Portal is anywhere close to late to the game, despite the fact that expensive routers have almost overcrowded the market. It’s true that many inexpensive routers still get the job done, but with the slow trickle of innovation in this market, it’s a great solution to those feeling the bite from the growing usage of wireless devices.

Especially in cities, where you can go from perfect Internet access to not even being able to stream a movie from start to finish. This router meets the acid test when compared to other models. Granted, other manufacturers are sure to catch on to their latest technology. However, the amount of expertise and quality that’s been put into Portal makes it a one-stop model for anyone looking to increase their wireless internet speed and range.

The point where it may not be a good solution for you comes down to price, but even if it does come with a higher price tag than you’re expecting, it should serve you well over the years of increasing data usage.