If there was one thing to be learned from the latest Consumer Electronics Show, it’s that VR technology is hot. A world where immersive 3D gaming is the standard feels so close we can touch it. Every month, there is a new player on the block with a technology that seems to revolutionize virtual reality. One thing is for sure, it’s an exciting time to be a VR fan.

With virtual reality headsets, games, and hardware now readily available on the consumer marketplace, many early adopters are asking the same question. “What’s holding us back?”

Even though VR seems like it’s ready for primetime, there is still a lot to do. The video is certainly convincing, but most users can attest that something still feels a little off about the whole experience.

What we’re missing is the audio. Anyone who’s upgraded their speakers before knows what a huge difference high quality audio makes. But we still can’t replicate real-world audio for a VR environment.

Next time you’re outside, you can prove this. Close your eyes, and listen to the world around you. What can you hear? Whether it’s chatter in the background, cars driving by, or the sound of the wind in the trees, sound alone can help you paint a pretty vivid mental picture.

This is what the Sennheiser Ambeo system is trying to do. But is it as good as they claim? And how does it work? We put it to the test to find out.

With the cap on, Sennheiser’s Ambeo looks just like a regular microphone. But pull the cap off, and you’ll see something unique. Instead of a regular condenser, you’ll see what looks like a quadratic arrangement of four condensers. This is what’s known to professionals as an Ambisonics microphone, although some refer to it as a TetraMic. Instead of simply recording sound like a standard microphone, Sennheiser’s Ambeo is digitizing the relationship between sound and space. The implications of this technology might not be obvious yet, but you’ll soon understand why this is important.

Some critics have questioned Sennheiser’s claim that this is the first VR mic. While it’s true that this isn’t the first microphone with Ambisonics technology, the microphone is just one part of the system. Soon, Sennheiser will be releasing a software kit that will take the output from this microphone and convert it into an immersive three-dimensional recording that will adapt to the listener’s position within it. This combination of hardware and software is absolutely a first in the industry. 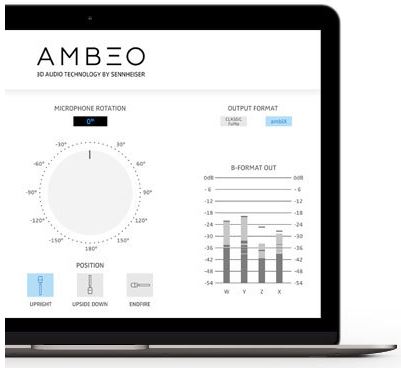 How does it work? To understand this, we’ll need to briefly explain how VR audio works today. Standard microphones have two possible outputs. When the condenser is pushed down, a positive signal is sent out. When it pulls back up, a negative signal is sent. This fluctuation between positive and negative movement is what creates the sine-wave representation of an audio signal.

A modern technique for VR is to use binaural recordings. This involves two microphones, placed exactly the same distance apart as your ears would be. One microphone records the sound that would enter your left eardrum, and the other the right. When you are listening from the exact same position as where the sound was recorded, the sound is as realistic as you can get. Maybe the sound hit your left ear a fraction of a millisecond after it hit the right. There might be a slight echo off the wall behind you. These details are imperceptible to you, but your subconscious interprets them to understand your environment.

If you applied Ambisonics theory to our two-microphone binaural setup, you would compare the output from one microphone to the other. If the sound was delayed by X travelling from one mic to the other, you could determine how much it would have been delayed if the microphone was placed elsewhere in the room.

Sennheiser’s VR microphone has condensers pointing to the left, the right, above, and below it. But it’s not recording four channels of sound. It’s recording a single channel, and determining how the sound changes as heard from different angles.

The end result is a recording that documents the acoustics of a room. Combined with the advanced head tracking technology of a VR headset, this microphone will soon allow your ears to hear exactly what they would have heard if you were in the environment where the sound was recorded.

Traditionally speaking, different microphones are suited to different tasks. The type of mic you use to record voice will be different than what you’d use to record a bass guitar. For this reason, we’re used to looking at the frequency response and determining what kind of sound a microphone would be good for, and what it would not be good for.

But the Ambeo VR microphone isn’t designed to be used like a standard microphone. We’re not setting up multiple microphones to simulate a 3D environment, we’re getting the real deal. But this presents a unique challenge to the mic, as it needs to record every audible frequency in an accurate and precise manner.

This is a pre-polarized condenser mic, designed to handle 130 decibels at a frequency of 1Khz. This a very impressive specification, as most condenser microphones have a much lower sound limit. A 130-decibel sound is as loud as listening to a military jet take off from 50 feet away, and loud enough to cause physical pain. If you were recording anything louder than this, reproducing it accurately would just be mean.

It can also record all frequencies between 20 Hz and 20 kHz, which is the known limitation of human hearing. It’s pretty clear from the specs alone that Sennheiser knew what was needed for a single-microphone system, and made sure that they had it. 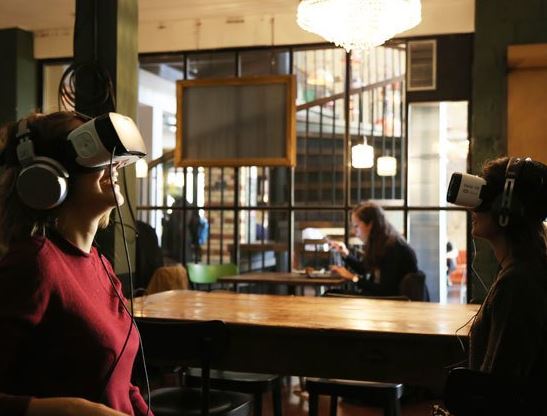 Sennheiser’s VR Microphone comes equipped with dual-XLR cables. It requires phantom power to run, but it’s low impedance means that you can run it directly into an appropriate sound card or mixing board. But that’s where the similarities end. Since it’s not outputting a standard audio signal, it’s completely unusable as-is. And the software needed to create a 3D audio environment isn’t available yet, so you’re not able to use the mic to its full potential.

Fortunately, Sennheiser has included everything you need to make the best of it. With the purchase, they’re giving you access to their proprietary A-B format encoder. What this does it take the differential signal and separate it into a 9.1 channel audio system. This allows you to plug it into your DAW of choice, and begin preliminary mixing.

If you’re prototyping a game, you can mix it down to the current industry standard, a binaural audio format. Once the full suite is released, you can take the source file and recreate your 3D environment. You can also mix the sound down into a standard 5.1 or 7.1 system, making this microphone and advanced tool for cinematic purposes. 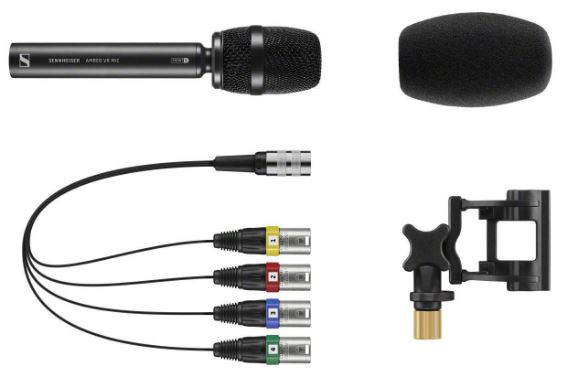 The Sennheiser Ambeo has the potential to be groundbreaking, and software prototypes are giving us all the indications that it will be. But this microphone is only one part of the equation, and the software that makes it all possible is not yet available. Sennheiser did not mince words, if you buy this microphone, you are an early adopter. There is no doubt that the format will grow, change, and adapt and development proceeds. If you buy it today, you’re not getting a 3D microphone. You’re getting a 9.1 channel microphone, that will be upgraded sometime in the near future. And with VR technology improving on a monthly basis, it is possible that another option will be out before you can use the VR mic as it’s intended.

The Sennheiser Ambeo platform is a technology that blows away any current 3D audio system in the world. 7.1 audio might be fine for movies, but virtual reality needs something adaptable. There are only a few Ambisonics microphones on the market, all of which are made by small specialist companies. Considering how much development has to go into turning this technology into something we can use, Sennheiser is the only player large enough who can pull it off. 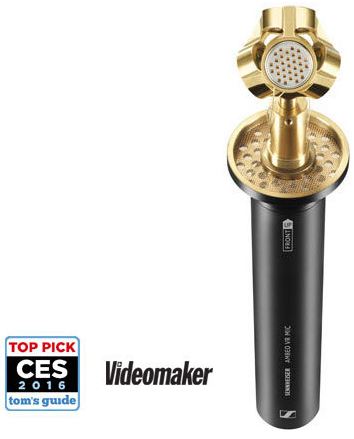 Who should buy the Sennheiser Ambeo VR Mic? If you’re a VR developer or media company, now would be a good time to purchase. You’ll be able to get all your source files ready now while the software is in development, and have one of the first 3D sound launch titles on the market.

This microphone is also useful to anyone who wants to record 7.1, or even use the proprietary 9.1 audio format. Because your source files will be in A format, you’ll have a little flexibility modifying them in post-processing. Just like showing RAW gives you additional light data that isn’t visible in a fixed image, managing the A to B encoding process allows you to tweak acoustics and speaker settings after the recording is done.

Overall, this promising technology still has a very limited market. But we’re excited to see where it goes over the next few months.