It’s uniquely challenging to design in-ear monitors. You’re using tiny audio drivers, sitting right next to your ear, but they’re supposed to sound like listening to speakers in a room. It’s like viewing a photograph on the wall, and then looking at the same photo on your phone. Though both photos might be roughly the same size, you can feel they’re different.

That’s the challenge facing in-ear monitors. Intended to help you monitor sound during performance, IEMs need you to feel like you’re hearing every instrument individually. They’re supposed to sound like you’re in the middle of the performance, yet still receive tonal clarity. Frankly, it’s no small task.

You might break up audiophile equipment into three distinct tiers. The first tier is entry-level audiophile gear. It allows you to embrace high resolution sound and meet lower audiophile standards. Similar to owning a sports car, you’ve got a powerful piece of equipment, but there’s always something better.

The third and final tier involves what most people regard as gross over-abundance. This is where you’ll find $20,000 vinyl players, or find audiophiles spending hundreds of dollars for a single connection wire.

Among these three tiers, it’s easy to place Sony’s newest in-ear monitors. The IER-M7 and IER-M9 belong in the first tier and second tier, respectively. Both the M9 and M7 are intended for stage monitoring. Both make use of Sony’s Balanced Armature drivers, a fairly novel driver system that’s hard to compare to other equipment. 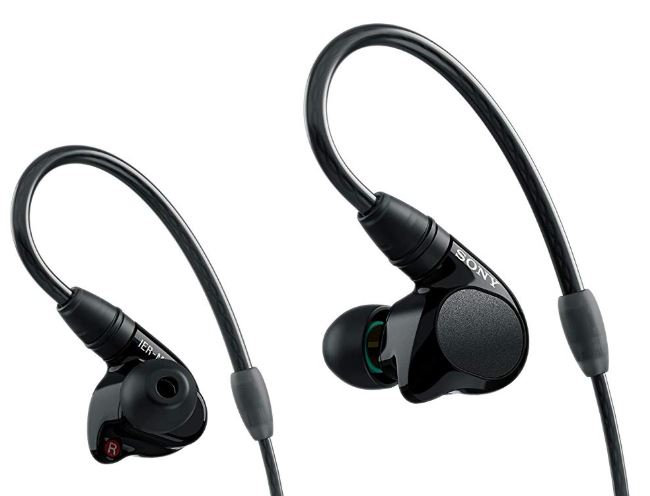 As with any pair of IEMs, this equipment has the goal of allowing you to discern individual instruments during a performance. That includes monitoring for one’s own voice. But the M7 and M9 take a unique route to achieve heightened audio fidelity, which makes them fairly difficult to fairly compare to any other IEMs. 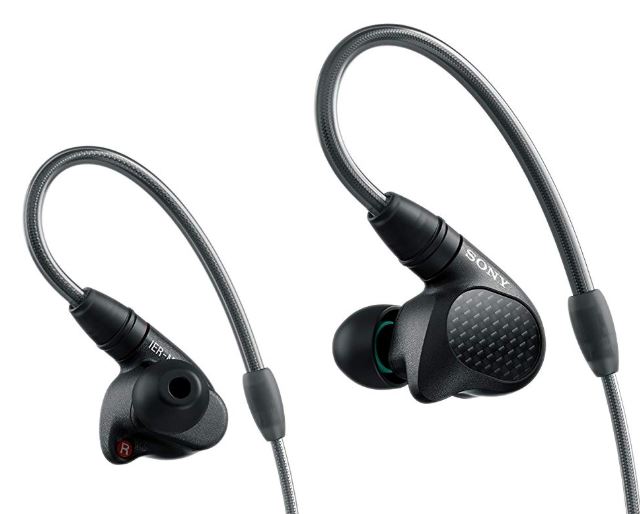 The IER-M7 weighs roughly nine ounces, while the M9 weighs roughly two ounces more. Both buds share the same essential high-end aesthetic, black-bodied with the exception of a single red highlight at the connection juncture.

Their inner housing shares a magnesium alloy construction, managing to hold in place those Balanced Armature drivers to minimize vibration and distortion. Their outer housing has been designed to maximize noise isolation, with further benefits to be wrought from stability while in motion. The housing is constructed along with a sealed blocking structure, to protect the eardrum from ambient noise.

Both in-ear monitor headphones make use of Sony’s proprietary audio-grade capacitors, once again intended to minimize distortion. And both the IER-M7 and the IER-M9 channel their sound through molded outer south path optimized for broad frequency response. The resulting resonance has an almost acoustic nature that’s a pleasure to listen to. 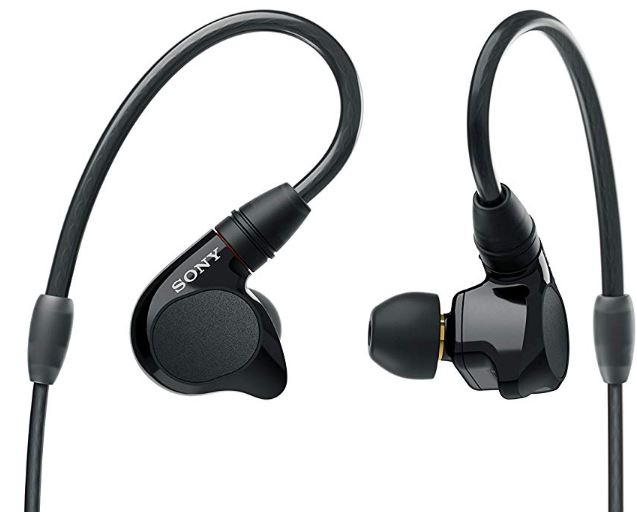 At the heart of audio quality is their balanced armature driver system. These unique drivers are physically composed of two structures. The most important is the T-shaped arm, helping to efficiently drive Sony’s high quality metallic diaphragms. The T-shaped arm in BA systems make use of a symmetrical vertical motion, which is essential for delivering linear response from each earbud. 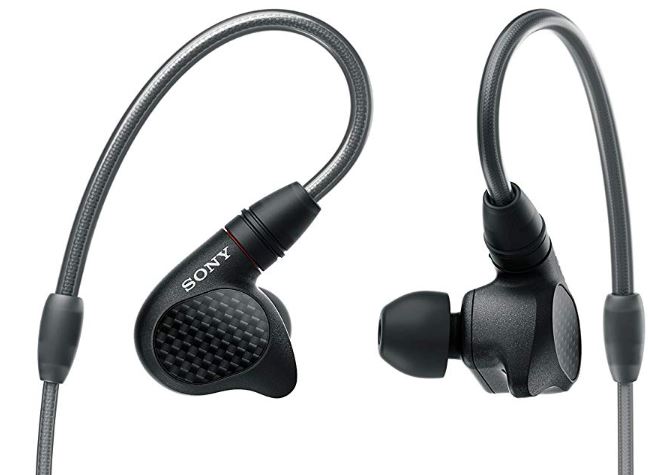 You want both buds to sound precisely the same. BA systems make that a bit easier. And both the IER-M7 to the IER-M9 make full use of BA drivers, giving them a somewhat similar a signature sound.

After trying a few pairs of in-ear monitors, it’s easy to get used to weak bass. Becoming accustomed to weak bass, it’s actually quite shocking to switch to either the Sony IER-M7 or the IER-M9. Although the bass doesn’t recreate the deep thumping which can only be produced with larger volumes of air, the bass is developed with a rich warmth. 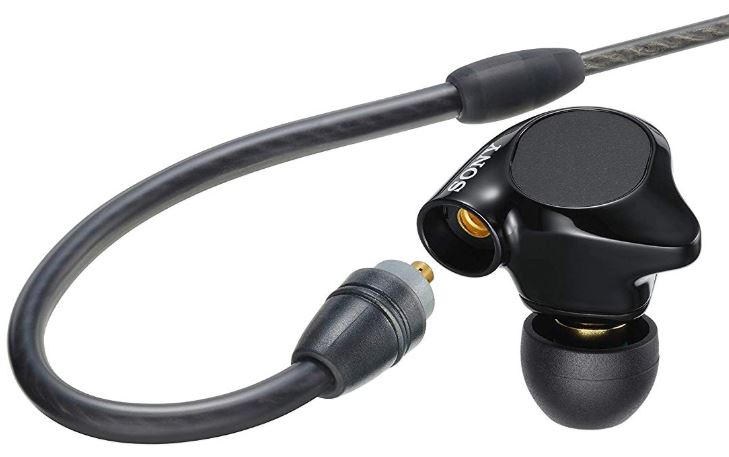 The M7 has fairly formidable treble performance as well, but it pales in comparison to the IER-M9. Given its own super-tweeter, the M9 is a specialist among specialists. As with its other drivers, the super tweeter diaphragm and its sound path are both composed of a magnesium alloy. It’s further driven with the help of gold-plated connection terminals, and silver-coated copper voice coils.

This additional bump in the treble range is perfect for bringing life to classical music, or making electronic songs a bit crispier. It’s an extension of what was already a fairly impressive treble range within the IER-M7. Used to create more detail, the IER-M9 absolutely exceeds one’s wildest expectations for efficient IEMs being used during a performance. 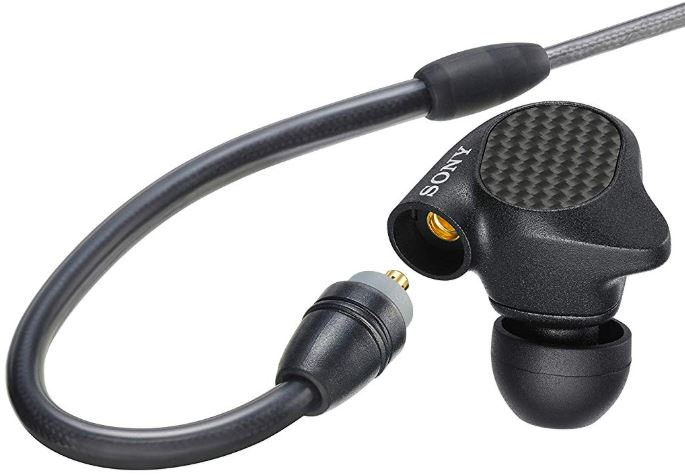 The IER-M7 and IER-M9 use the same cabling, as well. Both include a 3.9-ft silver-coated audio cable, terminating in an L-shaped gold-plated 3.5mm stereo plug. The external braiding of the cable is woven with a natural silk thread, working as an effective insulator against vibration and touch-noise in the cable.

The cabling is further built with a non-magnetic undercoating composed of gold plating, and a silver coated conductor in the interests of lossless sound reproduction. Sony also includes a second copy of the same cabling which terminates in a gold-plated 4.4mm audio jack. 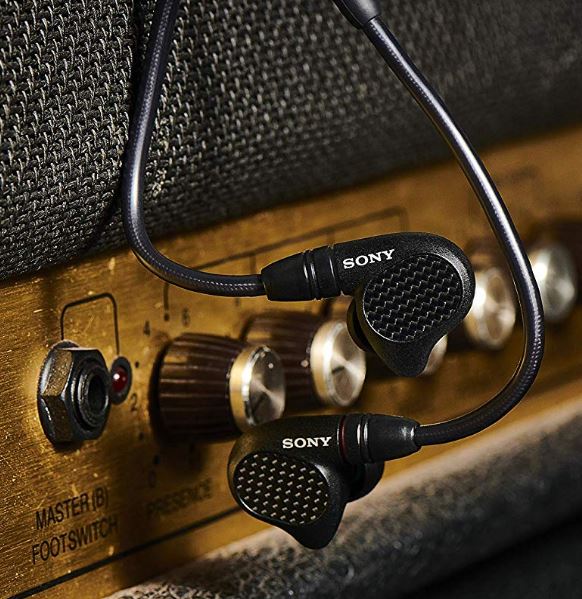 At the end of each cable, the wire makes a natural transition into a preformed ear hanger. It helps both with respect to comfort, and with respect to the longevity of this exceptionally fine cabling. When you’re placing the ear-hangers on your head, and you release the cable from your hands, the wire doesn’t awkwardly tug downward and forcefully adjust.

Another thing to note. In the interests of longevity, each cable will pop-off freely when placed under strain. If someone carelessly tugs on the cabling, this break-away design is supposed to allow both the cabling and the in-ear monitors to walk away unscathed. 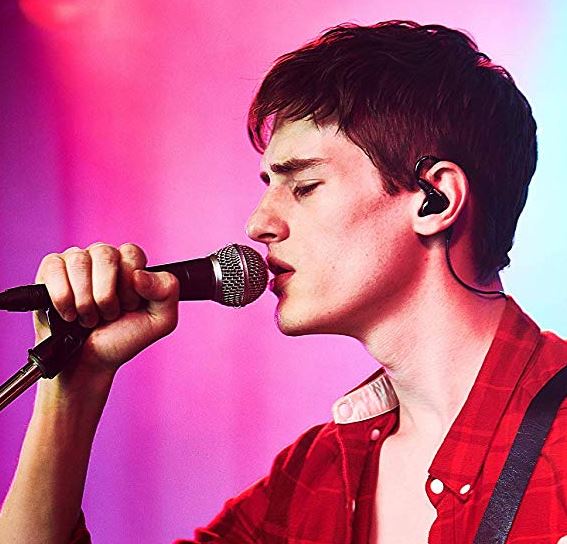 Both the IER-M7 and the IER-M9 have the same range of comfort options. You can find a total of 13 variations of the silicone ear buds: six types of triple comfort ear buds, and seven types of hybrid ear buds. When you’re looking for comfort from earbuds, variety ensures you can get a perfect fit. This appears to be another place where Sony’s ear-size research has paid off because finding the right fit is fairly simple.

Sooner or later, you’ll need to replace the tips. With the included set, you can put that off for quite a while. And he subtle difference between sizes and types which are included means if you’re feeling lazy, you may even be able to wear tips that are slightly off-sized. But keep in mind that these tips are actually quite important for effective noise isolation, and ultimately to the presentation of sound. 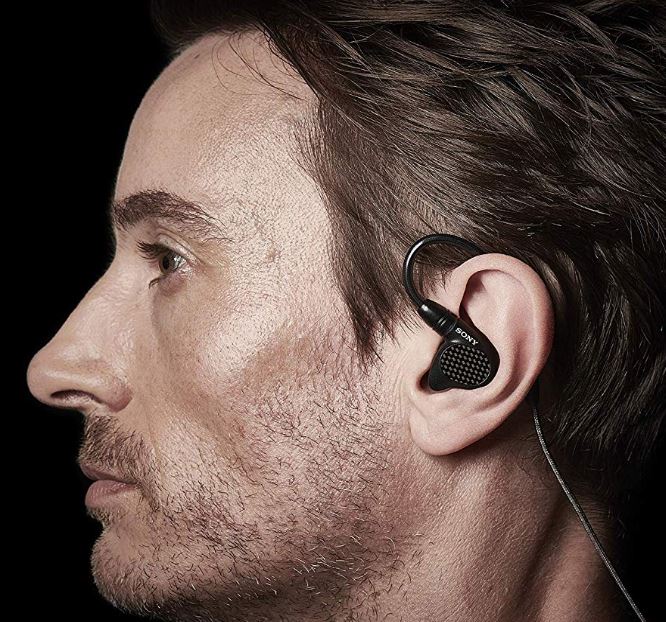 Another thing Sony’s been doing well recently is redesigning effective ear hangers. Sometimes using preformed ear hangers can be hit-or-miss, especially if your ears aren’t of average size. But Sony used their apparently extensive knowledge of the ear to craft their wire to be suitable for virtually anyone. The wire is willing to bend and move slightly, to better adapt to different ears.

Consequently, it’s pretty useful for keeping the buds in your ear without the weight of the wire tugging against them as you move. It keeps everything firmly on your head. The one exception here is children. It may be the case that the preformed ear hangers do not fit perfectly on child’s ears. Whoever is brave enough to hand over audiophile grade in-ear monitors to a child may be the first to find out. 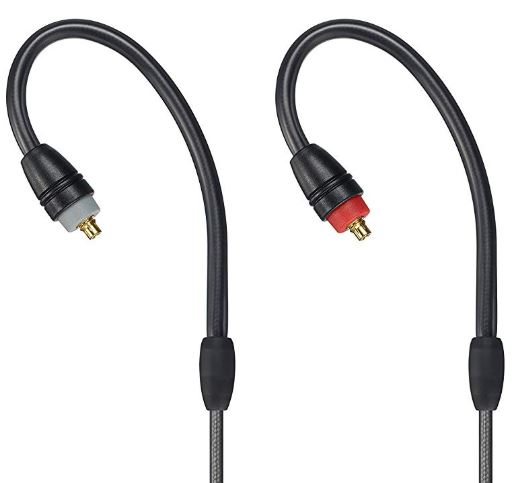 Both the IER-M7 and the IER-M9 support essentially any device with a 3.5mm or 4.4mm audio connection. The exceptions worth mentioning are mono Bluetooth headsets, and wireless dongle connections. Both are not supported.

One more thing to keep in mind about support. Both the IER-M7 and the IER-M9 should not be used with 3rd party cabling. Your best bet is using the included Sony cabling, or a replacement Sony cable. These wires are specially constructed with one-way current; it doesn’t necessarily play nice with alternative replacements.

Creating audiophile equipment is really about getting many, many details correct. That’s basically what Sony has done with these IEMs. Both render a truly acoustic setup, a kind of soundscape where space and imaging are allowed to thrive, where musicians can help feel the pitch and rhythm of each song.

The M9 exceed all expectations. It’s plausible they’re the best neutral IEMs on the market today. They manage to create a truly neutral presentation with equal support for male and female voices. When you’re listening to guitars and pianos the acoustic peaks and reverberation of the bass are all captured in exquisite detail.

Switching over to the M7, you’ll immediately notice a drop in detail. Nuisances in instruments are not quite as clear because you’re literally working with about 20% less definition in the sound. Nevertheless, that still means the M7 is about 80% of the M9, at about half the cost. It pushes a blissful sound that performs marvelously for both professional use and casual listening. 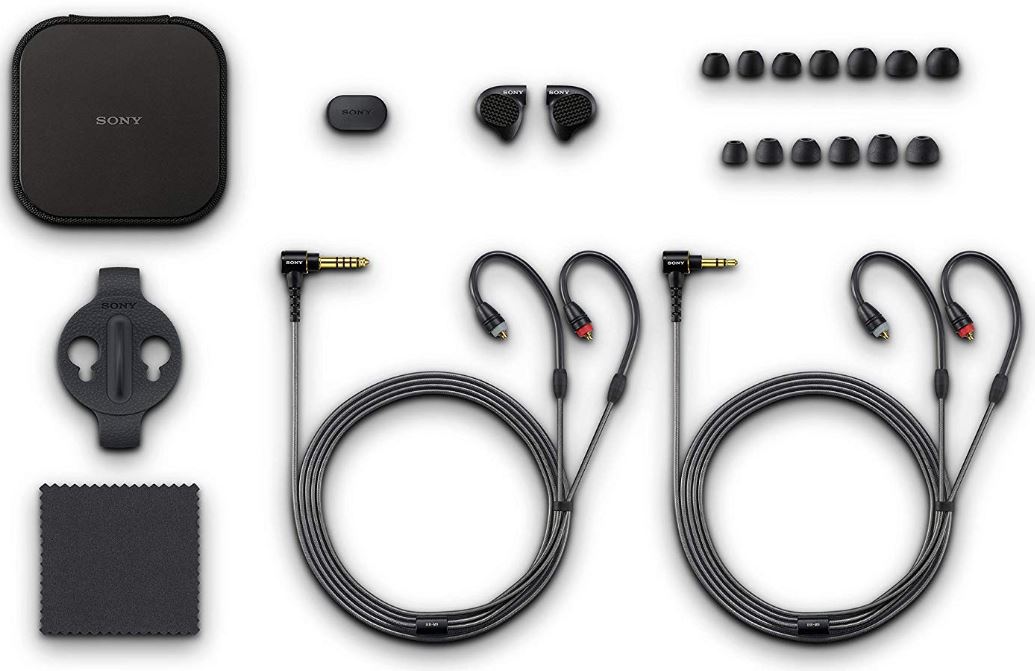 Both are excellent, almost beyond comparison. Choosing between them really comes down to budgetary constraints. Sony IER-M7 are almost half as expensive, which makes them the more pragmatic choice for someone who’s looking for a professional instrument. By contrast, Sony IER-M9 are for someone willing to spare almost no expense in the pursuit of flawless audio fidelity. It might be the best sound performance per dollar in existence.