When it comes to your home theater, the general consensus is that bigger is better. Just walk into any electronic store and look at their top tier entertainment systems. Chances are, you’ll find a massive 4K TV, powerful tower speakers, a huge pair of subs, and a number of satellite speakers distributed throughout the room.

We can certainly see the appeal. After all, who wouldn’t want to recreate the exact movie theater experience in the comfort of their own home? In theory, it’s the perfect system. But in practice, things don’t always work out that way.

If you live in an apartment, you’ll have to keep that volume dial on low to prevent annoying your neighbors. In your home, any family members or children that head to bed early aren’t going to be able to sleep when you’re putting your fancy new sound system to the test.

Sony’s RF995K Home Theater Headphones are one solution to a common problem. They promise to create that big theater experience you crave, without all of the problems that come along with it. Audio equipment designed for home theater is quite a bit different than equipment designed for music. There are many unique challenges that that aren’t easy to solve in a compact pair of headphones. Can they live up to the hype? We decided to find out. 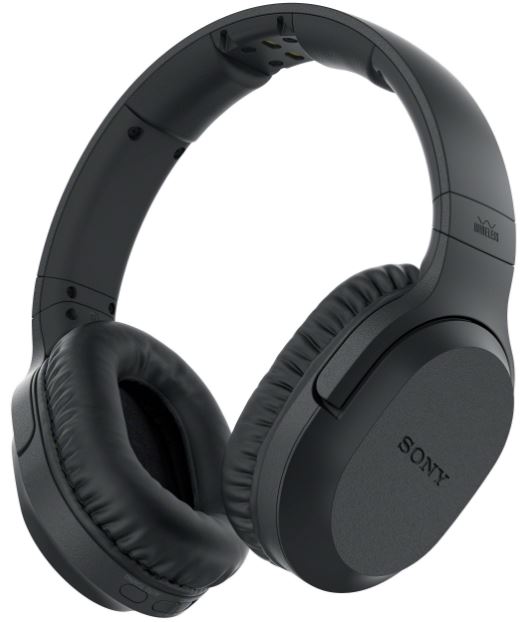 At first glance, the RF995RK headphones might not look much different from an everyday pair of Bluetooth headphones. But that’s where the core difference lies. They don’t use Bluetooth, but a unique 2.4Ghz wireless frequency designed to make them more adaptable. They support higher quality audio and a longer range, provided by the dedicated wireless base station. Despite having several features that give them the acoustic performance necessary for movies, they are designed to be adaptable so you can enjoy music as well. 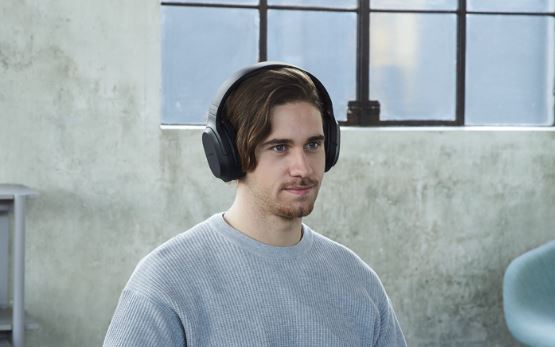 With their reserved design, they’ll look good in any environment. Lately, Sony has been gravitating towards an ultra-modern style with sharp lines and precise joints. With these headphones, they seem to have taken a few steps back. From the sharp border around the earcup to the straight edge around the side of the headband, they have a very clean look to them. But they’re much more rounded off. The bracket that connects the earcups to the headband is smoothed out with virtually no gap, creating a sleek look to them. 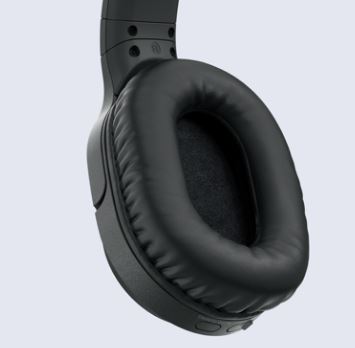 The soft plastic has a matte finish, which is almost professional in appearance. When not in use, the wireless base station serves as a hanger for the headphones. Although simple in design, this helps them become an integral part of your home theater. In our eyes, their ability to blend in creates a much more cohesive look, something that many consumers will appreciate.

The controls are almost hidden, located on the bottom of the right earcup. There is a volume knob which is easy to adjust with your hand, and effect switch, and an “auto tuning” button, which we’ll get into shortly. 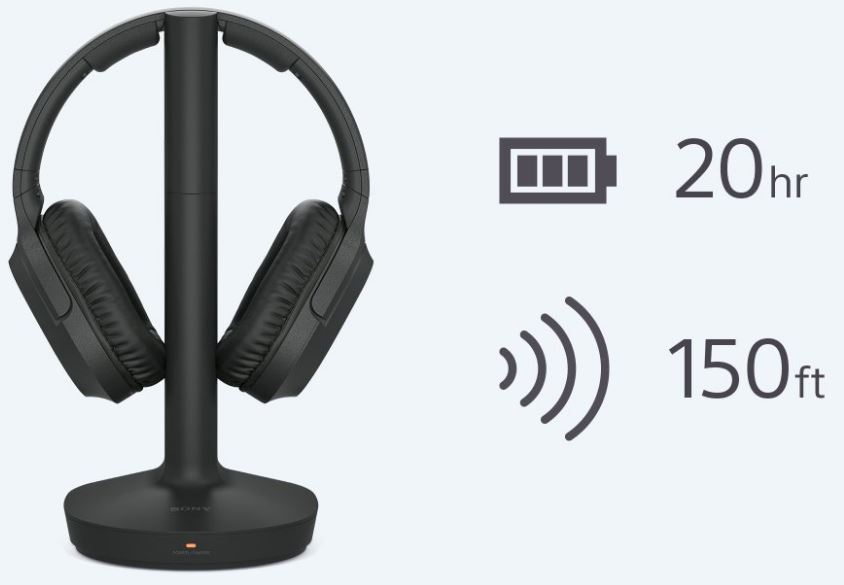 With their incredibly plush earpads, the Sony RF995RK’s are definitely more comfortable than what we were expecting. One major part of this is the fact that they are quite lightweight. They sit nicely on your head, and no pressure is applied to any spot in particular. They are just tight enough to get a good seal, so the audio doesn’t leak out into the room around you. But even if you’re wearing them for an extended period of time, you won’t find yourself frustrated with them.

Although wireless base station headphones were popular several years ago, it’s been a while since we’ve used a set. The base station should be set up next to your television or amplifier. Through a 3.5mm or a pair of RCA cables, your audio source easily plugs into the back. They also require a 120V outlet to power the entire system. 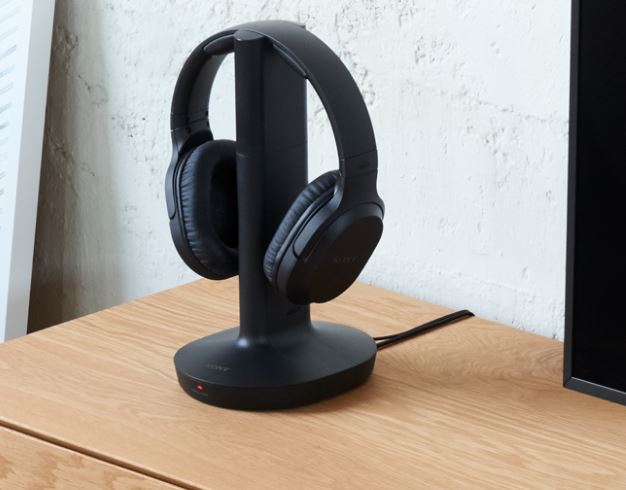 This base station doubles as a battery charger for when the headphones run low. The lithium ion battery inside lasts for up to 20 hours, so you won’t find yourself in need of a charge very often. With that in mind, since the base station also acts as a hanger, you’ll probably wind up leaving them there when not in use.

This simple design means that these headphones are much easier to use than Bluetooth models. You simply turn them on and listen.

From the moment we put the Sony RF995RK’s on, we knew that they were very different from the types we’re used to hearing. The most important thing with home theater audio is clarity. Sounds need to be reproduced accurately, and with precision. It’s important that one audible element doesn’t overpower the others, like explosive bass or dynamic treble. Movies often have a lot of different things going on, and the audio helps you tune into what’s important.

This can be very challenging for headphones. Sound is created by moving air, and loud sounds require a lot of air movement. For deep, pronounced bass, you need a large driver with a lot of surface area. However, that driver also has to be able to make very careful, articulate movements to get the accuracy and detail needed. 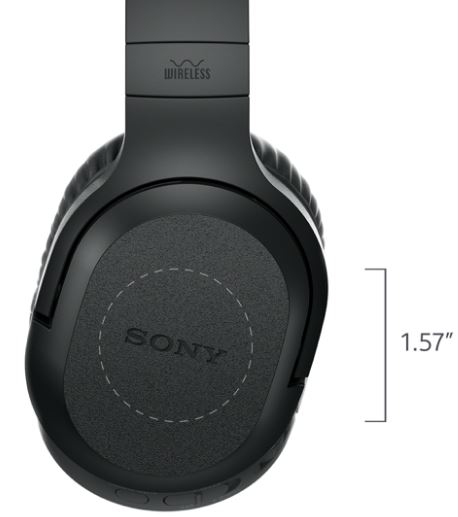 This is where the RF995RK really shine. They have a 1.57” driver, which is equivalent to 40mm. Like a studio headphone, they have a very flat response curve. They’re not coloring or tweaking the sound to suit certain music styles, they just play it back with precision and accuracy.

We found that this was most noticeable with voice. Speed sounded natural, organic, and raw. By the same token, the headphones did a great job of recreating synthetic sounds like explosions, background music, and atmospheric sound.

If you’ve had the opportunity to listen to a high-end home theater before, you know just how much high quality sound can draw you into your show. Sony clearly understands what it takes to produce that kind of audio, and they didn’t disappoint us. 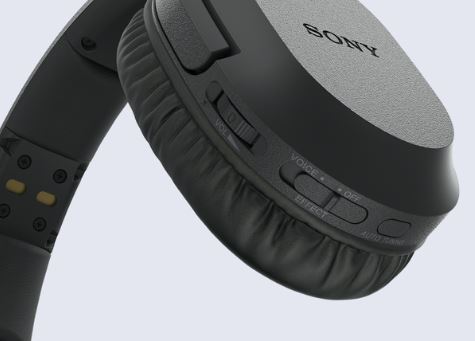 The purpose of these headphones is to allow you to enjoy your movies without disturbing anyone around you. But the opposite is also true. With their built-in noise cancelling, you’ll near nothing except for what you want to.

Watching the news? Just flip the switch on the bottom of the earcup to ‘voice.’ This adjust the sound response specifically for any media where you want the voice to be highlighted. It adds a ton of clarity to the sound, giving you a more relaxed listening experience.

Dishwasher just kicked on? Deliver truck idling outside your house? The Noise cancelling system is designed to be very conservative, but sometimes it will need an adjustment. Just hit the “auto tuning” button and they’ll recalibrate to cancel out new environmental sounds.

One of the most unique features is their proprietary wireless system. Anyone who’s used Bluetooth headphones before knows that they usually start to cut out as soon as you leave the room. With this model, you get up to 150 feet of range. We were able to get reception even when we were on a different floor, or a few rooms over. With this range, we’d recommend them to anyone who wants to throw on their favorite music or a talk show while they do chores around the house.

While there are several key benefits to the unique wireless system used, it does restrict where you’d use them. We could see ourselves wanting to take these headphones with us on a walk or bike ride, mainly due to their excellent noise cancelling system. However, they’ll only work with their dedicated base station, restricting their use to within your home. 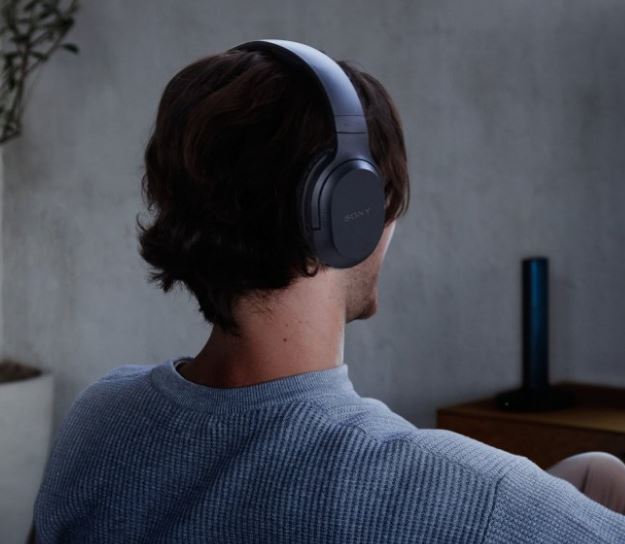 If you wanted a pair of headphones to enjoy movies and television, Sony’s MDR-RF995RK is a great choice. Their unique sound signature is perfectly suited for recreating the acoustic environment the director wanted, putting them a step ahead of any other Bluetooth headphones we’ve tried.

Combined with their excellent noise cancelling and unique voice filter, we definitely thing that Sony is on to something with this line of home theater headphones.

If you want to enjoy the occasional song, they’ll still sound pretty good. But they aren’t really designed for that purpose, and there are better option on the market. For music, we’d recommend checking out our review of Sony’s MDR-XB550AP. They’re quite affordable, and create a very engaging musical environment.