When you’re planning on taking a long flight, or if you are required to be the daily victim of public transportation, noise canceling headphones can be a god send. There are only so many private conversations you can eavesdrop in on before the novelty wears off. Full immersion is important for people who don’t want any distractions. Though, there are certain situations where blocking out all noise is not appropriate.

It’s pretty common these days for people to listen to music or podcasts at work. Unfortunately, headphones can sometimes isolate coworkers to the point of deafness. If you’re in a social or professional environment, being unreachable is very inappropriate and potentially dangerous. The problem is that consumer electronic companies are so focused on keeping distractions out, that they’ve forgotten that sometimes you need to let some noise in. If you want to listen to media and be an active participant at your workplace, the options have become pretty limited, but Sony has designed a pair of earbuds which might just fix the problem. 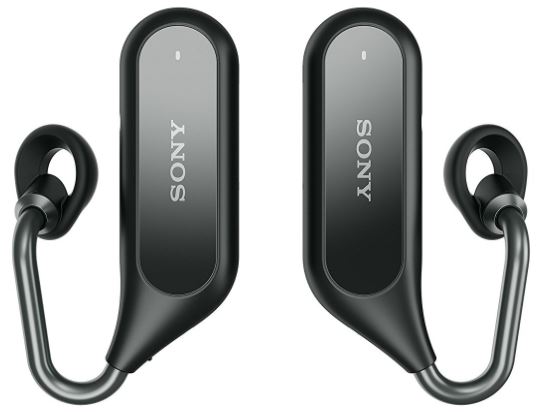 The Sony Xperia Ear Duo true wireless headset is a pair of earbuds that are engineered to keep you in tune with the rest of the world. The Xperia’s ergonomic architecture is designed to keep your ear canal open to external noise, while still partitioning enough room to provide simultaneous high-quality audio. Sony has also packed in some added bells and whistles to keep even the geekiest of listeners satisfied, such as smart head gestures and automatic volume adjustment. Over the past week we were given the opportunity to take the headphones out for a test run to see how they really measure up to the needs of our busy lives.

The first thing we noticed when we took the headphones out of their packaging was their very unique design. The Xperia headset doesn’t look like any other set of headphones we’ve ever seen. They are pretty bulky, with most of the heft fitting under your ear lobe and behind the cup of your ear (the heftiness is there for a reason which we will get into later). The ear buds themselves have a circular design with a large hole in the center. It sort of reminds us of those Dyson bladeless fans, except miniaturized and not nearly as sleek. It is this unique design that allows external noises in, while still allowing you to listen to your music. 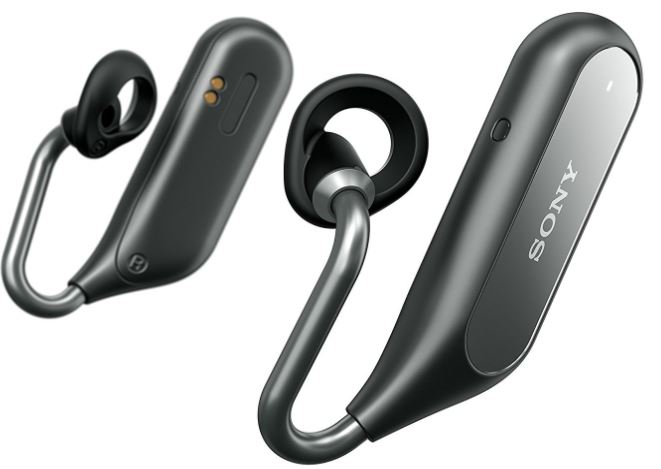 Their strange design results in an interesting fit which feels like they are hanging from your ear holes. This odd fit creates the illusion that the buds are going to fall out of your ear at any second, and yet you can feel that they form a pretty secure fit by jiggling your head around a bit. The fit is disorienting until you become used to it, which does admittedly take a bit of time. After we had become accustomed to the slightly weighted feeling, it felt like they weren’t even there. The true wireless design made coping with the fit easier since there wasn’t the added obstacle of dealing with a wire. 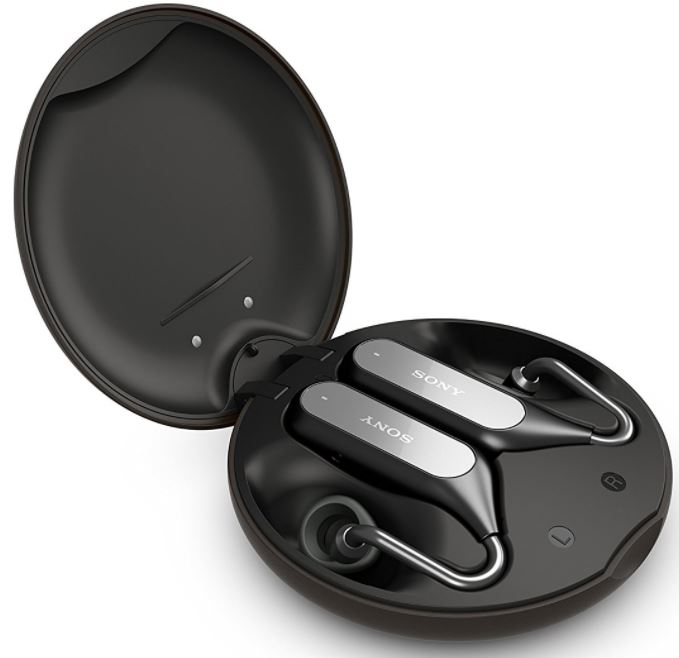 The open design is disorienting when you first use it. When you first listen to the music, you might be surprised at how quiet they sound. We came to realize that the volume level was something of an auditory illusion. We are not used to hearing so much ambient noise with other headphone models, so it seems as if our brains automatically assumed that the volume level was lower, even though we could consciously hear the music at a manageable level. Having a conversation with someone was an even weirder experience.

The best way we can describe the experience is like this; you know what it’s like to have a conversation with someone while you’re watching TV? The sound is still clearly heard in the background, but it’s not at the forefront of your attention. The experience of using the Xperia Duo headphones is very similar. The result is that the sound has a sort of disembodied aura. It’s not necessarily unpleasant, but it is a sound that takes some getting used to. 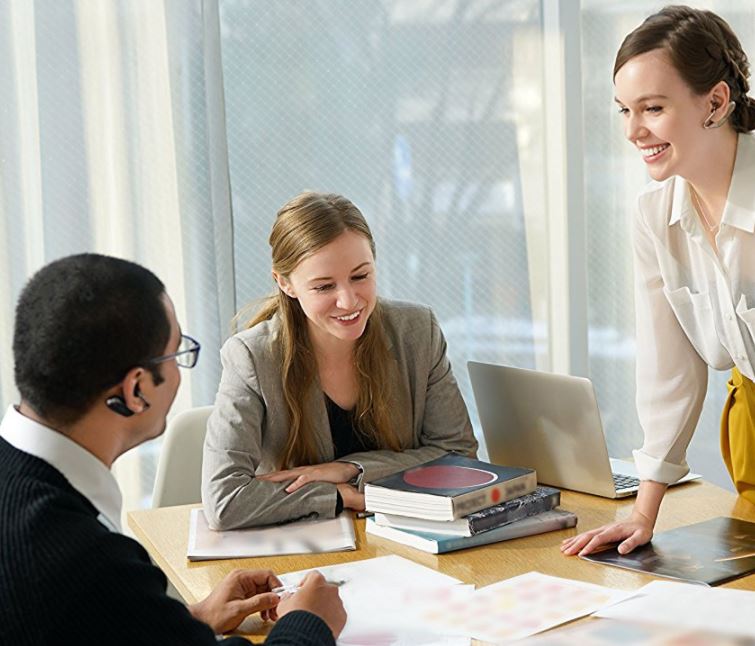 One of the coolest features of the Xperia Duo headphones is the automatic volume adjustment. Not only does the actual hardware design make these buds convenient for daily living, but the integrated software creates an even more optimized experience by automatically adjusting the volume depending on the noise level of your surroundings. We were skeptical at first that this feature would measure up to our expectations, but the algorithms Sony has developed are very intuitive and did a great job of adjusting to our needs without us having to worry too much.

If you’d rather not have the headphones adjust the volume for you, Sony’s manual volume design is very simple. Because of the Xperia Duo’s long design, Sony was able to integrate a touch and swipe volume system that feels natural in a world where we are surrounded by tough technology at all times. Our superior fingers have evolved past the point of pressing buttons. You can also use the long control pad to use the integrated voice controls. The headphones contain four isolating mics which allow you to effortlessly connect with some of your favorite services, including Siri and Google Assistant. We only used these headphones with an iPhone, but we can attest that its Siri integration was seamless. 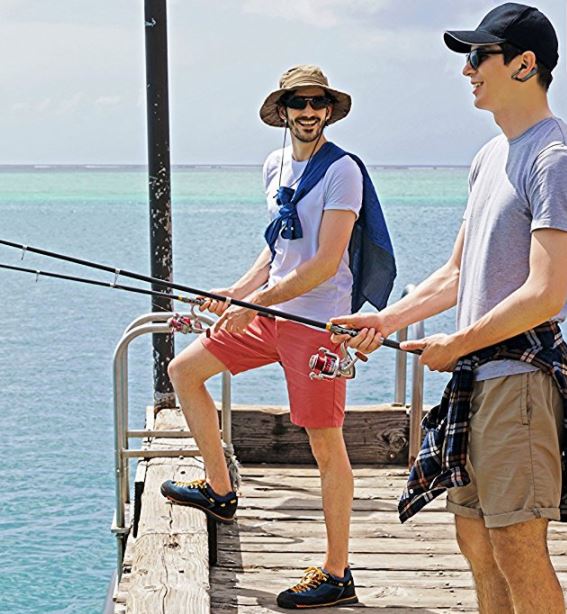 Despite their large size, we can’t say we are overly impressed with the length of battery time offered. With such a relatively large piece of headphone gadgetry we’d expect the listening time to exceed the four hours which it offers. The stand-by time is 22 hours, which is decent, but four hours just isn’t enough to get us through our workday. If we want to try and stretch the lifespan of the Xperia Duos to reach a full workday, we’d have to charge them during our lunch break and hope for the best.

Apple’s AirPods are much smaller and offer longer battery life. True, they don’t contain have the Spatial Acoustic Conductor built in, but the Xperia Duo is just too large to ignore the battery life issue, especially when true wireless headphones are beginning to offer more and more battery life.

There is a silver lining though. Included with the Xperia Duo headset is a quick charge case which contains up to an additional three full charges. According to Sony, a 7 minute charge is enough for juice for an additional hour of active listening time. In a pinch, the 7 minute quick charge is a good option to keep your tunes chugging along. It might sound silly for us to be stressing over the several minutes we’d have to go without our music, but anyone who works in a tedious office job will tell you that their headphones are one of the things that keep them sane throughout the day. 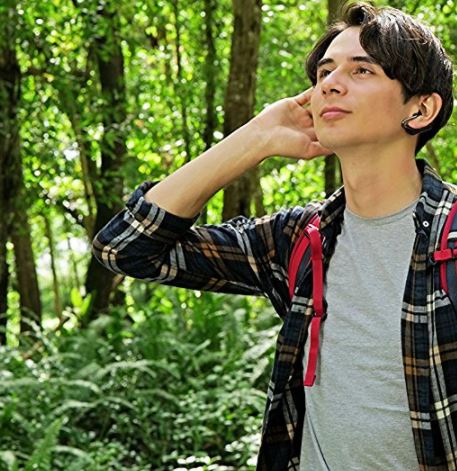 Let’s talk a bit about smartphone integration and head gestures. Connecting the Xperia Duo headphones to your smartphone allows you to control several features included with the device. First off, head gestures. Basically, head gestures is exactly what you would expect. They allow you to control your device by doing certain movements with your head. While these head gestures worked really well, they weren’t are cup of tea, not because of poor performance, but because the gestures made us look pretty silly in public.

If you don’t mind looking like you have some sort of nerve disorder, or if you have a private cubicle or office, the head gestures are kind of neat, but even when we were using them on our own we found ourselves peek around corners to make sure no one was watching us. The head gestures are yet another feature which you must become accustomed to before it feels natural.

The Xperia Assistant feature, although unnecessary in a time when every smartphone comes equipped with their own flavor of personal assistant software, is a fine alternative for anyone looking for an additional option. The Xperia Assistant is comparable to a watered-down Siri or Google Assistant, reading your text messages, keeping you up to date with your tasks and calendar, and using location-based technology to keep you updated on certain information depending on where you are. For example, when you are pulling up to work, the Assistant would remind you that you have a meeting in the afternoon. 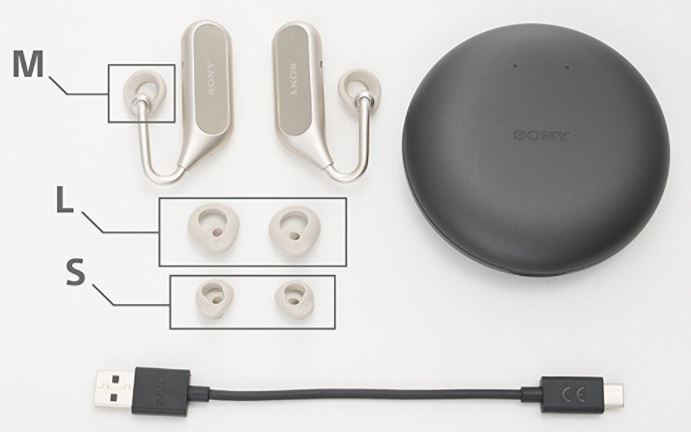 All in all, the Sony Xperia Duo true wireless headphones were an interesting experience. They definitely live up to their promises by allowing you the best of both worlds: listening to your music or podcasts, and being able to interact with the rest of the world. While the design isn’t the greatest we’ve ever experienced, and the sound quality isn’t going to blow you away, there is nothing unpleasant or negative we can say about these headphones. They do their job and they do it well. Just give yourself some time to get used to them and you’ll be happy you did.

We’ve become so isolated. The need for constant stimulation has resulted in society tuning out the rest of humanity. We have willfully withdrawn our social skills like the head of a turtle retreating into the safety of its shell. Technology like the Sony Xperia Duo headphones should be embraced for its attempt at drawing us closer together and making us more aware of the world that is constantly churning around us.