If I’ve said it once, I’ve said it a thousand times: The Clapper is the most revolutionary consumer electronic of all-time. Ask your Grandmother. She’ll agree. And Grammy is always right… always. Society has been dreaming of wireless lighting control since the 1980s. Can you really blame us and our aching joints? They just don’t make hips the way they used to. The Clapper was the answer to our Grandma’s prayers. Why miss a second of Matlock if it isn’t necessary?

Must-see legal dramas aside, we don’t think any Grandma, no matter how hip they might have been, could have predicted the direction that light switches were about to take. Imagine telling your early-90s Granny that in thirty years she would have a smart light switch with a woman named Alexa inside of it. We know our Grandma well—while her reaction probably would have sounded something like “that’s nice, dear,” in her big old Granny brain she’d really be thinking along the lines of “this dude is on drugs.”

Well, Grandma, you’ll be happy to know that even despite the drugs, your favorite little boy was right and not merely suffering from a psychotic break. Ecobee is not new a new entrant to the smart light switch scene. As a direct competitor to the popular Nest line, Ecobee has consistently released quality smart light switches and thermostats. For our money, Ecobee is the better hardware manufacturer of the two. With their new Ecobee Switch+, the lightening hardware mavens have once again upped their game. 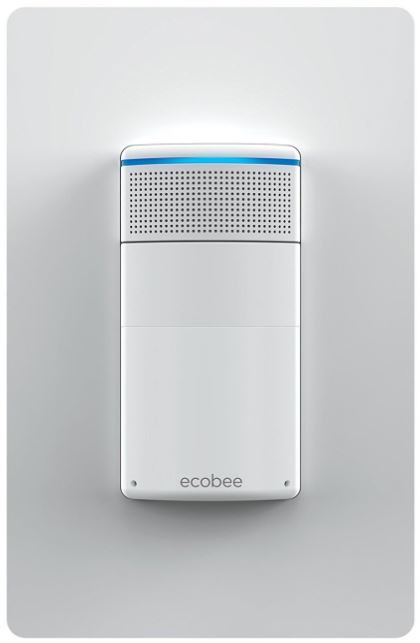 The Ecobee Switch+ offers similar base features as their Ecobee4 thermostat, but at a much-reduced cost. This device is designed for people who are perfectly happy with their thermostat, but might still want to get involved with the smart light switch scene. Along with smart motion sensors and ambient light controls, the headliner is the Switch+’s speaker and Alexa integration, which allows you to communicate with your Alexa device even when you are in another room. Instead of screaming at Alexa at the top of our lungs like we used to, it’s nice to go a day without losing our voice, thanks to the Switch+’s Alexa interplay. 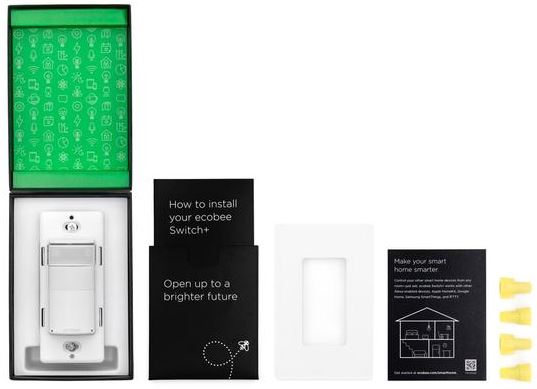 Whenever we have conversations with people about smart light switches, their biggest concern always seems to be the installation. It’s true, any sort of electronic work can seem daunting, and to some, downright dangerous. People are rightfully wary about playing around with loose and exposed wiring. In their defense, Ecobee has done a great job of including easy to follow installation instructions with their Switch+ device.

There are also multiple video tutorials detailing how to install Ecobee light switches. Basically, installation is as simple as turning off the electricity, tracking down a screwdriver (which for some people might be the hardest part of the process), removing the current switch, connecting the Ecobee’s line, load, ground and neutral wires, attaching the face plate, and then turning the electric back on. Don’t forget to put your screwdriver away in a place you’ll be able to find next time you need it (you’ll thank us later).

While the Switch+ is compatible with Google Assistant and Apple’s Siri, the star of the show is clearly Amazon’s Alexa, which is no surprise considering that Amazon’s Alexa fund contributed over $60 million for Ecobee’s most recent round of funding. Connecting with Alexa as is as easy as downloading Ecobee’s smartphone app, which seamlessly does most of the work for you. Once your light switch and your Alexa are connected, you have successfully transformed your room into an Alexa hub. 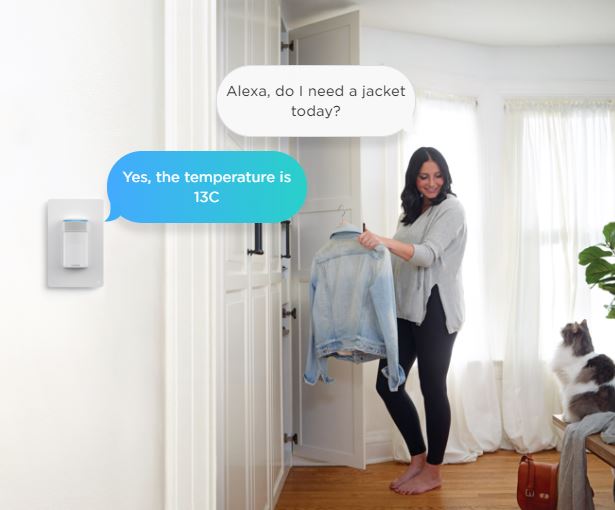 If you’re anything like us, you’ve made a habit of having conversations with your light switches. Everyone does it. We just never expected that our light switches would be able to talk back. Speaking with our Switch+ was just like speaking with our Alexa device itself. You can command Ecobee’s device to play music, add tasks to your calendar, brief you on the news, or even to give you a foot rub. Alexa will probably balk at the last command, but a man can’t help but try. Just like Echo devices, the Switch+ features a blue LED light that illuminates when it is listening to your commands. We’re hoping that by the time the smart switch ships, we won’t have to worry about it mysteriously laughing at us.

The Switch+ seems to have a very good range. We tested our model in a rather large room and it clearly translated our commands from corner to corner. We had some voice command issues when we tested the device’s range from the corridor outside of the room which held the Switch, but that is to be expected considering that most voice command gadgets are less effective when used through slightly ajar doorways. Think of the Switch+ as an Amazon Echo Dot with lightening control.

The Switch does not yet support any compatibility with Ecobee’s thermostat devices, so temperature control, for the time being, is off the table. Ecobee claims that temperature control will be added with a firmware upgrade later in the year, which will be a huge selling point for people who are already using a Ecobee smart thermostat. Tentatively, you can expect a major firmware rollout in the summer. 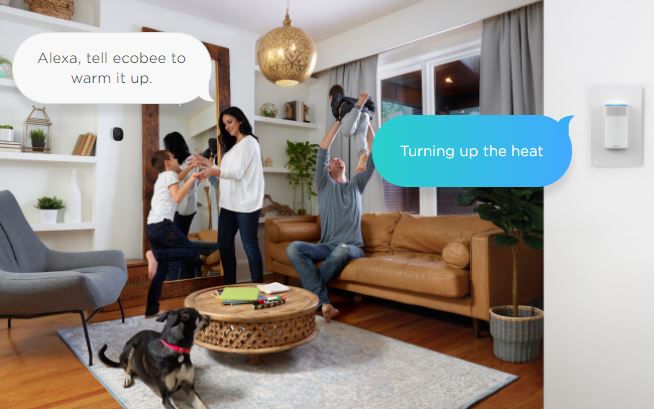 All of the hardware for temperature control is already included with the Switch+, so you won’t have to purchase any additional devices, but the software is still not quite there. Once the new firmware is rolled out, Switch+ users will be able to monitor the temperature in individual rooms, rather than being limited to the single ambient sensor which monitors only the temperature in close proximity with the thermostat. This allows you to keep track of the rooms you populate the most.

The fact that Ecobee is not rolling out the Switch+ with temperature controls already included seems to us like a logistical mistake. The smart light switch market is perpetually becoming more and more clogged with devices. Ecobee seems hell bent on releasing their newest smart switch before the competition, even if the product is not complete. Don’t get us wrong, once the updated firmware drops, the Switch+ is definitely going to stand out from the crowd, but for the time being, the promise of a temperature sensor might not be enough for some people to make the jump. In our opinion, this would be a mistake. The Switch+ has all the makings of an essential piece of smart home hardware. It just might take a little patience to be able to fully enjoy the device’s capabilities. 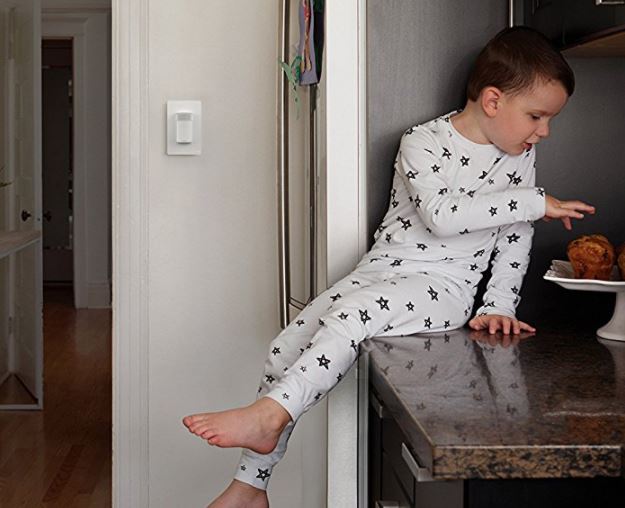 One of the features that people love most about their Alexa devices is its ability to play music on command. The Echo devices are known to have satisfactory sound quality, but what does music sound like coming out of a light switch? Would you be surprised if we told you that it sounds surprisingly good? We can’t say we were expecting much because, dude, it’s a light switch—but the Switch+’s sound quality is comparable with that of the Echo devices.

The clarity is not going to measure up to the standards of an audiophile (not that any audio source lives up to their standards anyway), but it’s perfectly satisfactory for casual listening and background noise. We find that classical music helps us think, so we often ask our Alexa devices to play classical music for us while we work. The Switch+ gives us more freedom to use voice commands in multiple rooms of our home, without having to grab the Echo on the way. So far, the Switch+ only features native support for Amazon’s Music service, but Spotify support is on the way, which is huge news if you much prefer the competition. 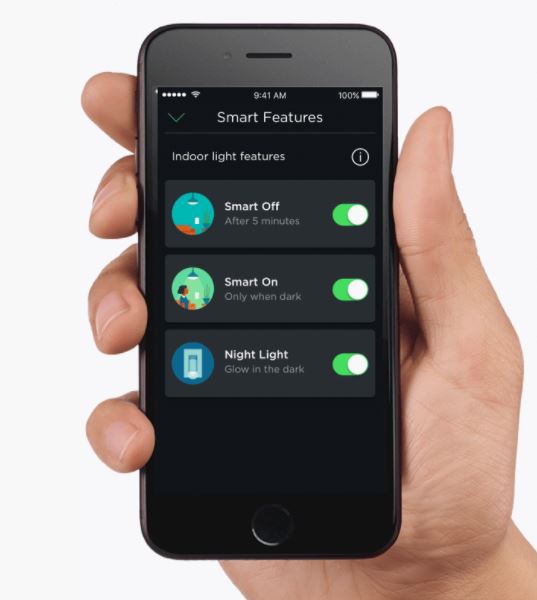 The Switch+ also features light sensors which control the lighting as you walk through your home. This is particularly helpful for families with children and young teens who are perpetually leaving the lights on, racking up your electric bill in the process. The Switch+ can also sense when there is enough natural light in the room, saving even more energy, but don’t worry, you do not have to rely on the motion control completely. The device also allows you to control the light via voice commands or even the old fashion method of pressing the physical switch. Ecobee’s smartphone app allows you to control the various lightening features such as the motion and sun sensors and the night light feature, which makes the Switch glow a pleasant shade of LED blue.

If you’re using multiple Ecobee devices, each of the Switch+ contains a technology called ESP, or Echo Spatial Perception. ESP is a smart system which pinpoints the Echobee device closest to you so that not every device in your home is listening to the same command. This is essential if you want to avoid any conflicting commands. Asking your Echobee to play you a tune wouldn’t be nearly as productive if different songs began playing in every room of your house. Bad, Alexa! Bad girl! 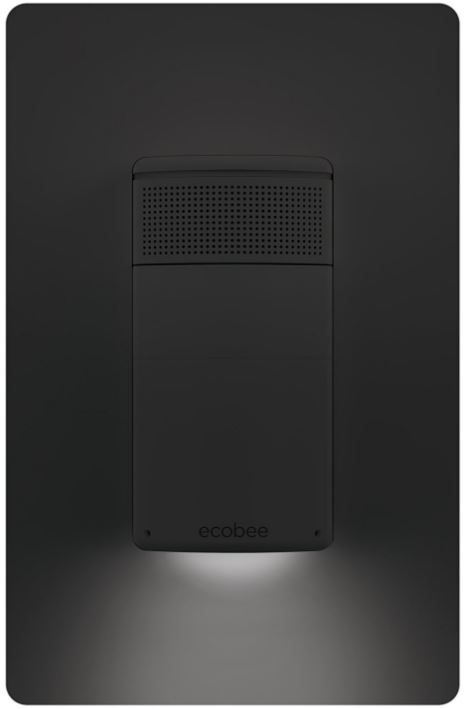 One thing you’re going to want to keep in mind is that the Switch+ doesn’t support light dimming, at least not yet. For those of you who swear by using a light dimmer to set the ambiance, you might want to look else ware, at least until Ecobee finds a way to add dimming through their firmware upgrades. This is an understandable deal breaker for some people, but it didn’t make a difference for us, since we have never used light dimming in our own home. We were happy enough with the other features that the one feature that is missing didn’t make much of a difference. 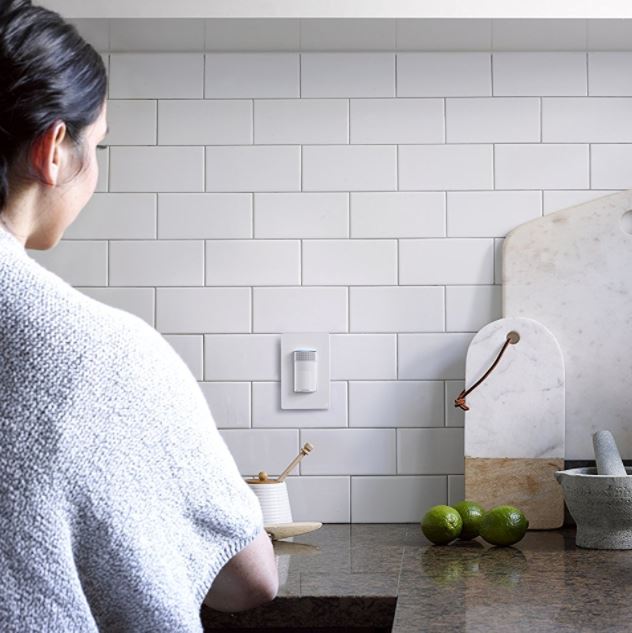 The Ecobee Switch+ is an affordable and feature-rich smart light switch which will change your life. We never realized how much of a pain it was to get off the couch, or unfurl ourselves from our comfy bed, just so we could turn off the lights. Grandma had it right all along. The Switch+ is The Clapper for the next generation, except now when you talk to your light switch, it’s going to answer you back. All in all, we definitely recommend making the jump to the Ecobee Switch+, especially if you already own an Alexa Echo device or any other Ecobee products.