With the image sensors in cellphones quickly catching up to the ones found in digital cameras, many consumers are catching themselves creating professional looking video using their Android or IOS device. But even if the clarity, resolution, and saturation of the video produced is high quality, there is still something missing.

Think back to Jack holding Rose at the bow of the Titanic, Neo dodging bullets in the Matrix, or the beacons being torched in the Lord of the Rings. What do all of these scenes have in common? Despite a lot of motion going on in the scene, the camera remained smooth and stable for the duration of the shot.

No matter how good the image stabilization is in your camera, it’s just not possible to create the same effect while hand-holding your phone. Professionals use a video stabilization system. While the Steadicam Volt isn’t the first smartphone stabilization system on the market, it’s got a few key features that give it the potential to be the best. Volt’s KickStarter campaign was shooting for $100,000, and yet they raised a million. What’s all the hype about? We decided to find out for ourselves. 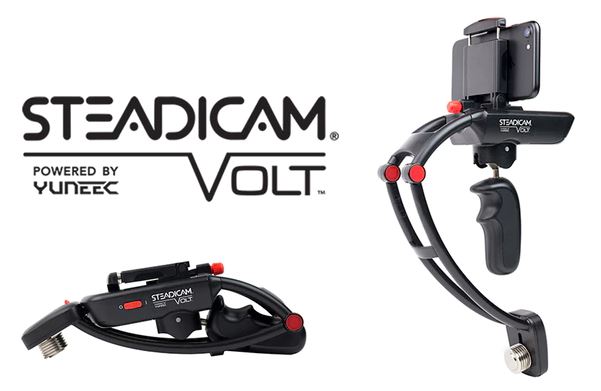 What, exactly, does the Volt do? First, you clip your smartphone into the holder on the upper portion of the bracket. You then hold the Volt by the handle, which is ergonomically shaped to fit your hand. From here, all you have to do is shoot. You could run down the street at top speed, walk up a large set of stairs, and travel around any way you like. The Volts careful balance of physical and electric stabilization systems makes sure that your smartphone remains steadier than the hands of a sculptor. For Steadicam, this technology is nothing new. They created the very first Steadicam in 1970, revolutionizing filmmaking. But the Volt is quite a bit different than their professional model, so let’s go in-depth and see what it’s made of. 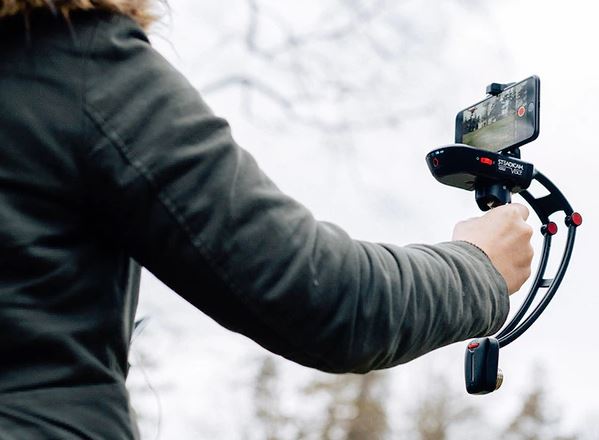 When we saw the Volt for the first time, it’s size was our first surprise. When folded up, it occupies very little space at all. The handle folds forward, the counterweight backward, and the holster lays flat on the base. It weighs less than a pound, so you’re not going to have any trouble holding it.

Once it’s all folded out, inserting your phone into the holster is very straightforward. Just like using a selfie stick, you’ve got to open up the spring-loaded clip, insert your phone, and release. The rubber ends hold the phone very securely, so you don’t have to worry about it falling out.

From here on out, you’ll interact with the Volt through the ergonomic handle. There is a cutout for your finger, and it’s very comfortable to hold. You’ll want to hold it quite tightly, as the camera will shift through the pivot point above. That is pretty much the only way you’ll need to interact with the volt, although there is a button on the back that can change modes.

Above the button is three LEDs. These will tell you whether you are in sport or cinema mode, and the condition of the battery. 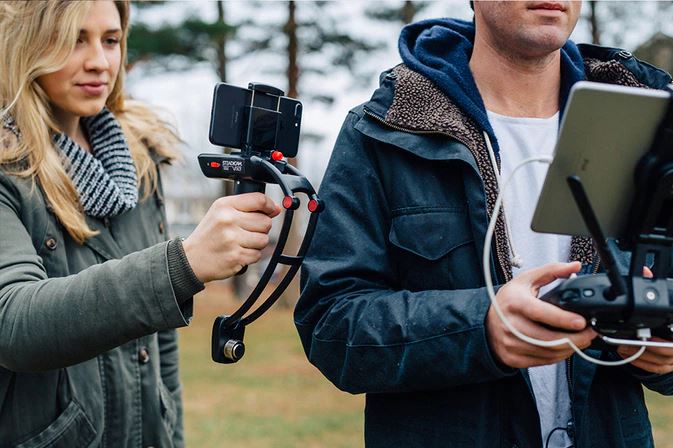 Once you understand how the Volt works, you’ll see why it’s such a revolutionary tool. Most video stabilization systems on the market use three different motors, each facing a different angle. This allows it to control the motion along the X, Y, and Z axis. These motors are programmed to ensure that transitions are smooth, consistent, and scalable. Whenever you move your hand, the system measures this movement and recreates it in a way that follows its rules. For simple shots, this creates some pretty smooth video. But it doesn’t look very natural, and the video has a tendency to lag. If you were to snap your hand quickly in one direction, it would take a moment for the movement to follow.

The other type of stabilization is gyroscopic. A large counterweight is added to a handle with a gyroscope inside. The gyroscope keeps everything upright, while the counterweight is designed to smooth out fast motions. This is the system that was used in the 70s. It works pretty well, but of course there are limitations.

The Volt combines both of these systems. The gyroscopic stabilization gives movies an organic, natural feel to them. And the electronic components are designed to analyze movement, making small corrections as necessary.

This is most evident in the demo videos. In one, two employees toss an object between them. With the volt, the camera is able to make quick, precise movements to keep the object in frame, but the video seems natural and well executed. 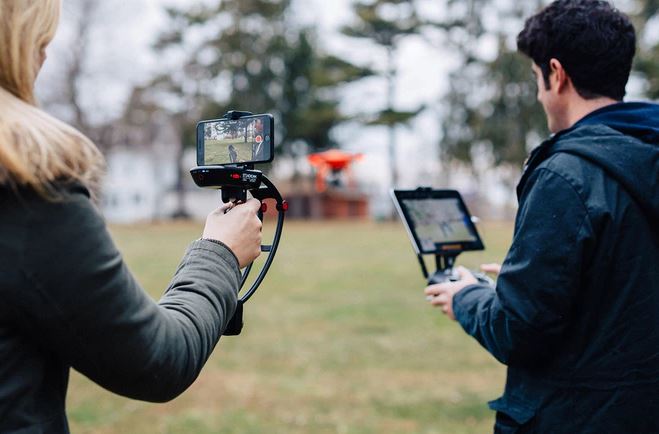 Thanks to the electronic stabilization mode, the Volt is programmable. This allows you to tweak the settings to suit different cinematic styles. You can choose movie, or sport mode. Movie mode is designed to be as smooth as possible. It assumes that you’ll have an idea what your subject is going to be doing, and the system cancels out quick, jerky motions in favor of a professional video feed.

Sports mode is still very smooth, but it acknowledges that your video is going to be full of fast paced action that changes rapidly. We found that it’s best to choose these modes based on the predictability of your subjects. Filming your pets playing? Sports mode will work best. A group shot during a hike? Movie mode will make an incredible difference.

We’ve got a pretty good idea of how it works, but I’m sure we’ve all experienced times where our purchases just couldn’t perform in the real world. Fortunately, this was not the case with the Volt. We expected a bit of a learning curve to use it, but it’s very much a ‘pick up and go’ device. The volt looks best when you film things naturally. It will cancel out any unintentional shakiness, while keeping your image raw and natural looking.

Because there is an electronic component to it, you will need to keep the batteries charged. The batteries last for 12 hours, so it’s not likely that you’ll run out during a shot. But in the event that it does happen, the Volt will still function using the mechanical stabilization system. When operating on mechanical only, it does take a little experience to understand how it will behave. But you could easily spend 30 minutes playing around with the power off, and you’d have a good grasp on it. 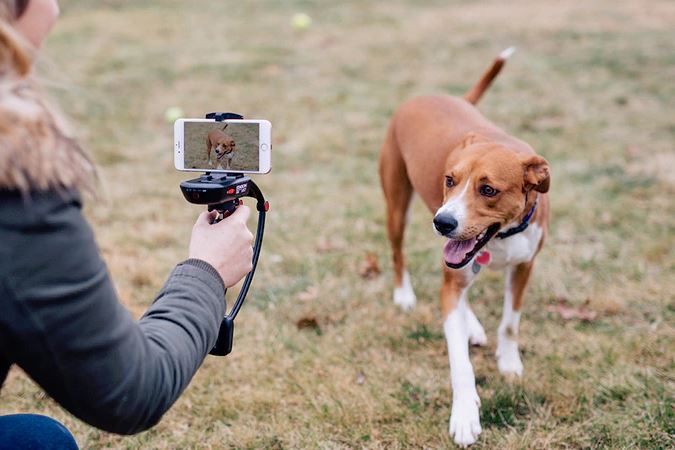 The Volt is compatible with any mobile phone that weighs between 100 and 250 grams. The maximum width supported is 85mm, which covers virtually every phone on the market. Even the iPhone 7 plus measures only 77mm. However, the weight limit could be restrictive. While there aren’t many phones that weight more than 250g, some are close. You might have to remove the case if you’ve got something heavy duty.

One of the unique features is the app. If you’ve got an Android or IOS device, you can download the free Steadicam app. This connects to the Volt via Bluetooth, and gives you some interesting settings. You can make the volt more responsive, smoother, steady it more along one axis instead of the other. Even more impressive, when you’re connected via Bluetooth the Volt will use your phones accelerometer to get a more accurate representation of your movement, improving stability.

As an added bonus, Steadicam will be manufacturing and adapter that allows the Volt to be used with a Go Pro. This will be provided to backers for free, but sold as an extra within a few months.

There is no doubt in our minds that the Volt will be able to take smartphone videography to the next level. For that reason, we’d have hope to see a version that was compatible with dedicated video or DSLR cameras, although there is no indication of that. For anyone who wants to use a professional video rig, unfortunately you’re stuck with much more expensive stabilization equipment for now. 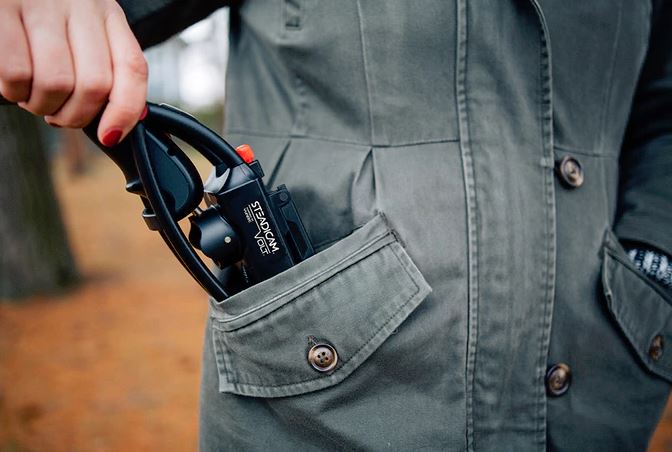 Whether you’re an aspiring YouTuber, of you just want to spruce up your family videos, the Steadicam Volt can have a massive effect on how good your videos look. Consider how big of an improvement optical image stabilization caused. The Steadicam Volt is like that, times ten.

The ability to change the settings through your smartphone really opens up doors. Even though you can pick it up and use it right away, these settings give you a lot more precise control once you’ve got some experience.