The moment you want to do something more advanced than turn on your stream, run into problems. Whether you’re trying to run a professional-quality stream, or you just want more than bare essential customization options, what you need to solve the problem is a game capture device.

While mostly known for their game capture software, VIDBOX recently released some fairly impressive game capture devices. The VIDBOX GCDK1 and the VIDBOX GCDU1 are both clearly intended for game capture, but it’s worth noting their versatile abilities apply just as well to streaming of nearly all types. 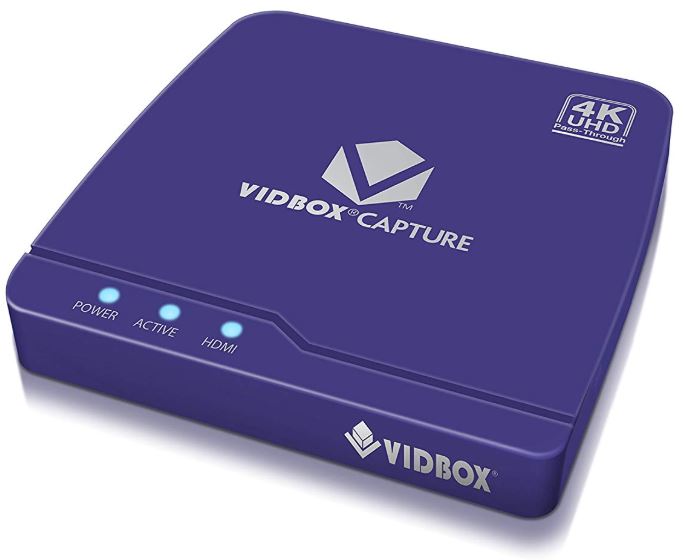 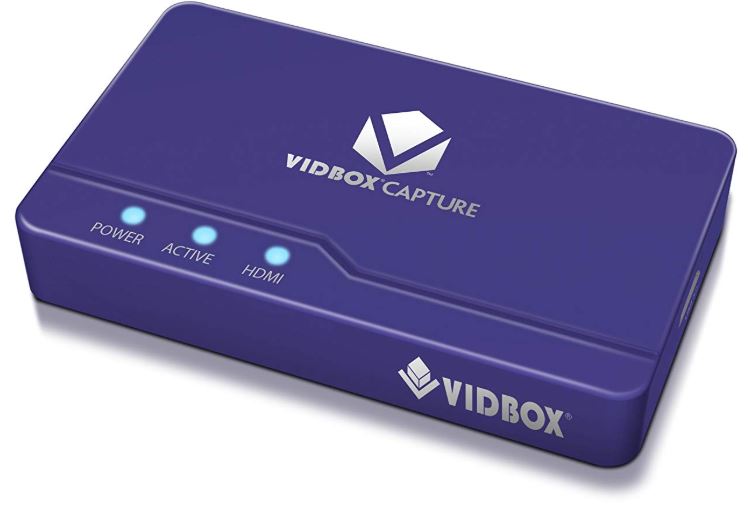 Beyond that, these capture devices are nearly clones of each other. More important than their obvious physical similarities, either VIDBOX Game Capture device will allow you to use a huge range of streaming programs. If you don’t have a preference for streaming services, or don’t have any streaming software at all, VIDBOX solves that problem as well.

The GCDU1 measures 4 x 2.4 x 0.7-inches. The GCDK1 is actually slightly bigger, measuring a little more than half-an-inch longer. Both are built with a bright purple chassis. The coloring is intended to produce a sense having a videogame style. It’s perhaps aesthetically most aligned with Nintendo equipment. But the UVC-based design plays no favorites with respect to compatibility, making both VIDBOX plug-and-play. 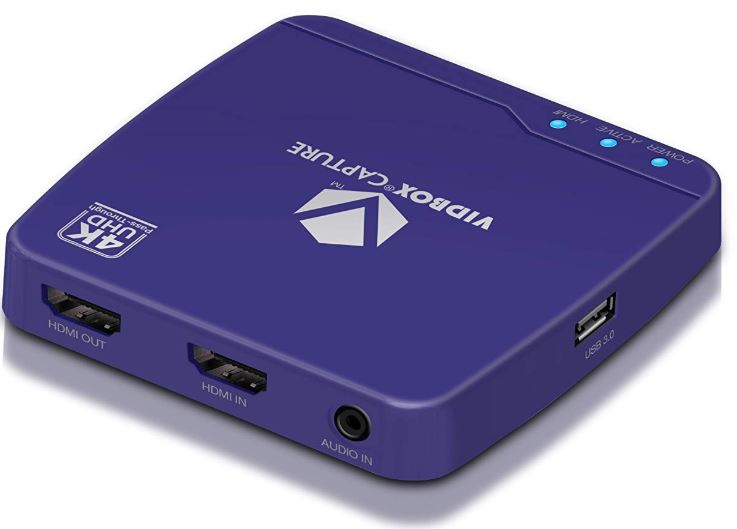 Both of the VIDBOX Game Capture boxes are littered with ports. Their front-side features only three LEDs. Those LEDs provide indications about the power, activity of the stream or video capture, and HDMI connectivity. Similar to using a router, they’re useful for quick diagnostic purposes. Run into some kind of issue? You can pin it down quickly.

Turning to the backside of the device, you’ll find two HDMI ports. One for input, and one HDMI out-pass port. On its right face, either VIDBOX Game Capture device connects to streaming devices with the help of a USB 3.0 connection. Do you want to do your streaming through a desktop PC? A laptop? A tablet? You can connect up with essentially any device that’s capable of attaching to USB.

Because the entire device is littered with ports, after you’ve completed setup, you’ll find either VIDBOX has quite a few wires running from it. The HDMI-out will be connected to a monitor or TV. The HDMI-in will be connected to your game device. If you don’t want to use VIDBOX’s streaming software, or want to use it on a separate device, you’ll be connecting a PC through the USB 3.0 port. And that’s just the hardware side of things.

As mentioned earlier, the GCDU1 and GCDK1 have more in common than not. They both have the same broad support streaming and recording. They both include the VIDBOX Game Capture app, and have the same wide compatibilities with stream sites and programs. They both support input/output resolutions supported are 1080p content played up to 60fps.

The slightly-lengthier GCDK1 contains a 4K UHD pass-through port. That lets you stream and record 4K content at 60fps. Additionally, there’s an audio-in port on the GCDK1.

Audio pass-through makes it possible to capture your own voice on the stream, or to direct your microphone through the streaming software without assistance from the platform you’re playing on. The audio port is positioned on the back-side of the GCDK1 along with its HDMI ports. 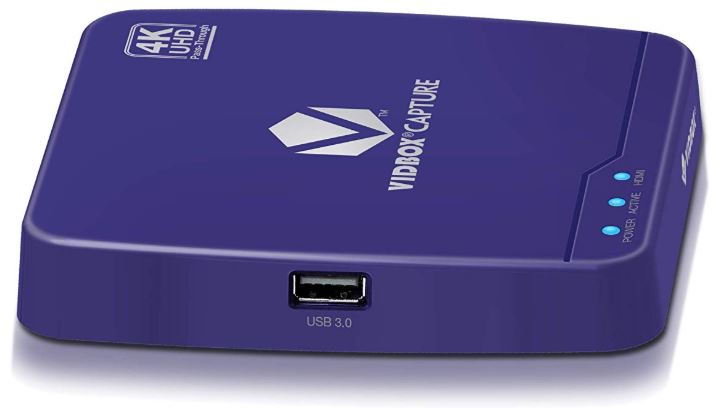 The best design decision VIDBOX made, for both the GCDK1 and the GCDU1, was providing extensive support for streaming software. If you don’t want to use their VIDBOX Game Capture software, you can make use of other common streaming suites. VIDBOX supports OBS Studio, OBS Classic, XSplit, and others.

But don’t be so quick to pass up the included VIDBOX software. It can make broadcasting and capturing a bit easier, especially if you’re a novice at streaming. While it’s not quite as thoroughly customizable as a program like XSplit, it does have quite a few unique options. For example, it lets you play with a picture in picture mode lets you view the editing software while you’re playing.

VIXBOX wide support for so many streaming services helps it to include both complex and simple software suites. Whether you’re looking for something easy, or looking to get hands-on with detailed customization, the support is there. Massively popular sites like YouTube and Twitch see full support, but so do networks like Facebook and Mixer. You can even simultaneously broadcast to multiple streaming sites.

With respect to its hardware, the UVC 1.0 connection is widely compliant, helping make for a plug and play device. You just a connect up with a Windows, Linux, Mac machine. The oldest supported Windows is Windows 8, the oldest macOS support is 10.12. If you plan on connecting with a PC, then you’ll have to match some fairly mild system requirements.

The VIDBOX requires your CPU have a 4th generation Intel i5 or greater, along with 8GB RAM. Additionally, keep in mind, you cannot use a USB 2.0 port to connect to the VIDBOX. This is one of those uncommon instances where you actually need to take advantage of the bandwidth differences between USB 2.0 and USB 3.0. Your old USB 2.0 laptop will not work.

The VIDBOX GCDK1 connects and captures PS4, Xbox One, Nintendo Switch. It’s compatible with Roku, Amazon Fire TV, Windows computers. It’s compatible with essentially any Apple device made in the past decade, and any Android device that can connect through HDMI. Support even extends to GoPro and DSLR cameras.

Gear like the VIDBOX is pretty durable. There’s very little mechanical action going on with this kind of device. As long as you don’t stick it in an oven, or smash it with a hammer, you can expect either the GCDK1 or GCDU1 to survive for years to come. When devices like this finally croak, it’s from one of two things. 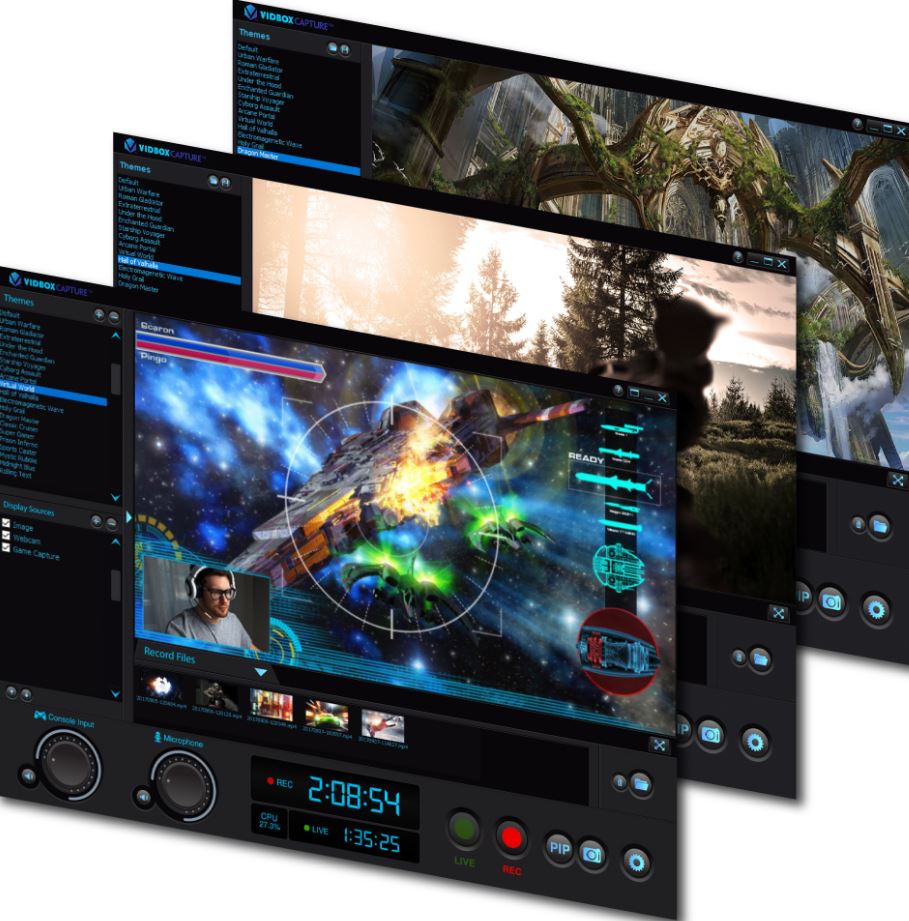 The first possible cause of death is aging format. At some point in the future, people might consider 1080p inadequate for gaming. A change like that could be plausible within the next two or three years.

However, for the time being, most people are still playing in 1080p. And even as resolution standards shoot upwards, bandwidth limitations will ensure that 1080p content remains the golden standard for streaming for years to come.

That makes the GCDK1 better suited for people who are recording 4K streams and uploading them to sites like YouTube. By contrast, it makes the VIDBOX GCDU1 a reliable piece of equipment that will probably continue to serve faithfully for all the years 1080p has left, whether that happens to be 3 years or 30 years.

The second thing that could eventually kill one of these VIDBOX Game Capture devices is physical wear-down of the ports. Take a look at any thumb drive. They’re built to endure something like 10,000 insertions. When you start to approach or exceed those limits, the drive begins to feel wobbly when you plug it in. Eventually that instability creeps into your connection, and that’s a wrap.

Fortunately, equipment like the VIDBOX GCDK1 is constructed to hold-up far better under those kind of pressures than a $10 USB drive. Most people will probably plug in their capture device and leave it for weeks, or months on end. They might plug and unplug perhaps 50 times per year. Given the sturdy metallic construction of both VIDBOX port portals, it’s quite unlikely this force will age-out the device.

Any established streamer probably has software they enjoy using. Something they’re familiar with, and maybe even have established hotkeys they’re used to. No small part of what makes the VIDBOX so impressive is you’re not required to use one particular type of streaming software. Moreover, there’s no additional driver installation. The whole experience is plug and play.

There are some things to keep in mind. If you want to broadcast to several sites at once, you’ll need an internet connection that can stand the bandwidth consumption. The same goes for 4K content. If you plan on streaming that content, a great capture device needs to be paired with a great internet connection.

Both the VIDBOX GCDK1 and the GCDU1 include a 5.9-ft cable for USB 3.0. They include a 3.3-ft HDMI 2.0 cable. It comes with a quick start guide, but you probably won’t end up needing it because getting started is about as difficult as plugging in 3-cords.

There’s plenty of things to like about the VIDBOX GCDU1 Game Capture. It’s got wide streaming support; it accommodates the resolution that matters most for streaming. Including support for 4K and audio-throughput adds about $50 to its price. Provided you don’t need to connect your microphone to the stream, the GCDU1 is a highly practical, economic choice for a game capture device.

By contrast, the VIDBOX GCDK1 is fully loaded with everything a streamer could want or need. Regardless of whether or not you’ll make much use of the 4K pass-through, the audio-in port can be essential for many streams. It’s not impossible to get around the audio port problem without having it directly on the GCDK1, but it’s another problem this capture device can solve for you. It’s the right choice for someone looking for hardware to make streaming a little simpler.